I recently saw that a few people had been sharing images of their equestrian books, and thought it might be fun to share my mule library with you. This is an entirely selfish post because I love sharing my book collection with others almost as much as I love inflicting … I mean, sharing … my music library with others.

(If you’re interested in some mule-themed songs you can check out this post, by the way. There are not very many. I have a larger horse-related Spotify playlist here)

However, it may be that some of these titles are unknown to you, and perhaps seeing this post will give you some new books to add to your wishlists. 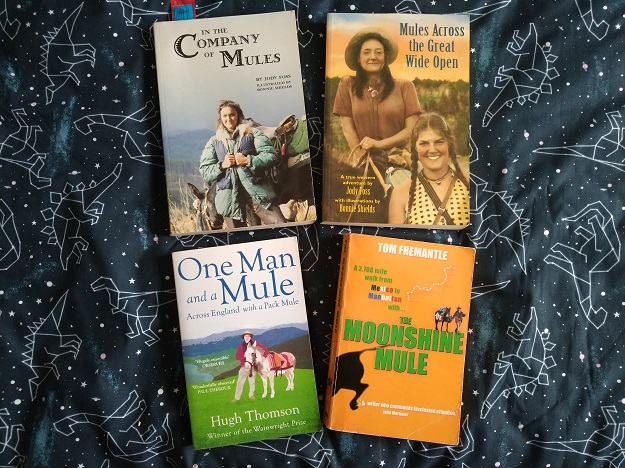 I think I have misplaced one or two of the titles from this genre – for example, I know I definitely have a copy of Eight Feet In The Andes somewhere. Perhaps I lent it to someone?

Mules Across The Great Wide Open and In The Company Of Mules are debut and sequel by lady longrider, Jody Foss. Mules Across… details the 1,300 mile ride by Jody and her sister, Debbie, from Utah to Washington in 1976.  In The Company… takes place eight years later in 1984, when Jody rode 700 miles from Idaho to Oregon with her two mules. Both are filled with brilliant insights into a quickly vanishing way of life.

One Man And A Mule by Hugh Thomson is the story of his journey across northern England in 2017, following old drover’s roads, with Jethro the mule as sandwich carrier – the intention had been for him to carry packs, but Jethro was less enamoured by this idea! As an aside, Jethro came from RSPCA Lockwood which I lived near to at the time.

The Moonshine Mule by Tom Freemantle is a (relatively) recent gift which I’m ashamed to say I haven’t got round to reading yet. In 2001 – just a few days before the September 11 attacks in America – Tom sets off to walk 2,700 miles from Mexico to Manhatten in the footsteps of his ancestor, Arthur Fremantle, a colonel in the Civil War. 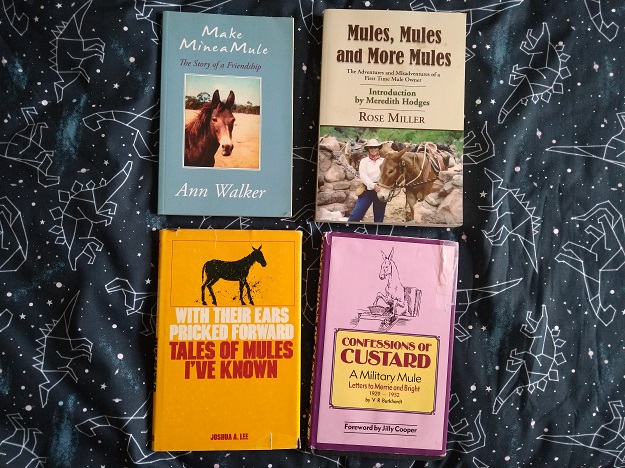 Make Mine A Mule by Ann Walker is the extremely sweet, endearing story of Pepita the mule and a friendship that spanned twenty-eight years. What I liked most about this book was that it was a ‘normal’ relationship which any one of us could achieve, and it perfectly displayed the incredible level of affection and near-telepathic communication that all mule owners will understand.

Mules, Mules and More Mules by Rose Miller is the story of her search for the perfect mule, and the many mules she encounters along the way. It’s been some years since I read this and I remember thinking at the time that she seemed to give up on mules very quickly; but then, if I lived in a country where good mules were plentiful, would I have persisted with Marty for as long as I did? I’d like to say yes, but there were definitely times when I would have happily given him away if only I could have been certain of where he’d end up.

With Their Ears Pricked Forward was written in 1980 by Joshua Lee, and is an absolutely fascinating insight into the role of mules on an early 20th century plantation in Georgia, USA. Unlike the previous two books in this section, these are working mules who had to earn their keep and, although there is certainly affection in the way the stories are told, not all the anecdotes are nice ones! Still, the author is an absolutely brilliant storyteller.

Confessions of Custard are the imagined letters from a real life military mule, stationed in Aldershot, Surrey UK (and later in Wiltshire), between 1929 and 1932. They are wonderfully illustrated and written by Colonel V.R. Burkhardt and I would recommend this addition to anyone’s library. 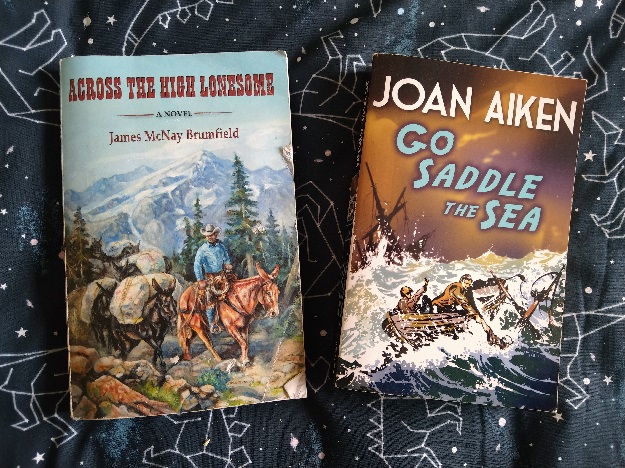 As I’ve written elsewhere, mules are sadly not as popular in fiction as their short-eared cousins which is why my collection is so small.

Across The High Lonesome by James McNay Brumfield, an experienced packer himself, is described as a “modern day Western odyssey” and follows the adventures of college graduate Molly on her first summer working for a packstation in California. I particularly liked that the story starts in a place called Lone Pine, an area I visited on my trip to the US a few years ago and fell in love with! The mules are also extremely well described and presented. Now, I have to confess that I didn’t actually finish this book as I wasn’t that interested in the romance storyline and I ended up moving on to other things; but that’s not a critique of the novel. The characters are great and the story well-paced, so if you like a little cowboy romance, this will be right up your street.

Go Saddle The Sea by Joan Aiken is the first in the Felix trilogy. I haven’t read the other two so can’t comment on whether a mule appears in them, but in this book Felix is accompanied for most of it by a trusty mule who I don’t think is ever named. Despite this apparent oversight, the mule is nicely three-dimensional and clearly written by someone who knew them. Go Saddle... is a children’s book, but an extraordinary one; I’ll link you to this fascinating blog post which explains the details clearly. 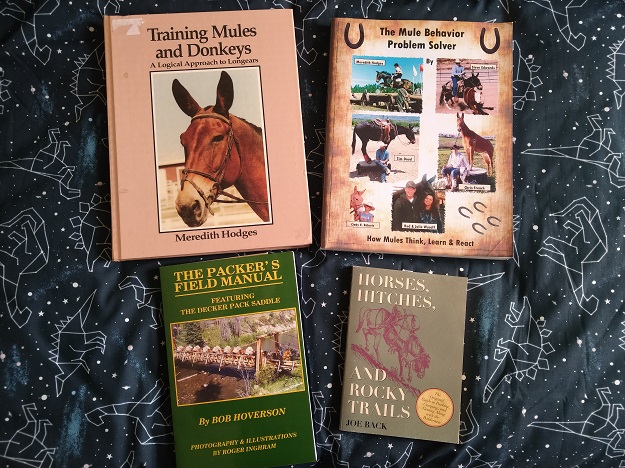 If you’re surprised by how small my collection of mule training manuals are – the bottom two aren’t even mule specific, I just include them in my mule library for relevance – then there are two reasons for this minimalism: one, good horsemanship is also good mulemanship and our horsemanship library is vast; and two, I have actually gained the most insight from reading anecdotes, such as those in my memoirs collection.

Training Mules And Donkeys by Meredith Hodges was printed in 1993 and is not necessarily the approach I would take, but there is no denying that Meredith is a huge font of knowledge on all things longear and this book still makes for an interesting read.

The Mule Behavior Problem Solver features content from a variety of big names in the mule world – Meredith Hodges, Steve Edwards, Cindy K. Roberts, Red Wycoff, Tim Doud – and is also not a book that I would necessarily follow to the letter, but it definitely provides some interesting suggestions and insight into why mules do things the way they do.

The Packer’s Field Manual and Horses, Hitches, And Rocky Trails are both excellent books to have in your collection if you’re interested in learning about packing. The latter is especially brilliant, a real gem of a book with wonderfully charming illustrations. 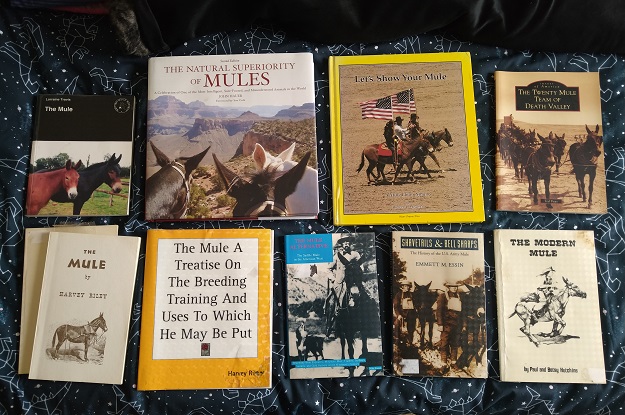 And now we move on to books about mules in general – many of these could also have featured in the Training section, though they are not purely about training.

The Mule by Lorraine Travis, the founder of the British Mule Society, is also the society’s unofficial handbook. It is an absolute must-have for all mule owners.

The Natural Superiority Of Mules by John Hauer is probably the most well-known of mule books, and with good reason – it’s an excellent compendium and is another must-have for your shelves.

Let’s Show Your Mule by Meredith Hodges was also printed in 1993 and as such is slightly dated, but for someone who knows zero about showing, showing mules, or showing mules in America, it’s still a great read with plenty of coffee-table worthy pictures.

The Twenty Mule Team of Death Valley by Ted Faye is a fairly short but excellent resource for those wishing to learn more about the famous Borax mules.

The Mule (A Treatise On The Breeding And Training And Uses To Which He May Be Put) by Harvey Riley is so good I appear to have three copies. Originally published in 1897 it’s one of my older mule books and is, as expected, very dated; there’s a fair amount of rough handling dealt upon these army mules, but it’s a brilliant resource all the same.

The Mule Alternative by Mike Stamm compiles quotes and photos from primary sources as he attempts to piece together the role of the mule in early American exploration.

Shavetails and Bell Sharps by Emmett M. Essin looks at the history of the US army mule, from the early 1800s through to World War II. A very well-researched book.

The Modern Mule by Paul and Betsy Hutchins was actually published in 1940, so it isn’t really that modern anymore. It still remains a superb resource. 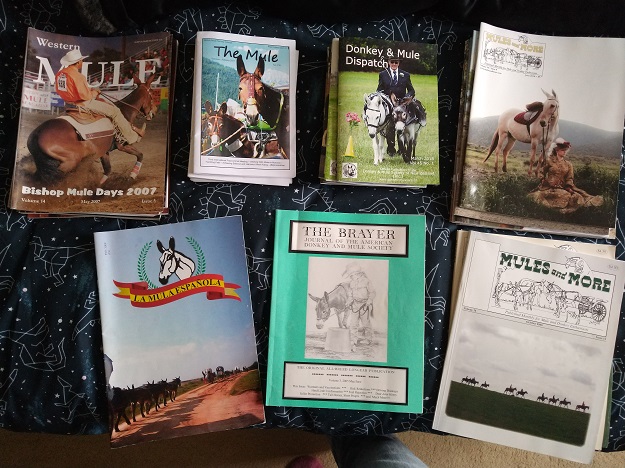 I don’t know if magazines, journals and pamphlets count, but by golly I’m on a role now so I’m including them regardless. Here is a sample of my copies of Western Mule Magazine, the British Mule Society Journal, the journal of the Donkey And Mule Society NZ, Mules And More Magazine, the journal of the American Mule And Donkey Society, and various mule related newsletters and pamphlets.

I stopped subscribing to Mules And More Magazine a few years ago because the cost of an overseas subscription was so prohibitive, but they’ve recently started creating a digital version which I really must get around to subscribing to! Sadly Western Mule still remains print only.