With Storm Hannah battering most of the UK this weekend, what better time to cast your eyes instead upon some pretty flowers I photographed last week.

I am endlessly fascinated by the little ecosystem that our farm contains. I’ve recently spotted both Mayfly larvae and Caddis Fly larvae in the stream, which are both good bioindicators for a healthy, unpolluted water source with a high oxygen content. During the heatwave in February, we were serenaded by a constant hum of insects in a way I haven’t heard for years – although sadly, when the usual February weather returned, many of the emerging insects were killed off. Our bottom field contains many types of grass, and is sprinkled throughout by Lady’s Smock – also known as the cuckoo-flower – which is the main food-source for orange-tipped butterflies. The top field, having been grazed down during our first weeks here and now left to its own devices, is gradually covering its most trampled parts in a carpet of Birdeye Speedwell.

With the planet in the state that it’s in, I wanted to record our wildflowers for my own benefit; but it also occurred to me that maybe some of my readers might like to see them, too. Here are a few of them.

Wildflowers On The Farm

This may be the first mule-free post I’ve made on this blog (excluding part one of us moving house). I won’t be making a habit of it, because generally mules are more interesting than anything else; but occasionally it’s a whim of mine to use some other subject as a means to bore people with, and I don’t have anywhere else to do so. This one is all about flowers … and some bugs.

The humble dandelion, often scorned. However, they are actually a very useful “weed” as every part of them is edible, the equines love them, and they provide an important snack for bees. The leaves can be eaten raw in salad or steamed, the flowers can also be eaten raw or fried, and the root can be used as a coffee substitute. Here are some dandelion recipes you might like to try! 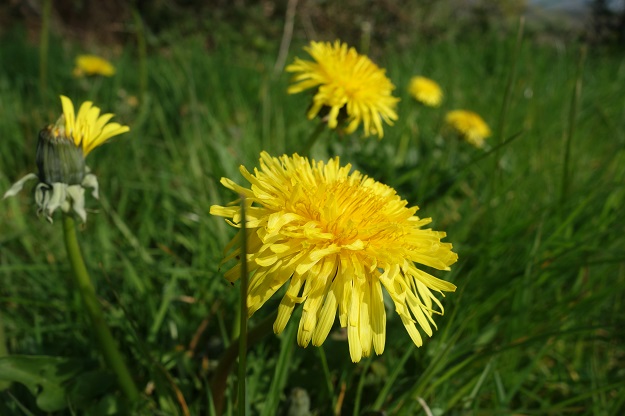 Another easily recognised flower, this one is definitely not edible – in fact it’s toxic to humans and other animals, including equines. Did you know that they are protected by law in the UK? It’s a criminal offence to uproot them. They are an easy way of identifying ancient woodland – our hedgerow along which these ones are growing is not ancient, but it is at least 300 years old. 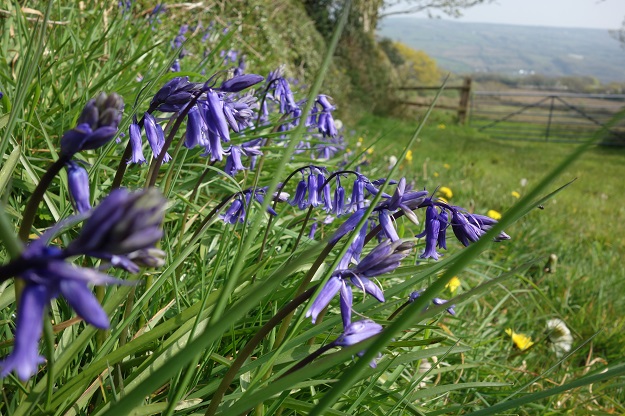 Shown here with violets in the background. I was super excited to find this one, although I only located two plants so I very much doubt we’ll get to eat any strawberries before the wildlife does. The flowers provide food for a huge amount of butterflies and moths. 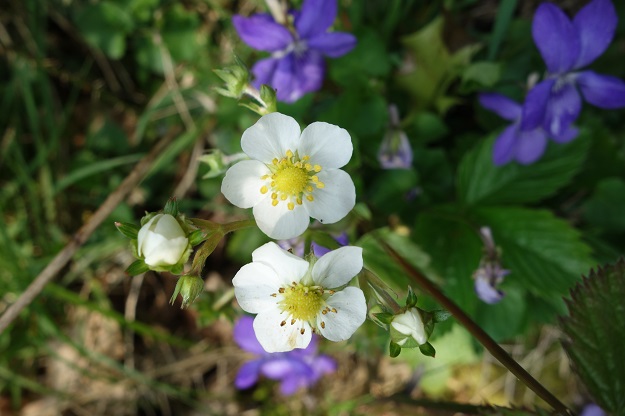 I was very excited as I thought this was another edible ‘weed’, but apparently only one type of Speedwell is edible and I don’t think it’s this one. Still, it’s incredibly pretty. 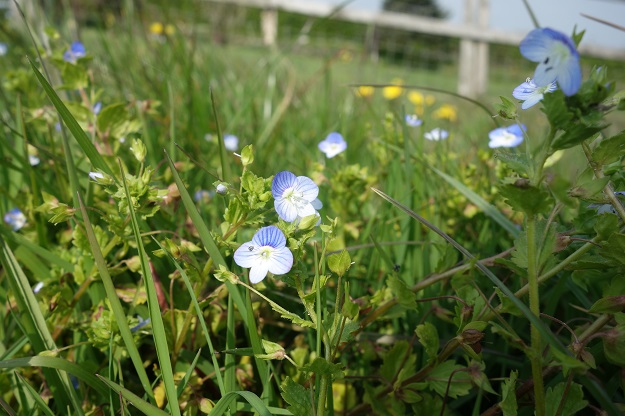 Another super pretty little flower, and one that has a lot of uses in folk medicine. You can also eat the leaves in salad or use them to make tea – despite the fact that one of its names is Death Comes Quickly! This rather ominous moniker is due to its association with the name Robert, which is a folk word for a tricksy, devilish sprite. A much less worrying nickname for this plant is Stinky Bob. 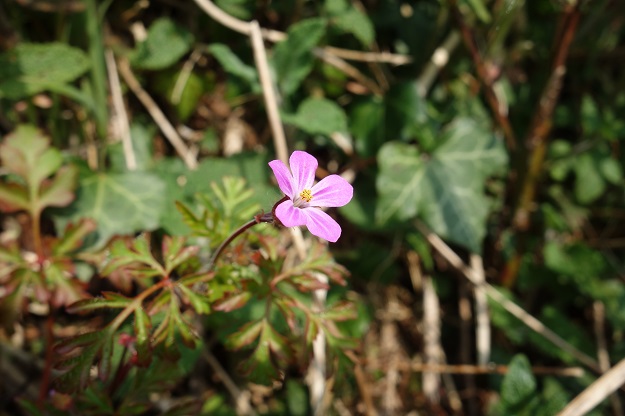 Interspersed here with Herb Robert, and looking a little worse for wear – all species of violet are supposed to flower until June, but I think ours peaked too early as by the time I came to take photos of them, they were all looking a bit sad and limp. We thought these were Common Dog-Violet, but apparently they don’t like wet soil so it’s more likely to be one of the types of Marsh Violet or Bog Violet … I can’t really tell. 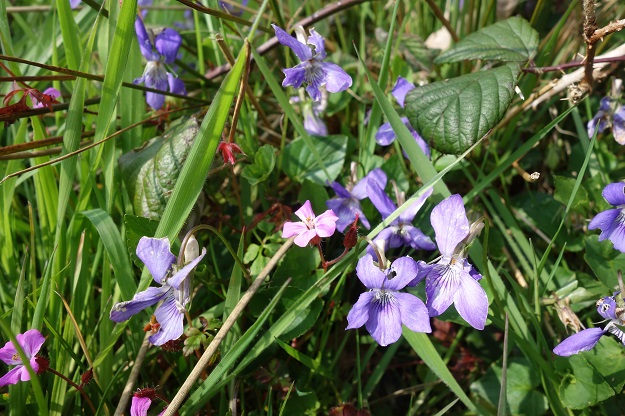 These seem to be our farm’s most abundant flower, especially in the bottom field. It is also … edible! Hurrah! I have yet to try them, but Wild Food UK describes their taste as “hot mustard or wasabi” for the leaves, and “cress with sweet and hot hints” for the flowers. Here’s an interesting recipe for making a “Monsawabi” sauce (thanks to this blog post I now know that the Welsh name for these plants is Llaeth y Gaseg). 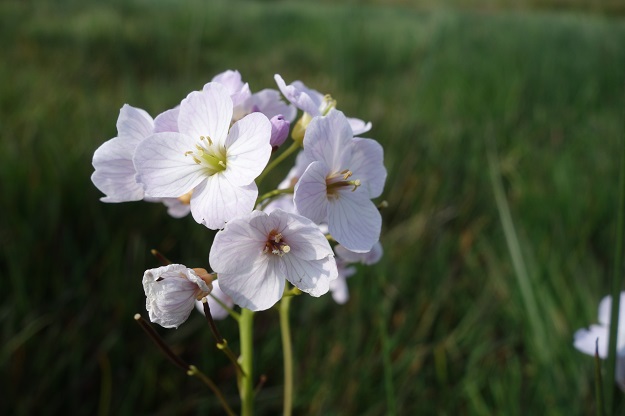 Another edible plant! I like flowers, but I like food more. Stitchwort has very small leaves (don’t be confused by this image), but they taste a little like lettuce and can be used in salads, as can the flowers. They are also a good source of springtime nectar for honeybees. 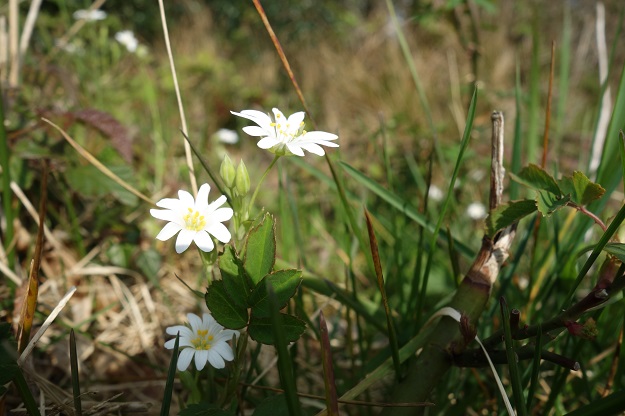 Celandine is the flower with the best name, because it sounds like an Elven lord. Mmm, Elven lords. It is another great food source for bees and early insects, and is high in Vitamin C. You can eat the young leaves or the roots, but as it’s a member of the buttercup family it does contain a toxin which will cause a burning sensation in your mouth and throat when ingested – cooking the leaves before eating will break down this toxin. 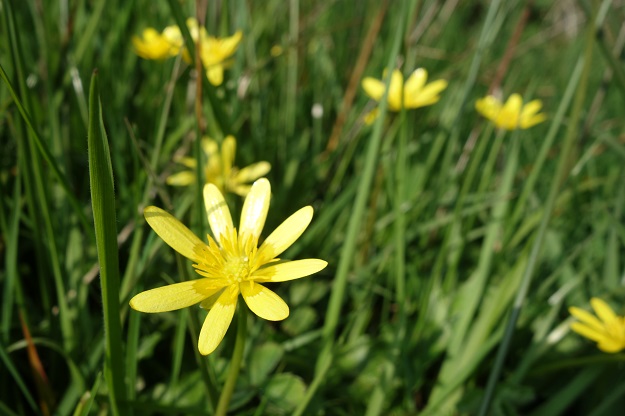 As mentioned earlier, we have a lot of insects and other minibeasts and I have definitely not seen all of them yet, let alone photographed them. My greatest ever beetle find was when I fished the most enormous specimen out of a water trough in Surrey – it was identified as a Tanner beetle, which is not commonly found in this country, by the Natural History Museum’s coleopterist! So I’m always looking to better that.

Oh no, he’s my favourite. I love him. He’s like a little pea. One of the plants it eats is mint, which is useful as we have a tonne of it in our garden. It is so called because it can retract its antennae and feet underneath its ‘shell’. 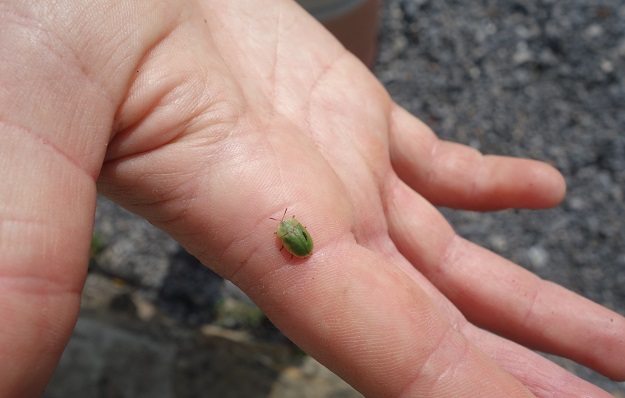 There are MILLIONS of these. I love them, too. This one is a Green Dock Beetle and, as you’ve probably guessed, they eat Dock leaves. 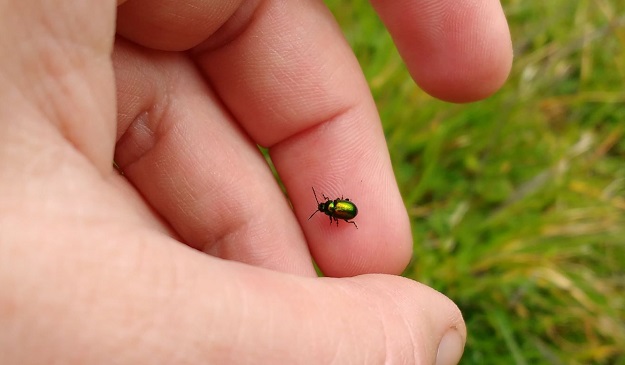 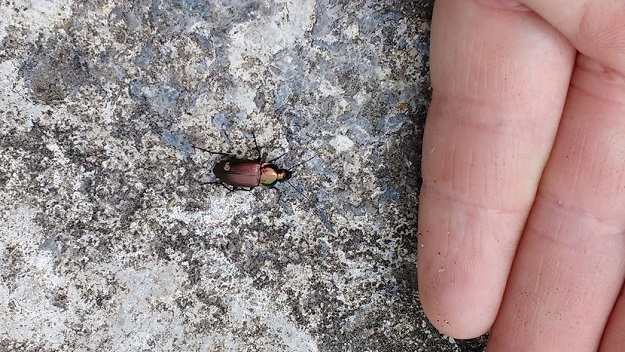 We think that this is a type of snail from the Succineidae family, specifically Succineidae Putris (which is a horrible name for such a cute little fella). It looks like a water snail which is why it caught my eye, as it was in the middle of the meadow; but it is in fact a land snail. It does like very damp conditions however so our fields are perfect for it. 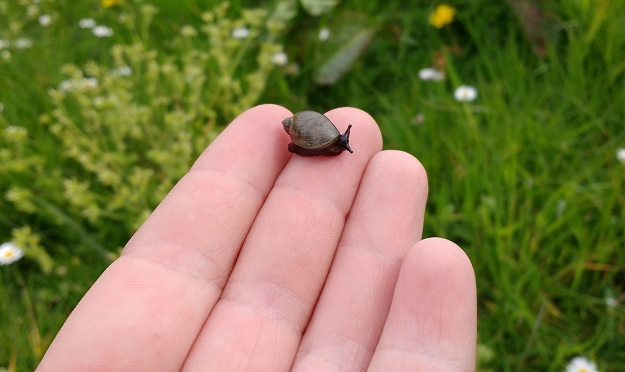