I sure hope you like photos because there are a lot coming up.

Last Saturday, we took the mules out for a hike in the Punchbowl. It was a nice break for Xato who has been doing arena work every day for the past few weeks, and it was good to get Marty out and about – I’m sorry to say that the poor lad gets somewhat neglected between work, magazine, chores, and Xato. It was a glorious day and rambling along with a couple of mules was a very pleasant way to spend it. We met lots of people who wanted to meet and hear about our long-eared friends, so I like to think that we may have planted the seed in a few more hearts.

I had wanted to put Xato’s new baskets on and use them to gather nettles and cleavers, but we’ve been so busy focusing on his riding that we haven’t had a chance to formally introduce his panniers … and as he’s a little wary of them, chucking them on bored and then going out for a hike in public would not have been the smartest move. We put his saddle and gear on anyway, as it does him no harm to wear them while we walk. 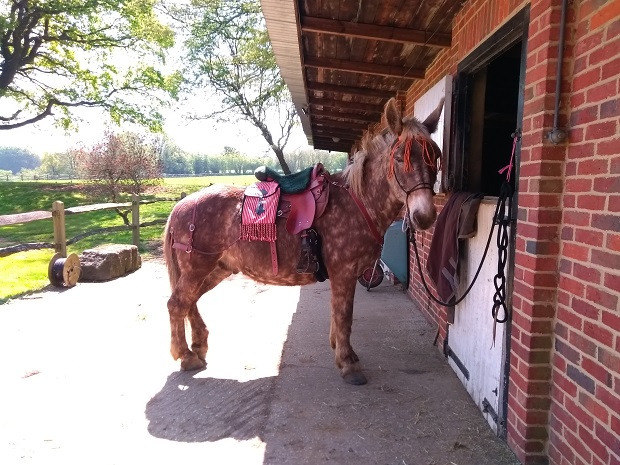 Marty is cross because he would like to walk much faster than Xato. 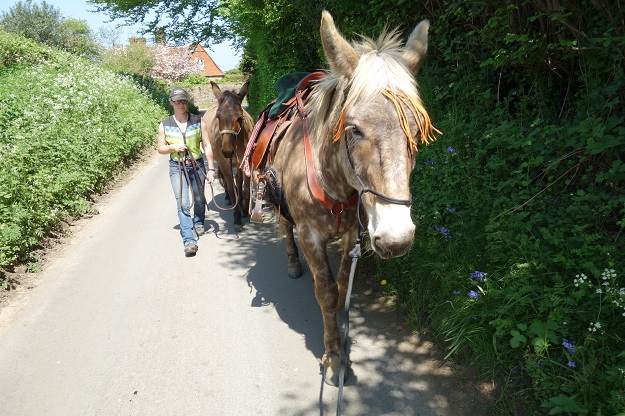 So he tried to jump the ford, but messed up his calculations and landed right in the middle … which was a shock to him. 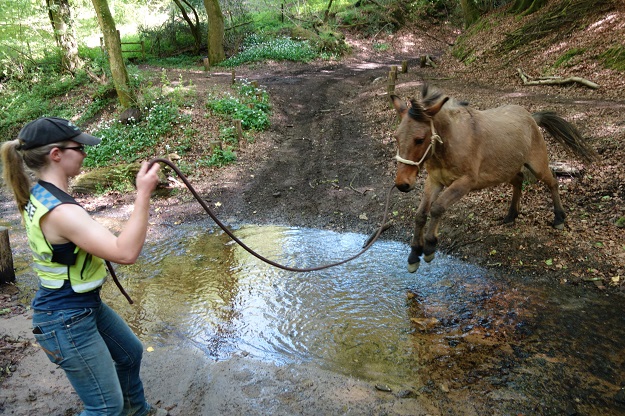 While we were hiking in Austria, many people held onto their mule’s tail to get up hills. I tried it with Marty. He tolerated it but was not impressed. 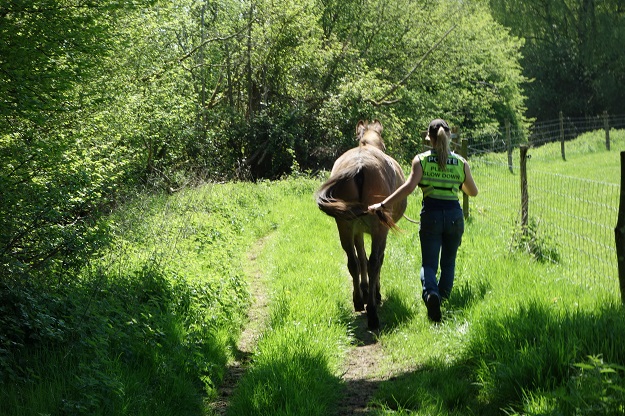 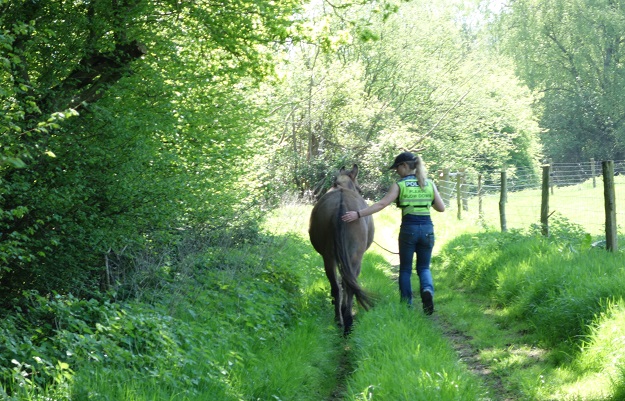 We’re such a good team, even our tail swishes are synchronised. 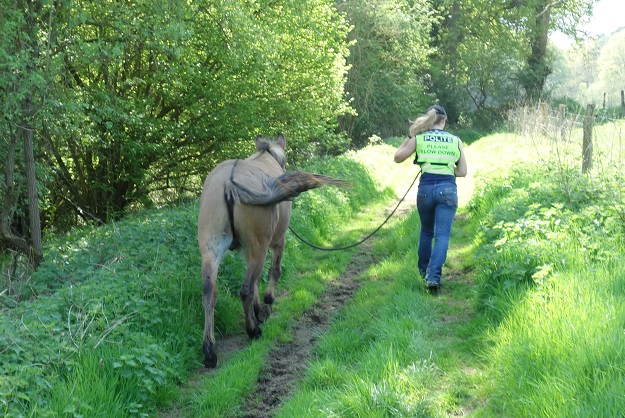 Found some bluebells to pose in. 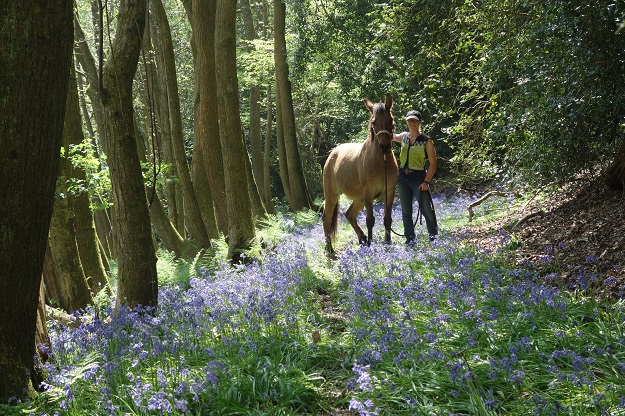 Xato’s turn to be noble and maj-OMG. Put that away! Don’t pee on the bluebells, Xato! 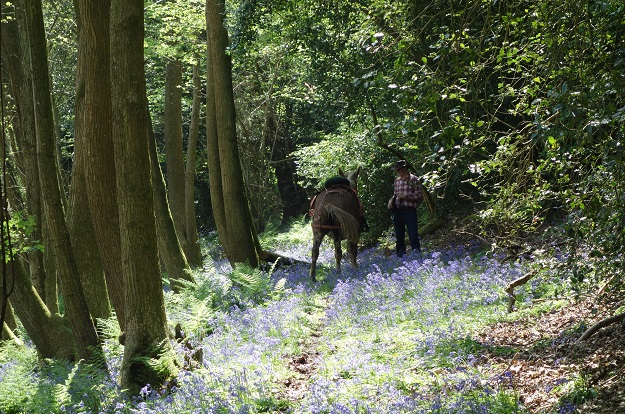 I know Marty, I quite agree. Avert your eyes, lad. 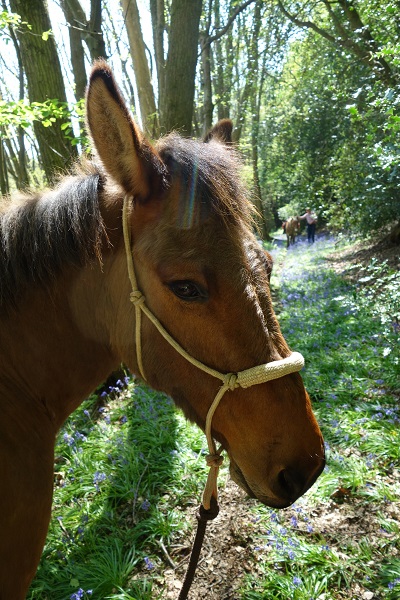 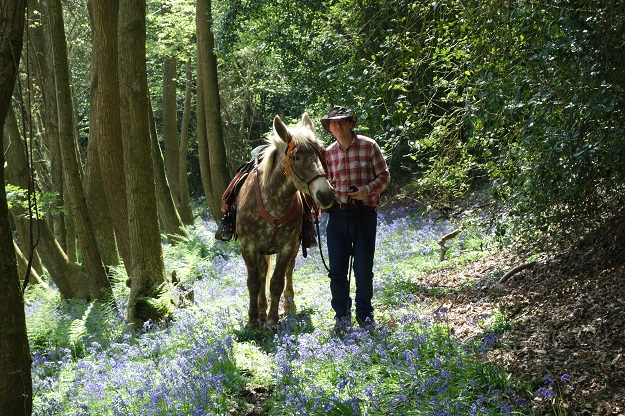 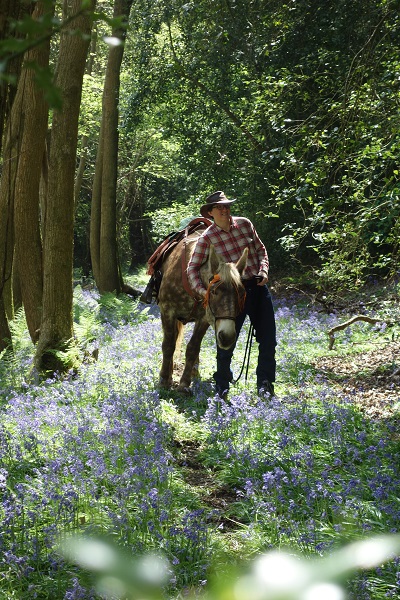 This is the view I would have if Marty was a useful kind of mule. 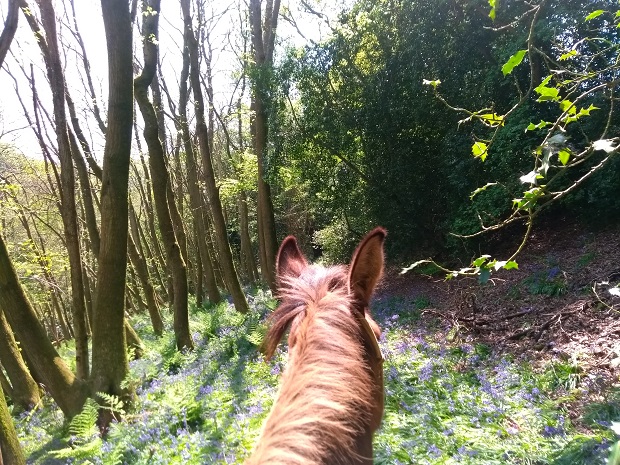 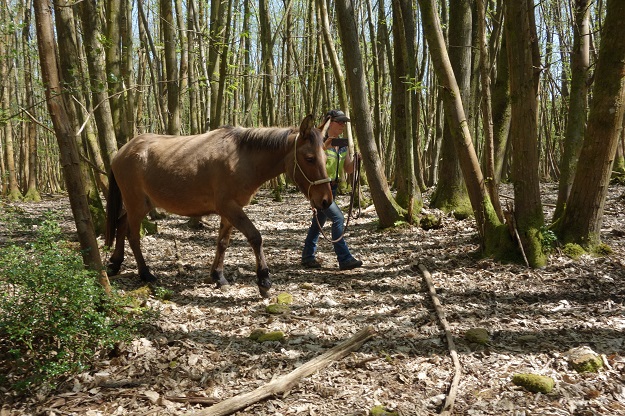 We appear to be having some kind of camouflaged pep talk. 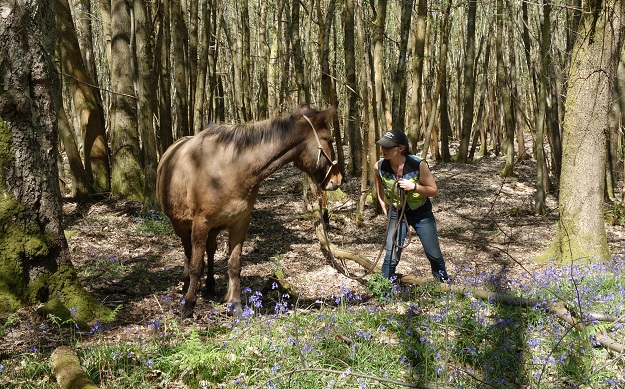 So I took both of them for a photo op, and Marty immediately started “clacking” – you know, that thing foals do to say “Don’t hurt me”? Xato was baffled and suspicious and rightly so, because Marty then chomped him on the eye. 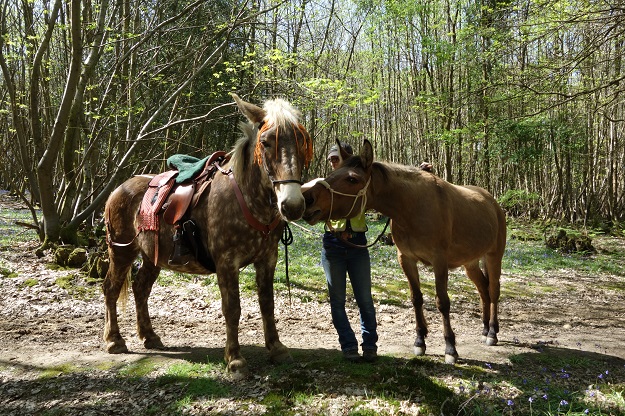 That boy is a genuine weirdo. 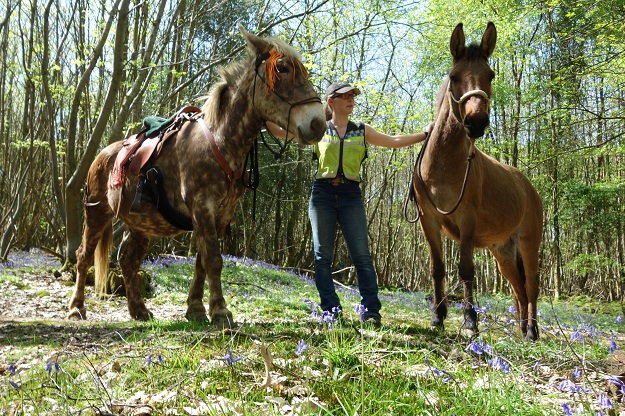 Pausing for a drink in the stream. 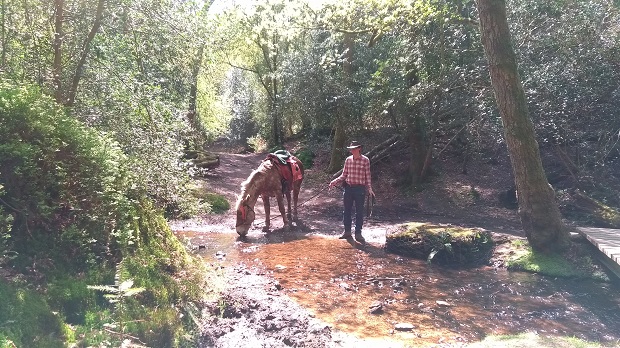 Meeting some young fans. Nobody ever wants to come up and pet Marty – I can’t think why… 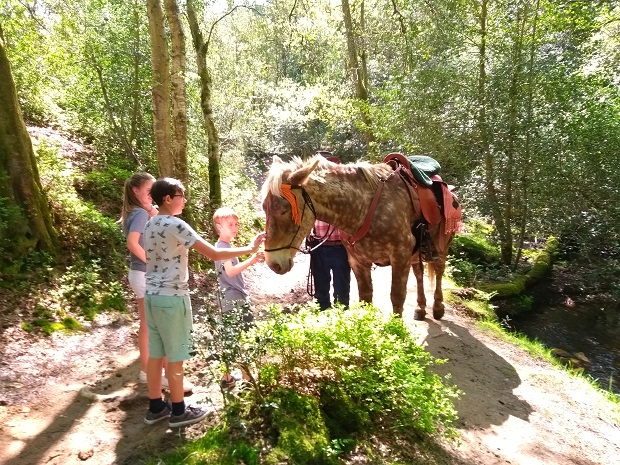 Ruh-roh! Marty temporarily forgot that he’s supposed to stop when the human stops. 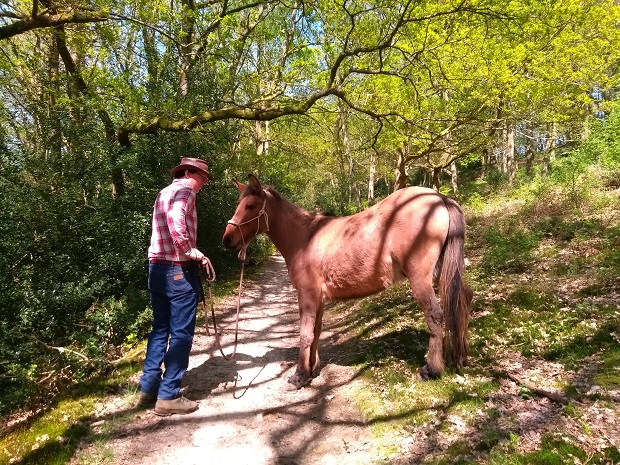 …I’m trying to lean back far enough to get him in frame. 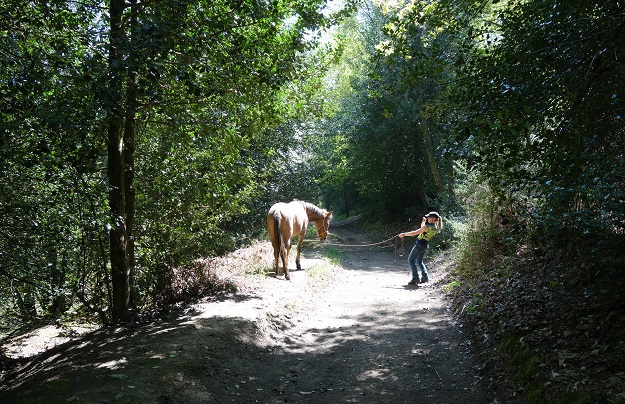 He’s quite a tolerant mule, really. 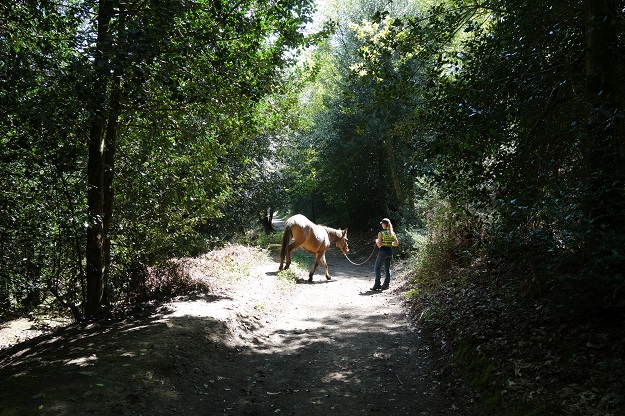 Big hugs for the big man. That gate is our nemesis – it’s very narrow and leads into a narrow pathway, and as it’s spring loaded you need to send your equine through first and ask them to wait while holding the gate open for them. Xato struggles with that as he wants to walk all the way through and then turn round; when you ask him to stop, he panics and takes off. He hates being wrong and he really hates having his thought interrupted. He’s bolted twice due to being asked to stop and wait here, so at home we’ve done a lot of work on leading him from the hip and asking him to just stop instead of stop-and-turn-to-face-you. We are also careful to break down the gateway into small steps rather than asking him through then telling him abruptly to halt.

On this day, he didn’t quite manage to stop straight, but he didn’t run off when I asked for whoa. Instead, he felt me pick up the rope and immediately tried to disengage – which didn’t work out so well as there was a sheer bank to his left. He slipped down it and landed on his nose, but he looked super pleased with himself when he got up. He tries so hard! 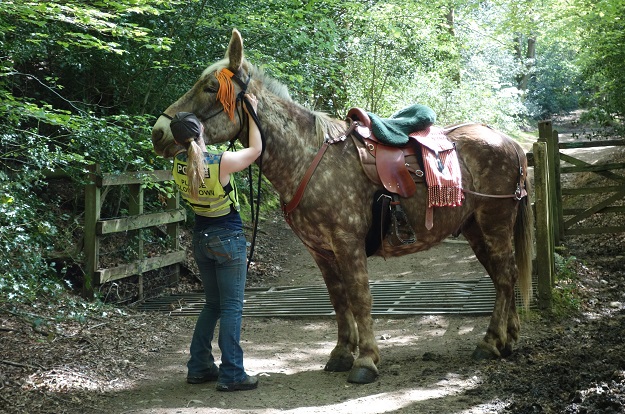