Last month Ben and I attended an open forum hosted by the Holistic Animal Network, whose guest speaker for the evening was Monica Andréewitch. Monica is an instructor for the Surrey branch of Quantum Savvy horsemanship, and she also runs The Pony Academy – a riding school that teaches horsemanship to children, which is something that I think is an absolutely fantastic idea. The outcome of the evening, apart from some serious food for thought, was that I actually won a two hour consultation with her! I was thrilled about this because I really enjoyed her talk and I am one of life’s losers when it comes to competitions; I never win these things. She very kindly agreed to come to me, as Marty hasn’t been in a horsebox since we went to collect him, and we booked the date for this afternoon.

Now, when this was arranged, Marty had finished his sessions with Stacey Bevan and was in the middle of his brief-but-bright period of catchability. Monica had told me that she’d never worked with a mule before, and I was excited for Marty to show her how fascinating and awesome these hybrids are. Yehhh. See, there’s further proof of that no mule-braggin’ rule! Since then of course we’ve fallen off the wagon pretty hard.

He’s a cutie, though. 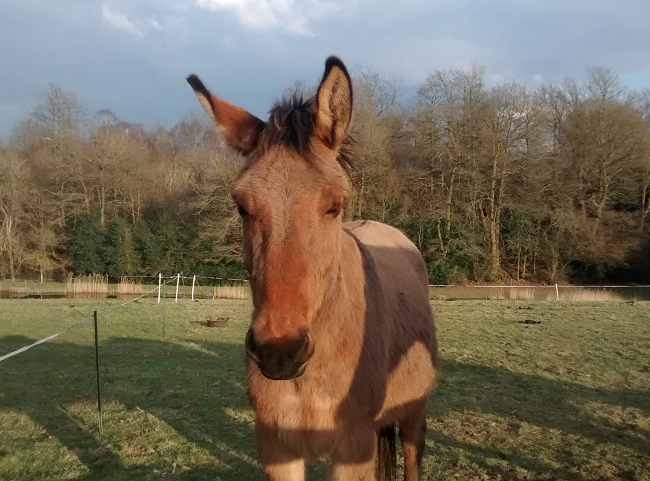 When Monica arrived, she asked me for some details about Marty and our problem with catching and what I thought the issue might be. I mentioned something that Ben had said regarding energy and intent; he had told me that maybe Marty thought I was asking him to back off when I approached him. So I’d been working really hard on being totally cool and collected and trying my best not to seem pushy or scary. I felt like I was presenting a calm exterior, and I thought I was relaxed on the inside too, but then I remembered how I’d entered the field the other day and both Iris and Cash had startled and run away from me. They are more forgiving than the mule and had come back to me pretty quickly, but it still shocked me. I was convinced that I was in an undemanding, easy-going place when I entered, but apparently not!

Before we even left the stable yard, Monica told me to take five minutes to “park my brain” – to think all the things I needed to think by writing them down, before I presented myself to Marty.

Then we made our way over to the paddock. To reach them we needed to cross another field, and we’d gone less than half-way when the horses all abruptly raised their heads and stared at us. Iris and Marty, both of whom had been lying down, jumped to their feet. Monica told me to stop, and explained that the way I was walking was full of purpose and intent. My natural walking pace is to stride – I like to get things done – and it had never occurred to me that the way I walked to the field would have an impact on whether or not my mule would want to be with me. It sounds stupid to me now: I was concentrating on how I walked after I’d gone through the gate or under the fence, but not how I walked immediately before that – as though there was some magical barrier that prevented the herd from picking up on my energy.

Mule wonders if it’s oki for him to graze, or if I’m going to do something scary. 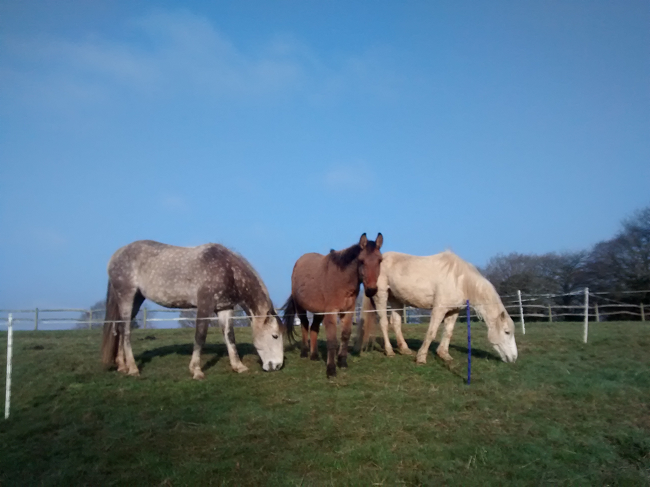 We waited until they’d relaxed and started grazing, and then began to approach again – but this time, Monica told me to imagine myself as round rather than spiky and sharp. She described it as being like the Michelin Man, which sounds silly but the visualisation really helped me!

Before we reached the paddock with our equines in, we needed to cross another paddock in which Kashmir, a little Arab mare, lives. Monica had me practice approaching Kashmir (towards the shoulder on a curved line, with my hand extended, trying to find the ‘channel’ that would draw the mare to me) before trying it with Marty.

With Monica holding the halter, I was able to approach Marty and have him stretch out to touch my extended hand. When he did that, I retreated to reward his try. I did that a few times, and then began to ask a little more from him. I would stroke his nose and retreat; then, when that was acceptable, I would stroke his forehead and retreat. From there I moved on to be able to stroke his neck, chest, shoulder and mane. Every time I approached him, I had to work really hard on not putting in too much energy into my walk, but not seeming “creepy” – i.e. predator-like – either. This was so difficult! I really struggled to find the balance, and although I’m used to the idea of pressure/release and dropping my energy to reward a try, this required me to recognise much more subtle cues and I needed Monica to tell me when to stop and when to go (I say subtle: they seemed subtle to me! They were probably glaringly obvious to someone like Monica). But to see how curious and interested he was – and to feel his good energy once he began to relax – was such a great reward. I felt happier, and I’m pretty sure he felt happier, too.

The next stage was to try with the rope. Monica suggested that I should try leading him with a rope around his neck; this is what Stacey told me to do, and I had great success with that for a while, even being able to transfer it to totally hands-free leading. However, since he refused to be caught on Friday, the neck-rope has also been out of the question so I was happy to try again under Monica’s instruction.

Marty was happy for me to show him the rope while stroking him, and then to use the rope to stroke his shoulder, but he felt the need to spin away when I tried putting it over his neck. This was oki; it was just him telling me that this was a step too far for him today, and that I needed to take a step back and find that place where he could accept it. Monica pointed out however that I need to find the spot where he’s accepting, but still thinks “oh” – or has a little exclamation mark, as I like to think of it. Otherwise, I’m not asking him to think about stepping beyond his comfort zone and we will never get further than what he currently thinks is acceptable. I need to gently push that boundary every time he gets comfortable.

With his sunset sweetheart. 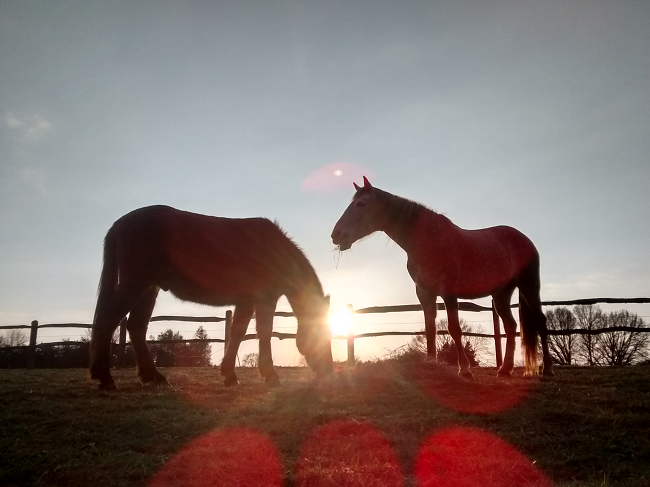 So we ended the session on a good note, and when I walked away from him he actually took three steps to follow me – which was really great of him. He hung around us for a bit, trying to work up the courage to approach Monica (he was really interested in her, but that natural mule suspicion held him at bay), and then he left to go and hang out with the horses. He then did something amazing: he began grooming Cash! Until his sessions with Stacey, the idea of him actually grooming someone else was a bit of a taboo to Marty; he liked to receive, but not to give. Stacey’s sessions, however, always concluded in him seeking out Cash for a good scratch. He’s partaken in mutual groomies since then, but only because I’ve been scratching on him and Cash has happened to wander past. This time, he went straight up to Cash and they groomed on each other for ages. I’ve never seen him do it for so long. This, more than anything else, was proof that he was feeling much happier. He was also yawning a lot, too.

Before we left, Monica had me practice walking at normal speed but with low energy, and then asked me to see how close to Marty I could walk on my way out – preferably reaching out to touch him as I went by. I was delighted to find that I could do this! When Monica did the same, Marty quickly moved away. I felt a lot better about things then, because it showed me that he and I do have a connection and that my work with him is getting results, no matter how small and subtle they may be.

I walked back out to the field after Monica had gone, imagining myself rolling along like the Michelin Man, and was absolutely thrilled to see that Marty stayed grazing until I was quite close. When he looked at me, I stopped and he actually walked up to the fence! Later, once I’d fed and poo-picked and was really done for the day, I tried approaching him and stroking his forehead again. He reached out for my hand, but started to move away when I tried to touch him. I moved with him, imagining that I was attached to him – I wasn’t driving or chasing him – and he stopped and tuned into me again! I gave him a head rub, told him he was a good boy, and left.

…Iris doesn’t have a nose deformity, she’s wriggling her lip! 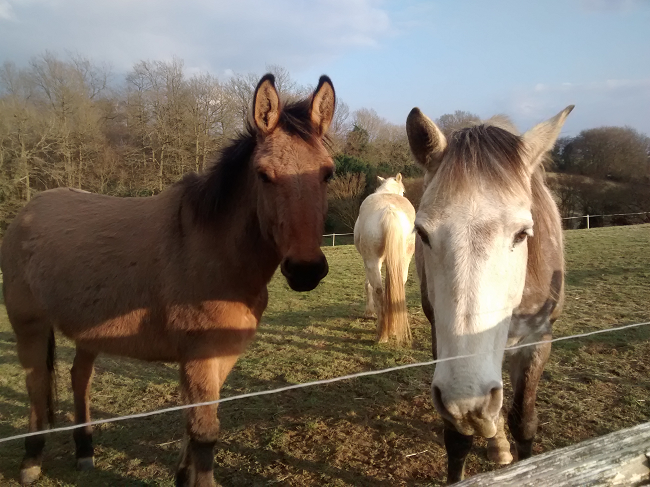 Basically, I was on the right track when I left the halter in the yard and just worked with a neck rope. The reason it wasn’t successful was because I gave in to the temptation to put the halter on him too soon, instead of waiting until we were at the point where – as Monica said – I didn’t need to put it on him. Marty also felt like he wasn’t being given options, so although the method of blocking him worked, I think it was actually making him feel quite oppressed – and mules have a very strong sense of fairness!

Marty is very, very sensitive to things like energy and body language. Something I found very useful to learn was to keep my belly button turned away from him and, when standing with him, to put my weight on my outside leg. I was fascinated to see how abruptly he reacted to Monica when she shifted her weight to the leg nearest him – she made no other movement, but it was enough to alarm Marty. He is definitely going to teach me to be really good at this stuff, and I’m really excited for the things we could achieve once I’ve learnt to read and listen to him properly. But for now: lots of patience, lots of time, and no rush!

Many thanks to Monica for giving so generously with her time. It was a really good afternoon.