I have lately come to realise that there is a surprising amount of mule poetry to be found in old newspapers, to the point where I am beginning to consider it its own genre. The first poem I found was this one, while researching for my blog about canal mules: 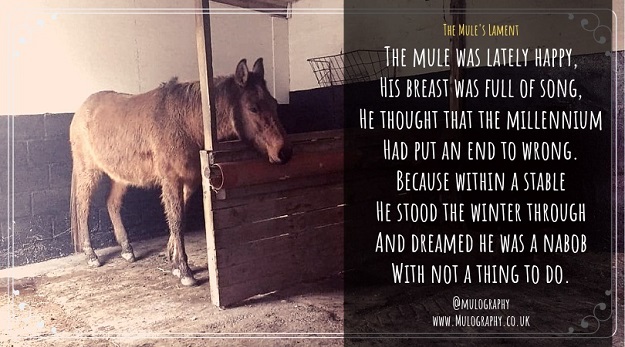 THE MULE’S LAMENT
The Telegraph (Brisbane), 1886
The author, unknown, appears to be listed as “Fuck”.

The mule was lately happy,
His breast was full of song,
He thought that the millennium
Had put an end to wrong.
Because within a stable
He stood the winter through
And dreamed he was a nabob(*)
With not a thing to do.

But now the spring is blooming,
And the Jemima Sal
Is floating, full of brickbats(**),
Upon the thawed canal;
And out upon the tow-path
Reluctant walks the mule,
Annexed unto the hawser,
And stormed with ridicule.

“‘Get up, you wall-eyed critter!
Ho, there; get up, go long!
Whoa, January, dash, dash!’
And the language much more strong,
Is heaped upon me daily,
And life to me’ll be sweet,
The sunny hour I gather,
The driver with my feet.

“I’ll make them keep their distance
When I am hauling coal;
They’ll put on me my harness
At long range with a pole.
Come back, oh snowy winter,
And let me loaf a bit,
And meanwhile, gentle springtime,
Ethereal mildness, git.”

* Nabob: a conspicuously wealthy man
** Brickbat: Either roofing tiles – ‘brick bat koba’ – or insults, both of which work in this context.

Driven by my interest in canal mules, I was excited to discover that the famous Kymer’s Canal – upon which trains of coal were hauled by horses and mules – used to pass right by the village I now live in! This led me to looking through the collection of 19th century / early 20th century newspapers digitalised by the National Library of Wales, and in there I came across the following poems (as well as lots of interesting mule stories): 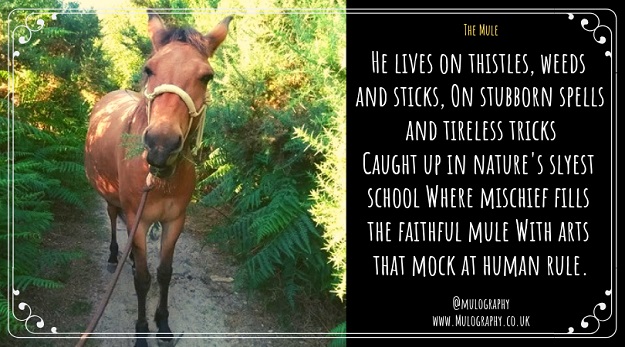 Nor north, nor south, nor west, nor east,
Can fortune find another beast
Cut out by such a cross-grained rule
As marked the making of the mule,
Two ears, like hairy windmill sails;
The most absurd of curious tails;
A hoof to arm each lightning paw,
A voice like filing of a saw,
An eye that seemeth calm and kind,
Yet sees for half a mile behind,
And never fails – with glances quick –
To guide the well-directed kick
That lays the luckless driver low
And whelms him with its weight of woe.
He lives on thistles, weeds and sticks,
On stubborn spells and tireless tricks
Caught up in nature’s slyest school
Where mischief fills the faithful mule
With arts that mock at human rule.
They say that mules can never die –
Are never hungry, never dry –
Can live on sin and simple song
And spend their time the whole day long
Contriving tricks, or skillful [sic] plan
To grind with grief the soul of man,
Nor do they mind how ill they fare
So they but cheat his watchful care
And knock him endwise anywhere. 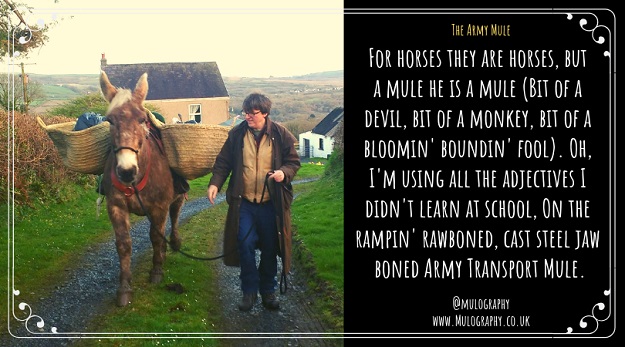 I never would have done it if I’d known what it would be,
I thought it meant promotion and some extra pay for me;
I thought I’d miss a drill or two with packs and trenching tolls,
So I said I’d handled horses and they set me handling mules.

Now horses they are horses, but a mule he is a mule,
(Bit of a devil, bit of a monkey, bit of a bloomin’ boundin’ fool).
Oh, I’m using all the adjectives I didn’t learn at school
On the prancin’, glancin’, ragtime dancin’ blithering Army mule.

If I’d been Father Noah when the cargo walked aboard,
I’d have let the bears and tigers in and never said a word,
But I’d have shoved a placard out to say the house was full,
And shut the Ark up suddent [sic] when I saw the Army mule.

They buck you off when ridden, they crush your leg when led,
They’re mostly sitting on their tail or standing on their head,
They reach their yellow grinders out and gently chew your ear,
And their necks are indiarubber for attacking in the rear.

They’re as musing when they’re happy as a ladies’ riding school,
But when the fancy takes ’em they’re like nothing but a mule—
With the off wheels in the gutter, and the near wheels in the air,
And a leg across the traces, and the driver Lord knows where.

They’re horrid in the stable; they’re worse upon the road,
They’ll bolt with any rider, they’ll jib with any load,
But soon we’re bound across the sea, and when we cross the foam,
I don’t care where we go if we leave the mules at home.

For horses they are horses, but a mule he is a mule,
(Bit of a devil, bit of a monkey, bit of a bloomin’ boundin’ fool).
Oh, I’m using all the adjectives I didn’t learn at school,
On the rampin’ rawboned, cast steel jaw boned Army Transport Mule. 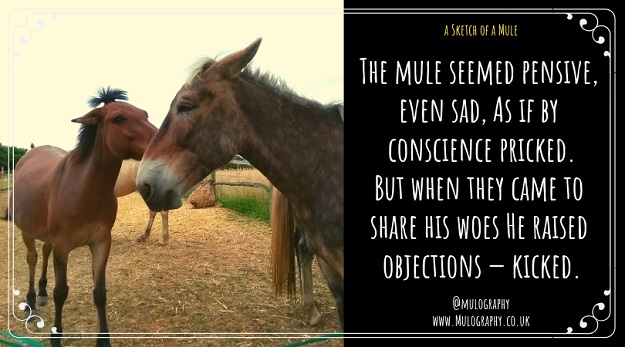 A SKETCH OF A MULE
Monmouthshire Merlin, 10th June, 1881
Unattributed

The mule seemed pensive, even sad,
As if by conscience pricked
But when they came to share his woes
He raised objections—kicked.

The cat came up to sympathise,
With mew and gentle purr;
Alas! she got within his reach,
When – fiddlestrings and fur!

The dog in pity neared him to
Alleviate his care;
He tried to pass around him once,
But – sausage meat and hair!

And John, the honest farmer boy
Who had the beast in charge,
Tried recklessly to harness him –
His funeral was large.

Oh, trifling were the causes which
His flexile legs unfurled;
And many were the quadrupeds
That sought another world.

He never did a decent thing
He wasn’t worth a ducat;
He kicked and kicked until he died.
And then he kicked the bucket. 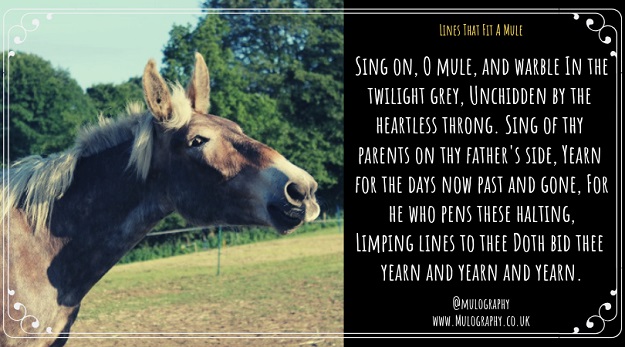 LINES THAT FIT A MULE
Wrexham and Denbighshire Advertiser, 1891
By Bill Nye

Oh, lovely, gentle, unobtrusive mule,
Thou standest idly, ‘gainst the azure sky,
And sweetly, sadly singest like a hired man.
Who taught thee thus to warble
In the noontide heat and wrestle with
Thy deep, corroding grief and joyless woe?
Who taught thy simple heart
Its pent-up wildly warring waste
Of wanton woe to carol forth upon the silent air?

I chide thee not, because thy
Song fraught is with grief-embittered
Monotone and joyless minor chords
Of wild, imported melody for thou
Art restless, woe-begirt, and
Compassed round about with gloom,
Thou timid, trusting orphan mule!

Few joys, indeed, are thine,
Thou thrice-bestricken, madly
Mournful, melancholy mule.
And he alone who strews
Thy pathway with his cold remains
Can give the recompense
Of festering and injurious woe.
He who hath sought to steer
Thy limber, yielding tail
Anigh thy crupper band
Hath given thee joy, and he alone.
‘Tis true, he may have shot
Athwart the zodiac, and, looking
O’er the outer walls upon The New Jerusalem,
have uttered vain regrets;
Thou reckest not, O orphan mule,
For it hath given thee joy, and
Bound about thy bursting heart,
And held thy tottering reason
To its throne.

Sing on, O mule, and warble In the twilight grey,
Unchidden by the heartless throng.
Sing of thy parents on thy father’s side,
Yearn for the days now past and gone,
For he who pens these halting,
Limping lines to thee
Doth bid thee yearn and yearn and yearn.

The newspaper records that Bill wrote the lines for a pet mule, and that “it is in blank verse, which seems to be the only literary method for successfully treating the mule.” 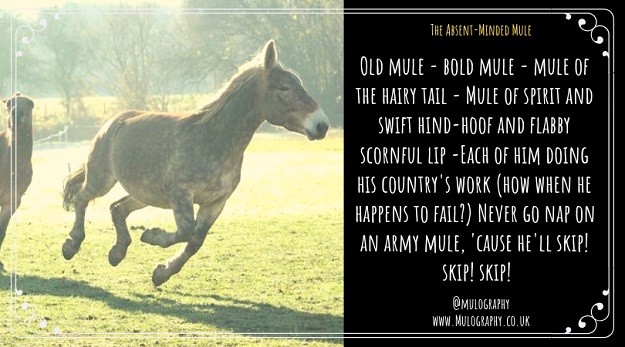 When you’re walking out your Gloucesters and your Irish Fusiliers,
And you feel like slapping Kruger* in the mouth,
Don’t forget to keep an optic on a little chap with ears,
A gentleman in floor-boards, just come South;
He’s an absent-minded beggar, and his style is pretty high –
Though, of course, we’ve got to take him as we find him –
He is here on active service, and he’s been and done a guy,
And left a lot o’ little things behind him!
Old mule – bold mule – mule of the hairy tail –
Mule of spirit and swift hind-hoof and flabby scornful lip –
Each of him doing his country’s work (how when he happens to fail?)
Never go nap on an army mule, ’cause he’ll skip! skip! skip!

He’d been trained to smell blank cartridge and wink the other eye,
He delighted in the music of the band,
But he’d never seen no boulders, and he didn’t want to die,
And shot and shell were more than he could stand:
He’s an absent-minded beggar, though he heard his country’s call,
And his reg’ment didn’t need to send to find him;
He chucked his job and bolted – and the job before us all
Is to get the men he’s went and left behind him!
Rough job – tough job – job for Buller & Co.**
Job for fifty-thousand men (that’s the bloomin’ tip!)
Each of ’em doing his country’s work, each of ’em having a go;
Each of ’em ‘ware of the army mule what’ll skip! skip! skip!

* Kruger: possibly Paul Kruger, a South African politician and “obstinate guardian of an unjust cause”?
** Buller & Co.: there was a Devonshire mining company of that name active in the 19th century, but I think this might refer to General Redvers Buller, a recipient of the Victoria Cross in 1879 for bravery under fire. He saved three men of the Frontier Light Horse, whose steeds had either been killed or exhausted, and carried them one at a time to safety on the back of his own horse.

The Absent-Minded Mule is an incomplete version taken from a booklet of satirical verse, published under the same name as this poem. The paper says, “The verse is very unequal in merit, but is nevertheless of considerable interest. Mr. Crosland’s lines on Cromwell are distinctly good in a serious vein; but the item which will be read with the most attention in an ephemeral book is his parody which gives the title to the collection, and of which we quote a verse of two.”

The collection was published in 1899 and is still available to purchase on Amazon, or you can view the title poem in its entirety here.

They marshaled men of every rank,
They summoned muffled guns to roll,
They called the merchant from the bank,
They caused the Church’s bell to toll.

And slowly to his grave they passed,
Obeying every martial rule,
And there with tears they took a last,
Long look at that bombarded mule.

Wrapped in the flag he served so well.
Amid a cloud of smoke he sank;
“The Slain” – by tons of shot and shell –
Went under with a round of blank.

This is in reference to a Cuban mule – the single casualty of a US Navy bombardment of the coastal town of Matanzas – who was buried with full military honours and two hundred people, including officers, in attendance. I came across it after reading a newpaper report about the mule in question, and further research revealed that there is now an annual Matanza Mule Day on April 27th. Look out for a future blog about world newspaper clippings which will go into more detail on this incident!