A few months ago, my Dad asked me whether mules were used to tow narrowboats and barges on English canals. I didn’t know anything about this (which was intolerable); my interest in history lies at least a few hundred years earlier. I knew about mules working the canals in America – there’s even a famous song about it – but what about here in the UK?

I’m ashamed to say that I had no idea there was such a rich culture and heritage around the community of people who lived and worked on the waterways. Of course I knew of the beautifully painted narrowboats, and had admired the romantic view of the heavy horse steadily plodding down the towpath, but I didn’t realise that such a community had grown up around it. Canal Junction says, “The ‘Canal Age’, although short, was revolutionary, responsible for opening up Britain to the Industrial Revolution, much as the Internet is now opening up the world in the Information Revolution. Rural people flocked to factories and mills, their life and environment, and the shape of the nation and the world, being irreversibly changed. Then Canal People drifted apart from land locked 18th and 19th century Britain, developing their own free-floating canal culture, traditions, customs, ways of work and dress.”

What had previously been a male dominated world shifted to a more family orientated lifestyle after the First World War, when women and children came aboard as additional free labour. Around this time is when a new type of folk art called ‘Roses and Castles’ sprang up; the colourful illustrations that cover every part of the narrowboat and the things associated with it. Even the horse’s harness would be decorated!

The modern canal system came into being because of the Industrial Revolution (in the mid-18th century), which demanded a more economic way to transport large quantities of goods and commodities. Narrowboats drawn by horses, mules and donkeys were an efficient way to move cargo in bulk. A horse could move approximately fifty times as much weight in a boat as it could with a cart, so this was the best way to transport goods such as coal until the railways came along. Previously, Britain would have seen long trains of pack ponies carrying cargo across the land; another skill that has sadly fallen out of common use in the UK, for all but a few dedicated people.

Mules and donkeys were not as common on the waterways as horses were. The Duke of Bridgewater reputedly preferred mules over horses because they were tougher, and I’m told that donkey pairs were used on the Staffs & Worcs, Droitwich, Stroudwater, Thames & Severn, Llangollen and Worcester & Birmingham canals. Mules are mentioned working on the W&B canals in a 1790 edition of England’s Gazetter.

Although I came across many sources that said mules and donkey pairs were also used to tow narrowboats, I struggled to find any photographic evidence or even anecdotal stories about mules working on British waterways.

Eventually, a search led me to an obituary from 2008 for a man called Jack Skinner. Jack was the last in a long line of boatmen, with at least three generations before him earning a living from the canals. Of particular interest to me were his aunt and uncle, Rose and Joe, who the obituary said “ran Friendship, the last mule-drawn narrowboat on the Oxford cut”.

Friendship, it turned out, seems to be quite a famous boat which made my job much easier. This article from Canal Junction even supplied me with my very first photo of a mule on an English canal! The mule is shown eating from a nostern – literally “nose tin”, an often decorated metal bowl that served as a nose bag. 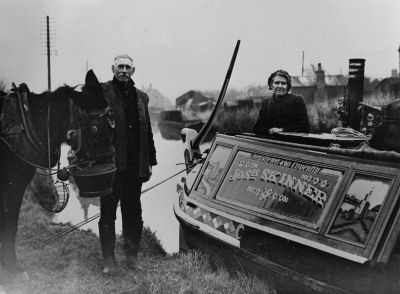 Another article from Towpath Talk gave me much more detailed information, such as the date and price of purchase of Friendship, and the addition of a second boat, Elizabeth. It also told me that there were two mules owned by the Skinners, and they were called Dolly and Dick. Not only did I have mules, but I had names! Brilliant.

Almost immediately I was recommended a book called “Ramlin Rose: The Boatwoman’s Story” by Sheila Stewart. I was pleased to find that most of it is available online, although I have ordered a hard copy as well because it’s a brilliantly told story and worth having on any shelf.

Although the narrator is, I believe, a fictional character, her story is based on recorded interviews Sheila made with the last remaining boatwomen. In it there is mention of the very real Joe and Rose Skinner, and we are told that Dolly and Dick were bought from the American Army after the First World War – and that Dolly, the smaller of the two, was actually a hinny (to be exact, she uses the word “fummel”, which is not a term I’d heard used before. It may be that Rose, the narrator, is just telling us that Dolly was female, as I’ve seen hinny sometimes used to describe a female mule. She does also state that “Dolly was sired by a n’ass”, which would make her a mule).

Dick disappears from the scene at an unspecified point; my assumption is that he possibly went around the time the Skinners sold Elizabeth in 1937. However, I must add that the only mention I’ve found of Dick so far is in Ramlin Rose, the Towpath Talk article, and a 1977 book called Back-Door Britain (in which Dick is partnered with a mule named “Ollie”…!). Every other source speaks fondly about Dolly, referring to her as Joe’s mule in the singular – so I think this probably means that Dick wasn’t around for very long.

Dolly was much loved by Joe, who preferred mules over horses. The working equines of the waterways played such a pivotal role that they were often considered part of the family, and Dolly worked for many years before sadly succumbing to pneumonia. Ramlin Rose says that Dolly fell into the canal, and caught pneumonia that way; this is backed up by a commentator in the Coventry and Oxford Canal Group, who cites the Oxford canal southern summit as the place she fell in. A volume from the intriguingly named 1975 Cake And Cockhorse says that she merely “caught a cold” after having to wade through water due to the towpath being in poor repair.

Incredibly, I came across mention of Dolly in a book called River Cherwall by Jean Stone; Jack Skinner’s widow told her that Dolly had lived with Joe and Rose for thirty-nine years. I don’t know how old she was when they purchased her, but she must have been at a pretty advanced age when she passed – even for a mule who are typically longer lived than horses.

I have thoroughly enjoyed finding out as much as I can about these two mules. How nice it is to be able to reawaken their memory a few decades on; thank you for reading this, and for remembering them with me. They can live forever if we remember them! Dolly, in particular, seems to have been as large a character on the waterways as her indomitable owner. To borrow a line from the Eerie Canal song, she was clearly a good ol’ worker and a good ol’ pal; I rather miss her, and I never even knew her.

This is not a complete article. It’s my intention to put something together for the British Mule Society journal, but in the meantime, this blog is a good place for me to collate and compile my findings as I discover them. So keep an eye out for more posts about the canal mules of Britain!

This post is dedicated to my Dad, who prompted me to look into this in the first place.

I will leave you with a selection of Dolly photos. I’m sorry they’re so small, I couldn’t find any larger sizes.