I ‘met’ Django’s owner, Candace, because she posted a photo online of an incredible charro saddle she’d bought. I commented to say how cool I thought it was, and I’m glad I did as it’s led to this fantastic Mule Tale! I could sit and listen to the adventures of Django and friends all day. I think you’ll really enjoy this one … but then, I think that about all of them.

All images copyright © to Candace Seward. 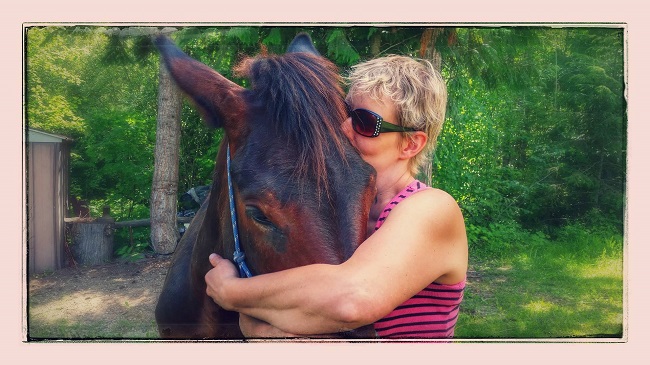 Django is a 3.5 year old mule out of a Belgian/Arab/Paint mare and a mammoth jack. When not eating, he would love to become my personal teddy bear. Having affectionate horses never prepared me for the dog like adoration that he has for me. It’s quite humbling, and certainly reciprocated.

I was considering breeding a beautiful, but highly hormonal mare to a mammoth jack, and drove to visit what turned out to be Django’s sire, Norman. I thought he would be a good match for my mare. Before I left the farm, the owner suggested I take a look at Norman’s current foal crop. There were four of them, and Django (then called Beau) and I hit it off immediately. I had never believed in ‘love at first sight’ until then. I agonized for a day on purchasing him and parting from my mare, or breeding her and getting my own. She certainly would have made an outstanding mule. My two concerns were what if she didn’t conceive, and what if it was as unpredictably hormonal as she. Django was already on the
ground, eliminating all what ifs. A month later, the mare was rehomed, little Django was weaned and came to keep my Tennessee Walker/Morgan company. They loved each other from the very start.

My hopes are that he and I will be partners in travels; and that he will derive as much enjoyment from it as I will. I am taking my time with starting him, mules and donkeys mature a year slower than horses. I’ve played with him since he was six months; he’s worn a saddle since that age, packed pool noodles, quad tires, tarps and more to desensitize and work on his self esteem. I’m not a social person, so the show world has no attraction for me. We will roam all over the mountains of British Columbia, probably under saddle, and possibly in harness as well.

As I’ve mentioned, the difference in personality between the (fantastic) horses I have been blessed to own and my mule has been fascinating. He enjoys and solicits squeezy hugs and general affectionate mauling. When I walk into the pasture to feed, Django will intercept me, presenting the side of his neck,which is tailor made for hugging. After a quick cuddle and some mumbled endearments, we turn to continue to feed. If I walk near the pasture with halters or bridles, he hastens to the gate. If I try to halter a horse, he tries to wear the halter and leadrope as well, to the horse’s usual disgust.

Two years ago, I began clicker-training both the mule and horses, mostly due to retraining a recycled racehorse that I had obtained, and Django turned into a Nerd Superstar! Once he figured out that he could turn me into his personal pez dispenser, he began crafting Cooler Ways to do what I asked. I had a wooden platform all three of the equines at liberty could access, and I would ask one of them at a time to step up on it. If Django didn’t ‘feel’ like it, I would move on to asking a horse the same task. Before the horse can respond, Django will hone in and not only stand on the platform, he will paw, stand with only his hindquarters on it, etc.

I also am teaching all three to play fetch, and the general intelligence and personalities of the three is clearly shown. I squeak the dog toy for attention, toss it up to 20 feet away, and send them. Django will put his ears back a bit because he’s concentrating and talking smack to the toy, and will often trot after it, stop abruptly, bite it over and over to make it squeak, lift it up and look at me. Obviously, I still need to work on his retrieve! The Morgan Orion pins his ears and chases after the toy and then just gets distracted making the toy squeak. Regal the Recycled Racehorse happily chases after the toy, ears pricked, and then just licks the toy lovingly.

Another interesting difference between the two species would be the story of the first winter I had Django, when I had him gelded. It takes an astonishing amount of drug to sedate and drop a mule or donkey for such a procedure. When he finally went down, he had enough to drop a grizzly bear. I assisted the veterinarian, and when Django regained his feet he glared at anything moving near him. For the next week I did all I could to regain his good graces, and he grudgingly accepted me into them. One day we had visitors, strangers to Django, and the first he had seen since the vet. He was agitated, and I went into the pen with him, asking the others to stay out. He nuzzled me affectionately, but would not let me go near the people, possibly Because Strangers Cut Things Off Of You That You May Later Need. He continuously put his body between me and my guests, and then gently but firmly escorted me a safer distance away. I wasn’t knocked down, but I felt like I was in police custody! He has only pulled that move once since, when I was unaware of a moose on our property that I bumbled too close to. “Excuse me Ma’am, but this is for your own safety.”

The most important things I have learned as a new mule owner are:

a) remember that ear positioning is very different from a horse. If a mule (or donkey) walks up to you with its ears back, it’s not a bad thing! Often, it’s a form of begging. Observe what your mule is saying! As well, butt presentations are often a solicitation for scratching.

b) They are NOT stupid, so if they appear to be acting that way, stop and review your approach. Another tip that works for me is to ask for a response, and if no response or the wrong one, turn your back and ignore the animal. This works better if there is another animal to turn to. Suddenly little Dunce Cap is doing algebra to bring attention back to himself.

c) Don’t hesitate to make mistakes, or worry about the mule ‘holding a grudge’. If the mistake is honest, and you apologize (yes, I mean that), they will forgive. I was hesitant to discipline initially, thinking of this old wives’ tale. I no longer hesitate, and have no problem.

d) Don’t hesitate to try clicker training. How much better is it to have them think it is their idea?

e) Don’t drill. Don’t over train a mule, or they will find ways to make it more interesting.

f) Help your mule to succeed. Start and end each training with cues and tasks they like to do,so they anticipate training and working with you. Some love praise, snacks or scratches. Find what makes your mule happy, and have fun letting him train you…to stand politely on a mounting block while they pick you up, to dutifully stand with their halter while they catch you at the gate. We humans have so much to learn!