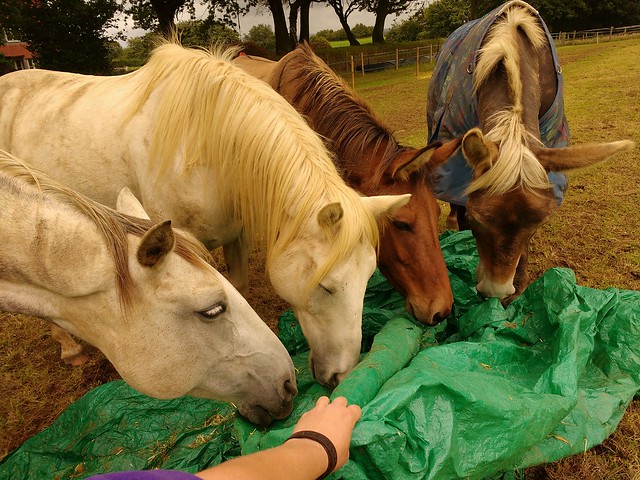 Originally posted on the Facebook page – go here to see the comments, as there were plenty of interesting ones.

I recently read a rant about equines being asked to walk over tarpaulins. The author demonstrated the ridiculousness of such a task by stating how unlikely it is that they would take their horse out on a ride and be constantly confronted by tarpaulins, umbrellas, and other commonly used “desensitisers”.

This is an argument that I’ve heard surprisingly often. Technically, they are correct in their statement: it is very unlikely that we will ever encounter the exact things found on a horse agility course (although Xato and I did recently ride over a tarpaulin that someone had spread on the road to collect hedge trimmings … but that’s neither here nor there). However, I feel that people who say this are missing the point somewhat.

We don’t ask our mules and horses to walk over something like a tarpaulin because we believe that we might one day encounter a wild tarpaulin and have to defeat it. We ask them to walk over different surfaces because – when done correctly – it builds their confidence and prepares them for many things; different terrain out hacking (or that muddy gateway in winter!), crossing water, loading into a trailer, and so on. It’s not possible to practice and prepare for every single potential encounter, which is why we use methods such as horse agility to help teach our equines that they can trust us and our decisions. It’s also useful to know how they’ll respond, in a safe environment, to any question we put to them. 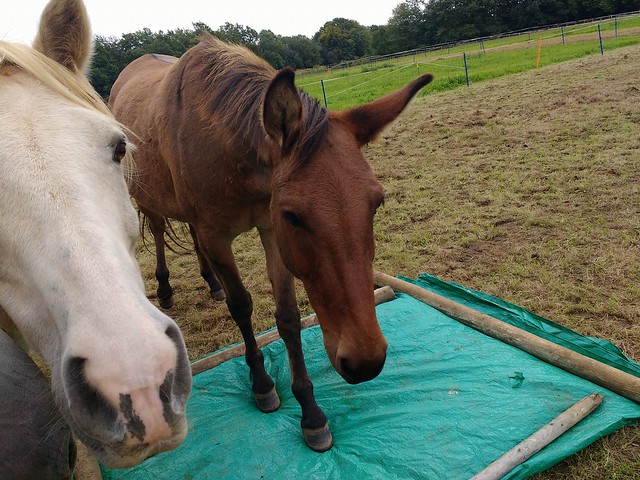 Some input from readers which I thought explained things far better than I did:

“I would also see these methods as enrichment, giving them a chance to think and encounter their own fearful feelings and learn a new way to deal with them.” — Susanna

“They seem to have totally missed the point that we’re training our animals to trust us. The real request isn’t ‘Please cross the tarp’ but ‘Please follow me when I ask you to do something weird’. I also clicker train mine to ‘Touch the monster’ with their nose. Doesn’t matter what the day’s monster is – road cone, recycling box, stationary tractor etc. – it’s about trusting my request.” — Joy

“I always think that giving them challenges gives the horse the opportunity to ‘learn to think’.” — Erica

“If anything the fact that a tarp is something you probably won’t see while out is the whole point – using it as a training aid, it needs to be new to the horse.” — Ben

“Animals in the wild have a constantly changing environment presenting them with an ever changing supply of challenges which, in the case of horses (developed over around 55 million years of evolution), they normally overcome alongside their fellow herd members – sometimes being adventurous and taking the lead, sometimes overcoming their nerves by following a bolder friend, or sent ahead regardless by those behind. The average paddock could be seen as a very dull and unstimulating environment by comparison. Setting up a few novel situations should help restore some of the interest and complexity lost to horses in a domestic set-up, as well as develop their innate problem solving abilities and, perhaps most importantly, promote confidence in themselves and their humans as part of a team.” — Leonita