Marty and I have been pootling along rather nicely for the past month. I think this is partly due to the fact that I’ve finally decided to stop over-analysing* and, more importantly, stop worrying about what other people think. I’ve been a horse girl for over twenty years now, but Marty is my first mule and, as such, it’s quite easy to drown in all the conflicting information I’ve received on how to handle him. It’s very easy to lose confidence in yourself.

* well, most of the time. But sometimes he’s just so damn enigmatic that I can’t help but analyse him. Marty asks “Why?” the whole time; now I do, too.

As well as a polo shirt with him on it, I now have a hoodie with him on it thanks to Mondsworth Style Embroidery. I’m not a creepy fangirl I swear. 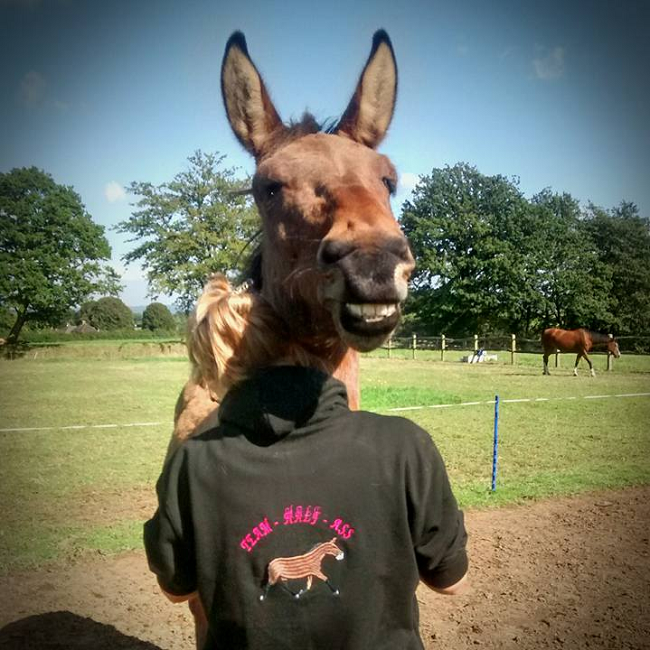 I am now at a stage where I can distinguish between people who have helpful, knowledgeable things to say and people who can’t understand that Marty might be different from anything they’ve had to work with before. I think it’s human nature to judge others, see a situation and think “I know how I would fix that”. Sometimes you might be right, but it’s all too easy to assume that because such-and-such worked with your animal it will work with another. And I know this because I’m guilty of doing it myself! But over the past 17 months, Marty has not only made me a better horsewoman, he’s also made me a better person. If I find myself thinking “s/he just needs to do this”, I try to stop and remind myself that I have no idea of the situation other than what I’ve read. I do not know the animal, I have never handled the animal, I have not watched the owner work with it. Sometimes you can do everything right and it still doesn’t go your way.

I am still learning and I will always be learning, but I have amassed enough practical experience by now that I feel able to trust my own instincts. Most of this is due to simply spending every day with my mule and learning to read and understand him. I have learnt to smile politely when people exclaim “He’s five? You’d better hurry up!”, or tell me to just “make” him do what I want (oh, as if it were that simple!). This refusal to be shamed into rushing or forcing things is very liberating, and as a result I feel more relaxed when working with him – which has a hugely positive impact.

Taking a stroll home through the village. 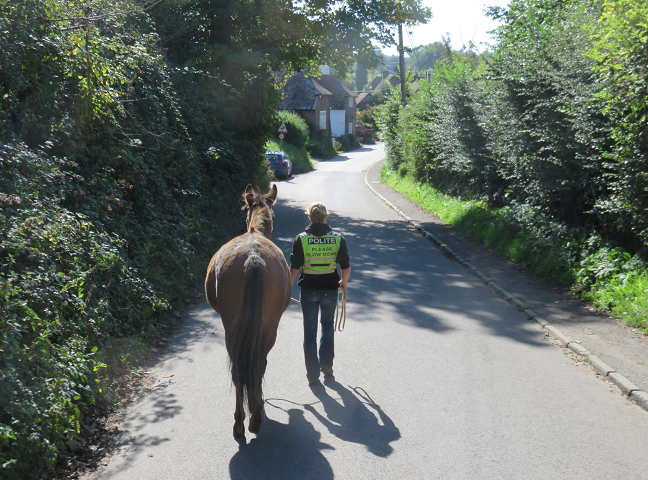 To further this self-improvement that Marty has required of me, I recently had a session with Trust Technique practitioner Jacqui Howe. Being able to trust my own instincts also means that I know when to ask for help, and I was curious about the Trust Technique as it seemed to focus more on the handler than the animal. Some of you may have seen the lovely I Have A Dream video by James French, who pioneered the method.

The very basic premise of the Trust Technique (and you can check out their official website for their own summary) is learning to practice mindfulness. Mindfulness is the art of paying attention and being ‘in the moment’ – much like equines themselves. I’m pretty sure everyone knows the saying “horses can smell fear”. Whether or not odor comes into it, equines can definitely pick up on our emotions. By remembering to be in the moment, we bring ourselves into a state of relaxation and this in turn transfers to our animals. I don’t think this is particularly esoteric or woo; it seems pretty logical to me. 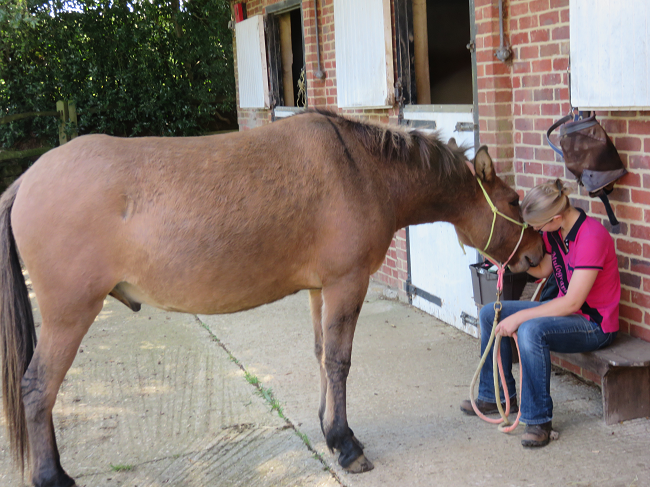 I’d caught Marty prior to the consultation (oh, he’s being brilliant to catch by the way! In fact a couple of days ago I was even able to put his halter on when he was soaking wet after a sudden, heavy downpour; a situation that would previously have resulted in him running away. He wasn’t keen and I could feel his whole body primed to run, but he tried so very hard and I was able to slip the halter on, do what I needed to do and let him go again without fuss), and after standing and talking with Jacqui in the arena she suggested letting him loose. Now, our arena has three ungrazed, grassy banks and I figured I might have a problem catching him again as I have in the past when he’s loose in there. But I wasn’t concerned – I just had this completely mellow, pragmatic view about it. If I could catch him, great; if not, I had all afternoon to work on it. Anyway, Marty stood by me for a few moments before wandering away and grazing nearby as Jacqui taught me how to be in the moment.

When I went to catch him, he initially moved away; I waited, approached again (still feeling completely que sera sera about the situation, a wonderful new way of thinking for me!), and this time was able to put his halter on. Whether this was due to the mindfulness I’d been practicing or Jacqui’s calm influence or simply because Marty and I are a much better team since the last time I turned him loose in the arena, I don’t know; but I was a little gobsmacked about how easy and quiet it had been. I like things that are easy and quiet.

All in step! I think they’d look good driven as a random, don’t you? 😛

With his halter on, I felt that Marty was quite frustrated by my attempts to connect. This is probably because I’ve always made it clear that halter on equals business time; he has a job to do when he’s wearing it. He started nudging me, and those nudges turned into full-on shoves which I was not entirely happy about. Jacqui told me to just acknowledge him and step away when he pushed on me, but I was not particularly comfortable with that as I felt it compromised our consistency; he knows about personal space and he knows not to shove people around, and by stepping away from him I was only reaffirming his belief that this was acceptable behaviour. It would also be very confusing to him if I said that it’s oki to push on me in this situation but not in another. I don’t set these rules to be mean to him – I set them to keep us both safe, and I abide by them as mules cannot bear inconsistency.

After it became clear that we weren’t really getting the hang of it this way, we tried again at liberty – this time, in his field. This was much better for us, and although I have been practicing mindfulness while working with him I mostly practice it while I’m in the field. While out I still sometimes let the what if’s get the better of me, but in the field I can focus fully on just paying attention! Hopefully I can transfer this mindfulness to everything I do with him once I get better at it.

Marty, completely unconcerned by the fact that Iris is lagging behind. 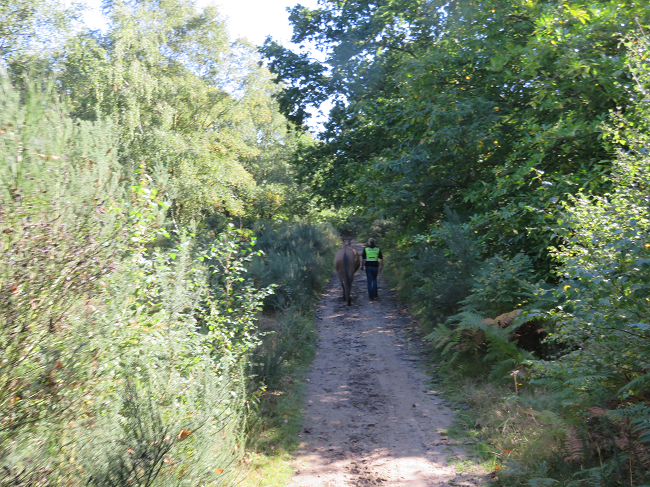 I’ve since led him out onto the common for the first time in five months, with Ben riding Iris to give us company – on Jacqui’s suggestion. I wasn’t sure about this initially, as both Ben and I always aim to get a horse/mule walking/riding out alone before we introduce company. But as he used to be so good at it, and has now suffered a big dent in his confidence, I decided it wouldn’t hurt to give him a little boost. Interestingly, it doesn’t seem like having Iris along has any effect on the mule at all; but she makes me feel better, as the reason I’ve become nervous about walking Marty is that I now worry about him getting loose (even though, in the five months since The Dog Incident, he’s never once tried to get away from me). With his beloved Iris along, I know that even if he did he would stick with her rather than run home. This in turn makes Marty less nervous! He definitely approves of returning to longer walks, as like me he adores exploring and he marches along, scanning the way and thoroughly enjoying himself. 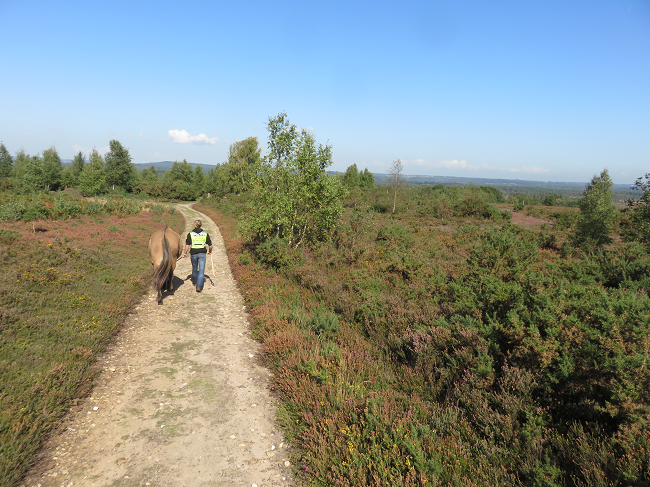 The other change I’ve made recently is that we now have the herd on a track! Well, kind of. It’s more like a horseshoe shape at the moment. Better than nothing, though. The good points of a track system is that it encourages more movement – for example, ours has fresh grass at one end at the water trough at the other, so they have to walk all the way round to get to either. For us, it also helps us preserve grass by strip-grazing the centre of the track, although I know many people use a track system specifically to keep horses off grass.

We keep ours on DIY grass livery, where the set-up involves us cycling between three fields throughout the year. This is excellent for grazing but does mean that setting up a track isn’t easy, as it requires a lot of work to put up and take down that amount of fencing several times a year! I think we’ve finally figured out a sustainable way to do it, though, and our equines are happier for it.Our little group have always been a fairly peaceable lot, but I do feel like they’re even more mellow now we’ve introduced this change to their lifestyle.

2 thoughts on “Trust and Trackways”