The mule was easy to catch today, but I rather suspect that was because I don’t usually work him on Fridays and he thought it was going to be a halter on/halter off/grass scenario. Ha.

I took him out for a walk onto the common and he was high energy the whole way. He is really very nervous. I don’t know where this anxiety has come from, but I am working very hard to help him overcome it. Whatever is causing this fear of leaving the property and stepping out into the big wide world is, I’m sure, the reason he is reluctant to be caught. Last week I noticed that he has become quite clumsy and stumbles a lot, which is very unusual for a mule; he was also obsessed with drinking from puddles, particularly the ones found on the waterlogged, boggy ground out in the Punchbowl. When I mentioned the latter to Ben, he suggested that the mule may be seeking magnesium, so we have put him on a specific donkey balancer (which he really ought to have been on already – alas, his owner is an idiot. None of the feed stores round here keep it in stock so we had to order it in specially) and will also be giving him an extra magnesium supplement. I had a vague knowledge that magnesium was used as a calmer for horses, but when I looked into the deficiency symptoms I discovered that they include hyperexcitability, nervousness, muscle soreness and hypersensitivity to being touched. Hmm. Sound familiar?

Regarding the stumbling, I spoke to our wonderful EP who suggested that I get a physio out to look at him. When we first got Marty his hooves were fairly long and the toes twisted inwards, and over the past few months his hoof balance has changed significantly as he’s had them trimmed down to their proper shape. I suppose it’s like if you spent all your life walking around in high heels, and then suddenly started wearing flats – they’d be more comfortable, but you’d almost certainly have sore muscles that now had to be used differently. His toes also grow very quickly between trims, so it may be that we just need to keep them filed down ourselves.

Anyway, that’s the potential physical problems I’m addressing. As far as the psychological stuff goes, his reactiveness to haltering has more or less been sorted: I’ve developed a new technique for taking the halter off, and he no longer becomes tense or flinches when being handled with it. Phew! Excuse me while I wave my tiny tiny victory flag.

I mentioned that, the last time I took him onto the common, we walked past the track where he’d encountered the loose horse a few weeks back and he was significantly calmer once beyond it. Today, I took him down it. Like I say, he was terribly nervous already, so I guess today was either the best time to make him face his fear or the worst time – but it went well, so I’ll go with the former! He planted himself, refused to move, wiggled around and tried very hard to dissuade me from taking that path, but I was gentle yet firm and told him that there was nothing to be afraid of and that we’d face his fear together (as opposed to earlier, when he’d got upset about walking past a shiny black van and I’d halted him and told him to get a grip. That did actually work, though…). The first few strides down it were quite bouncy, but once we turned on to a couple of new-to-him tracks he calmed right down and seemed more interested than flighty. He obviously prefers exploring new places, but practically I can’t take him on a totally new trail every time we walk out. We will need to compromise!

I’ve found that when he gets rushy and starts power-walking, which he did quite a lot of today, asking him to halt and then walk on again works really well. I think it interrupts his forward thought and prompts him to tune into me again, because nine times out of ten he will walk on much calmer than he was before he was halted. Asking him for back up is also useful (both of these are techniques taught to me by Ben. It is very useful having an exceptionally good trainer on hand 24/7, and he has to respond to my every whinge and feckless question because he’s engaged to me and thems the rules. HA).

The mule has a curious habit of turning his nose in towards my face and looking directly at me while we’re walking. He only does this when he’s very nervous about something. It is quite unnerving to have him staring at me like that, and I discourage it because it brings him too much into my space, but I do wonder if it’s a comfort thing for him. Is he looking for approval and assurance? Or is he contemplating whether or not biting my face off would solve his predicament? Maybe it’s my face that’s making him nervous. Sorry, mulo. We can’t all be as pretty as you.

This has ended up very long-winded like the majority of my posts (Ben said I should have a shirt that says: Don’t Ask Me About My Mule Unless You Really Want To Hear About My Mule), but the tl;dr version is:
– mule was very nervous for today’s entire 40 minute walk
– but he handled everything and paid attention to me
– also I handled everything and didn’t wimp out of doing things just because I was afraid of what might possibly potentially happen. Yes, it’s tiny victory flag time again!

Taking the positives out of today, we are now at a place where he is much more inclined to really think about a situation rather than just becoming frustrated with me and throwing a tantrum. He was never a badly behaved mule and thinking has always been his main forte, but there were times – particularly when out on the common – where he would get overwhelmed and have to jump up and down or threaten to bite me. Now he does his intense face staring instead. Swings and roundabouts, I guess. But hey – it’s still another opportunity for the victory flag.

Despite having such an apparently traumatic session with me, he actually left his reward grass and walked right across the field to hang out with me for the rest of the afternoon … which was extremely nice. Yeh, he only wanted scratchies (if I’m there I may as well be doing something useful, right?), but it still felt good that he chose to be with me over food or his horse buddies. He was very playful and we had a hilarious game of chase around the wheelbarrow, because I wanted to take a photo of him from the opposite side … and he didn’t. He’s a pretty cool guy. 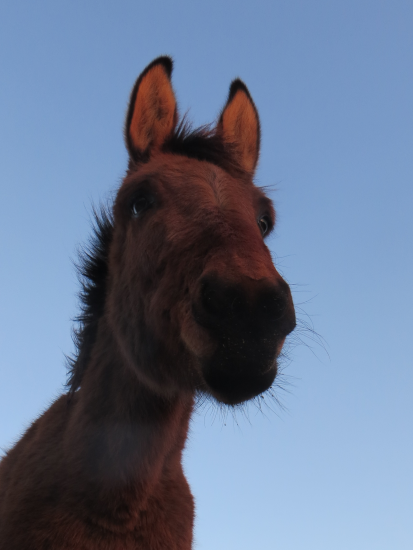 5 thoughts on “Time to crack out the tiny victory flag”