A while ago, someone posted a list of never-do’s on a mule group I follow on Facebook. It was a very funny list, but also completely true in every respect. One of the commandments was to “never brag on your mule”, which I think goes for every equine; if they can find a way to pull you down a peg or two, then they will. I didn’t think I was guilty of this with Marty, however. I like to talk about what we’ve been up to and how well he’s doing because I’m proud of him, not me, and because I find it fascinating to see him learn. This may be a public blog, but I’m writing for me as much as I’m writing for anyone else. It’s nice to read back and remember all the little details.

That being said … after being away from the computer for a while, I finally sit down to write a blog about how we’re getting on and how happy we are, and what happens the next day? I can’t catch him. It was a nice fortnight or so, but Marty has decided that being caught is not for him after all.

A mini Marty Mulicorn that a friend bought me, made by Ogldoll! I think I like mini-Marty better. He’s easy to catch and he doesn’t ask me to scratch his butt. 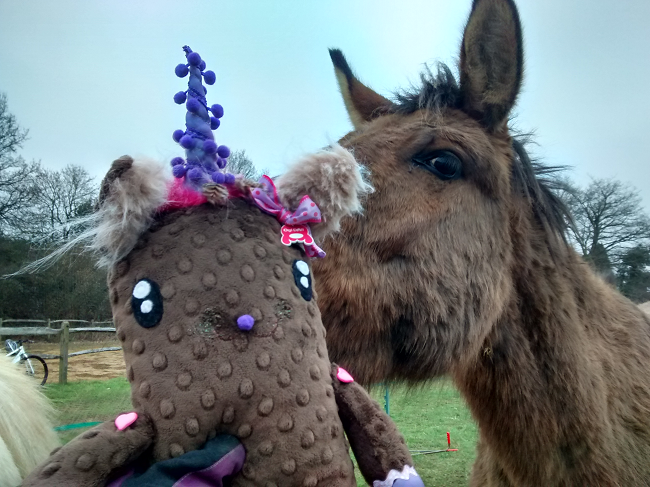 I’m feeling very demoralised. It might seem pathetic to get upset, but we’ve just come out of three months of being unable to catch him – and I have absolutely no idea why we’ve fallen down again. I could understand it if his last handling experience had been bad, or stressful, or boring. But with Marty, it feels like he just acts on a whim. At the risk of sounding bitter, it’s hard to see other people apparently having no problem at all with their mules, whereas for me I feel like Marty and I just encounter issue after issue. The simplest explanation for that is that I am the problem! Other people can do it, so why can’t I? Kate Sandel wrote a fantastic article recently about getting it wrong and why we shouldn’t beat ourselves up about it, and even with her advice clear in my head … I would still kind of like to get it right. Quite soon. Pretty please?

Of course, Marty’s reluctance today could just be down to the fact that he was snoozing when I arrived and maybe he was angry at being disturbed. He’s a mule! This is not a crazy notion. Yesterday, for example, he kept asking me for butt scratchies and no matter where I tried, he didn’t respond with the “That’s the spot!” lip stretch. Eventually, disgusted with my incompetence, he left and then refused to let me anywhere near him. Round and round the field he went, running off whenever I got close, wrinkling his nose and pinning his ears. I was bemused but not too concerned, as there had been no halter involved. When I came back later he was still angry with me, but after some extensive patience on my part I persuaded him to come over and let me touch him again. After a while he asked for butt scratchies, and again I tried everywhere: his hamstrings, his hips, his hocks, his tail, every inch of his hindquarters … I even tried rubbing the same spot on each side simultaneously, as sometimes he only likes it when I do it that way. Nothing. And then I found it: the spot he wanted scratching was the very top of his inner thigh. Not an area I tend to stick my hand, as you can imagine. And once I’d done that he was my BFF mulo again.

What even is that? 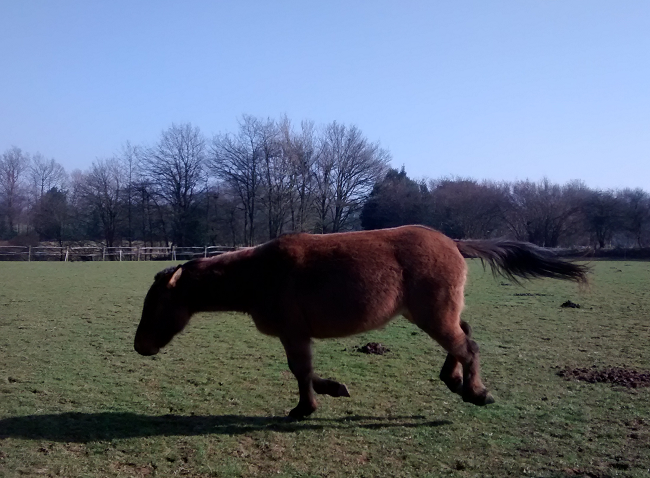 Even while I despair, I can see the funny side. I do feel like we’re some kind of circus act at times. We are definitely a comedy duo, but – mule: I would really like to be let in on the joke.

Today, after the running around and grumping, I had him come over to snuff my hair while I sat on the ground, graze near me while I poo-picked, and eventually stand with me and let me scratch and hug him (he also asked for butt scratchies, but I was cross and told him he didn’t deserve them). But no luck with the halter, or the rope-around-the-neck that worked so well before.

I also had some very weird behaviour from him: I’d taken the horses out and put them to graze in the arena, partly because they were charging around with the mule and being very unhelpful, and partly because I wanted Marty to see that being caught had good consequences for them and not being caught had sad, boring consequences for him. I re-entered the field, but didn’t approach the mule; we were like the same magnetic pole, and there was a limit of how close I could get before he had to move away. I was waiting to see if he could come to me. He didn’t, and eventually I turned my back on him. Then I heard him pawing and, glancing over my shoulder, I saw that he was looking for a place to roll. I’ve only ever seen him lying down three times – and each time he was down when I arrived, not while I was there. He’s rolled once in my presence. He found a spot a few yards from me, rolled, got up, looked for another spot, rolled again, and then lay there on his belly for a few minutes. He looked round, rubbed his near hind coronet, nudged his stifle, and then stood up. 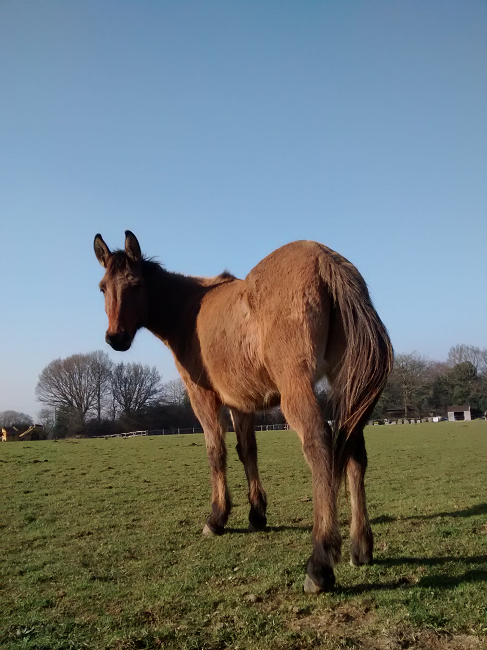 Of course I immediately started worrying about colic and I asked him if he was sore, but if he understood I didn’t get any response. He didn’t show any other signs of colic, lameness or general discomfort while I was there, and he settled down to graze soon after; so his behaviour was rather perplexing.

1 thought on “The trials and tribulations of a whimsical mule”