Today we discovered something else the mule can do with his bells on: he can jump!

Mules are so. Cool. So cool. I watch videos of people in the States taking their mules up and down these steep inclines, and it sort of puts our bank scrambling to shame – but I still get a thrill every time he nimbly handles whatever terrain I face him with.

This is easy terrain. I am not skilled enough to juggle mule and camera when crossing rougher trails! 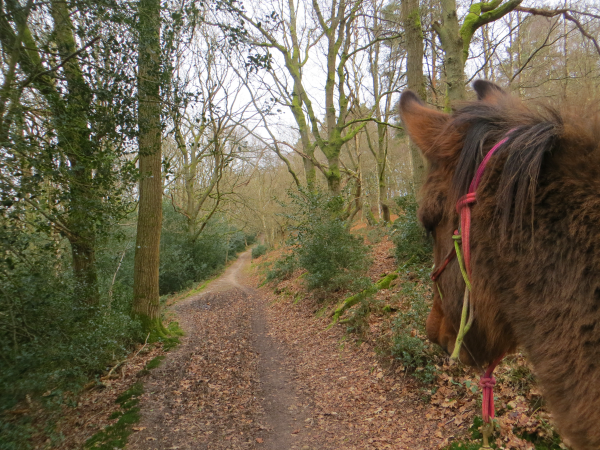 Anyway, on our walk this morning I took him down a narrow trail that I hadn’t been on before. I got half-way up it on horseback a couple of months ago, but we’d had to turn around because of a fallen tree – too low to ride a 16hh horse under, but I knew it would be no problem for my little mule. Since then we’ve had some pretty strong winds, however, and there was a lot more debris on the path. We picked our way around various fallen branches and under a couple of trees, and then we came up against a serious blockage. The track was one of those fantastic hollow ways, and very narrow – the path itself was about a foot across, and the banks rose almost vertically above us on either side. In front of us was an enormously fat, twisted branch. Its broken end was sat in the middle of the track, and it then went straight up before curving left to block off that side of the track, and then twisted back on itself to block off the other side too. Had I been by myself I could have just ducked round on its left, but it was a touch too narrow for Marty – he could maybe have done it, but not without having to squeeze through and I didn’t want to risk bringing the whole thing down on top of us. So I decided to see if he would be able to climb the bank on the right. It was littered with smaller branches and twigs, and as I say was very, very steep; so I climbed over the tree and played out the leadrope to its full extent, giving him a chance to decide what to do. I’ve seen him scale banks as steep as this and cling to them as though gravity doesn’t apply, but the footing wasn’t so good and if he didn’t think he could do it then I certainly wasn’t going to force him. He peered over the section of branch that I’d just clambered over – it was about level with his chest – and then he carefully shifted his hindquarters beneath him, neatly folded his forelegs against his chest, and popped over from a standstill.

I have marveled at his jumping skills before, although I’ve also been somewhat horrified by them as I’ve only seen him jump over things like fences … and horsebox partitions. This was the first time he jumped something he was supposed to! If it had been a nice, horizontal branch straight across the trail then his care and skill would still have been impressive, but this one was so twisted and in such an awkward position that he really had to get himself into a tight little area in order to get over it. I honestly don’t think a horse could have done it.

He’d been quite high energy up until that point, but shortly afterwards his anxiety just melted away and we had such a lovely stroll home. I could have stayed out with him all day. He was forward going and interested in his surroundings, but his breathing was calm and his ears had gone off their red alert setting – he was content to let them flop around and listen to all the sounds of the woodland. We went ‘off-roading’ a couple of times, by climbing banks and following the narrow, muddy trails through the bracken and gorse that the feral ponies had made. It was a lot of fun.

It was his first time out and about with his bells on, and whether they played any part in creating the mellow mule I came home with I don’t know for sure. But it was so good to have my confident, enthusiastic boy back. I hope we can continue in this vein! 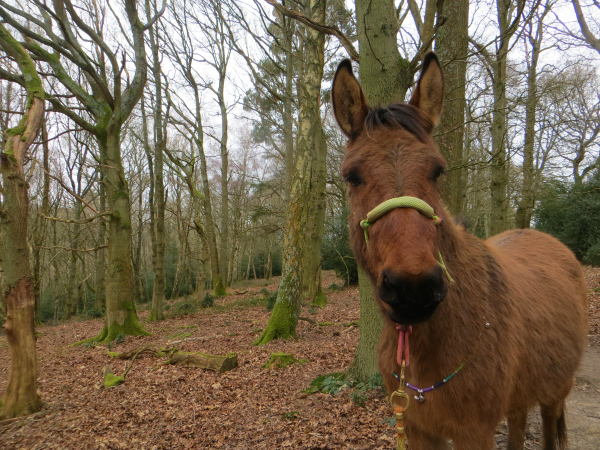