I am very proud of my mule today: he wore his saddle and girth for the first time! Walked around with it like he’d been doing it his whole life. Clever, beautiful little mulo.

He’s had ropes round his belly and nummnahs and blankets on his back, and has even carried the saddle before, but today was the first time I put everything together and actually did the girth up (the last time I tried, I discovered that my pony’s old girth was far too small for mister fatty bee).

I just want to point out that I am aware the saddle looks ridiculous – it is not his proper, will-be-ridden-in saddle. Just his training saddle. It’s a lightweight synthetic that belonged to my old pony, and I thought it would be the perfect thing for getting him used to the feel and the sounds of carrying a saddle. Oh! And as for the girth…! He’s so hairy that, even though the girth isn’t done up particularly tightly, it takes this big chunk from his outline and looks like I’m trying to suffocate him or something.

This is his proud-yet-slightly-unsure look. At this end of the arena he could see the horses watching him, and I guess he was checking to make sure that he still looked cool. 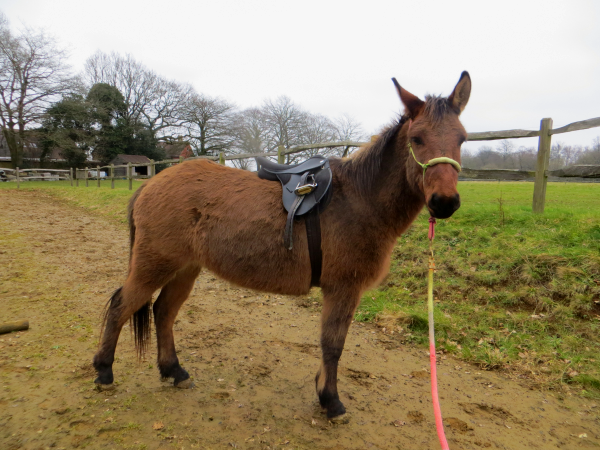 However, successes aside, wee almost didn’t get that far. Once again, he was very angry about being caught – he stood and watched me approach, then pinned his ears and scuttled off to hide behind the mare as soon as he realised the halter was meant for him. We played hide-and-seek around a very patient Iris for a few minutes until he stepped clear and stood, glaring like a stroppy teenager, his head slightly turned away from me and his ears set at grumpy o’clock. I knew that if I approached him now he’d leave, so I just waited – flanked on either side by two very hopeful horses. They’ve learnt that the fence gets moved when the mule gets caught, so they understand that it’s in their best interests to help me catch him by staying out of the way. Both of them were gently nuzzling and lipping at my arms; I imagined they were saying, “Go on! Don’t give up! You can get him! …And then remember to give us some grass afterwards, yeh?”

Eventually, he moved his head so that it wasn’t quite towards me, but wasn’t actively turned away from me either. I took a chance and stepped towards him, and – grudgingly – he let me halter him.

The next issue was leaving the field, as he kept planting himself and refusing to walk on. I got him moving nicely and then let him graze in-hand for a bit (his reward for being caught straight away – i.e. I didn’t have to go away and do something else this time). But when I asked him to move on, his response was to throw a tantrum and run backwards at full speed. I helicoptered the tail of my leadrope until he found forward again, and then we did some work on leading – because he knows this stuff, he had the best teacher, and I would be very embarrassed if he relapsed while under my care. Not to mention that having a horse/mule who leads well is one of the most basic things. Never mind what they can do in the dressage arena, I want one that actually walks with me! He settled quite quickly and came through really nicely; I suspect he was just trying to see what he could get away with.

Because he was in such a silly mood I thought today might not be such a good day to try his saddle after all, but I had all the equipment out so I took him into the arena anyway. I knew I could see where he was at and change my plans if need be.

We did some circle work first, which he’s very good at, just to give him a bit of confidence. Then I picked up the rope and flipped it over his back; he didn’t bat an eyelid. I ran it under his belly and around his girth, pulled it snug, repeated the process, and then asked him to walk forward while I held the rope tight around him. He was fine.

Then I picked the girth up, laid it over his back, jingled the buckles – not a problem. I honestly think the rhythm beads have helped him when it comes to things making unexpected noises!

Next it was the saddle, which he was fine with. I picked up the skirts and moved the billets around, which he was slightly concerned by – and by concerned, I mean his ears flicked back and his neck tensed slightly – so I did this until he was oki with it. I walked him around with the saddle perched on top and that was no problem, either.

Then came the girth. I buckled the right side on while the saddle was on his back, because I figured that if he were bothered by the sound or movement I’d rather know now – when the saddle could still be easily removed – rather than when the girth was attached on both sides. I took it really slowly, one hole at a time, until the girth was snug enough to keep the saddle in place (the last thing I wanted was for it to swing underneath him if he took offence). I praised him, treated him, rubbed on him, and then we spent a while walking up the arena. It was stop-start to begin with; he took a couple of steps and then I saw the tensing neck and the small mouth and the tail swish that suggested he was getting worried, so I halted him, praised him again, and then, after a few moments, asked for another few steps. These were absolutely fine, and we meandered our way up the arena a few strides at a time.

The saddle also needs to sit further back. Oh dear! Next time I’ll put his saddle on like I’m actually a competent person. 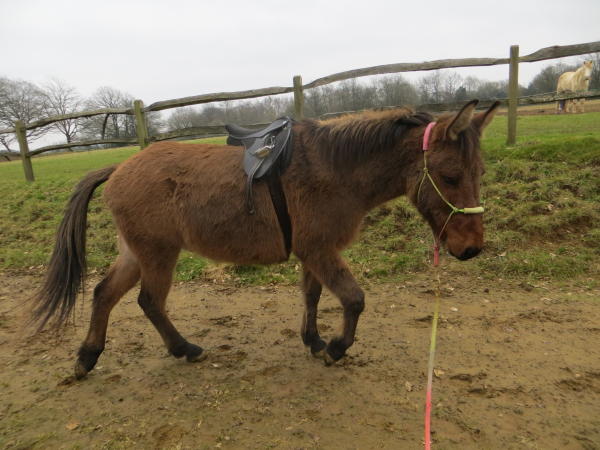 At the top I asked him to step over a pole, did a couple of circles, and then we walked all the way back down to the gate where I unsaddled him, gave him the huge fuss he rightly deserved, and put him back in the field.

I guess I’d better start looking to buy a proper saddle for him, now!