Marty has had a second week of working with Ben, and it has been a really good thing for him. He is doing so well – once again I’m seeing that steady, thoughtful mule behaviour that I love! He still has moments where he anticipates commands or gets bothered by stuff, but more and more I’m seeing him catch himself, think, and come down.

Touching the ears and poll. This photo moment was not followed by an explosion – the raised head and leg was literally all he did, which is such an improvement! 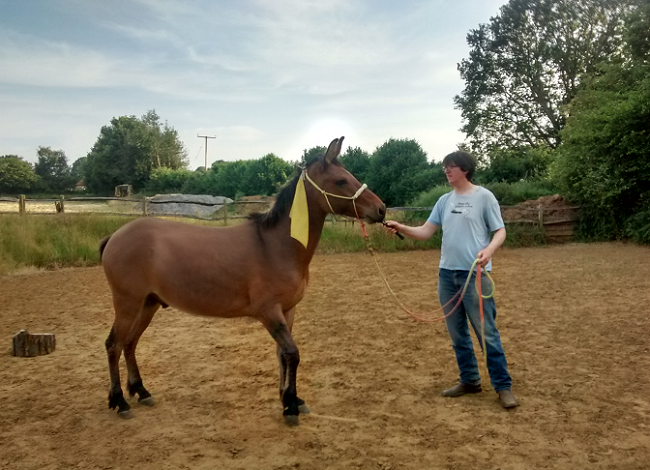 On Monday the equines had their pedicure due, so I brought Cash and Marty in together and popped Cash in the stable to wait. Marty had been absolutely perfect to catch, and he seemed quite bored to find himself in the stable yard; eyes half-closed, ears flopped, he ignored everything around him until Cash started to scratch his bum on the stable wall. The change that came over Marty was hilarious – his head and ears went up instantly, and he stuck his head over the door to gaze longingly at Cash with an expression that clearly said: “That is awesome! When do I get a go?!”

He was the best he’s ever been to have his feet trimmed (although he’s usually pretty good anyway), and when I swapped him and Cash over he was so eager to get into the magical butt-scratching stable that he tried to go in before I’d brought Cash out. But he listened to me, stopped and backed off when I asked him to, and then put himself neatly inside. He munched on hay and chilled out in there during Cash’s trim, which was the first time he’s been able to stand in a stable without attention-seeking or making me worry that he might jump out.

He is a very fine mule. 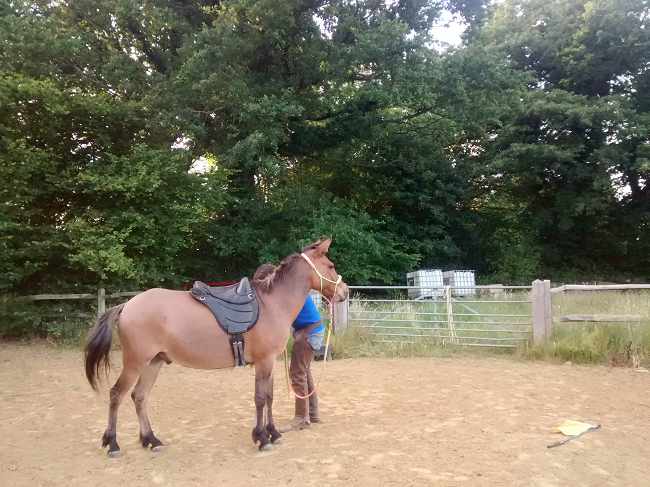 His arena sessions have mostly centered around the saddle, and he is now able to stand for it to be swung on and swung off – girth and all. This is a massive change for him, as before (if we managed to get near him with it at all) he would flinch and swing his barrel sideways whenever the saddle was put on, and run out sideways when it was taken off. He still carries tension, but he’s making progress there.

When asked to move with the saddle he is anxious to begin with, and either humps his back or has a bit of a sproink around. At first I thought it was due to changes in energy, or possibly Marty testing his boundaries, but Ben figured out that it was the girth and the girth tightness that was bothering him. So Ben did a little more work with the rope round his belly, which he’s had before; but this time Ben put more time into alternating the pressure of the rope as Marty moved around at walk and trot.

The rope work was troubling for him, but he tried incredibly hard. 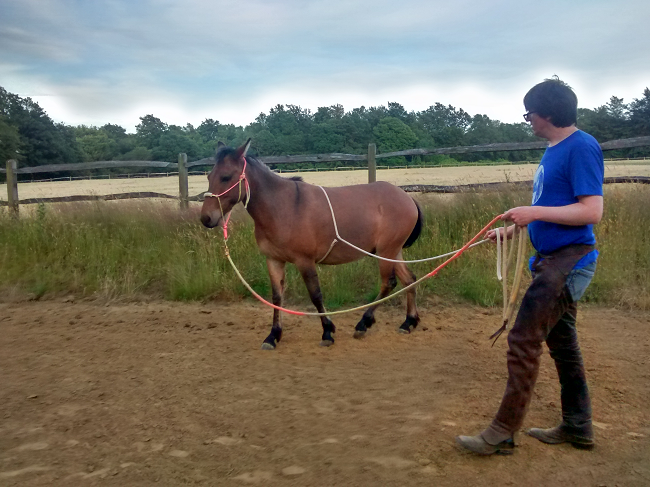 Marty has also been introduced to a third gait under saddle and has been asked to canter with it. The first time Ben asked, Marty tucked his back legs right underneath and took several rapid steps before cantering for a couple of strides, bucking, pulling loose and jumping up onto the bank at the side of the arena. I held my breath, thinking that we were going to have a wreck like the last time he pulled loose while wearing a saddle, but to my amazement he just stood and waited for Ben to retrieve him. Again, a massive change. The Marty of a few weeks ago would have charged round that arena, bucking and kicking until he’d worn himself out.

I’m not sure what Ben is doing, but I liked the photo! 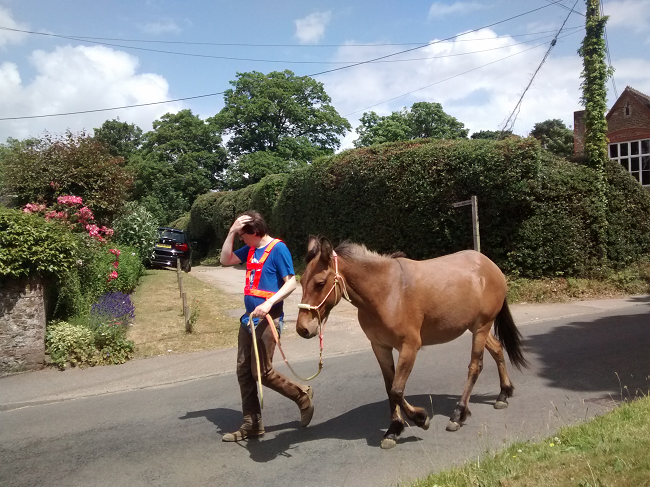 Ben explained that asking Marty to canter was really important, as it showed him that he actually could run. Before, he was of the opinion that we may have impeded his ability to escape should danger arise, but now he knows that we’ve not compromised his safety at all. This may seem like the exact opposite of what you’d want, but if Marty feels like he’s in trouble we’d rather he just moved out – and found that he was actually fine – rather than getting ‘stuck’ and leaping up and down. Hopefully this realisation will elicit another change in him and help to expand his ever-growing confidence.

Marty is king of the village. 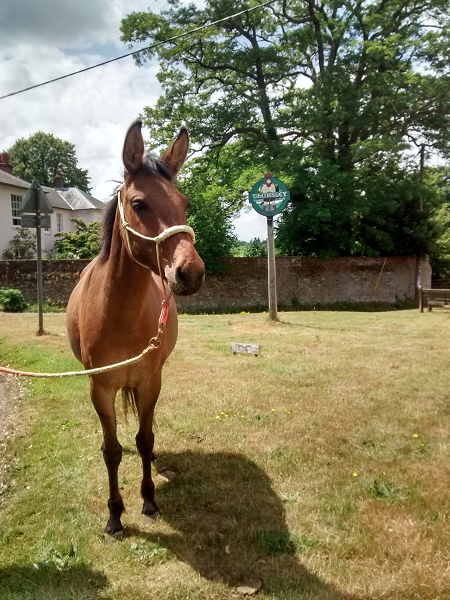