I didn’t do a blog post last week as I was very busy and drawing a blank when it came to potential topics. This week was no better, but partway through Friday morning it occurred to me that I could do a Day In The Life type post. I had already taken various pictures of my day (I am unapologetically snaphappy – follow Mulography on Instagram if you don’t already!), and I love seeing other people’s DITL posts because, well, I’m very nosy.

I got up at 5am to turn Xato out. Iris is off grass completely at the moment, so someone has to stay on the yard with her overnight – that someone is Xato, as it does him no harm at all to be limited in his grass intake. I turn him out for a few hours in the early morning when the sugar levels are at their lowest, and Iris gets a haynet. Xato was not sure he wanted to be out in the field this morning. 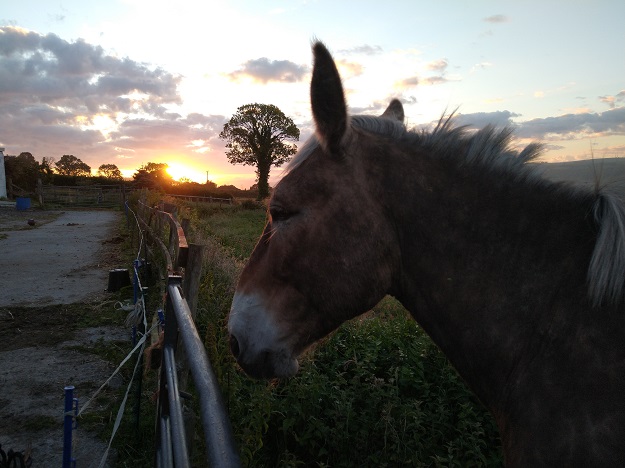 Normally, if I was feeling semi-practical, I would then spend a couple of hours getting all the yard chores done and then go back to bed until 9am. If I was feeling super practical, I would spend a couple of hours getting yard chores done and then start my day by getting on with some work. Friday was more of a mediocre day. I went straight back to bed and overslept. When I got up, the boys were waiting to come in and Marty, sadly, had already died from hunger. 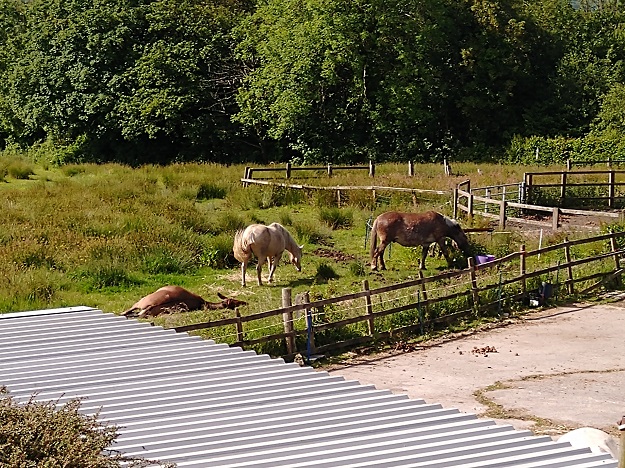 I bought them all in – Marty having made a miraculous recovery – and gave them breakfast. Ben had already given Iris her special tonic from Trinity Consultants before he left for work at 8am, which is honestly more than she deserved, given that she’d done this to the round pen fence. 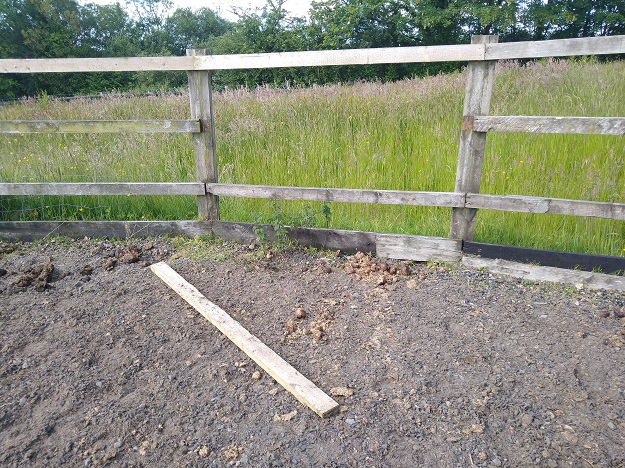 I fetched a hammer and set about hitting things, which caused the neighbour’s dog to shout furiously from beyond the treeline. Sorry, neighbours. The fence looked as good as new and I didn’t lose any more fingers which I was honestly surprised about, because I am very bad at being useful. This was a great day. I took a noble photo to remember my momentous achievement, and reflected upon how uncanny my resemblance to Ronnie Corbett is. 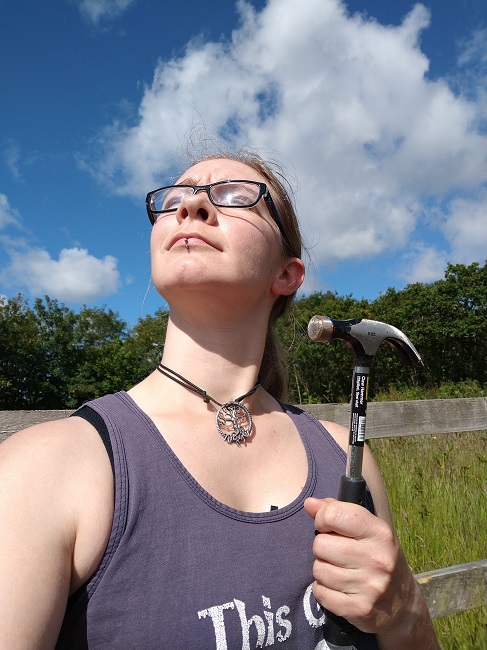 Breakfasted and released from their temporary cells, the herd enjoyed a morning game of D&D by kicking their D20s around. Well, Iris and Xato kicked them around. Marty and Cash have never really figured it out, so I scatter a handful of loose pony nuts across the yard for them out of sympathy. 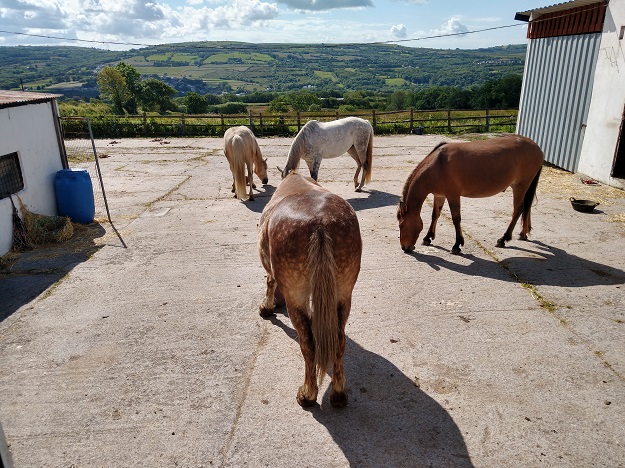 Ugh, soaked hay. What level of hell did this task arise from. I’d had nets soaking overnight, which I hung to dry on the gate, and refilled the bins to put new nets in. The refilling is the irritating part, because I loathe wasting water – and having to fill three bins every day feels wasteful enough – but I also don’t want to stand there watching them fill. I try and do small tasks in between, but inevitably misjudge my time and come back to find them overflowing. 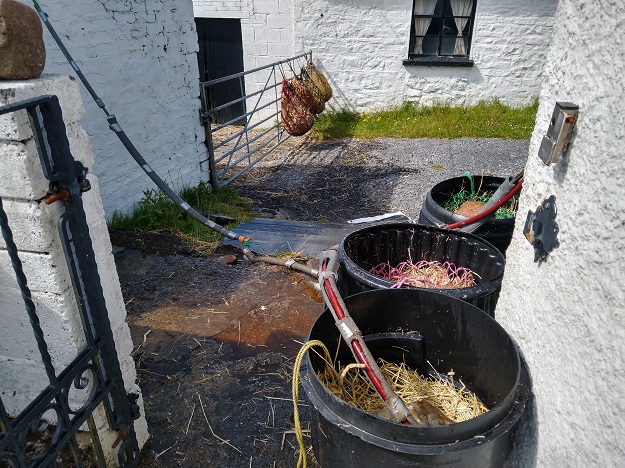 One of my while-the-bins-fill tasks was to hang the laundry out. The washing line has seen better days, but there are plenty more days to come from this vantage point. Our garden is rewilding, by the way. That’s what I tell myself anyway. It’s just that we might have to mow the area around the washing line so that sleeves and trouser legs don’t dangle in the wet grass. 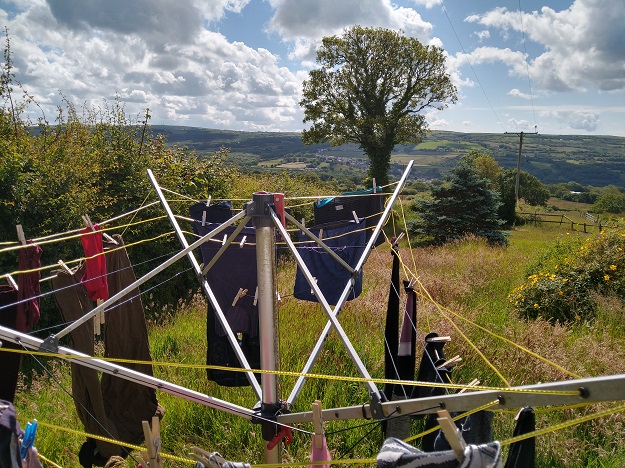 Time to pick up some poo. The herd are enjoying their usual post-breakfast snooze in the round pen – Marty often has a lie down around now. He was not happy these last few weeks as it was usually too wet to lie down and be comfortable, so he’s been making up for lost inactivity. 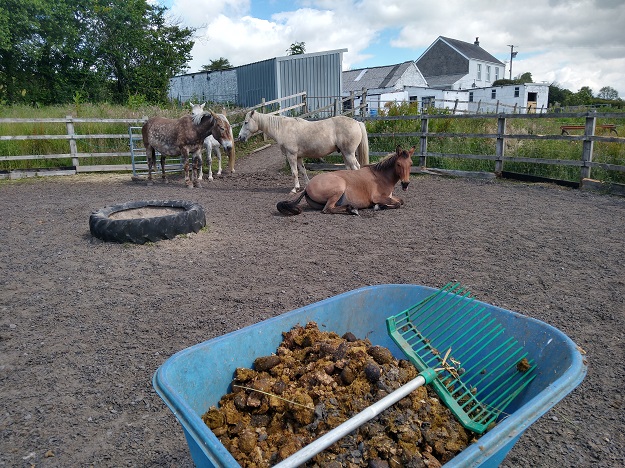 The cat would like me to know that she is VERY HUNGRY. I feed her. Peace is restored. 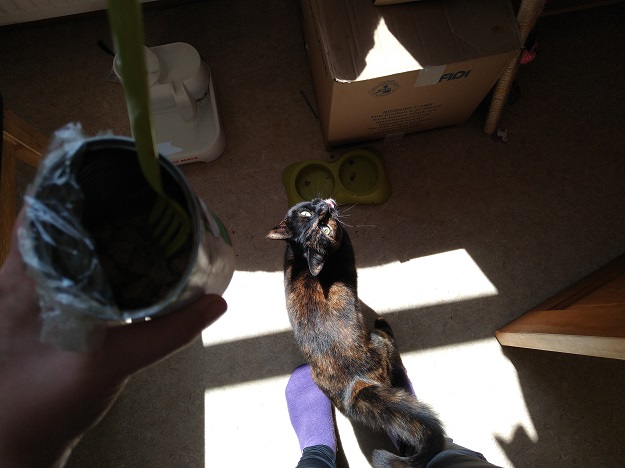 Time to do some work. My back problems suggest that I should probably be sitting at the table, but I like to live dangerously. 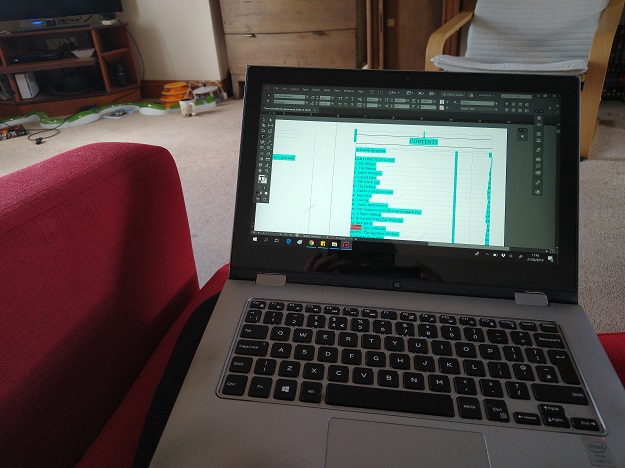 I lose track of time, and give the herd their lunchtime hay ration rather late at 2pm. Don’t worry, I’d left them with the remnants of last night’s hay and had topped up their barley straw supplies – they weren’t hungry. Xato is the only one who actually turns up for hay time, anyway. What a surprise. 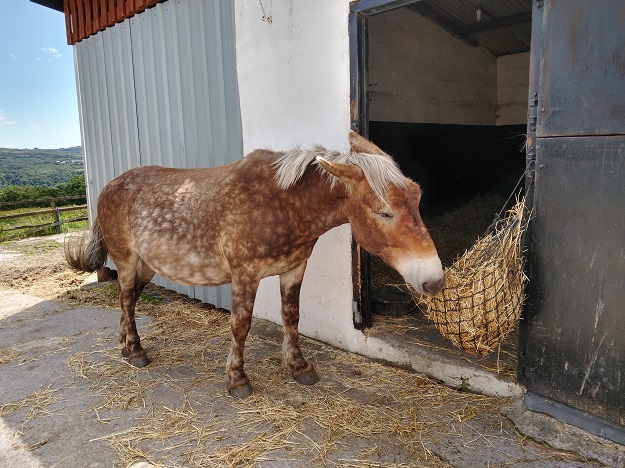 It’s around this time that I realise it’s the summer solstice – I’d thought it was on Monday (it’s midsummer on Monday, but not the solstice … I don’t really understand). It occurs to me that it might be nice to celebrate by making soup for dinner with nature’s bounty! I pick nettles, dandelion leaves, and pull up a couple of my potato plants. They are very small potatoes. We have very stony soil. 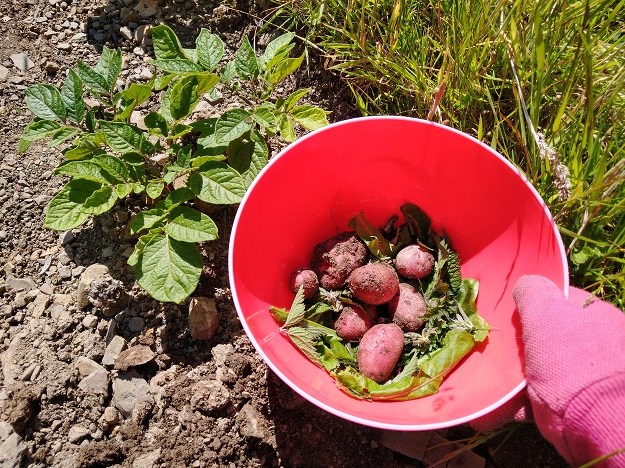 I did not pick enough nettles, so I go out and fetch some more. Marty comes over to check on me as he thinks I’m a bit weird, but also because I might be persuaded to pick him a little snacky while I’m at it. My nettle soup recipe was based on this one from River Cottage, although my ingredients were thus: 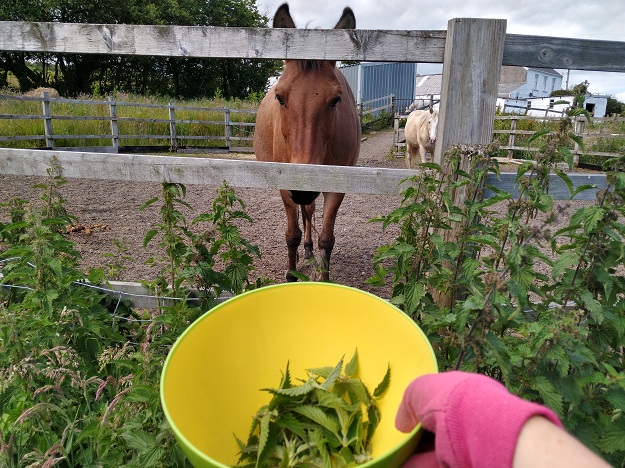 My cat has also had a busy morning, working hard as our perambulatory duster. I don’t even know where she got these cobwebs from, I was pretty sure she’d dusted everywhere by now. She is telling me about her day in great detail and I am pretending to know what she’s talking about. 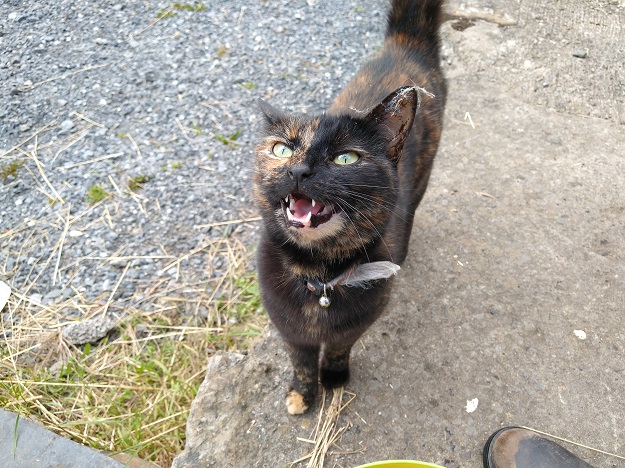 Having sent my edits in earlier, I can’t do any more work until I hear back from my client. At 4pm I decide to seize the opportunity and take Marty out for some exercise – after a quick sandwich, as my stomach reminded me that I hadn’t eaten yet. Marty rears up as I’m knotting his halter, which is disappointing as that used to be his trademark move and he hasn’t done it since coming back from Anna’s in 2016. I don’t react, allowing myself and the rope to move with him, so he has nothing to pull against and the halter – though not tied – remains on his head. He is non reactive after that, and when we get back from our walk dutifully lowers his head and allows me to remove the halter without any worry. Phew. 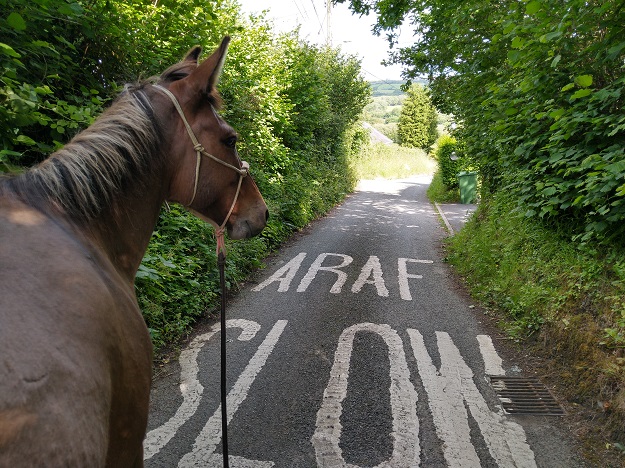 While we were out on our walk, Marty found a rotten, mossy tree branch that had dropped and shattered on the road. I suddenly remembered that I’d wanted to gather some moss for a moss garden, so I put as much as I could into the pockets of my hi vis vest and carried the rest. I did wonder why the drivers of the two vans that passed us later looked at me so weird, but I guess a girl walking a mule – he wasn’t wearing packs today, so he didn’t even appear to be serving any purpose – with moss hanging out of her pockets was a little unusual. 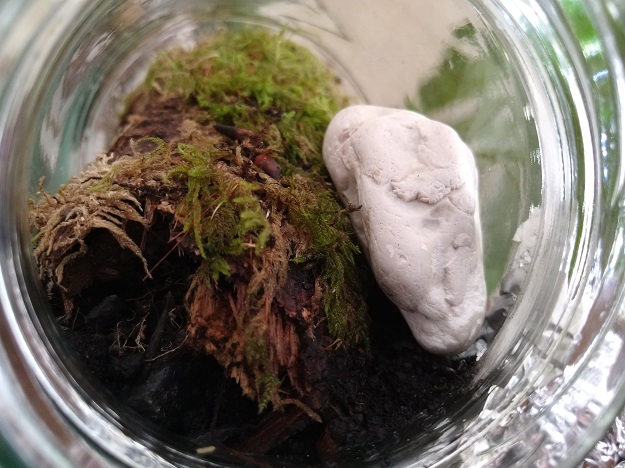 The cat has more things to tell me. But what are they? Will we ever unravel the mysteries of felinekind? What if she’s trying to tell me the secret to everything and I’m just too dense to hear it? It’s a heavy burden, being a cat. 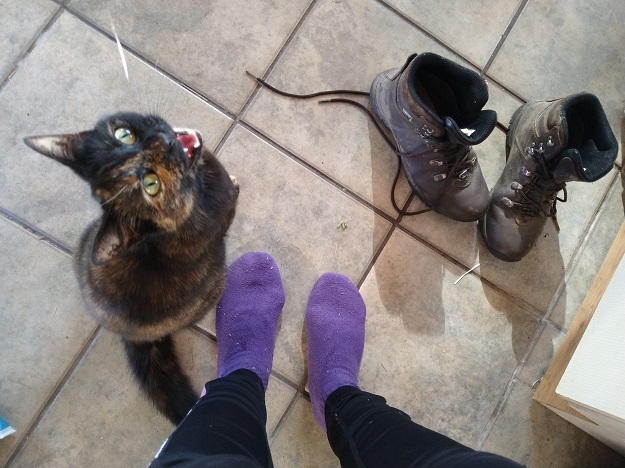 Marty and I got home half an hour before Ben was due to return. In a flash of inspiration, I drag our events table and folding chairs up to the wendy house and set up an al fresco dining experience. It’s ready just as he pulls into the drive which I’m pretty sure earns me some top wife points. That is Las Mulas wine, obviously. Unfortunately I’d forgotten that Ben was recording this evening for his podcast, but luckily timing was good and we didn’t have to hurry dinner. It was a lovely evening, and Xato even serenaded us by kicking the empty D20s around CONSTANTLY just in case they were going to magically refill. He literally hadn’t touched them since this morning, so really his timing was impeccable. 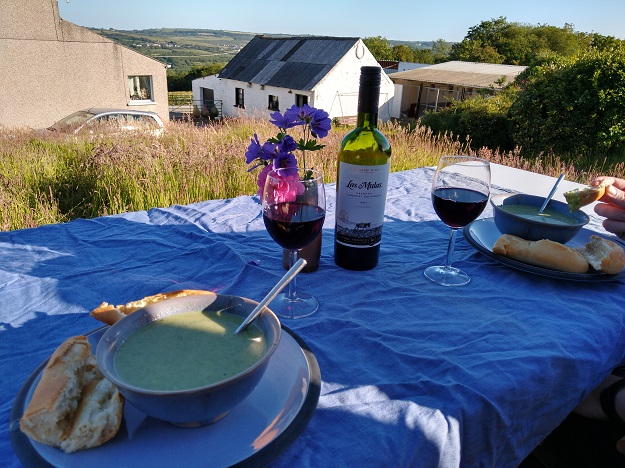 Everyone gets evening feeds at 8:30pm, and Cash and Marty go out for the night just before nine. Iris and Xato get a token refill of the D20s, just so they don’t feel too hard done by, and I also hang up their night nets and top up their straw. I am tempted to have a little sit on Xato, but he’s not supposed to do any work for two days after his Bowen treatment so I refrain from doing anything that might jeopardise that. Instead I am extremely practical and clear up more poo. There is always more poo! 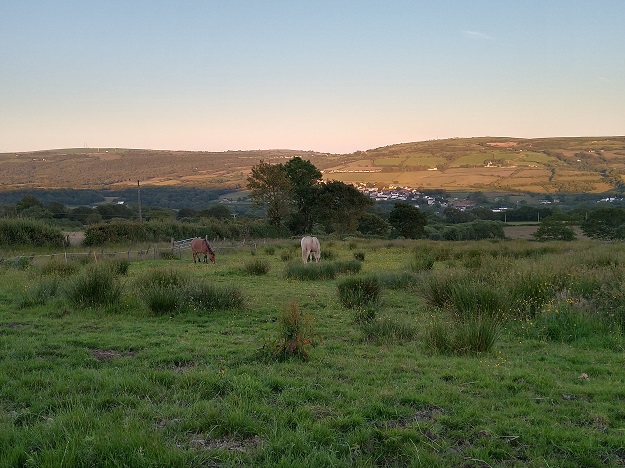 I am coming to the conclusion that I spend most of my day being shouted at by the cat. She comes in for the night and I give her some supper. 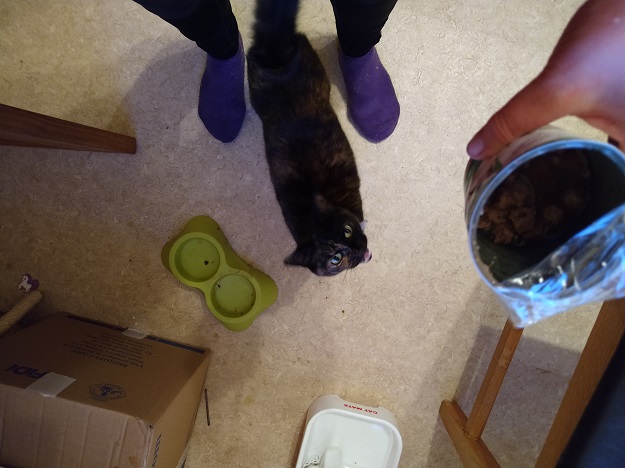 Back to work and then, eventually, bed. The front of my fleece is an unfortunate shape. I care not. I also put together the majority of this post, which is rather meta I guess. 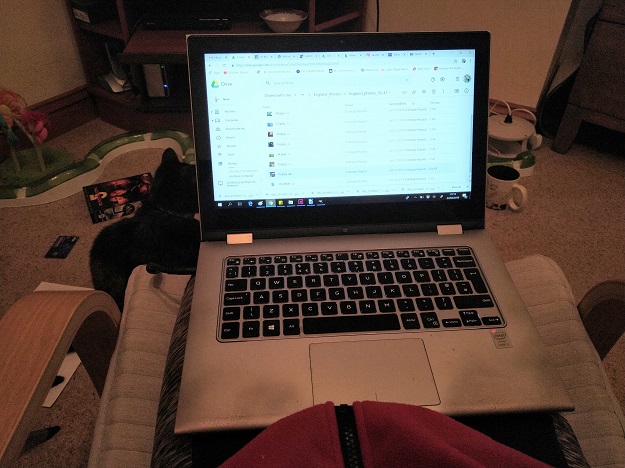 How about you? What did you get up to on the summer solstice?