We introduced Joey to the herd today. He’s been sharing a fenceline with them for the past week, and as today was actually dry (a true miracle) and Ben and I were both working from home, we decided to go for it.

We took down the electric fencing that had separated the top half of the five acre field into two paddocks, leaving the entire area for them to roam in. My thinking was that more space means they’re less likely to run into any fencing or fall over while taking a tight corner; this is true, but I also discovered that more space allows them to follow a more ‘natural’ herd introduction, like they would in the wild.

This gets a bit wordy, but I’m going to share my observations because I found it super interesting watching their herd dynamics. I’ll drop a few photos in to keep it from being too boring!

We put Joey out into the field and then let Cash out with him. Cash is the “boss” of our little herd, meaning that he is the decision maker. He chooses where they graze, is first in line for the water trough, and when they have haynets he will move the mules on in order to sample their nets just in case they’re better. The mules of course are pretty independent and will make choices for themselves (for example, I often find that they’ve brought themselves onto the yard while Cash is still out grazing by himself in the field), but if Cash tells them to do something, they do it. 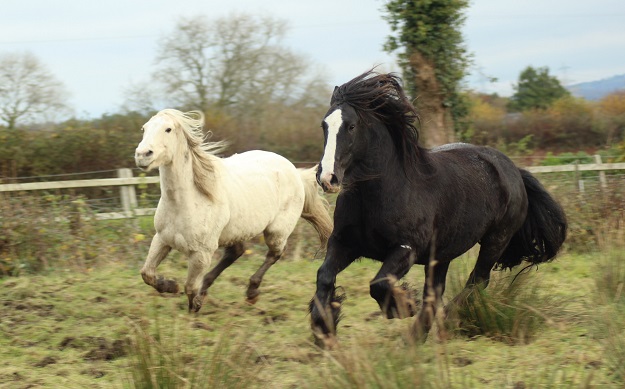 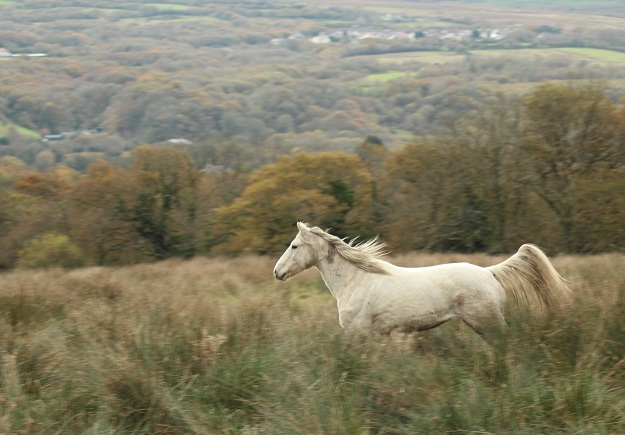 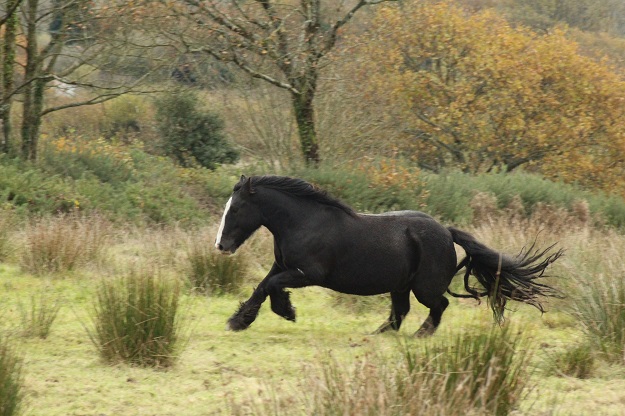 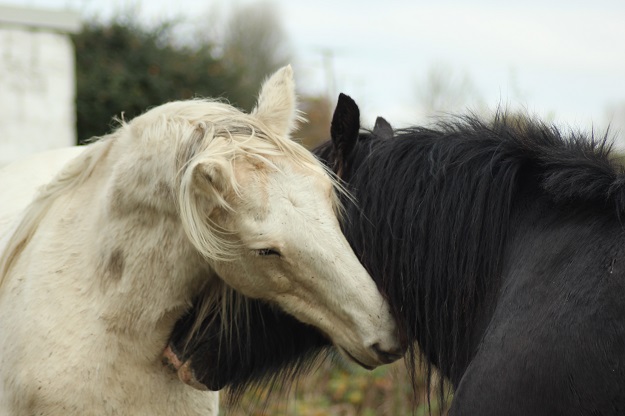 Cash was extremely excited and there was a lot of running round for five minutes or so, before they settled near the yard and had a tentative, polite mutual groom. Cash had his ears forward for most of the interactions and only squealed once. When Joey first arrived, Cash spent so much time roaring and bellowing at him over the fence that I was surprised our neighbours didn’t come round to ask if we’d started raising dragons.

Eventually Cash put himself back into the round pen and Ben opened the gate to the let the mules in. Marty and Cash gathered by the second gate, the one that leads into the field, and Joey came over to check out this new friend. Unfortunately, Cash pulled a face at him and Joey retaliated by lunging at him with jaws agape – the only offensive action I saw from him all day. 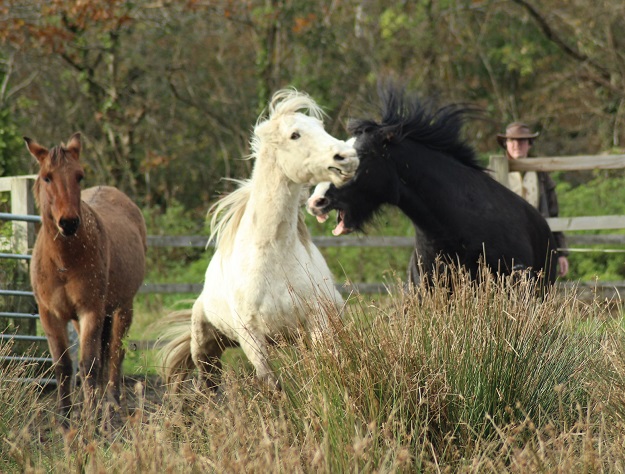 Marty was NOT impressed. Strangely, although Marty is bottom of the pecking order as far as “who moves whose feet” is concerned (he will argue with Xato, but Xato will always move him off limited resources such as hay), his role in the herd is as its protector. I saw this behaviour when we got Xato but didn’t understand it at the time.

So Marty immediately gave chase, grabbing hold of Joey by the tail and hanging onto him for an entire lap of the field. Cash joined in the chase. This had a very strong impression on Joey, who removed himself to the other side of the field and stood in what I’m going to call his Thinking Spot. 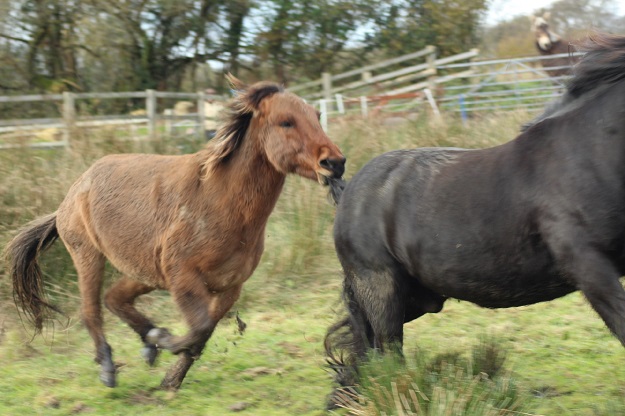 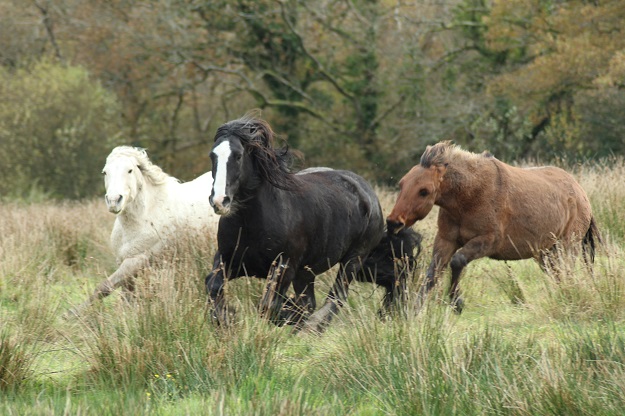 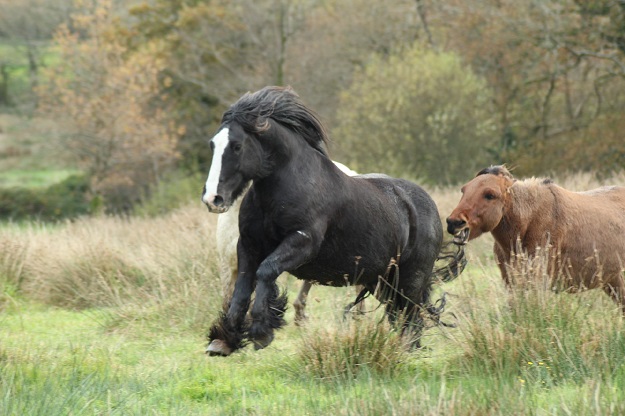 Throughout this, Xato had very deliberately kept himself out of the way in the round pen. He did not want to be involved in any of this running about nonsense, thank you very much. Once Joey separated from the others, he joined Cash and Marty and the three of them began to graze in tight formation on the right hand side of the field. I was interested to note that they paid absolutely no attention to Joey, still standing quietly in his Thinking Spot; I was watching closely for someone’s ear to go in his direction, or for someone to give him a covert glance, but there was nothing. Apart from the deliberate way they were grazing together, it was as though he didn’t exist.

Joey stood and thought about things for about ten minutes. Remember that before he came to us, he hadn’t lived with any other equines for three or four years. He clearly understood social rules, but it seemed to me that he was in need of a refresher course.

For example, his next move was to leave his Thinking Spot and make a bee-line for the herd. He didn’t rush them, but he walked in a straight line and without stopping. This was very bad manners of him and Marty told him so, clearly. After another mad run around, during which Xato finally got overexcited and joined in, Joey returned to his Thinking Spot in the top left corner and the other three boys went back to grazing. 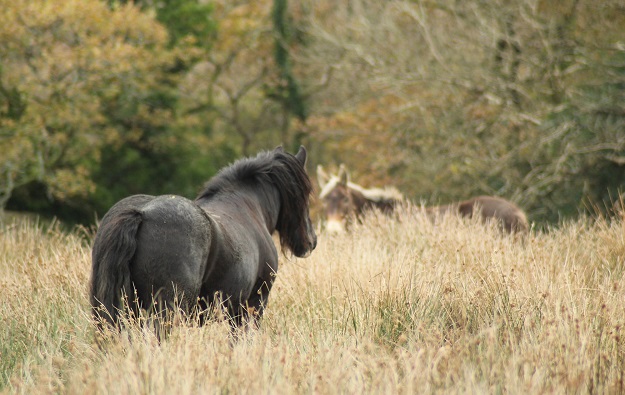 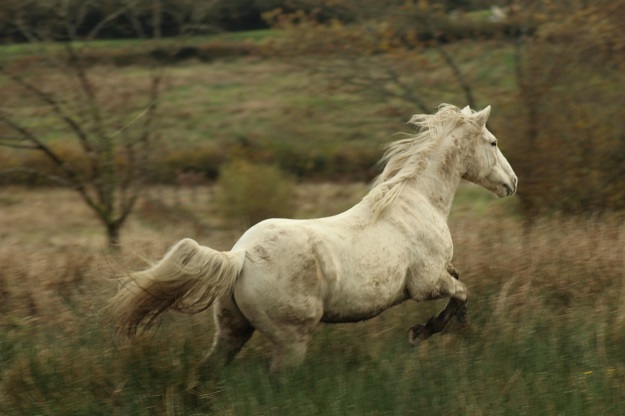 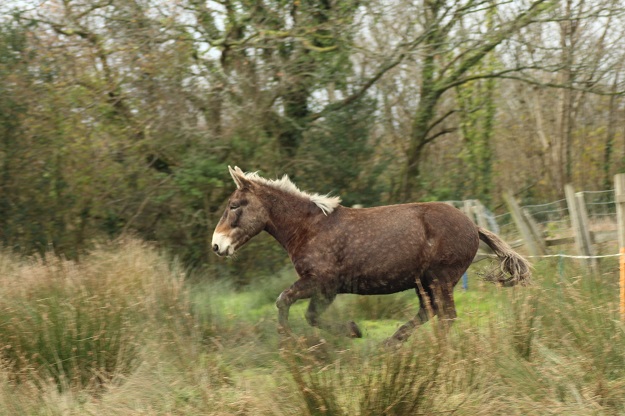 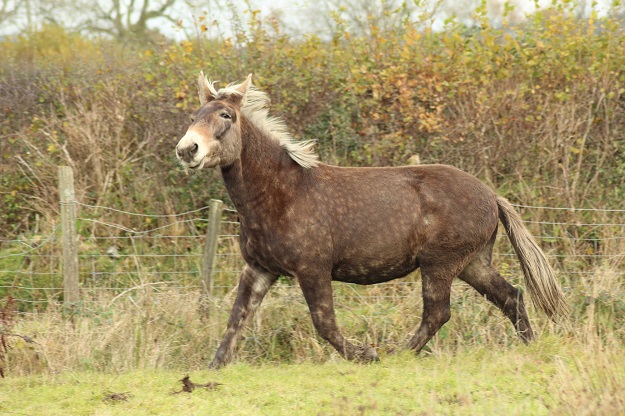 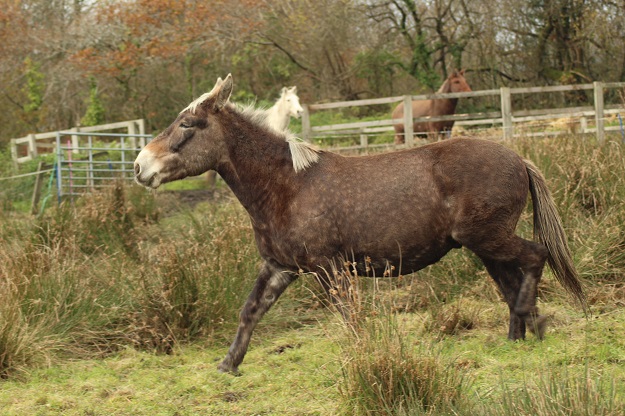 This time, Joey stood and thought for about twenty minutes. During that time Cash and the mules had grazed their way slowly across the bottom third of the field and then slowly up the left hand side, their tight formation gradually relaxing until Marty was out on his own – between his buddies and Joey – and Cash and Xato wandered off to graze further down the hill.

Joey began to move down the field towards Marty, grazing nonchalantly as he went, and moving in arcs – no direct approach this time. Marty alternated between grazing and watching, but there was nothing about his body language that suggested animosity.

Joey came within about ten metres of Marty and then gently arced around and began to graze his way back up the field before walking directly back to his Thinking Spot. Nothing had occurred when he came close to Marty – nothing my stupid human eyes could see, anyway – but it seemed like a very deliberate choice to turn back. His movements remained smooth the whole time. It certainly pleased Marty, as he watched Joey go before turning round and heading back down the hill to join Cash and Xato, pausing for a roll on his way.

The rest of the afternoon passed peaceably, with Cash and the mules grazing in one loose group and Joey grazing alone on the fringes. This was when I realised that they were interacting much like a wild herd would, with the newcomer gradually asking for acceptance from a distance. I am so pleased we now have a life where we can offer them that freedom.

Much later, just before I was about to go out and separate them for the night, Cash and the mules came up to hang out in the round pen. They knew dinner would be on its way soon and they couldn’t come up onto the yard and chew on straw while they waited, like they usually would, as I’d closed the gate (I don’t want Joey on the concrete with them until they’re peaceful in close quarters).

When it became clear that no one was going to open the gate any time soon, Xato went back out to graze in the field. Joey was grazing over on the left, and Xato made his way slowly over to him, grazing all the while. Eventually both he and Joey seemed to come to a silent agreement because Xato walked right over to him and they began the softest, most gentle version of ‘bitey face game’ I have ever seen – they were essentially just pressing their faces together. It was extremely sweet and the late golden light gave it an extra romantic edge. I thought my heart might pop because I love that big kind mule so much.

Once they’d stopped doing whatever it was they were doing (and I didn’t get this part on video, unfortunately), Xato stood guard for a few minutes while Joey grazed. Then Xato started to make his way back to the round pen and Joey immediately fell into step beside him, the first time I’d seen him follow another member of the herd. He wasn’t brave enough to go with Xato all the way to meet the others, but it was still a lovely moment.

I think it was probably more exercise than Joey has had in a long time. As Ben reflected, it was unfortunate that Marty is the ‘bully’ AND the fittest member of the group. Poor Joe!

For the time being we’re leaving Joey in the field and putting the other three on the yard overnight. I don’t really want to keep separating and reintroducing them (although they’re only separated by a fence), but as we have so many hours of darkness now I know I’ll lie awake all night worrying about them if I leave them out. Once Joey is allowed to graze with the others I’ll be more relaxed about it.

I’ll leave you with a few other photos of the team. Thanks to Ben for suggesting that I charge my camera battery; I haven’t used my proper camera in a long time, and I couldn’t find my telephoto lens so had to make do with my very old lens which has to be coaxed into focusing, but I’m glad I did it all the same. Taking photos is fun! 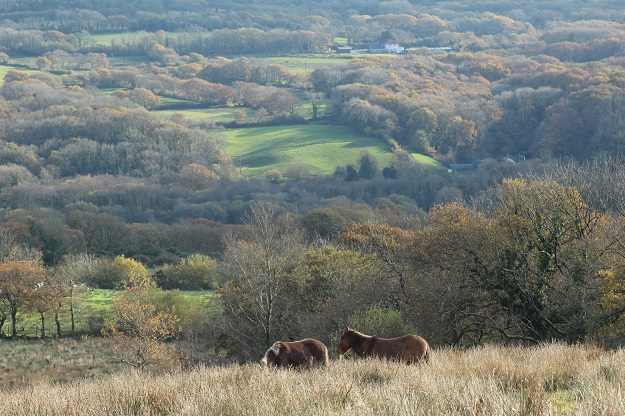 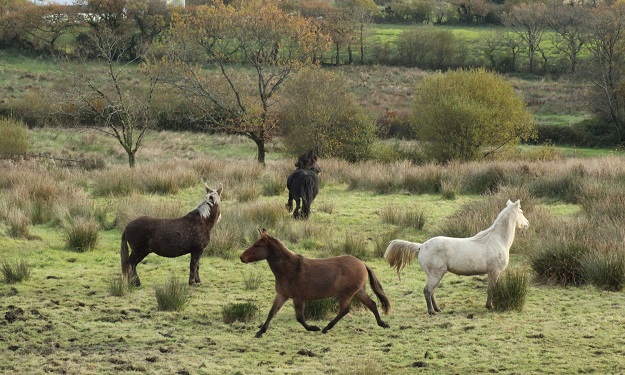 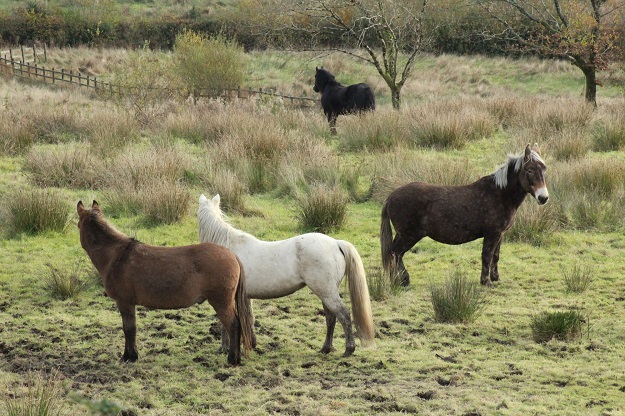 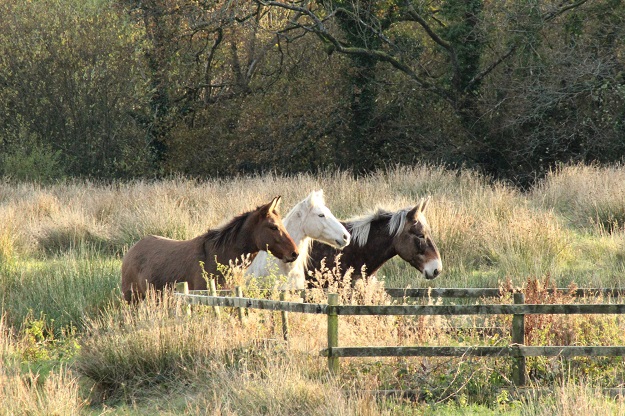