After Iris died, Ben decided he would get another horse but he would take his time about it. He wanted a youngster, something unbacked or recently backed – a clean slate, in other words. As he’s 6’2″ it would need to be in the region of 16hh, and ideally of an athletic build in order to do the kind of work under saddle that he had been building on with Iris.

I tried multiple times to steer him towards another mule or even a Mammoth donkey instead, as I have renounced horses and it’s longears all the way for me now.

So anyway, when the bloke fixing our roof said he had a pony he wanted to rehome and we could have him for free if we wanted him we obviously said yes. 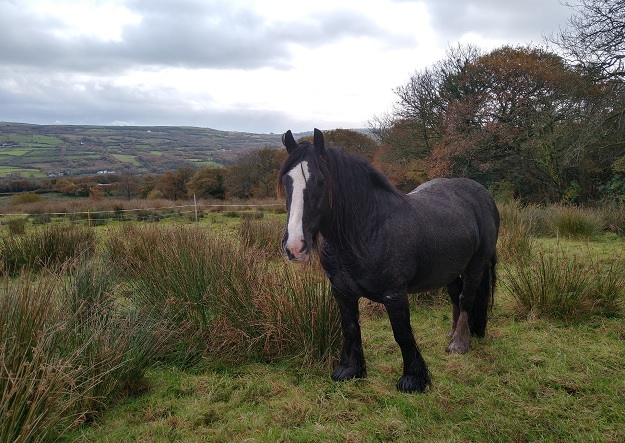 Joey is about 12 years old (we’ll ask the vet to age him when she checks his teeth next week), around 14.2hh, and was sold to his previous owners as ride and drive. He’s been out of work for 3 years and has been living on his own for at least that long, barring the occasional company of cattle.

He’s a very sweet-natured boy with a ludicrously unflappable nature; although he’s quite polite and doesn’t push on people’s personal space, he also won’t get out of anyone’s way even if you jump up and down and wave a flag at him. Ben’s suspicion is that he’s soaking up worry rather than being oki with it. Either way, as lovely as he is he won’t be what we’d consider safe until we can get that responsiveness from him.

His response to me holding up the flag for him to touch (I was curious about how he’d respond) was to put his head through it, completely unfazed as it covered his eyes and slid over his ears. 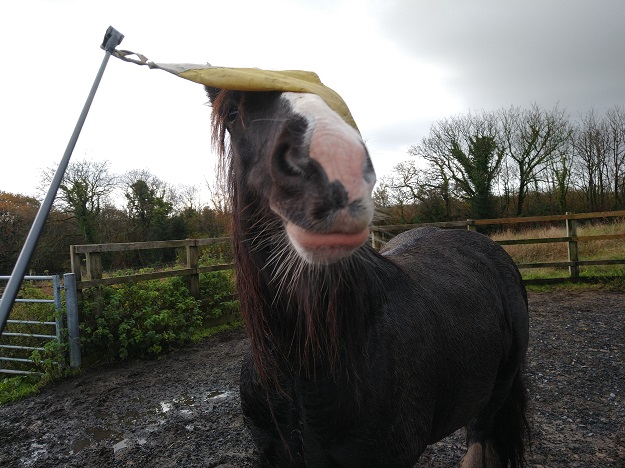 Hearing that he lived alone was honestly one of the deciding factors in saying we’d take him. I was curious how he’d respond to our three, as I remembered the little Arab mare we used to share livery with and how neurotic she was. She had never lived in isolation like Joey, but she had always lived in solitary turnout and was very unsocialised.

I built a temporary separate paddock for him, sharing a fence-line with our herd, and included the round pen partly so he’d have somewhere with dry footing and partly because we weren’t sure how easy he would be to catch. After turning him out he touched noses over the round pen fence with our three eager boys, and then initiated grooming with Xato. It was so sweet and so unexpected. Usually when you introduce new horses there’s a lot of squealing and striking, and – knowing his living arrangements – I thought it would take him some time to adjust to having neighbours. Things might go differently once we introduce him into the herd but for now he seems like he’ll fit in pretty well with them.

That’s not to say that there wasn’t a lot of noise – Cash Pony considered it a wonderful opportunity to do his Great Silver Stallion impression, and spent the first 20 minutes alternating between roaring at Joey and licking him.

Even more sweetly, Cash Pony and the mules have taken it upon themselves to look out for their new brother and refuse to leave him. They didn’t want to come round the corner for their dinner this evening, and when he’s standing in the round pen they’ll hang out in the muddy gateway with him rather than eat their hay on the yard or go into their field to graze. 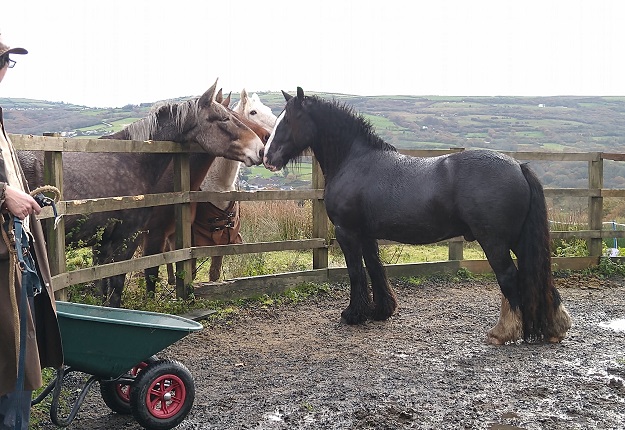 Saying yes to a random free horse may not be the smartest thing we’ve done, but free equines have worked out pretty well for us in the past…! Plus, today is also Xato’s third Gotcha Day, so it seems like an auspicious date and we figured any equine who arrived today must be a good one.