This week we’re in Finland, with Kaisa and her Spanish molly, Muuli. Kaisa maintains Muuli Projekti, her beautiful blog (and, I think, the blog with the best banner image!).

I’ve really enjoyed watching her journey with Muuli, and I think the story of how that journey started is an absolutely brilliant one. Many thanks to Kaisa for sharing it with us!

Images in this post are © copyright to Laura Lappalainen, Nina Rintala, Anu Kokkonen and Katri Määttänen. 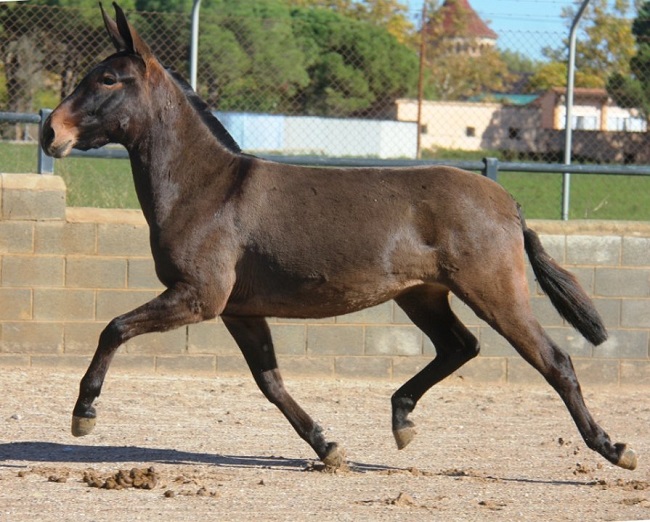 When I was 15-18 years old, we had a donkey jack and a Shetland gelding in our home. I’m from the countryside so we had a stable of our own. Start was very difficult with the donkey but after 5 months I gained his trust and he was good to handle. Soon after that I was in the little group of active donkey people and we started Finnish Donkey Society. I’m society’s president now. So long ears have been in my life for the last 15 years, in a way or another.

I had owned a horse gelding for 3 years. He wasn’t very safe mount outside the outdoor school. He only wanted to be with other horses. He never trusted people. He was easy to handle, saddle, load and so on but I always felt that something was missing. He got all his motivation from friends and food.

Then around 2011 I was riding my friend’s hinny in Finland. Heikki is another of 2 big mules/hinnies in Finland. We were galloping with long reins on the trail in beautiful countryside. Then it just came to me, I needed to sell my horse and get a mule like this!

Later, in 2014, I was on a western riding course at the stable Heikki lives at and I got to ride one lesson with Heikki too. Heikki is a hinny between a finnhorse (Finnish national horse breed that was originally used in the agricultural work, nowadays mainly as trotters and mounts) and 120 cm tall Irish donkey mare.

Here in Finland and we don’t have many donkeys, and only a handful of mules. Donkey amount is about 400, and maybe 15 mules and only 2 of them were “horse sized”, all the rest are small pony mules. So it was impossible to buy a mule from Finland.

First I tried to find somebody with a horse mare and ask if I could cover their mare with a mammoth stallion. One of my friends have mammoth jackstock jack and jenny. But none of my friends had horse mares in those days. Or were willing to cover their mare with a donkey. In fact, some of them were like “that will ruin my mare”. Then in the other hand I found many people that were very interested about mules, just haven’t think about breeding a mule before. But we in Finland are slow and need to think everything for a long time, years.

I calculated how much it would cost to breed my own mule from foal to 3 years old. It cost a lot. I don’t have a stable of my own so I would have needed to keep mare and foal on full livery/part livery. It costs 350-550 euros (300-470 pounds) in our area. So until the foal would be at “rideable” age, it would have cost me a fortune already.

I also thought that I don’t have enough experience to train a foal by myself.

That was the reason I started to look for a mule from somewhere else in Europe. I know a couple of words of German and looked at mules from there, but most of them looked like little fat pigs with thin legs. I wanted my mule to look sporty and elegant. I think that mules in South-America look good so I thought that there must be mules like them in Spain or in Portugal.

Portugal turned out to be a bit difficult, when they don’t register mules at all but if I wanted to get a mule from there, it would have needed EU passport. Then there is Spain. I don’t know a word of Spanish but I looked at their local animal ebay and was like “wow, I need to get one of these!”. Most of the mules looked like German ones, fat little mules on small legs. But there was also some very good looking mules and if their ears were photoshopped shorter, no one would have noticed the difference between them and horses.

After this I found a Finnish lady who seeks PRE horses for customers all over Europe. She doesn’t buy and sell horses, just looks for the horse and she works as a translator between the Spanish seller and Finnish buyer. I asked her if she could also look for a mule and I told her what I was looking for. I was looking over 145 cm tall and over 5 years old, trained mare that is kind, calm and safe to ride/drive. 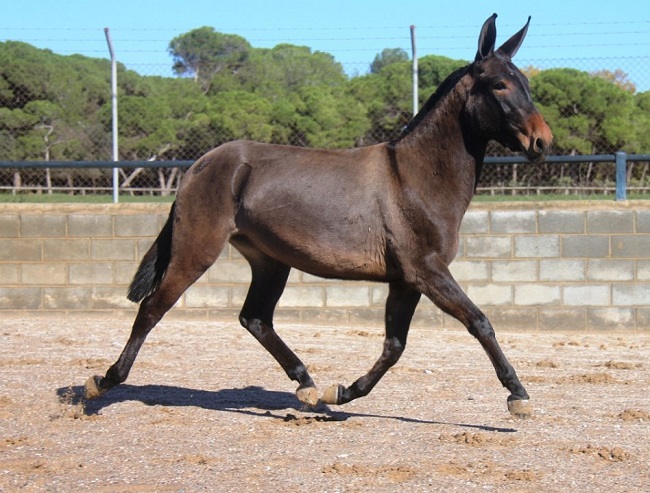 I contacted Sunhorse in autumn, I think it was September. I got news every 2 weeks that they have contacted the sellers but the mules had turned out to be something else than what they were supposed to be. Not trained, not well cared for and so on. And some of them were very expensive! I had a budget of 4000-5000 euros. That is 3160-3950 pounds. the transportation would cost 1750 euros (1380 pounds).

Then I got great news in November 2015. They have found two mule mares that were half sisters. They were supposed to be 158 cm at the withers and they both were 3 years old. I got pics from them and they both looked so good! Just like horses. And they moved well. I needed to make my decision quickly so I said that I will take another of them, if I just get some more information about which one has the better nature/movements and so on. I was told that mule “Nepal” was more trainable than her half sister “India”, so bought Nepal.

I had already had a plan that I would leave the mule in Spain for training for 2 months. It had two reasons: cold winters in Finland, and she needed to be accustomed to handling when she was going to the livery stable in Finland.

I had my mule in my stable yard in the middle of February 2016, 3,5 months after I bought her and she’d stayed in training. But, she was not Nepal… 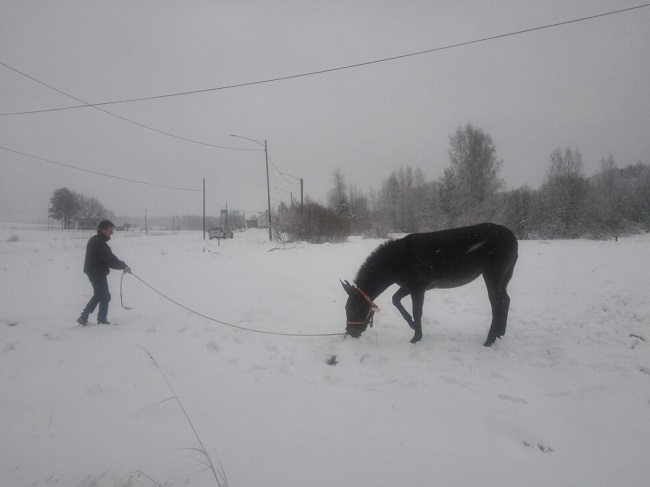 I didn’t get much information about Nepal’s training in Spain, so I thought that everything was going well. I organized her a place in the stable and just waited. Then in January I got news that Nepal had not done great in training and I could leave her in training for free for 2 more months or I could change to her half sister India who had been in training and for sale in another stable.

I thought that if they have not improved in 2 months, they would ruin the whole mule in next 2 months. I didn’t have any idea how they had trained and handled her, but this sounded a bit weird. I was told that training is mule friendly, but how could I know? I just needed to trust them.

I got lunging videos from India from the other stable and decided to change to her. The price was the same (2250 euros/ 1780 pounds). We decided the day for her transportation, the Sunhorse company organized it.

Then I got news again. Even India is “not good enough” and the stable doesn’t want to give her to me when they want to keep up their good reputation. My patience started to end and after a week India was loaded in the truck and after 8 days she was in Finland. 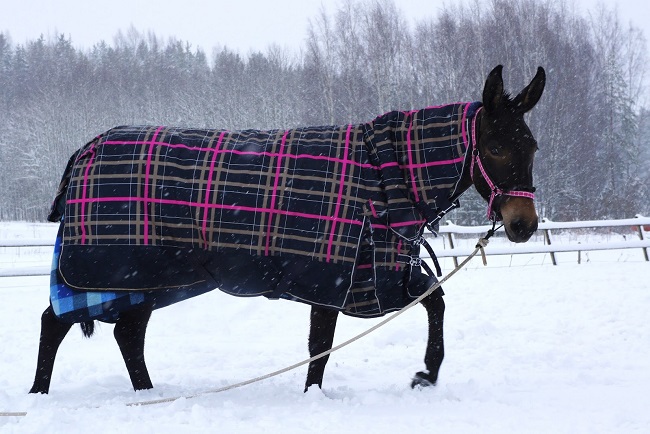 Muuli on her second day in Finland

First surprise was when the driver opened the truck (or is it lorry? It was a big truck for 10 horses) for the first time in Finland. There was the mule, India. But I was told that she was 158 cm at the withers. But she looked more like 140 cm. Oh well, I was also told that imported horses looks smaller after the journey when they are a bit dehydrated. I tried to put a rug on her in the truck because it was snowing, a lot. Didn’t work out. She was very nervous. She didn’t want to get touched at all and was afraid of people. Luckily she didn’t kick, just turned her ass towards me.

She came nicely out from the truck but then a car went by and she almost got loose.

We walked her inside the stable and she was the most shy and afraid horse/donkey/mule I have ever seen. At the first day I was just thinking “what the h*ll have I gotten myself into”. Luckily now after 3 months she trusts me a lot more than before.

India didn’t have any name in her passport so I decided to name her by myself. in February and March the name suggestions were like “shy meatball” or “delicious entrecôte steak” in Spanish. The start with her was very difficult. Then something changed and in only two days she started to follow me in the pen and wasn’t that spooky anymore. So I named her Buena Chica, which means “good girl” in English. I still call her Muuli though. Muuli means “mule” in Finnish. 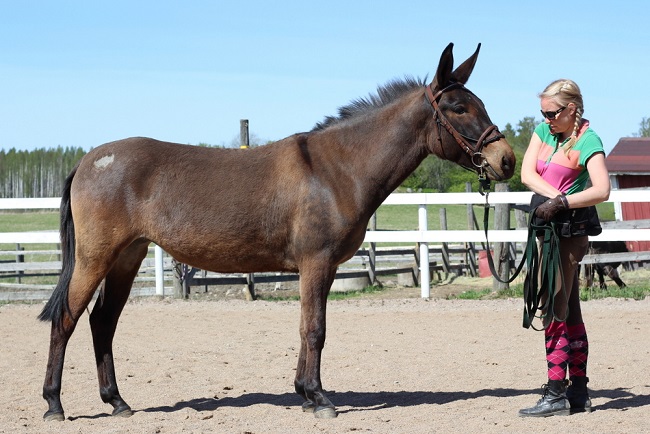 Even though my mule is 13 cm too small and I didn’t get enough information of her before I decided to buy one, I still think that if you don’t know the language and you don’t live in Spain or in the country you are buying the mule, try to find someone that imports horses from there. Ask recommendations from horse people. My mule is still gorgeous looking, although smaller than she was supposed to be. Her hooves are perfect and well cared for. She moves nicely. And her disposition is nice. Although she is nervous and very shy, she looks at everything with ears forward and she is very keen on everything that happens around her. As long as she doesn’t get scared.

If you can’t go to see the mule before buying, ask for a lot of videos of it. Ask them to take videos when the mule is caught from the pen, haltered and walked to the stable. How it reacts to brushing and hoof picking, saddle and bridles? Does it let people touch its ears too? Ask for the video of driving/riding. I think that hooves tell me everything important about mules or any equines health. If the hooves are well trimmed and healthy, the rest of the animal is too. So ask pictures of the hooves.

Do never, ever, leave the mule to training unless you are absolutely sure that the trainer knows what he’s doing. Ask videos every other day. That is the only way to see how things are going. Picture is a short moment, shorter than a second and doesn’t tell you anything.

Mules change a lot when they are sold and moved to new place to new people but when you have the videos, you know that some day your mule will be the same mule you saw in the videos.