The Tevis Cup is a 100 mile ride in California. The aim is to complete it within 24 hours, and it holds the title as the oldest modern day endurance ride. It has never been won by a mule, although two have claimed the Haggin Cup – which is an award for Best Condition at the end of the race, available only to the first ten riders to finish successfully.

This year saw two mule riders enter, one of which was the magnificent Ears owned by Roger Downey and ridden by Eve Blumenfeld. I am so very excited to be able to bring you their story! Thank you, Eve, for so generously sharing your adventure with us. 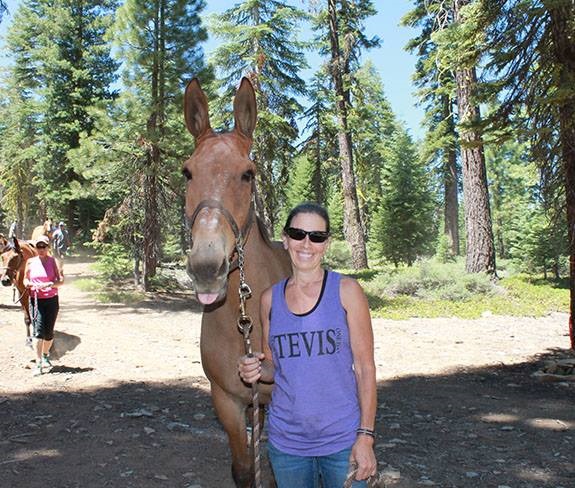 1. First of all, well done on completing such an incredible test of endurance and partnership. Could you tell us a little about your mule and introduce him to us?

So it comes with a funny story. I just got into endurance 2 years ago by doing a Ride & Tie event and ended up loving riding a horse … did when I was a kid. So at the age of 54, having never owned a horse or taken riding lessons, I asked my girlfriend to get me an Arab. She did – an 8 yo 14.1 hands named Tux. I love him. Started our first year on LD, did great!!! Second ride on him I met a man named Roger Downey who was on a mule and we rode most of the season together, although he could never remember my name and he had a different mule each time. My horse had no problems with mules. He did the Tevis that year, 2014, on his mule Jodey and got pulled. The next year I bumped up to 50’s with Tux and Roger on his mule. My Arab was not ready for the Tevis. Roger went into 2015 on his mule Jodey again and fell off and ended up getting airlifted out … I told him he could never do the Tevis without someone, he is 76 years old. So he said ok, do the 2016 Tevis with me I said my horse is not ready, his response: RIDE ONE OF MY MULES! Lol, never in my life had I ever been on a mule.

So I got on the 15.3 hand mule, larger than life and could drag me anywhere he wanted which he did at first and still does (sometimes), and did a few rides with him. Then in November last year I did an LD and we won, did a few more conditioning rides in the winter and Roger said take him home … WHAT. Totally worried about my little Arab but guess who bosses whom around. When I am around, Tux acts like he is boss but when I can spy on them they are like best buddies and teenage boys always getting into trouble. 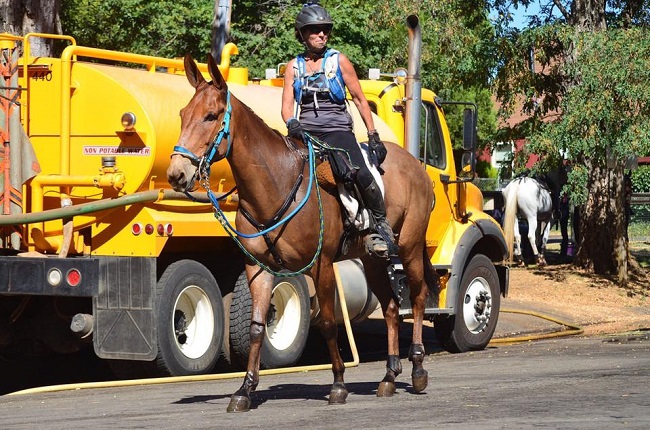 2. What was it about Ears that endeared you to him? What would you say are the main differences between riding a mule and riding a horse – especially in endurance events?

Funny thing is I did not think Ears liked me at all – he seemed very indifferent, came from the race track where they get smacked around. Love to watch mules or horses racing, just beautiful, just wish they did not get the abuse or discarded if they don’t do well. Ok another story lol. It took time to bond, people say “oh they are stubborn”, I got the feeling they are more self preserving so if they have had enough they tell you. Now that I have both, I feel that what traits they have are more intensive than a horse. With Ears his focus is like none other … and when he hunts no stopping him, you can find that in a horse but they really like to be with horses so if one is nearby, hang on. 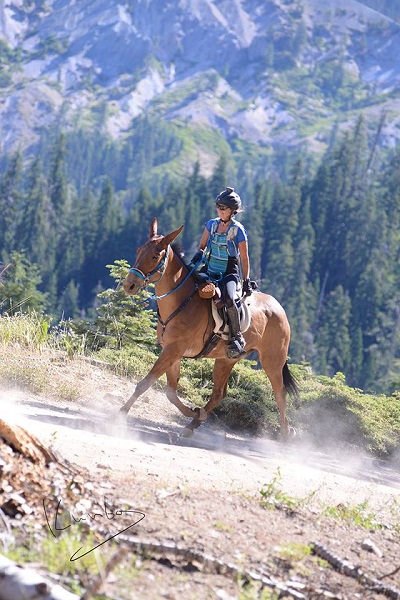 3. I saw some photos of you while the ride was in progress, and you looked great – was it all as effortless as you made it look? I know you have a funny story about Cougar Rock!

Yes it was we started in pen one, only 60 riders are allowed – those that place high in previous races that year. They go by % and below 60 I think we scored 24% … I was told not to start in that pen BUT let me tell you I would not have it any other way. Most of the fast competitive riders start there … my response, you are all on mini coopers and I am in a Suburban lol. 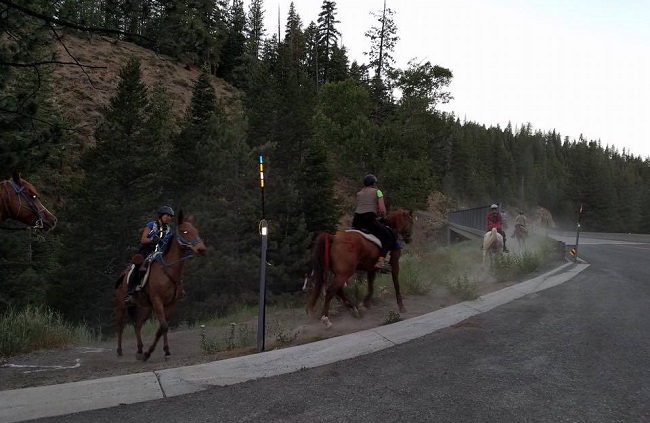 “Single track to start before you cross under hwy 89 up to Squaw.” 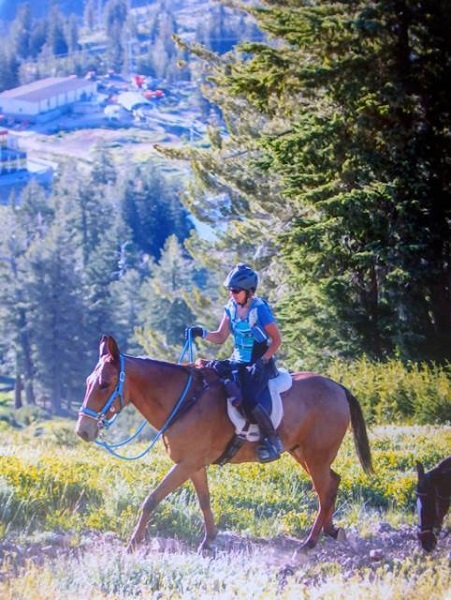 “Then we pretty much walked up Squaw since most horses get pulled at Red Star for metabolic.” 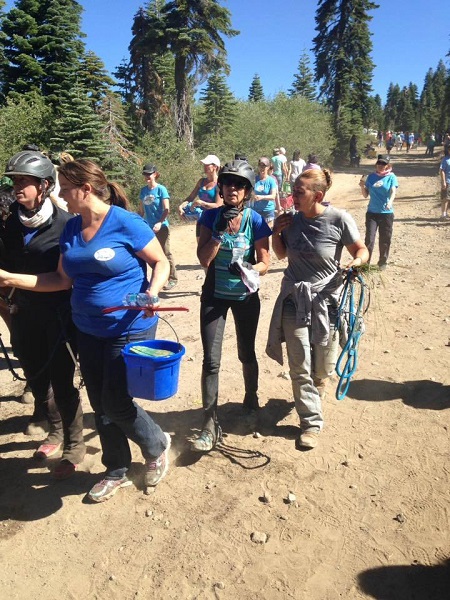 “Coming into our first Vet check with crew, Robinson Flat.” 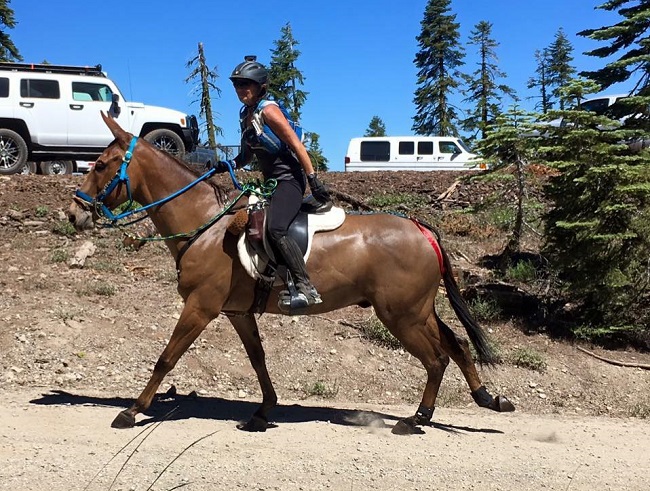 “Heading out of Robinson in about 23 place.”
Photo © Jessica Bishop

The idea for Cougar Rock is to follow the arrows and go around a big slab of granite … well Ears thought it would be quicker to just JUMP and that he did. I have to tell you I would not do this on my Arab, but I knew he was steady and when he puts his mind to something you could not be safer. His head says it all…. 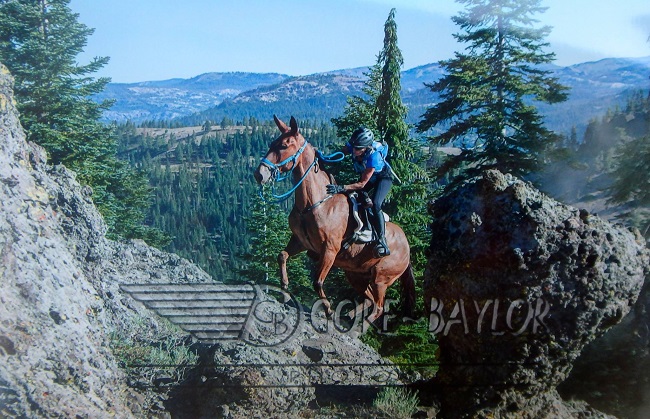 So headed into the worst part of the ride: 2 very hard canyons, Swinging Bridge and Devil’s Thumb, and headed down and up into Michigan Bluff in temps reaching 110. So if I was going to get pulled it would be Deadwood or Chicken Hawk, we just had to make it to Foresthill where I had my crew waiting for me. So my next oops moment was at Swinging Bridge. Ears opted not to take the bridge but go through the water, and they mentioned at ride meeting not to as there were no spotters. This is what the photographer had to say about those photos: “Some of the better water shots, but your river exit had my heart in my throat!” 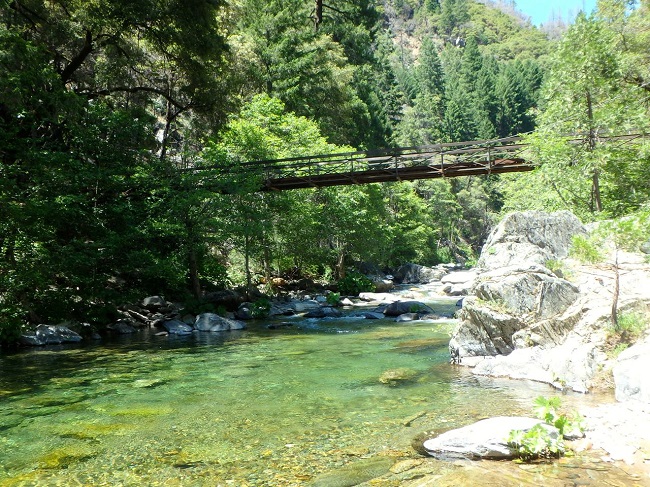 “So here is a picture of Swinging Bridge, not during the Tevis but one of my conditioning rides.” 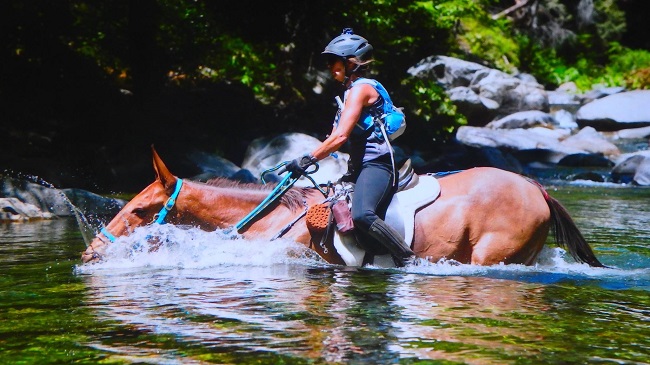 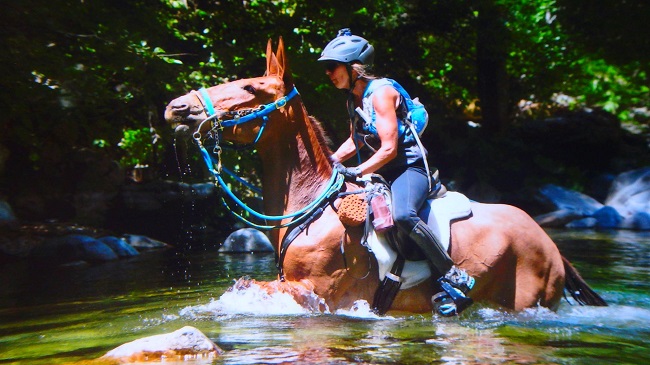 OH and MULES roll more than anything in the WORLD!

4. Is that how he celebrated his accomplishment? Can you describe your feelings as you crossed the finish line?

So surreal I really was thinking we did this, we really did this. Even though I knew that when I got on him in the morning he was going to make it – not once in the ride did I think we were not going to make it – I questioned myself as I had come off in the dark losing my stirrup, and took a bit to find and I banged my knee on a rock. BUT damn, that mule did not waver. Also I got lucky and came in with my friend who rescues Mustangs and trains them so the joke was a mule and a Mustang walk into a bar – well actually cross the line together. And once I got him home he JUMPED out of the trailer, called out to my Arab Tux, and they both were screaming and he ran up to the gate. I let him in, they chatted, and he went straight to his favorite roll spot! 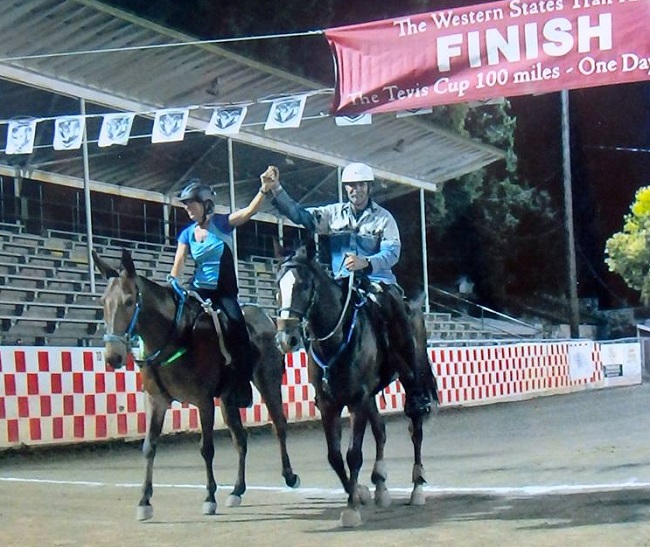 5. That’s fantastic! It must have been such an incredible feeling. What’s the most important thing you’ve learnt as a mule rider, and what piece of advice would you give to someone new to mules?

So I was brand spanking new to mules … give them the same respect you would a horse, they deserve the same treatment. I never go the stubborn side so I have been lucky I have tried to spend more time getting to know him and vice a versa. There is a big misunderstanding with them and some people actually ask you to move as their horse does not like the smell of mules  – hummmm my horse had no problem. I think the horses pick up on the human vibes. Oh, and trust him like never before – he knows best, someone said to me he will take care of me and take me to the finish. I thought ya right BUT I’ll be damned he did … give them their head and trust their judgment, 99% of the time they are right. 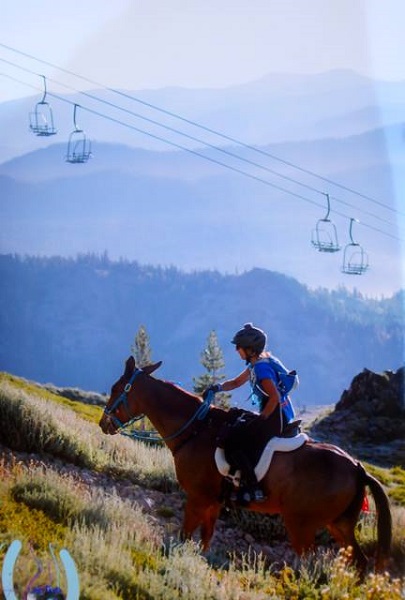 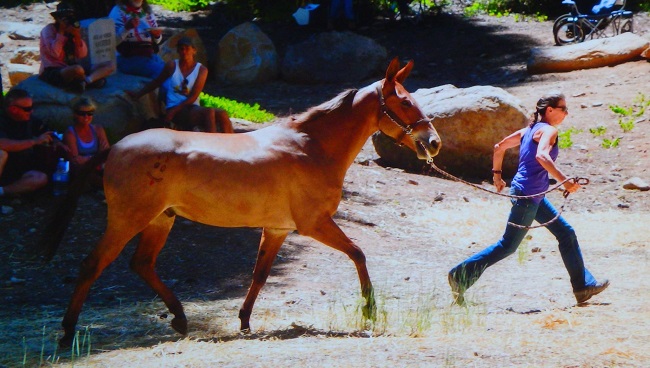