I completely forgot to write a blog post last week – I’ve been busy getting the June/July issue of the magazine ready for print, and as that’s pretty much my full time job now I tend to lose track of days. It wasn’t until we were halfway through Sunday that I realised my error.

Anyway, to appease you all, here’s a pretty awesome Mule Tale! We haven’t had one of these for a while, and this is a particularly cool one. Thank you to Natasha for sharing their story. You can find out more about this awesome pair on their Facebook page, New Moon’s Daredevil – Mooney. 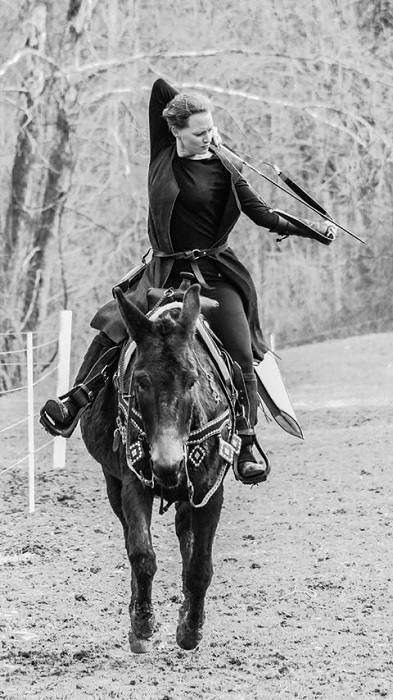 New Moon’s Daredevil (AKA Mooney) is an eight-year-old john mule. 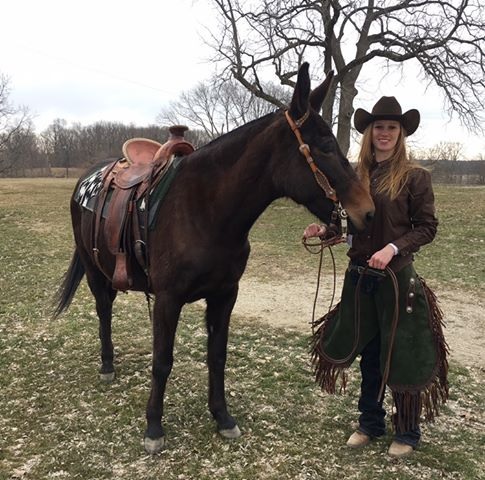 We met a year and a half ago. One of my good childhood friends bought him from a man who rode him on trails. He promised her that when he was too old to ride and could no longer do it, she had the first chance to buy him. Three years ago, she was able to purchase him.

I had never interacted with him, just seen him from afar on the hillside of his pasture. It was love at first sight, though. Once I laid eyes on him, I knew I had to have that long-eared wonder. After about a year of sitting in that same pasture, I was able to purchase Mooney and put him to use. From that moment, our incredible journey of mounted archery began. 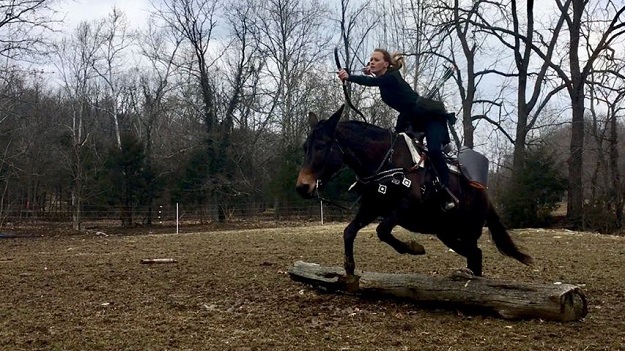 When I first got Mooney, he had forgotten almost everything. I had to put a lot of time and effort into getting him to neck rein, respond to leg cues, and even respect ground manners. We started our new career of mounted archery shortly after.

Mooney took to his new job like a champ and enjoys being my mount for archery. After just five months of training, we debuted our skills in a Wild West show produced by Melissa Ashcraft of Transitions Equestrian Center. We performed a mounted archery routine in front of 4,000 people. Though Mooney was nervous hearing the crowd roar, we built a stronger bond and worked through it.

Shortly after, we competed in two national competitions. We fared well against some tough competition, but also experienced new courses and learned a lot. Our bond not only grew stronger, but our own understanding of the sport grew as well.

Currently, Mooney and I perform various mounted archery routines ranging from thrown targets, gong targets, and even flaming arrows. We host beginner mounted archery clinics and hope to be able to spread the knowledge of the sport in a positive and safe manner. Our plans for the future include: start our own mounted archery chapter, improve on many of our skills, travel more nationally to put on performances and demonstrations, and hold many more beginner clinics to help introduce the sport to people. 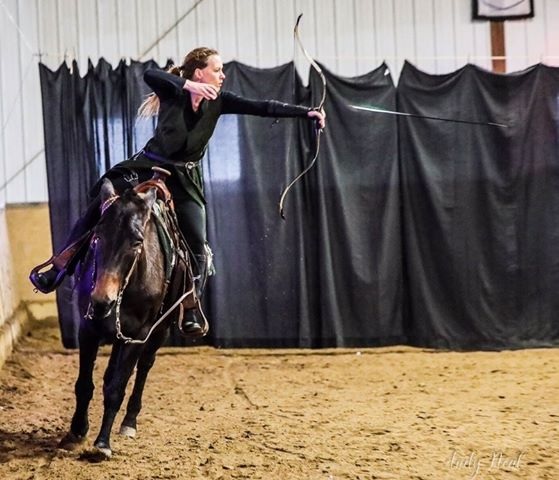 Mooney and I have a great connection. Introducing him to new things, like flaming arrows or thrown targets, proved to be surprisingly easy. After being in each other’s lives for almost two years, I am not sure if much of my crazy ideas surprise him anymore.

Though he can be apprehensive at first, he is quick to accept and learn. Some examples include various courses we have worked on: one time, we had a course where we had to shoot at a target while running down and around a barrel and back. Of course, it took reining him to turn him around that barrel, but he eventually realised what we were doing and I wouldn’t have to tell him at all. He would just do it exactly right.

Another feeling I love is his passion for the sport. When Mooney sees the targets and me holding bows and arrows, he knows exactly what is going on. At competitions or performances, he knows his job very well. Though he knows what he is supposed to do, he still respects me and waits for my cue. When we are lining up to go down a lane to shoot, we will walk up to it and you can feel him asking if it is time for him to pick up that canter and run down that lane for me. You can feel his energy as he is ready to go and all I have to do is twist my leg in the slightest to ask for that left lead and canter down the lane. It is moments like that where I feel the greatest connection with Mooney.

He is my partner, and we think the same and know what we expect of each other. With that connection, I believe it is the key to us being able to execute our routines and jobs in the greatest way possible. 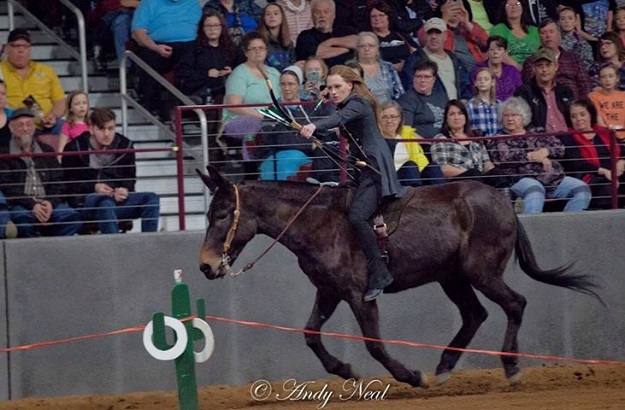 The most important thing I have learnt as a mule owner is patience and consistency. Mules are smart; so smart that if you change up anything in the slightest, they know. You change tack, you change saddle pads, anything, they know it. You give commands one day consistently and then the next you decide to ignore one thing, and they will use that to their advantage.

In the end, they look for that release and to be left alone. They don’t want you to be constantly pulling on the reins or kicking them in the sides. Once they figure out what you are asking with releasing the pressure and leaving them alone, they will pick up on the job very quickly and then you have to be consistent from there on out.

I  learned a lot from great horse trainers in the world, as well as watching videos on training from professionals in the field. They definitely help, but patience is key. You cannot rush things with a mule.