The mule has been his usual contrary self lately; we haven’t been doing much, but what we have done has been good or, at the very least, interesting.

I’m really proud of how well he handles situations these days. I remember a time when just trying to touch him with a rope would send him leaping skywards or running backwards! Now he’s matured and learnt that I’m not actually out to kill him, and things that would have bothered him in the past are no longer such a big deal.

For example, while doing some liberty work with him in the field, I was trying to get him to step his hindquarters away from me. I don’t think I was being clear enough in my request because he wouldn’t do it, and kept walking backwards instead. I could see him getting frustrated, and in the past he would have said “Sod this!” and just left. But this time he didn’t. He was under no obligation to stay with me – I had no rope or halter on him – but he kept trying to figure out what I was asking him to do and he made no attempt to leave.

This is what leaving looks like. I’m pleased to say I’m seeing it less and less. 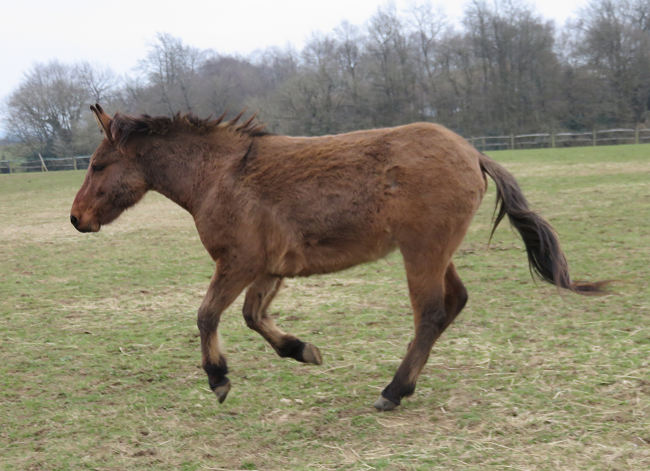 On Saturday he walked up to be haltered as usual, but just as I was about to tie the knot he threw his head in the air and rushed out backwards. This is what he used to do, and my heart sank a little. I had been enjoying having a catchable mule and didn’t want to go through all this again. However, whereas before he would have stormed off and grumped and not let me catch him again, this time he stopped as soon as the crownpiece fell free. The noseband was still around his muzzle, I was still holding the rope, and he stood and wobbled his top lip until the halter dropped off. Then he came up to me to be haltered again.

We had a lovely session on Saturday; he had his saddle on again, and we just worked on leading and basic groundwork while he wore it. Afterwards Ben took Iris into the arena and asked me to film while he rode. The arena is visible from the field and, whenever I glanced over, I could see the mule standing at the gate: his gaze fixed firmly on me. It was definitely me he was watching, not Iris, as his eyes and ears never deviated from where I stood. Now obviously this gave me the warm ‘n’ fuzzies, and when Ben asked to see what I’d recorded so far, I took the opportunity to nip over and fuss my lovely mulo.

His ears pricked up even further as he saw me approach and he whiffled his nostrils. My heart did a little flip out of love for him. I ducked under the fence to say hello, and after a cursory greeting he turned and asked for butt scratchies. I’d barely started when he suddenly sat right down on his hocks, scooted forward, and stomped off in a patented Marty sulk. Oh, I thought. That hadn’t been what I was expecting. 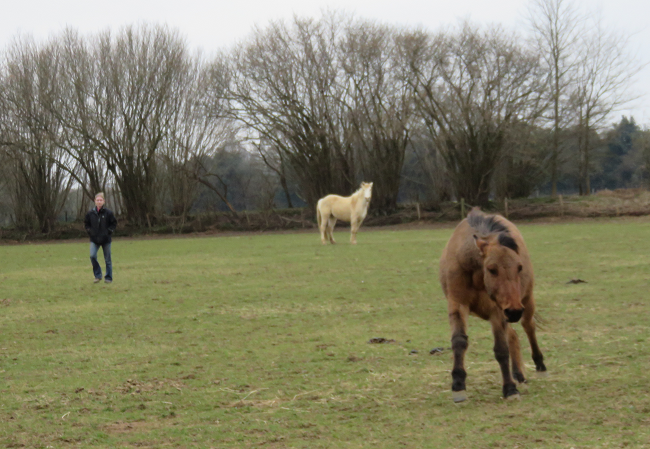 I assumed he would walk in a circle and come back to me – his usual pattern for when he’s taken offence to something – but he didn’t. He just walked away. I tried to approach him, and he started chunkering around (his ‘angry fat man’ run, with his nose in the air). I eventually got him to come to me and was allowed to stroke his shoulder, but then I pushed my luck and tried to give him back scratchies … so off he went again. In the end I gave up and went back to film Ben, but he was still furious when I returned later! He kept chunkering up and down the field, swinging his head and deliberately running past all the horses so that he could pull nasty faces at them. All I wanted to do was stroke his shoulder but he was having none of it. I just had to leave him to it in the end. 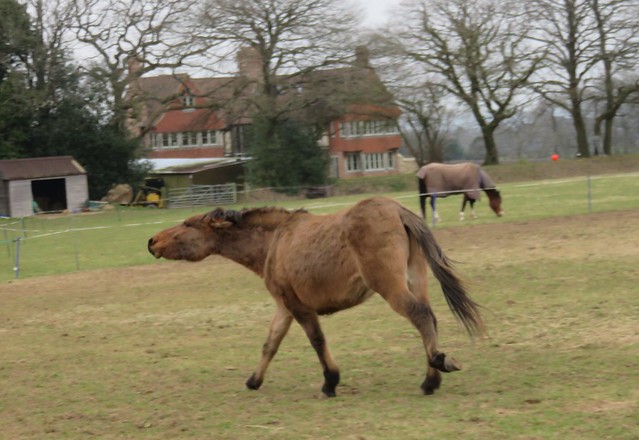 The next day he walked up to me and had neck scratchies, on Monday he did the same, and this morning he wanted butt scratchies again. So I have no idea what the problem was! I did wonder if I’d made him jealous by hanging out with Ben and Iris and ignoring him, and his circuitous chunkering was him punishing us … mules can be such high maintenance sometimes.

On Tuesday I had a really lovely walk round the property with him. He was so good! The terrain is quite varied, but he walked where I led him without hesitation – even when what I thought was just a muddy patch turned out to be a slimy, slippery layer of slurry. Yuck. At one point we were walking alongside a thick screen of trees when, from the other side, we suddenly heard some frenzied whinnying and the thunder of hooves. I’d forgotten that there are horses in that field, but mule just flicked an ear in their direction and kept on walking. 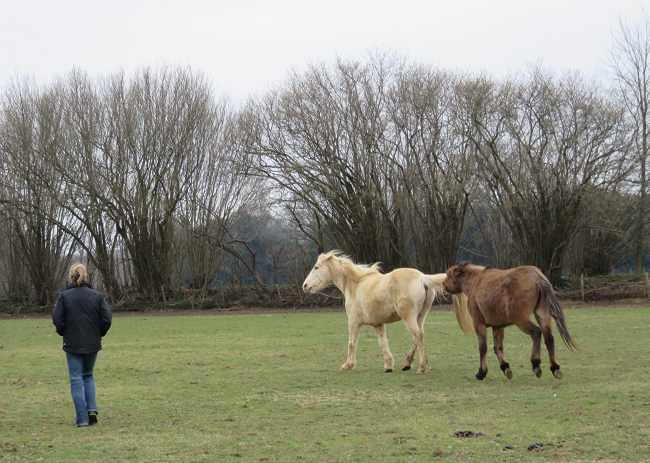 But the best part of the past week is that he asked me to scratch his poll. This is a big deal. He does not like his ears being touched, although I am now able to scratch the base and – occasionally – the insides, and his poll is a no go area. He tolerates it only to have his halter put on. I’d been hanging out in the field with him, scratching his back and his neck, and then he reversed a few steps so that I could only reach his head unless I moved too. I tried various scratchy spots to see where he wanted; in particular, the top of his neck just before the poll which has become a surprising favourite recently. But I got no stretchy-lipped response from him that would have told me I’d hit the spot. Then he lowered his head and bent his ear so that his poll was revealed. 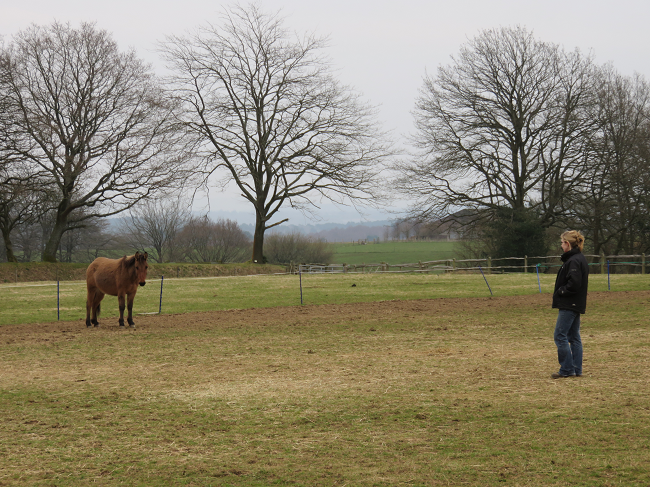 “Do you really want me to scratch you there?” I asked him. He bent his ear further. So I did as I was told, and he closed his eyes and lifted his head a little and pressed his cheek against mine and just stood there in absolute bliss.

I realise that it’s maybe weird to be so elated about scratching the back of my mule’s head, when for most people elation comes because they’ve taught their horse canter pirouette or got them to jump that scary oxer or won an important class. But I’m content to be weird. And I think my mule is, too. 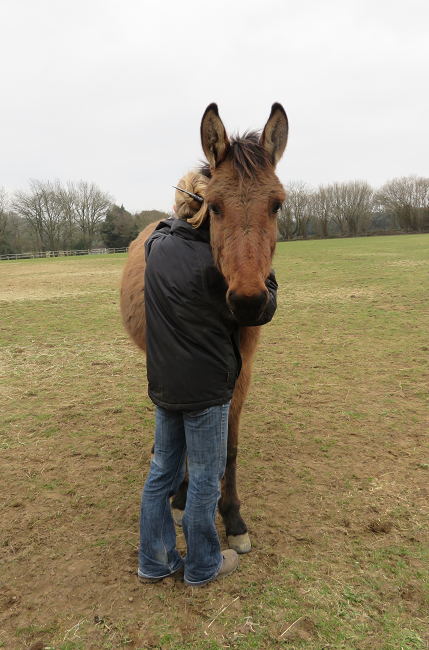