A few years ago, when we lived in Surrey, I was leading Marty out on a walk through the village. A lady stopped to talk to us about what we were doing and whether he was broken to ride. As we parted, she asked how old he was.

This seemed like an odd thing to say. Hurry up? Why? What was the rush? This mule could easily live another thirty years. Even if he hadn’t come with his own special brand of Martyness, at five years old he still hadn’t finished growing. All young mammals, including us, have growth plates; areas of growing tissue which allow the animal to grow and mature, replacing cartilage with bone in a process called endochondral ossification. In equines, this skeletal development takes place from the feet up, finally culminating in the spine at roughly six or seven years of age.

Even so, I felt silly and ashamed over the comment. At the time I consoled myself by thinking that I still had plenty of time to get on him before he reached a truly unacceptable age, and would have been horrified if I’d known that I wouldn’t get on him until he was nine.

More recently, I saw a discussion online where someone had asked for training tips for starting a three year old. Amongst the many replies was a lady who commented with a recommendation for groundwork, and shared a photo of her own four-year-old cob who she said wouldn’t be started until the mare was both physically and mentally mature. A Random Bloke™ decided to tell her that – based on his assessment of this one photo – the mare looked plenty mature enough to be ridden, and he also left his own comment to tell the OP that she must get on the three year old now because if she waited another 18 months “the pony will be too strong to break as he will be five years old by then!”

The thing is, it’s not the first time I’ve stumbled across this belief that equines suddenly Hulk out and become unmanageable for all eternity if they haven’t been sat on by the time they’re three or four years old. A lot of people believe that it’s impossible to do anything with them as they get older, and I assume that’s what my “You’d better hurry up!” friend was getting at.

I think the reason why people believe this is because the traditional approach is to do nothing anything with the horse until it’s time to start riding it. It’s very common to see yearlings and two year olds left mostly to their own devices, only to be hauled in from the field at three years of age and immediately faced with a bewildering array of new rules and new expectations. Horses, being more flight than fight, can generally be relied on to give in to these demands fairly quickly – not so with mules, which may be one of the reasons you see so many mules for sale in the UK who have no handling whatsoever. Having been left unhandled for the first few months or years of their life, they are then expected to just fall into line with whatever the owner’s plans are and mules, of course, are notoriously good at voicing their objections to sudden changes in routine. This approach rarely works and so the mule remains unhandled, or picks up trauma from bad (i.e. forced) handling, and is passed from pillar to post becoming even more difficult to handle with each change of owner.

I’m not saying that young equines shouldn’t be allowed to be young equines, but imagine how much easier that transition to a working career would be – for both the human and the equine – if they already knew about leading up nicely, about traffic, about having things on their back or touching them in unexpected places. Good groundwork becomes good riding, so if you already have it on the ground then you’re ahead of the game when it comes to starting them under saddle.

I have also seen the argument about a young horse needing to carry weight at a young age in order to help the bones adapt to carrying a rider (citing Wolff’s Law and various studies done on racehorses), but I have my reservations about the validity of this. I suspect that a gradual increase of stresses may be beneficial, but with a young horse whose bones are still forming you would want to be very sure that you weren’t introducing loads that broke the bone down quicker than it could repair itself (equally, if you were to get on a mature horse who had never been more than a pasture pet and expect it to perform high-stress work without gradual conditioning, then they would likely break down very quickly as well). Proponents of Wolff’s Law are also overlooking the fact that horses are more than just bones, and that the ‘Law’ was written before we knew about osteoblasts (cells that form new bone).

At the time of the “hurry up” comment, I wasn’t fully aware of the growth plate process and my main reason for not riding Marty yet was because I would probably get killed. Ha! In all seriousness, mental maturity is overlooked even more than physical maturity when it comes to starting equines. There isn’t a specific age when they suddenly decide to get down to business – you can have a level-headed three year old or one, like Marty, who doesn’t mellow out until they’re nine (and male mules are notorious for being very slow to mature mentally. Some people say a male mule doesn’t get his brain in gear until he’s ten!).

Anyway, this is all a very long-winded way of me saying that I used to feel embarrassed for not having jumped on my mule years ago, gung ho and thankful for our NHS being able to patch me up free of charge should I meet my inevitable doom, but these days it is much less of an issue. I am still beholden to other people’s opinions enough that I worry about posting this opinion piece, afraid of attracting keyboard warriors, but then I remember that this blog is very small and nobody cares about my waffle. So that’s fine.

I got on Marty properly for the first time in July which was a momentous occasion, considering that I once thought he would never be safe enough to carry a rider. I don’t know how many times I’ve been on his back since then as I haven’t kept count, but it’s been a deliberately slow progress. I don’t have any riding gear for him as I chose to get a pack saddle earlier this year instead, and honestly packing is where my interest lies right now. This is helpful in itself: teaching him to pack first meant that he has picked up a lot of skills necessary for being a good riding mule, and the switch-over from slinging a pack saddle onto his back to slinging myself up there instead was just another day at the office for him.

It’s been a long road getting here with behaviourists, veterinary experts, bodyworkers, a week of training for me with Harry Whitney in the US, and a month spent with Anna, Harry’s apprentice in the UK, to help us on our way. I have been given various advice, some helpful, some not; and I’m sure there have been many people who’ve thought “I could have done that much quicker”. Maybe you’re even thinking it now. And honestly, if I’d had the time and energy to devote to him that I’ve had since moving to Wales, and if we’d sent him to Anna and kickstarted that phenomenal change in him sooner, then maybe we would be further along by now.

There’s a lot of variables in this hypothesis, though. My gut feeling is that it takes the time it takes. There might be people who think they could have got it done quicker, but I believe that Marty would disagree with them on that. 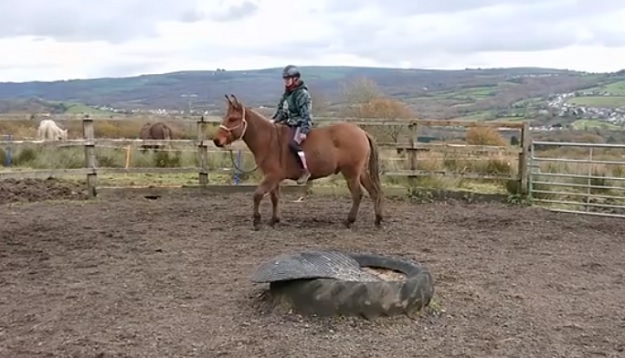