I want to preface this by explaining that this is a decision I have spent the past year deliberating on. It occurred to me, after making the announcement earlier this week on my personal Facebook page, that only a handful of people knew I’d been thinking about this and only one of them – my fiance, Ben – knew exactly how long I’ve spent agonising over it. Therefore, it would be easy to assume that this was a snap decision. This is not the case.

I have often been thanked for my honesty in this blog, but the truth is that I have withheld a rather large issue from you: despite my attempts to rationalise the bad days and come up with feel-good summaries and inspirational mottos, I have not enjoyed owning my mule for quite some time.

As the article heading might suggest, I have decided to bring my partnership with Marty to an end.

This has been a long time coming. As I say, I’ve been thinking about it for some time, going through all possible options in my head, and if I’m honest I think I’d finally made my decision before I even sent him to Anna’s. By that point, it was mostly just an effort to install life skills in order to give him the best possible future.

And he has made changes – he’s made huge changes. I am so proud of him and so thankful to Anna for the incredible amount of work she’s put into this. Anna is completely, utterly, 100% in it for the horse (or mule!) and I can not recommend her enough. I chose to send Marty to her because I believe she is the best in the country and I still believe this. The week I spent down in Devon, watching Anna work Marty and even being allowed to sit in on some of her lessons (thank you so much to the clients who gave permission for this – I know how nerve-wracking it can be to have a stranger watching!), were a real privilege. My decision to rehome Marty is not a reflection on Anna.

That last point is very important: I know some well-meaning people may try and suggest that I send Marty to x, y or z instead, and although I appreciate the thought, I do not think anyone else would have been able to do more than Anna did. 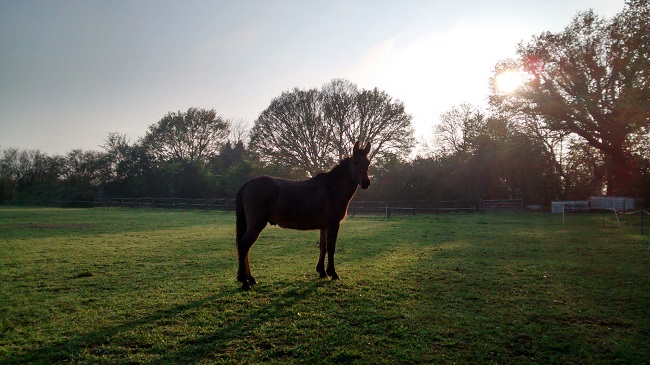 During his first week of being with us.

I feel greatly overwhelmed by Marty. Of course we’ve had awesome days, and he has taught me so much, but it’s begun to feel like the bad days outnumber the good. For the past year or so, I would get a sick, knotty feeling in my stomach every day; anxiety because I knew I would have to handle my mule, or guilt because I knew I wasn’t going to. After I returned from Devon, I realised that I didn’t miss him. It felt weird not to see him twice or even thrice a day, or to hear him call to me on the rare occasion I passed the field without dropping in, but I didn’t miss him. I just felt relief.

I’m pretty sure that’s not how mule ownership is supposed to feel.

I was also resolutely, unequivocally sure that I could not face those emotions again. I simply do not have the energy left to do it.

I could continue with Marty’s education myself. I could just keep on keeping on, chipping away at his shell bit by bit, doggedly working away for another two, five, ten years. I could work myself into the ground in order to afford further training. Anna did not write him off as a riding mule; he carries a lot of worry, and has a great deal of flight, and anyone who rode him would need to support him every step of the way. But it could happen.

I could keep him, even though that would mean I would never be able to have another. We do not have the land and I do not have the money. I could say that, if he didn’t become the things I’d hoped he would be, then it wouldn’t matter and I would just keep him as a companion – never mind that we already have one pasture pet. 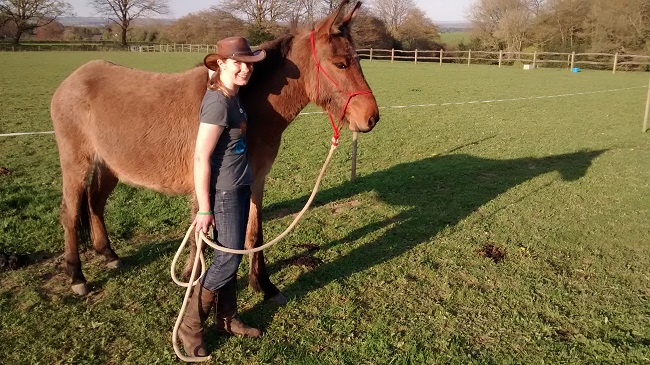 The answer, rightly or wrongly, is no.

I realise this may cause friction with some of my readers. I thoroughly understand that. I have never sold or given up on an animal before. An earlier incarnation of me would have spouted furious words about how an animal is for life, and not just to be thrown away when they fail to make the grade. Wiser me realises that there are exceptions and that not everything is black and white. Older me knows that life is really, really short.

I have spent thousands of pounds – money that was my savings, by the way, I am not a high-earner – on ruling out physical problems and on giving him professional training. I have given thousands of hours of my time and energy into caring for him, handling him, and trying to help him. I do not think I could have done more. I know I do not have any more left in me.

I have learnt a lot in the two years and three months that I have owned Marty. For example: despite stepping in at the deep end (and getting water up my nose and chlorine in my eyes in the process), I have realised that I really, really, really like mules. I also really like mule folk, who are among the nicest, friendliest people in the world. I have not come away from this thinking that mules are a terrible idea.

Marty’s path is about to separate from mine, but I will still be here when the sun rises, following mule prints just as far as they’ll take me.

9 thoughts on “Marty and the final chapter”