Sometimes, I think Marty is a lot like Sherlock Holmes: brilliant, disinterested in the mundane, easily bored and only ever a hair’s breadth from being the greatest criminal mastermind of all time.

I like Sherlock Holmes (a lot … you can add that alongside mules when it comes to subjects to never engage me on), so this similarity meets with my approval even when it’s maddeningly frustrating. I am, quite literally, the Watson struggling to understand my friend’s genius and write about our adventures as best I can. Like Watson, I probably come off as a bumbling fool in comparison. Unlike Watson, this is entirely accurate in my case: I am a bumbling fool. But I’m trying as hard as I can.

He has got a pretty nice trot, though. 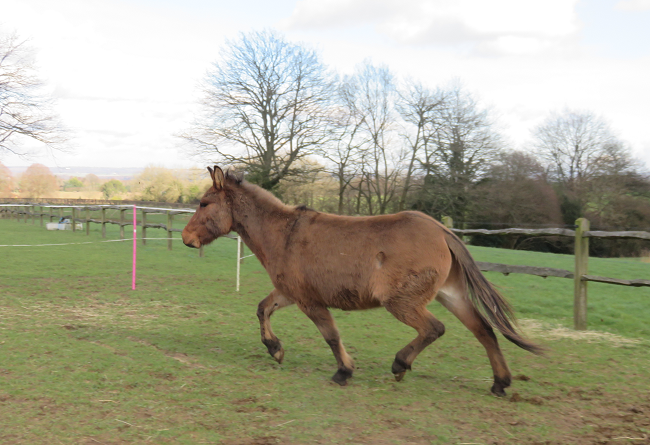 You’ll remember his mule pen: how he carefully checked it out as I built it, and how we didn’t actually need to use it at all until last Saturday. I had hoped, now that he knew it was there and that it put a dent in his diabolical plans, that I would see a change in him when it came to catching. Unfortunately, that change involved getting even smarter about evasion.

Today, I arrived at the yard to find Marty all alone at the top of the field while the horses grazed by the bottom fenceline. As I’ve mentioned before, this is usually a bad sign, but the weather was perfect so I figured I still had a good chance of him being amenable.

He saw me arrive and came hurrying down the field to me, ears pricked, expression cheerful. And then when I began to put his halter on he whipped around sideways and ran off to bully the horses, who very sensibly got out of his way and maneuvered themselves behind me. He’s bullied them one too many times and they’ve got wise to his plans.

Look at the ridiculous swagger on this mule. None of his feet are even touching the floor here! 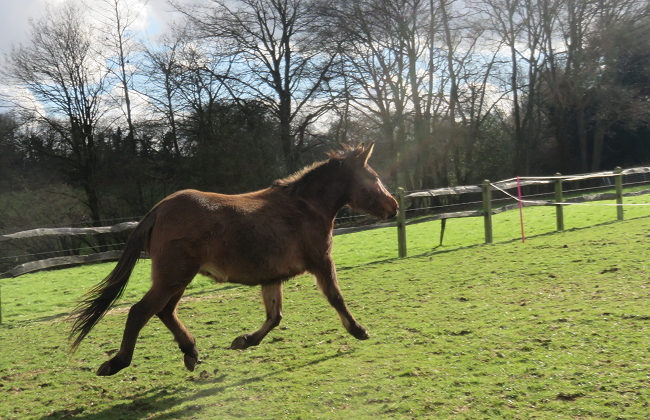 No problem, I thought, I’ll just send him round to his pen and we can work on this there. So off he’d trot, nose in the air, his swagger on point. And then half-way to the pen he’d stop, turn to face me, and wait patiently. I approached him – and he waited until I was just close enough so that I couldn’t block his exit back up the field, and then away he’d go. He did this to me twice until I realised what he was doing (the mule is most definitely smarter than the handler) and I found the point where I was close enough to send him forward but not so close that he could get past me and go in the opposite direction.

Once in the pen it took me a little while to get him to stop looking for answers out there and start looking to me instead. In the end the whole thing took 50 minutes, which is the longest it’s taken me for several months. He was very determined today. I haltered him, walked him a few steps, then released him. He walked away and put himself in the furthest corner, but I recognised this as a need for thinking space so I sat on the ground and practiced mindfulness until he came back to stand with me. From there I haltered him a further three times in a row and then ended the session (mostly because I had to get back to work…).

He’s walking sideways here. Hey, we can do lateral work! 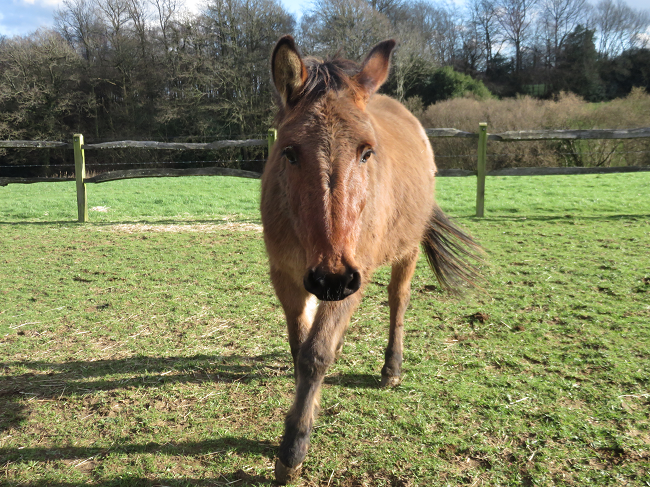 When I came back that evening, he was sweet, friendly, and not at all like the feral, “Don’t touch me I might die” animal I’d been dealing with earlier. He followed me around as I put out hay piles, even though he wasn’t actually interested in the hay, shyly asked for his itchy spots to be scratched, and then stood for a while with his chin on my shoulder.

I’m always impressed by how quickly he figures things out and the plans he comes up with, although it seems to me that he often makes things harder than they need to be. Perhaps he feels a strong need to eliminate all other possible actions first; after all, whatever remains – however improbable – must be the truth…

This would be the “Oh, alright, I guess your way is easier…” look. 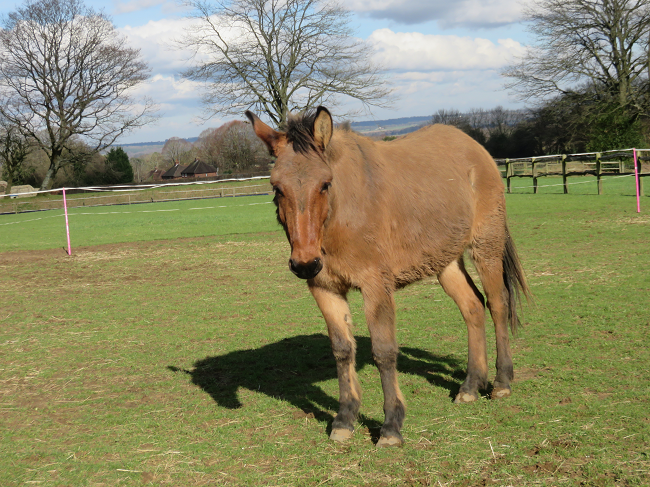