On our second day in Mallorca, we made another evening visit to Xato and Tally and this time I was dressed to ride.

I took Xato out for a short walk in hand first, and was thrilled to see how adventurous he was. He had no qualms about leaving his buddy in order to go exploring, and I loved how easily he traversed the smooth rocks and the low branches. 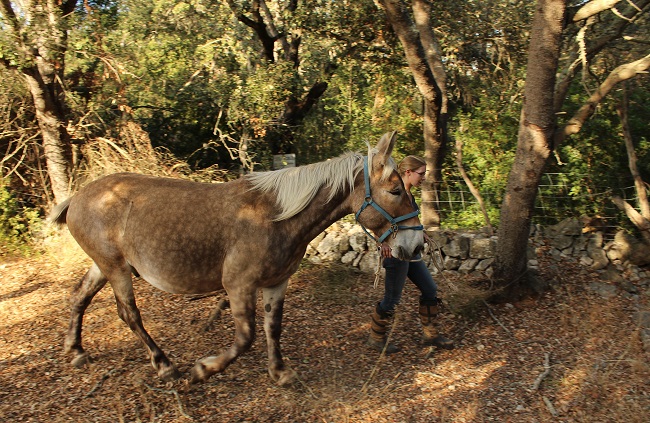 Xanthe also brought out the tarpaulin and I was able to have a go at leading him over it. It was no problem to him at all; he walked over it in both directions, stopped on it, backed up from it … he was an exceedingly good mule. 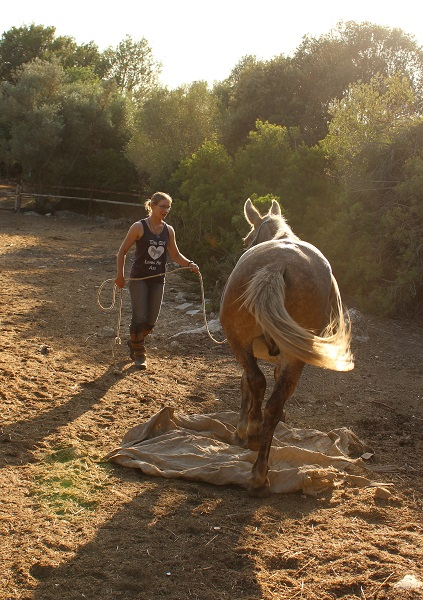 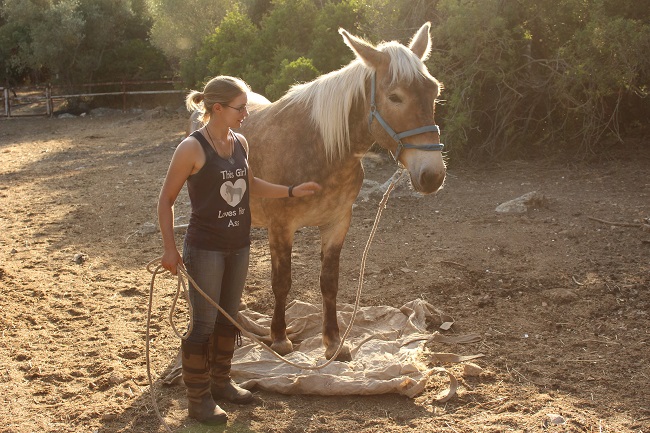 Then it was time to get on board (once a rogue stirrup leather jamming the tack room door had been well and truly defeated)! Xato has an interesting mouth in that his tongue is very thick and fills up most of the space in there, which makes bitting him quite difficult. Xanthe had wanted to take him bitless but found that when that big old head wants to go down to graze, there’s not a lot that can be done about it! She had put an immense amount of time and effort into sourcing him a bit which he could comfortably carry, and so I rode him with two pairs of reins – one pair on his headcollar, to act as a sidepull, and one pair on the bit. I started out using the sidepull reins only but ended up having to use the bit; but I’m hopeful that we can transition him to bitless eventually, and it will be a lot of fun working on that from the ground over winter. I’m not against bits but I feel like it would be best for him to go without if we can. No harm in trying! 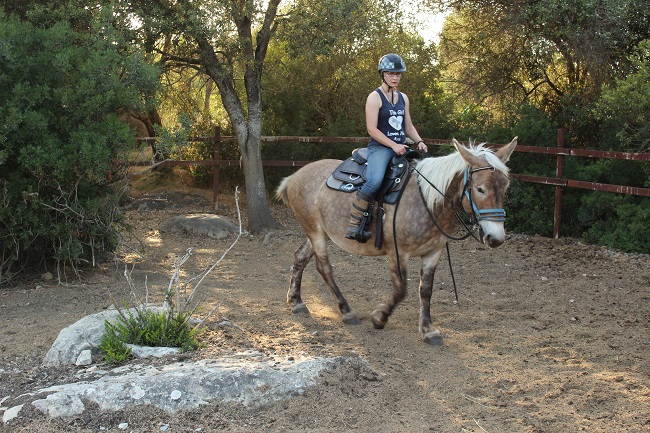 Our first few steps under saddle nearly ended with me being dislodged by a low branch, but luckily I was alert for once and steered him away as soon as he made his intention clear. He didn’t try it again, despite the fact that we passed a lot of trees during our ride. As I say, there’s nothing malicious about his nature, it was purely experimental. I admire that! It’s one of the things I like about mules. 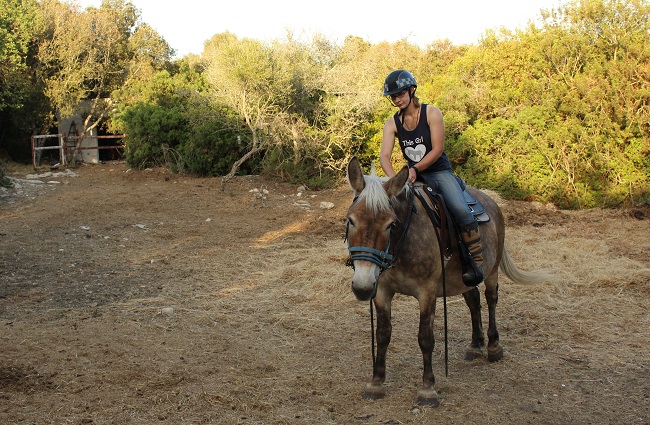 Then there was a bit of an oops moment as I rode him along the bottom of the pen. He took fright at an unexpected spluttering noise from the water tank, spun and launched himself like a barrel racer back towards Tally, who was tied in the field shelter at the far side of the pen (or, I suspect, towards Xanthe). Foolishly, I had not been expecting such a powerful turn of speed from him – it was very much a nought to sixty moment – and although I pulled him up within a few strides, it shook my confidence a bit and I was embarrassed and angry with myself for feeling that way. I really, really didn’t want Xanthe to think I was totally incompetent – I didn’t want Xato to think it, either! 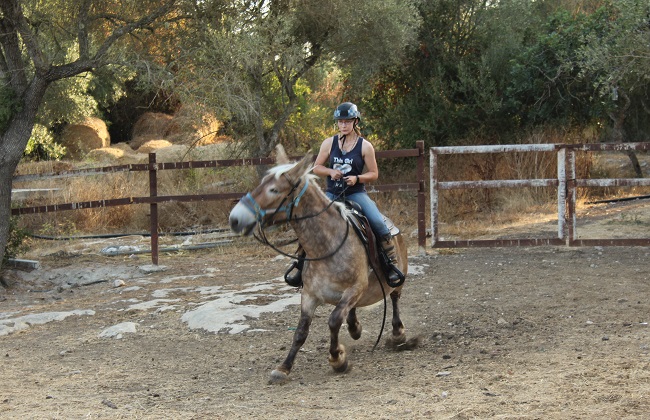 We sat for a few moments while I gathered my nerves (Xato just chilled out. As far as he was concerned, that thing was in the past and it hadn’t been important after all – so why waste energy worrying about it?). A few more circuits of the pen followed, and then Xanthe opened the gate and we stepped out into the world. 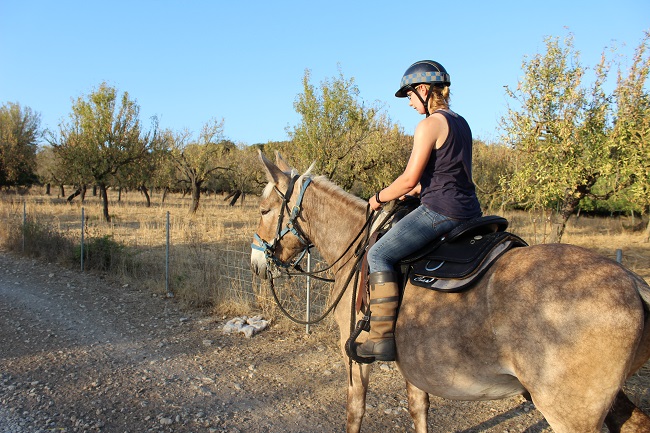 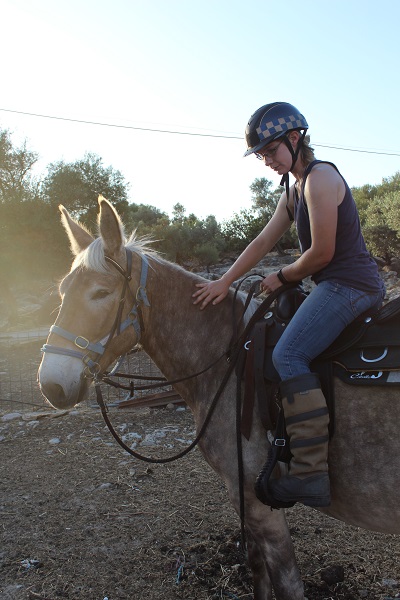 “What’s she worrying about?”

He walked out just as easily as he had when I’d led him (although the in-hand walk had been through a different gateway, in a different direction). Halfway up the track we were met by a posse of enthusiastic dogs, which Xato did not respond to at all; this was good for me to experience, because as you know dogs have become my personal bugbear as much as they’ve become Marty’s! Unfortunately, my nerves got the better of me later on when the trail began to wind its way up a rocky hillside, and I decided to turn for home instead. I cringe to look at the photos of us riding out, because I have a bit of a death grip on the reins – even in the parts where I thought I was relaxing and softening my hands! Poor Xato, he did unbelievably well to put up with that. 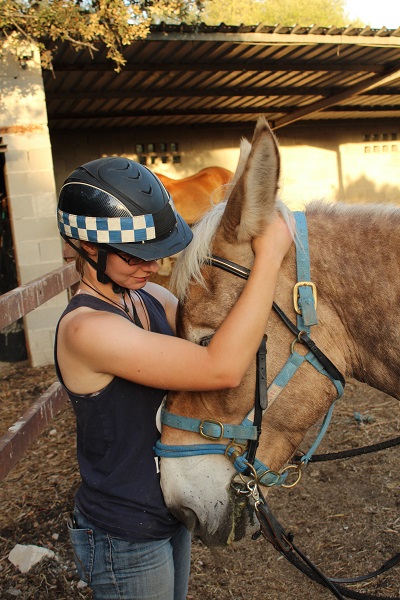 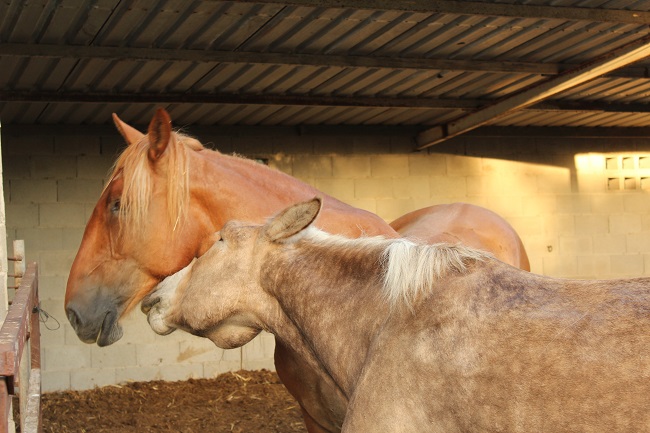 Later, when the adrenaline had passed and I had a moment to think about it logically, I realised a few important things.

Apart from a short ride around the pen with Xanthe a few days before we arrived, Xato had not been ridden for 18 months. One sudden “Ohmygosh!” moment was really not a big deal in that context, and most importantly of all, he had come down from it again almost immediately. Unlike a certain brown mule of my acquaintance, Xato did not feel like the type who would keep fretting away until everything meant certain death to him.

He had been bold and cheerful about leaving the pen and had not once tried to take control of the direction or speed.

Xanthe has been his person for his entire life, and so he did not find the same level of security from me as he would have from her. I strongly suspect that had Xanthe been on board, he would not have taken fright. That level of partnership with a mule comes with time and patience, and it is something I am more than willing to work towards. The only problem was me and my nerves, and as I’ve said before, that is something I am actively working to improve.

Xato is already on a totally different level than Marty and I really liked what I saw. I could definitely see us becoming a good team!

The following day we had Xato vetted. He had sustained a field injury as a four-year-old and although he has been sound ever since, I thought it prudent to get him xrayed so that we could compare it with the original, and find out whether or not he would be suitable for the long distance riding I intend to do with him.

We had previously practiced by ‘x-raying’ his leg using a box and a sheet of paper, which he thought was a bit odd but humoured us all the same. 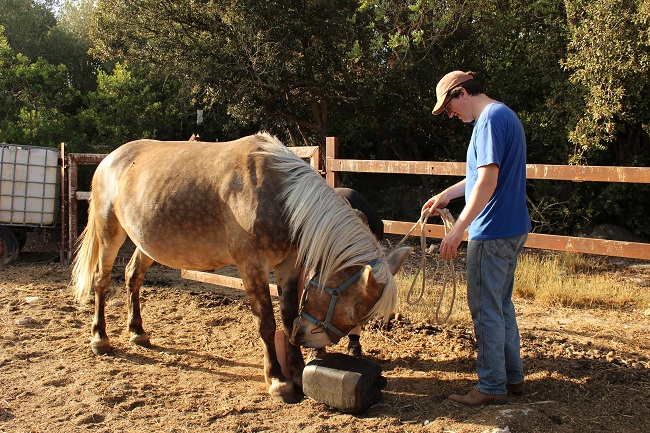 Xanthe had found us a vet who spoke English, and she was extremely lovely – she didn’t even mind when Xato thought she needed testing too, and pretended he didn’t know how to stand still despite having been so good about it the day before. He wasn’t silly about it, he would just put one foot out of place … and then put it back when asked … and then put it out of place again … and so on. He thought it was a great joke! 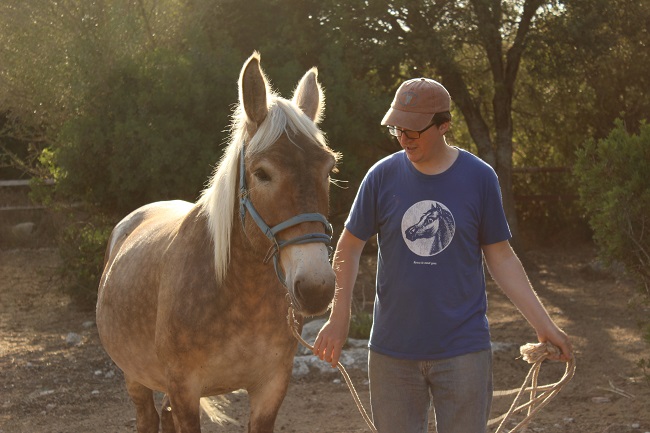 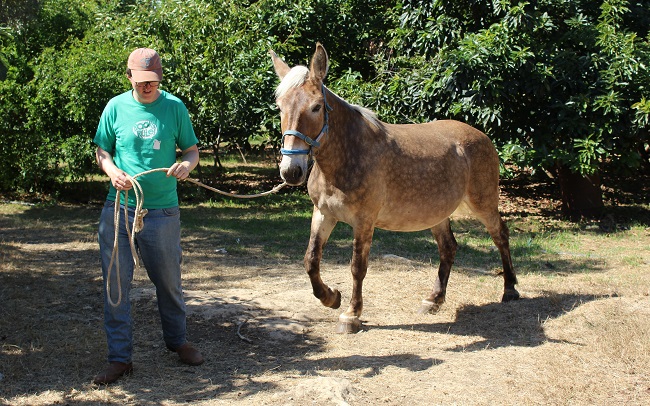 I asked Ben to do the trotting up, not because I am a mean person, but because I thought Ben would be more effective. Xato didn’t really see why he had to trot, and who can blame him? It was hot! 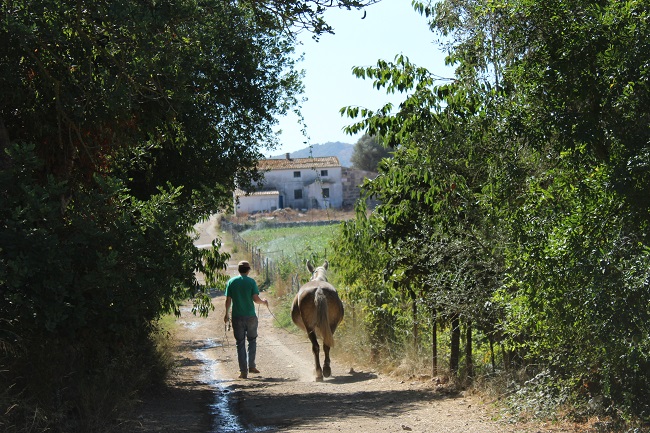 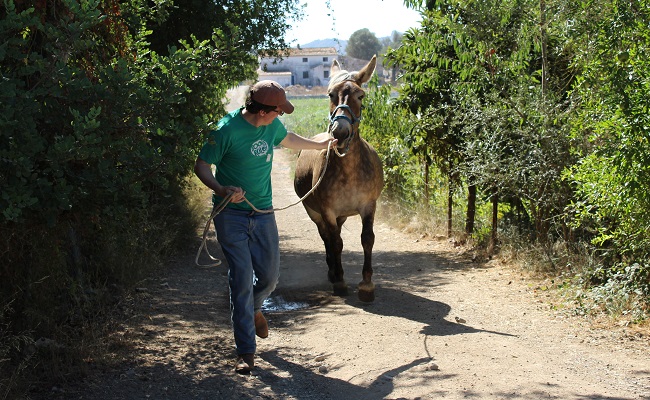 “Excuse me, hooman, I don’t think you quite grasp the situation here.” 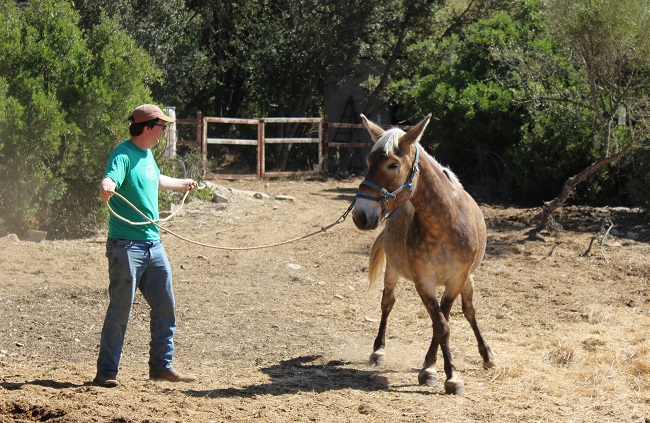 Xato hadn’t really been asked to move out on a circle before, so was a little confused when Ben asked him to… 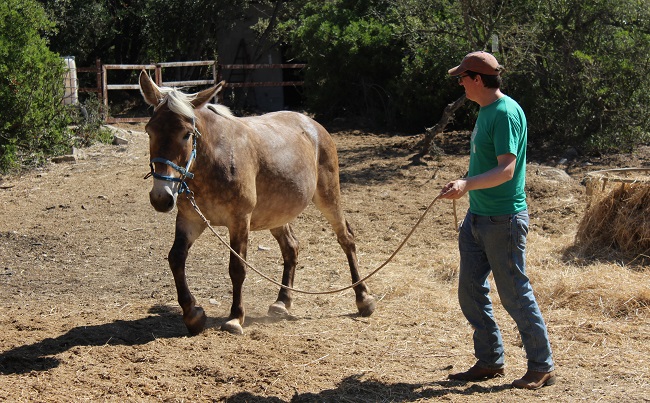 …but he figured it out!

Anyway, I’m pleased to say (and you probably already guessed) that he passed the vetting with flying colours. Now all we need to do is arrange his transport and accommodation as he makes his way across Europe later in the year … and that will be a whole different story! 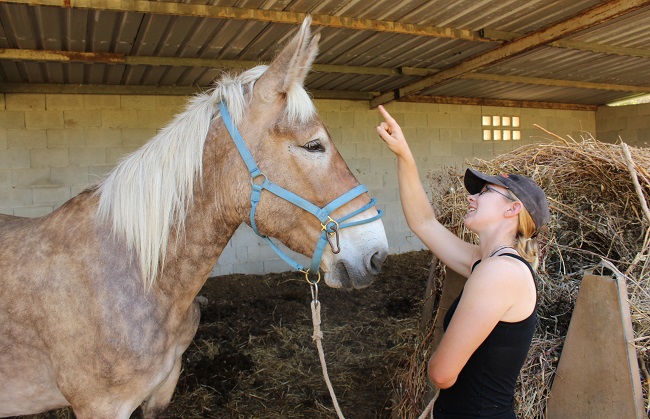 Apparently I am surprised to realise that he is, in fact, a mule. 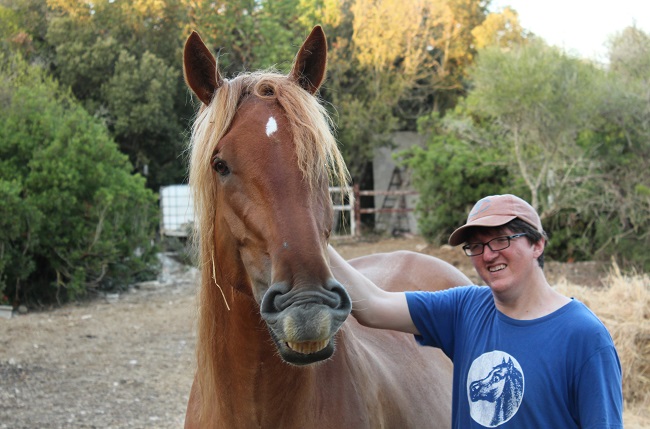 Some love for Tally. 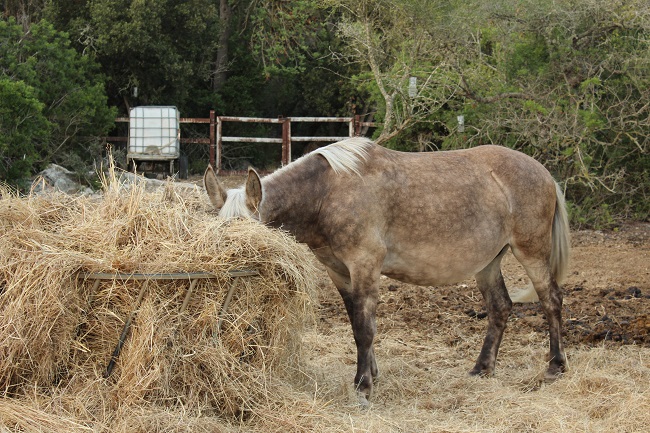 “I am going to the Mule Zone. Do not disturb.”