Well, the mule’s catchability did not last the week. The last two times I caught him, Iris had already been taken out of the field; and as he was reluctant even then, I thought I might encounter some issues when it came to catching him first.

Kate Sandel had suggested that I try using Karen Musson‘s technique of working with a horse at liberty. Kate had successfully used it with a very anxious horse, and although Marty isn’t anxious in the field (try grumpy/resentful/angry) he is extremely sensitive to pressure and body language so I thought this was definitely well worth a try. For example, a technique I use to catch a difficult horse is to put the pressure on when they’re leaving or ignoring me, and to back away and become quiet when they come towards me. With the mule, I quickly learned that too much pressure (helicoptering the rope, slapping my thigh, putting too much energy into my walk) was not the way forward as it just bothered him so much he wouldn’t approach me at all. So instead, I keep my walk soft and quiet, and although I spin the end of the lead rope I keep it low and don’t make a huge fuss with it – it’s more of an irritation than actual pressure. This was very successful for some time.

But of course, being a mule, he is ridiculously smart and he began to realise that he could use the horses as shields. I couldn’t direct energy towards him while he was hiding behind them, because that would just make them move off and give him an excuse to go with them. Luckily for me, our horses are quite smart too and they soon learned that if they stayed out of it then the mule could do all the running around and they could just watch.

However, Marty and Iris have been developing a fairly serious bond over the past few weeks. I’m sure his new-found love for her is at least part of the reason for his sudden herdbound behaviour. Up until now, it looked like the mule thought more of the mare than she did of him; they’d hang out together, even share food, but it didn’t seem like she was particularly attached to him.

I took this photo yesterday morning, and thought it was cute. Ha. 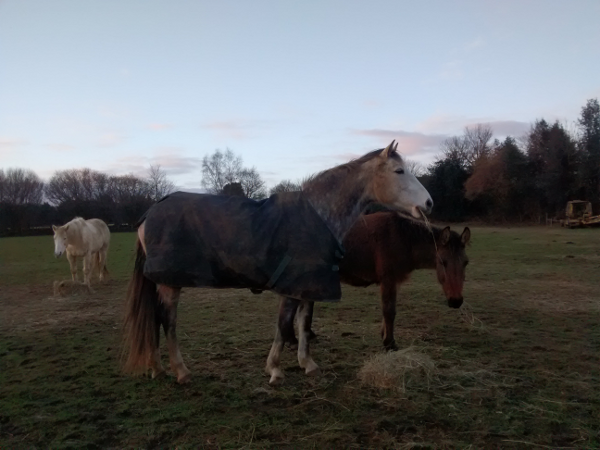 When I entered the field yesterday, Cash was the first to approach me. An interesting result of Stacey‘s visits is that Cash has become a lot less wary of me and is now eager to spend time with me; I’m not sure why this is, but it’s nice! Marty and Iris hung back initially, watching side by side. I fussed Cash and this prompted the mule to make his way over, leaving Iris trailing behind. Marty had his ears forward and there was no hesitation in his walk, so I thought this was a good sign and that I would probably be able to catch him. As he got closer, I could see from his body language that he was thinking about ducking round behind Cash so I tried to project a “no go” area that extended past the pony’s hindquarters (although if you’ve met Cash, you’ll know that his back end is pretty much a no go area anyway. He is one stinky pony). Marty immediately changed course and walked right up to me.

He still had his ears forward and appeared to be feeling quite amenable, so after fussing him I began to put the halter on. I’d got the crownpiece over his neck and the noseband over his muzzle when he suddenly started backing up. I stayed with him, but after a few steps he began to accelerate and I had to let him go as he pulled away. I never hang on to him when he goes like that: partly because I physically can’t hold on to him when I just have a piece of loose rope round his neck, and partly because it frightens him to have me rushing alongside and pulling on him. I’d rather let him go and try again instead of spooking him and losing any of his willingness.

What was particularly annoying about this reaction was that there was zero anxiety from him. Usually, when he runs out backwards, it’s because he’s started thinking about something scary and then it overwhelms him and he just has to get out of there. But this time it was like he just changed his mind on a flash of pure whimsy.

He ran back to Iris (of course), but waited while I approached him. He had his ears back now and his mouth was set, so I stayed well out of his space and just stood there while I waited for him to make a decision. After a few minutes he began to soften and look at me, so I walked towards him – and at that moment, bloody Iris moved in between us and sent the mule away. I was so mad! He went straight back to closed body language and both he and the mare were messing around, hip to hip, running away as soon as I approached and setting each other off.

A few days ago, when I still thought that their friendship was kind of sweet. 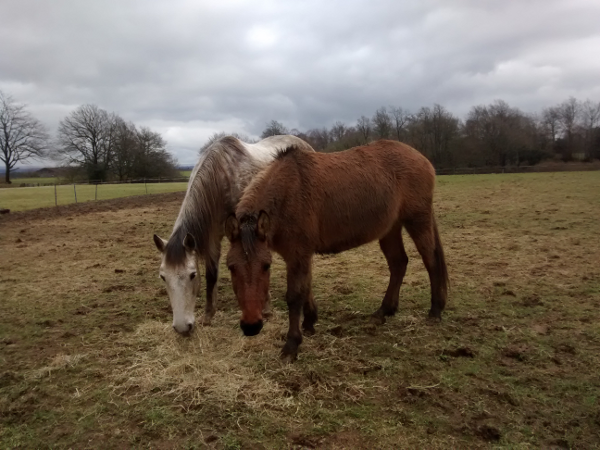 Cash had been patiently waiting all this time, so I put the halter on him instead and took him out of the field to hand-graze for a few minutes on the fresh grass. You can be sure the mule came rushing over at this point, to stand by the fence and stare at me with his ears pricked!

I put Cash away and did some poo-picking before trying again with the mule. All the time I was working he kept approaching me and presenting his left shoulder, which I pointed out was a fat lot of good now that I didn’t have a halter in hand.

When I did try again, thinking to use Karen’s technique if I needed to, that wretched mare kept getting in the way and chasing him off whenever I got to a good spot. She wasn’t interested in me, she just didn’t want the mule to leave or give me attention. And every time she told him to go, it was like everything I’d achieved with him would fall out his brain and he’d be all, “Oh yeh, I remember now, I hate that chick! She is soooo annoying! God. Let’s hang out together and bitch about everyone we hate, YOLO!”

“Look, mule, if you want to be cool and hang out with me, you’ve got to ditch the loser. Right?” 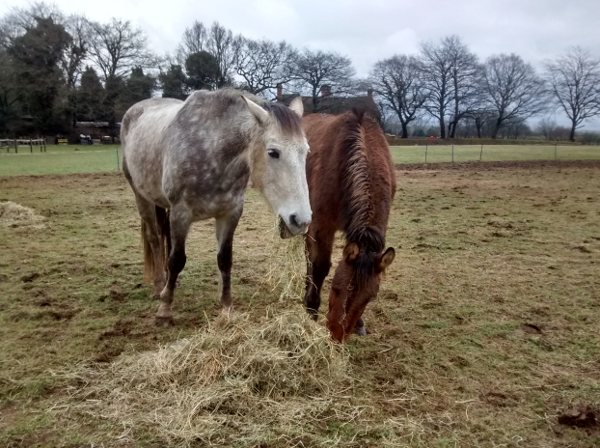 In the end I just left him. I was simply not in the right mindset to pursue it any further: I was cross about the mule changing his mind like that half-way through haltering, and I was cross with Iris for constantly getting in the way, and I knew that if I persisted I would probably lose my temper and that would only make the situation a hundred times worse. I think Karen’s technique is something I will need Ben’s help with – this was not a fair trial, and I’m still interested in applying it another time!

A lot of people have mentioned how much patience I must have to work with Marty, and it’s true – he has taught me to be patient. Sometimes I’m astounded at how long I’m able to keep doggedly trying. But I think being patient also means knowing when to back off completely. You can always try again on a different day. If you’re feeling frustrated or angry, then you will accomplish nothing and there’s no shame in walking away.

Of course, that doesn’t stop me muttering rude things about him under my breath.