It’s been a week since Marty and I went skijoring in the Punchbowl and, apart from that short foray into the village, we haven’t been back out. This is mostly due to wimpishness on my part, but to be fair I feel like there’s a certain amount of common sense in not taking him out there until we’ve got this under control. On both our recent encounters with dogs, his reaction to them has been extreme – and the dogs have been quiet, obedient and under control. If he’s going to panic because a dog looks at him, I don’t want to find out what happens if we meet a boisterous, noisy mutt.

Interestingly, the yard owners’ dog – a chocolate Labrador – was out in the garden yesterday when Marty was in the stable yard, and he wasn’t bothered by her at all. He even felt comfortable enough to face away from her. Sure, he’s seen her around a lot, but given the way he responded to the other dogs I would have expected some alarm or anxious behaviour from him at least. But she was completely off his radar. I wonder why the Labradors in the village were so frightening?

So instead of walking out, we’ve gone back to working on desensitising and saddle work. This needs doing anyway, but I’m interested to know if his dog phobia can be lessened by working on his anxiety about things that touch him and/or make noise. He seemed to be over that for a while, but I’ve noticed that he’s become bothered about things like rustly jackets again.

On the suggestion of a friend, I’ve started getting Ben to video my sessions with Marty and I’m finding it really useful. It means that I can see what I’m getting wrong and where I can improve, and it also serves as a point of reference so I can look back in a years time and see if we’ve got any better! So these are really for my own benefit and are pretty boring. However, I’ll put them here, in case anyone is interested. I even added a soundtrack to them.

Marty looks kind of smug, here. “Yeh, I can totally handle this omg please don’t touch me with that thing.” 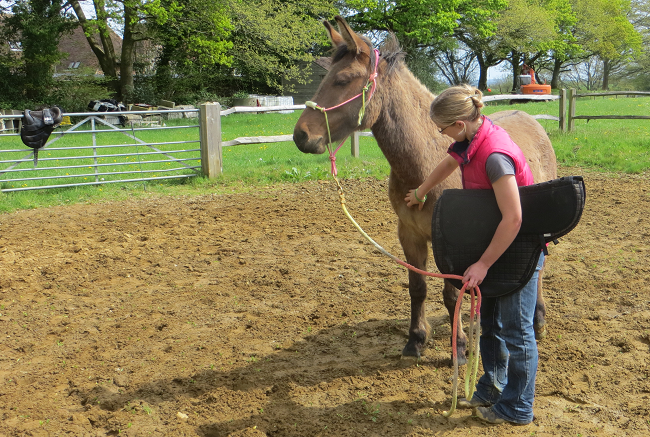 In this one, I’m working with the flag. We used it on him during our first ever sessions together, but haven’t used it since. Therefore, that’s my excuse for how ridiculously tentative I am with it … I mean, bloody hell, I’m practically moving in slow motion. And I was actually trying to be more assertive! I thought I was being assertive! It was only when I watched the videos back that I realised I’d apparently been channeling a sloth.

The second half of the video is just a sample of where we are with our circle work and leading. He was a bit grumpy that day and didn’t want to run up in-hand! During the circle stuff, I’m working on our transitions and keeping him going until I ask him to stop. Previously I’ve asked him to come down from trot and then stop, so naturally that’s what he thinks the job is. I’m trying to teach him that I can ask him to trot, then walk, then trot again.

Oh, and at about 6:30, Iris has a violent spook at … something … so well done to Ben for staying on board and continuing to film!

This video was filmed today, and is the beginning of reintroducing the saddle. I start with the stick and string (the video only shows a little of that) and, as you can see, I’m trying to be more business-like this time!

With the saddle pad, I move from just touching and rubbing him with it to flapping it over his back – I’m trying to swing it over, like I would with a saddle, rather than place it tentatively on him – and then getting him to walk with it. Once he can take a few steps I ask him to walk further around the arena, stopping and starting a few times. Interestingly, he finds it very difficult to back-up when something is troubling him. His back-up is usually pretty perfect, but as you can see in this video he really struggles when I ask him to back-up with the saddle pad on. I think this may be a better indication of his acceptance than walking him forward, which is what I’ve used previously to test if he’s really okay with things.

What I’ve learned from watching this video is how I need to handle him when he’s running backwards. The idea is to stick with him when he does this, so that he doesn’t gain anything by doing it, and then reward his stop. Ideally I should continue doing whatever I was doing that caused him to retreat (i.e. putting the saddle pad over his back), but this is not always easy when you’re short and timid and not as fast as a mule. 😛 I didn’t want to lower the pad as that would have shown him that running backwards stops the scary thing, so I tried to keep it up and flapping around … but it seems to me that all I’m doing is reinforcing backwards. In order to keep up with him I’m stomping along, with my arms raised and my whole body turned to face him, and I think that just sends the message to keep backing up. This is what Monica was trying to teach me: that I should be able to walk faster without changing my intent. So, to improve: just keep the saddle pad in position and stay with him, but don’t drive him.

I want to point out that these videos are just bits and pieces of sessions, and not the whole thing. I spend a lot of time doing the same things over, and over, again.

Otherwise, Marty is being a big old sweetheart at the moment. Today was particularly funny, as he met me at the gate when I arrived to poo-pick, and then ran after me across the field, braying as he went. I tried to explain that I was right there and he didn’t need to shout, but I guess he was feeling clingy. He repeated this behaviour later, except this time his braying was answered by a bunch of dogs in the distance. He stood behind me and peered over my shoulder until the dogs had shut up.

Marty and Cash sharing a haynet. 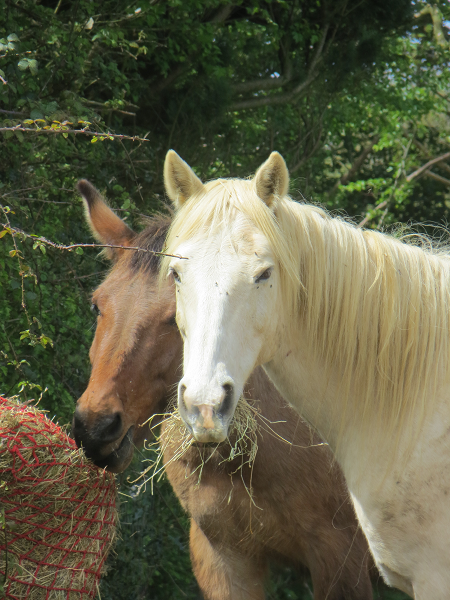