Exactly one year ago today, after a grueling five hour journey, we brought a little dun mule home to live with us. Of course, the journey wouldn’t have been so bad had a certain mule not decided to jump the partition twenty minutes in, get himself stuck, and then require me to physically lift his front end off the bar and travel in the back with him for the remaining 160 miles … but hey, we look back on these things and laugh. Laugh while our eye twitches nervously, anyway.

I wouldn’t recommend that as a way to earn your mule’s affection, but Ben thinks that the reason Marty latched on to me as his human so quickly was because I spent those five hours travelling with him, singing every snatch of song I could remember, and keeping him company. That mule knows all the hymns I used to sing in school assembly. 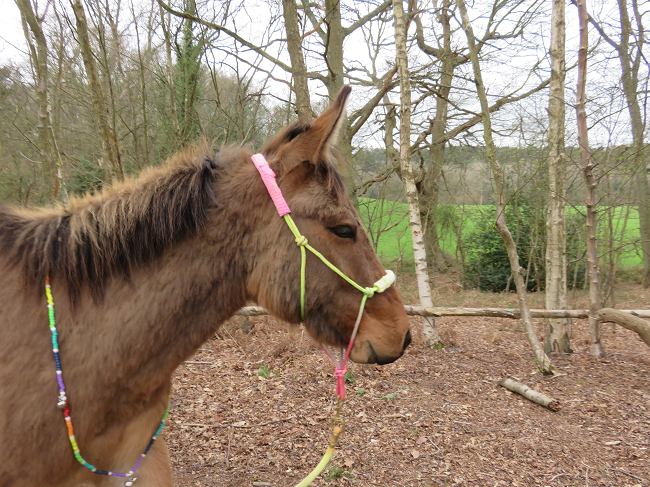 Right from the start, it has been a fascinating, frustrating, wonderful and challenging year. When I envisioned our first anniversary I thought we would be further along than we are now – that I would have sat on him at the very least – and for a while this made be feel pretty down. But Marty has taught me an awful lot. My horsemanship is better because of him, and I as a person am better because of him. Marty has also learned a lot because of Ben and I: he now stands beautifully to have his feet picked out and all four hooves trimmed, he is confident in traffic, he is able to walk sensibly for miles in-hand wearing nothing but a halter, and I feel that his groundwork – which was established wonderfully by Tom – has now been built upon and refined. He no longer reacts to the slightest concern by running backwards at warp speed. His fear of being touched by noisy things has vanished. There are so many things we do now as a matter of course that, if you’d suggested them to me 12 months ago, I would have laughed at. Put bells round his neck? Put a saddle on his back? Surely not! And yet he takes it all in his stride these days. 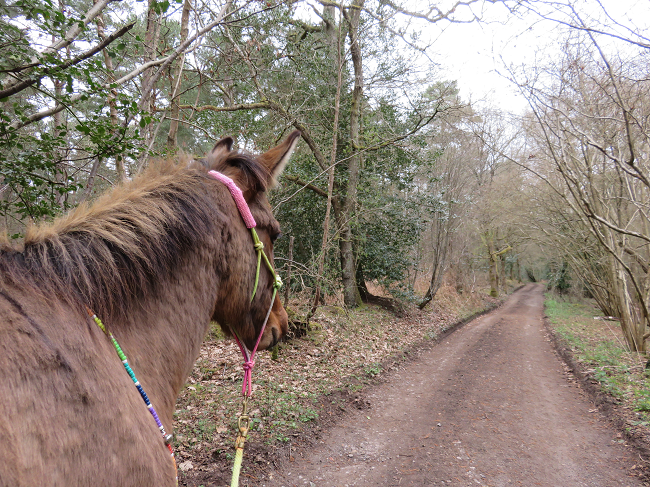 So no, I haven’t ridden him, but another thing he’s taught me is that there is no timescale when it comes to this. And that goes for horses as well as mules. It takes as long as it takes: if your foundation is not solid, do not try and build higher.

To celebrate our anniversary, I took him out on a five mile hike. This hike involved us leaving our usual safety net and crossing a fast road – twice – and following a trail that was brand new to the mule. It was a big thing for us both. Today was also the first day that I’ve tried catching him without Ben around, and I admit that I was expecting him to be silly – particularly as they were moved to a new field last night. But he actually pushed the horses out of the way and came straight up to me to be haltered, and on our walk he was fantastic – no anxiety, no silliness, just my adventure buddy back again! We ran together several times (something else that he wouldn’t do two months ago, let along twelve months back) and it was just perfect.

I wanted to take a nice shot of him with the lake in the background, but he was quite worried by it (or rather, he was worried by the aquatic dog splashing around further down the shore) and every time I stepped back to get a picture, he would hurry after me and snug up against me. Cute, but not very photogenic. 😛 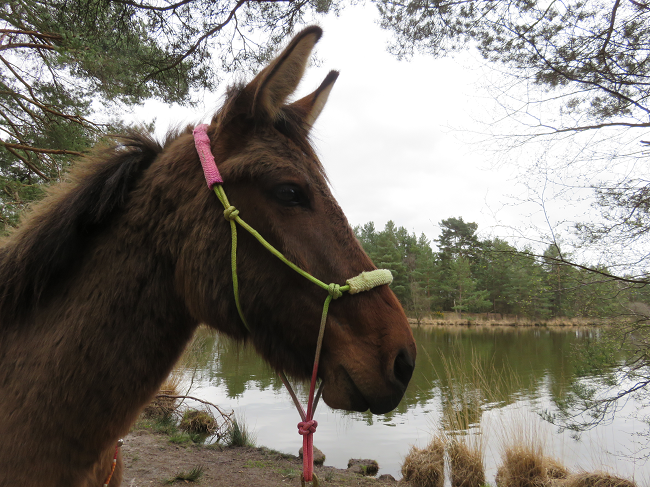 We encountered two hazards that I feel he handled exceptionally well. The first involved a man using a leaf blower on the other side of a high-walled garden. The gardener passed his side of the equally high, solid gate at the same time that mule and I were passing, and a whole load of leaves came shooting out from under it just as we drew level. Marty neatly sidestepped – avoiding me – and swung his bum round in order to stare at the offending foliage, but that was all he did. I gave him a few seconds to assure himself that there was no danger, and on we walked. A few yards further on, we approached a car parked on the side of the road. Its windows were tinted and I could hear muffled barking from within, but Marty seemed alert yet unconcerned. Unfortunately, as we passed, the dogs lost their tiny minds and started flinging themselves against the windows which made an awful din and caused Marty to sidestep again and flare his nostrils. But as before, it was all very controlled, and he was so careful not to bump or step on me.

It was a pretty grey day, unfortunately. The sun came out later that afternoon of course. 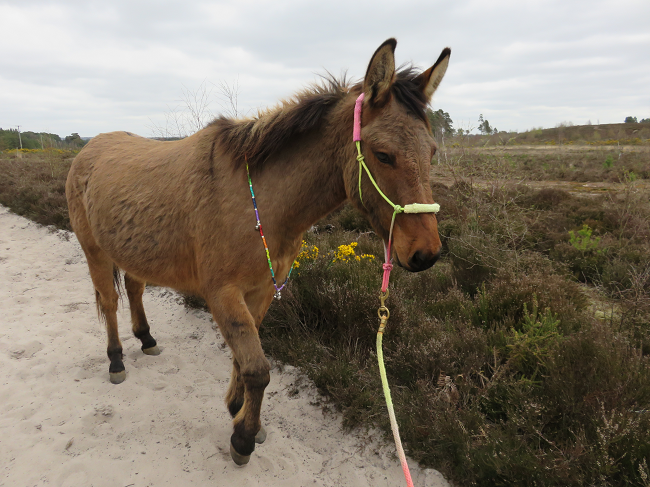 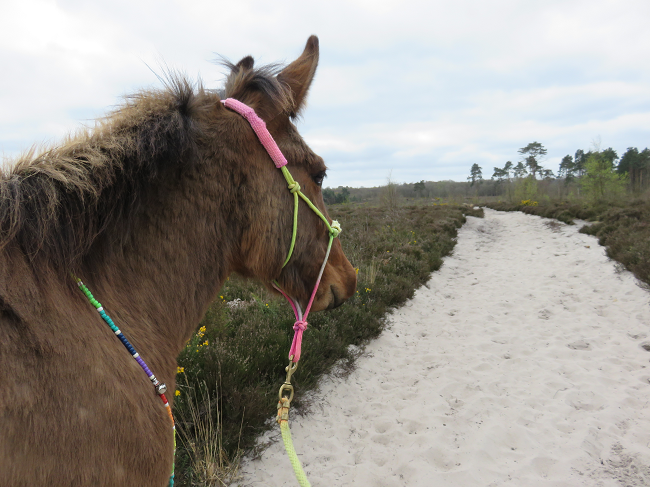 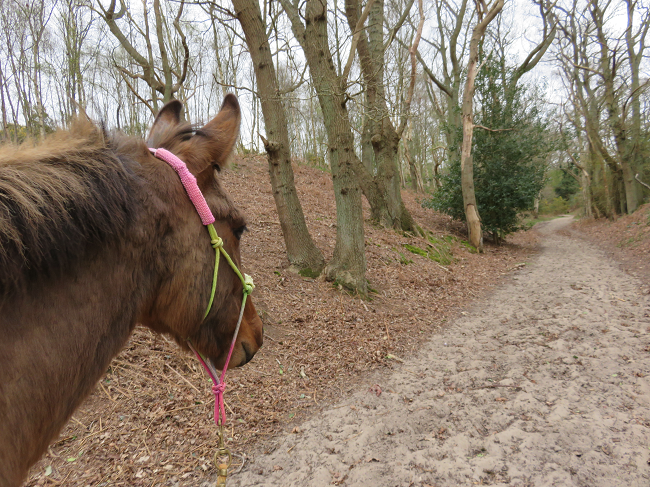 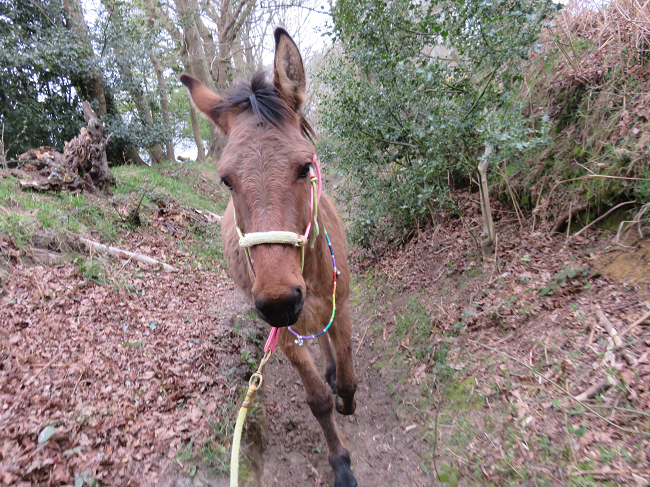 Stopping for a snack on the green (again: not something he would have been comfortable enough to do before). 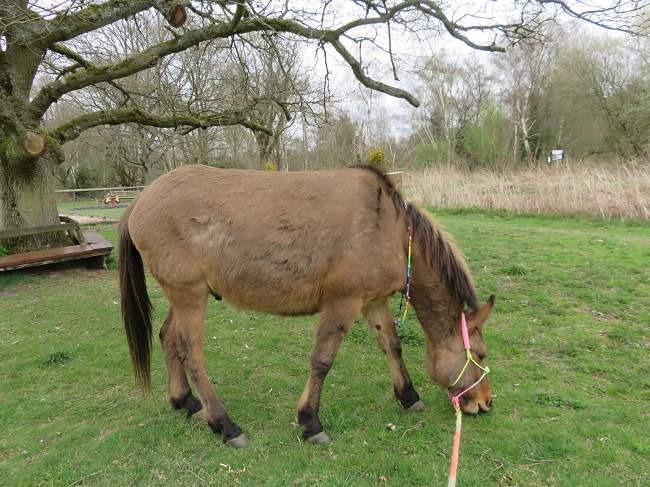 Their new field is tiny and has hardly any grass, but it does at least provide them with a balcony view of anyone passing by on the road. 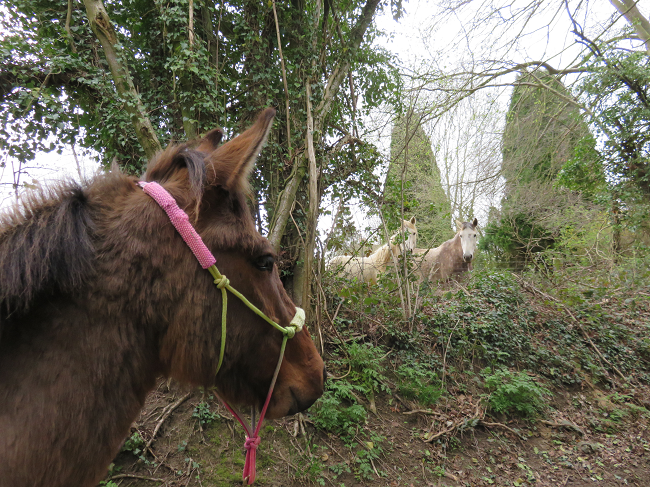 So the tl;dr version is that I am very, very glad I said yes on the evening in March when Ben turned to me and said: “Do you want a mule?”