I have had a very lovely weekend with my mulo, and as I dragged Ben along as photographer I even have some pictures to go with my usual blah blah!

Yesterday we had a little walk onto the common and back, and today I did some more work on saddling. Marty allowed me to catch him on both occasions. I’ve continued to enter the field away from where the herd is gathered and then ask Marty to come over to me; I’ve realised that by doing this I am actually changing the dynamics in our relationship (thanks to Phil for leaving the comment that gave me this brain spark!). Before, I was concentrating on asking the mule if I could enter his space; but now I’m asking him to leave his space and (politely!) come into mine. Although being mindful of his space was important to begin with, I think it may have caused him some confusion as to who was in charge.

He had a crusty eye. I love this photo because there was a time when he would never have let me touch his face like that, let alone clear away eye bogies! 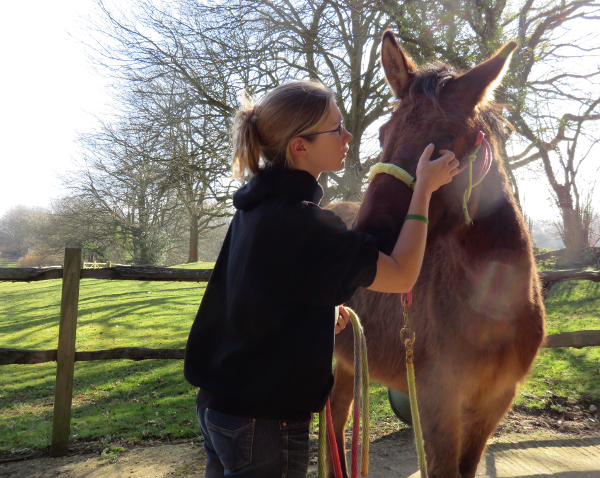 Ever since Marty cleared that fallen tree in the Punchbowl, I’ve been itching to try him over other jumps – and to have pictures to prove it! While crossing the common the other day I noticed a lot of fallen trees that would make ideal jumps, so on Saturday morning we all marched down there with the intention of getting some great action shots. Marty was wonderful on the way down; he had a few stops, but I waited him out (or changed direction while maintaining tension on the rope) and he always walked on calmly. By the time we reached the common he was quite forward-going and eager.

However, before we even reached the first of our jumps, disaster struck: the mule and I were walking through the bracken when the ground suddenly gave way beneath Marty and he fell, knee deep, into a rabbit warren. Now, putting a foot down a hole is scary enough, but to have the ground collapse – well, I would not have blamed Marty one bit if he’d freaked out. But in typical level-headed fashion, he simply fell in, climbed out, and kept walking. I am incredibly grateful for this because if he had panicked we could easily have been looking at a broken leg.

At the first jump, I walked Marty up to the highest-but-safest part of the tree, halted him, climbed over and stepped back to give him space to come through. But he wouldn’t. Ben was ready and waiting with camera and video, I’d been cheerfully telling him how great my mule was, and Marty just. Would. Not. Jump.

He kept moving back and forth, first to the highest end (“Don’t try and jump that bit!” I squealed), then down to the lowest end. He peered over the section that I wanted him to jump, shook his head and stared at me mulishly. I continued trying to persuade him until epiphany struck: what I was asking him to do was totally illogical. He’d jumped the tree on the blocked trail so easily because that had been the only way to get through, but here it was clear to him that he could just walk round it or step over the lower part. Why was I asking him to use more energy then he actually needed to? When he was walking to the highest part, he wasn’t thinking to try and jump it; he was just trying to show his poor, stupid human that I hadn’t needed to climb over at all. I could have simply walked around the broken trunk. It’s lucky that I have a mule to help me with these things.

See how he’s humping up his back in order to step that hind leg over. So methodical and careful! 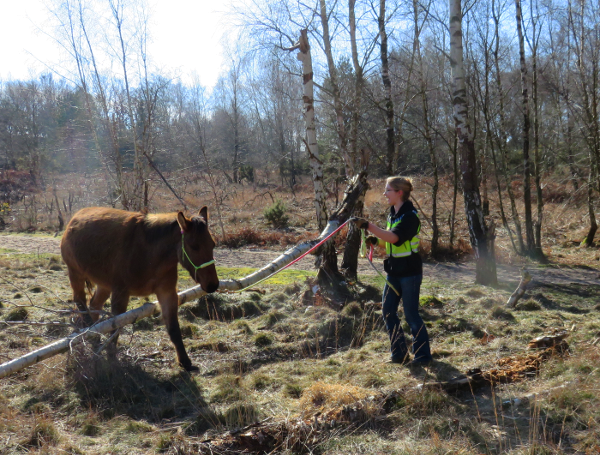 So in the end, we didn’t have a jumping session on the common; we had a Stepping Over Things session instead. It was still something for him to think about, and I think he really enjoyed having to use his brain and tackle something more interesting than the usual clear, level path.

‘Jump’ number two, and he looks like he’s enjoying himself. 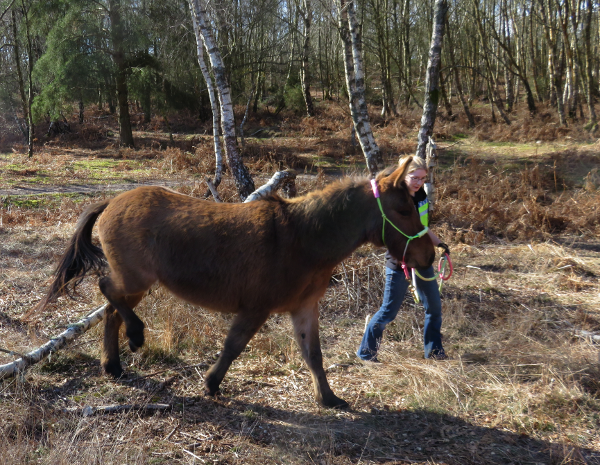 The third jump, by which time we had totally given up on the jumping aspect of the task. Also note how well he blends in with the bracken. I have no idea what I’m looking at. 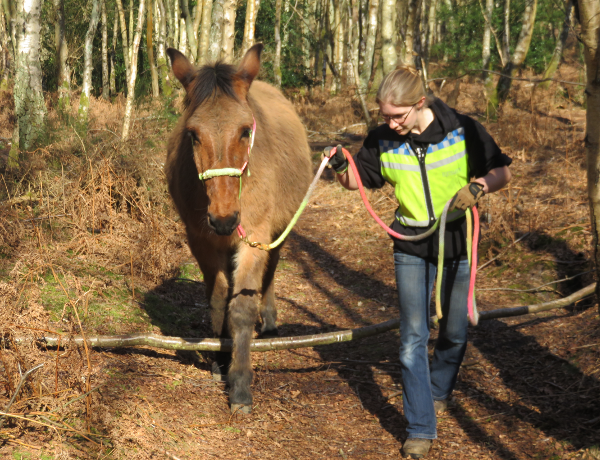 There was an endurance ride passing through the village today, and although under different circumstances I would definitely have used the opportunity to get Marty used to meeting lots of riders, I didn’t think it was smart when we are only recently back on track. We did stand and watch the riders pass by the field, though, and I told Marty what it was all about and that we could do it ourselves one day. I think he liked that idea.

He’s walking out so nicely here – and hey, we’re in step! 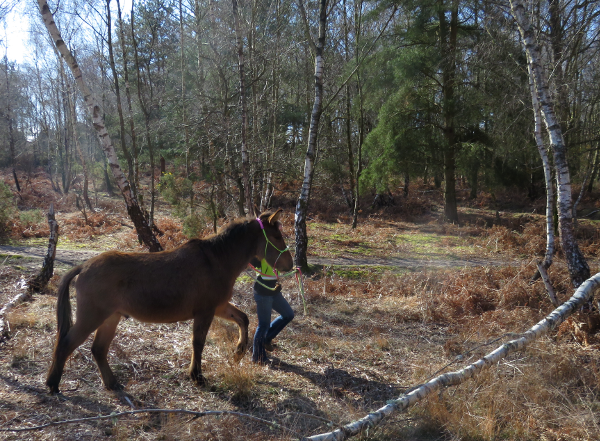 Instead of another outing, I brought him into the arena and popped his saddle and girth on, this time with a nummnah as well. He took it all in his stride. We walked around, stopping to put the girth up another hole, walked a bit, upped the girth a bit, and so on. He was fine with all of this, even when the girth was nice and snug.

Then I asked him to try trotting, and his response was really interesting: if I had him out on a circle, he’d break into trot for a stride or so and then suddenly round his back, his hind feet scuffling underneath him in tiny steps, and slide to a halt. It was almost as though he didn’t think he could use his back legs while wearing the saddle. I persisted for a while but with no result, so in the end I took the risk of upping my energy. I hadn’t wanted to make a fuss because, in this early stage, I didn’t want him to feel overwhelmed and like he needed to buck or leap around. But I needn’t have worried. He actually skipped trot and went into canter, but it was a controlled canter which he maintained and came down from when I asked him to. I figured that was good enough, because he had at least moved and realised he could move, and although it wasn’t the pace I’d asked for he wasn’t silly about it. Later I took the saddle off and sent him out on a circle in trot which he performed perfectly, so that was good.

When I’d initially put the saddle on he’d twitched a bit and kept lifting a foreleg, and I realised it was because the girth was swinging slightly and brushing against his fetlock. But instead of being silly about it, he just drew my attention to the source of his discomfort. He’s so different from the mule who used to throw himself backwards and leap into the air when something so much as touched him. I’m very proud of him.

The weird thing about the trotting-under-saddle problem was that he could trot, and keep trotting, if I ran alongside him. I wonder why that was? Maybe the saddle just moves more if he’s trotting on a curve, rather than on a straight line.

The nicest parts of the weekend, however, were that when I was about to go home he actually left his food and his fieldmates and came over to the fence to call for me on both occasions. Today Ben stayed on to ride Iris after I’d gone, and he said that Marty remained by the fence, staring down to the where he’d last seen me. That’s a pretty good warm ‘n’ fuzzy feeling right there. 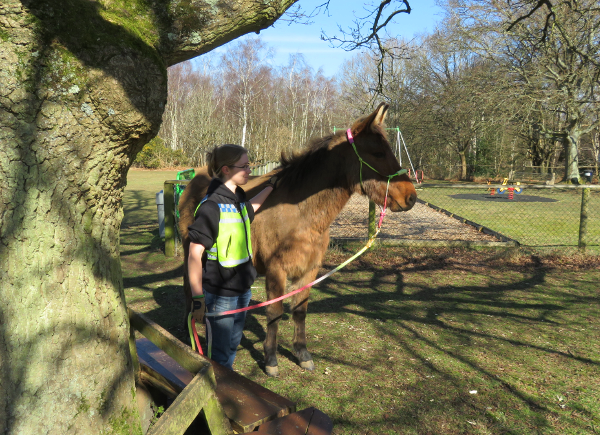