Marty was practicing being a grown-up mule today. They were all due to have their hooves trimmed this afternoon, and to make it easier for me and quicker for our trimmer, I decided to bring Cash and Marty in at the same time and stable whichever one wasn’t being worked on.

Now, I must confess, I haven’t really been working on stabling as much as I should have. He’s never been in one for more than a few minutes, and the last time I tried he was pretty sure he needed to jump out. But we practiced for a little bit until Emma arrived and, after he’d had his feet done, I took Cash out, held the door open, and asked Marty to walk in. Which he did. He then found the pile of hay and settled down immediately. I was impressed!

Who put Boris Johnson in our stable? 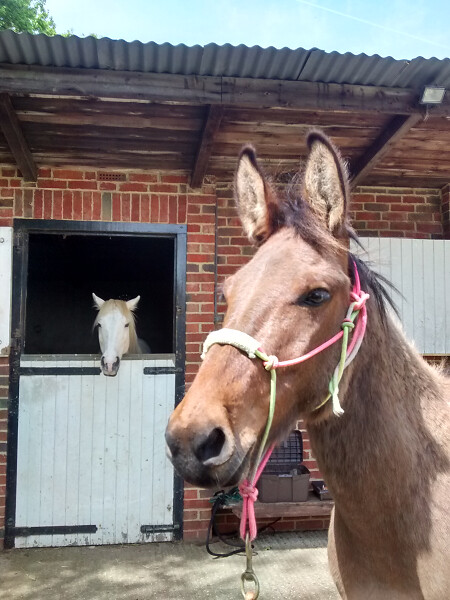 He became quite restless during the final ten minutes of Cash’s pedicure, but I think that was entirely down to jealousy – he wasn’t getting any attention in there, after all. He started reversing and then rushing at the door, pinning his ears and jerking his nose at me, so I blocked him and sent him back a few times until he could approach nicely. Once he could do that, I scratched his chin and he spent the rest of the time completely calm, his head resting on the stable door. 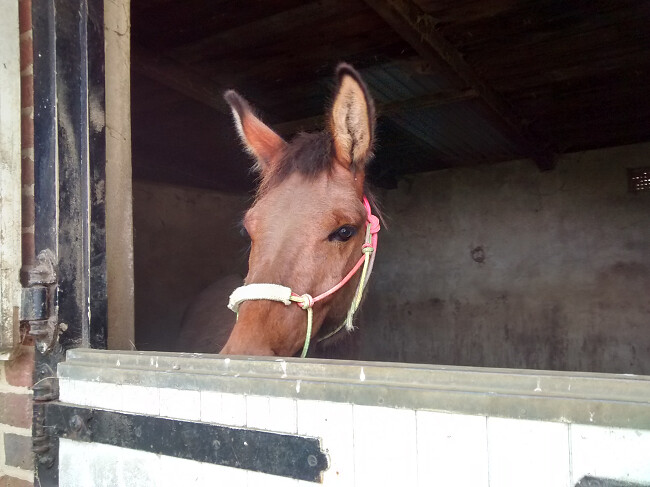 After all three had been trimmed and returned to their field, Emma very kindly offered to help with Marty’s dog phobia by bringing her fearsome and ferocious wolf (read: impossibly tiny and adorable pup) down to meet him. Stacey had suggested that we start introducing him to dogs by bringing them up to the fence and then letting Marty see me pet and play with them. I wasn’t sure if Womble would spark any fear in Marty as he’s about the size of a small rabbit, but Marty was definitely on the alert (although I joked that it was because he wanted a tiny Womble of his own). He kept walking back and forth, trying to see the little dog from every angle, his ear tips practically touching. I stroked Womble and let Marty sniff my hand. 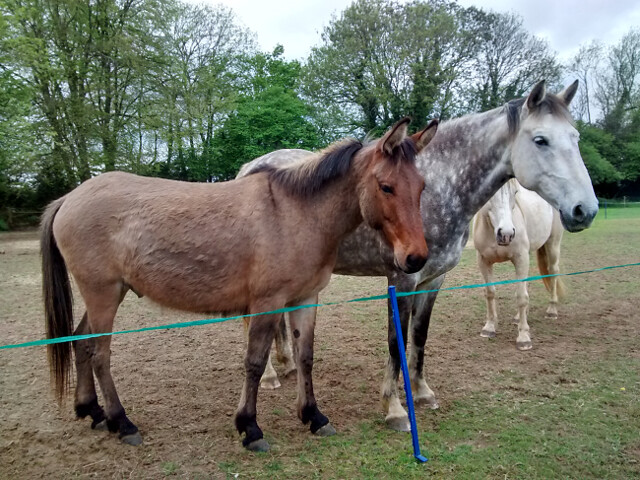 He hid behind Iris once or twice, but only did so momentarily before pushing through to stare at the dog again. He also, hilariously, got Cash with a perfectly aimed sideways kick to the thigh. I had to laugh, because it was totally without warning – Marty didn’t so much as look at the poor pony, and his ears never left the dog – and Cash completely failed to react to what sounded like a pretty firm kick. I guess he was thinking about rainbows and fluffy clouds. Cash’s world is a nice place to be.

He still hasn’t figured out how to use the treat ball. 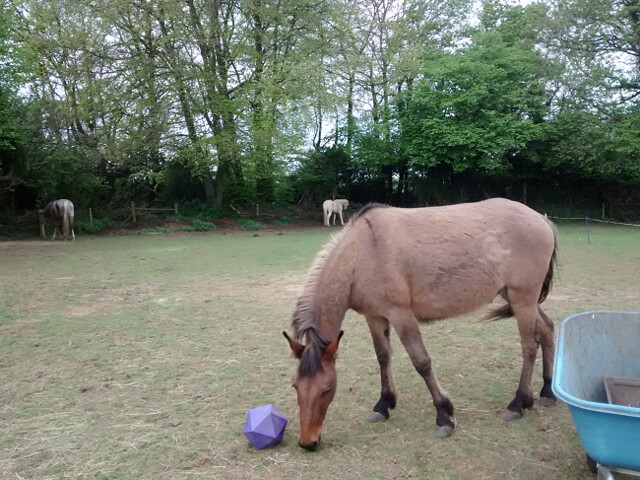 Further absurdity occurred later, when I was tying up their lunchtime munch nets. Iris stole one of them, dropping the lucie brick inside. However, she still had hold of a small fragment within the net, so she just ran off with it – refusing to let me take it from her, much like a cat with a half-dead mouse. Then I had to dash back to rescue the forsaken brick and the remaining munch nets from the boys, before chasing after Iris – bright blue net still dangling from her mouth – while Cash and Marty ran after me.