I have been extremely lax about writing here; I had planned to do a big, New Year post to sum up what we’d done and where we were going, but I constantly found myself staring at a blank page and trying out different combinations of words that just didn’t feel right. The truth is, I was struggling to find anything positive to say.

2015 was my first full year with Marty. At the end of it, with our two year anniversary lurking in April, I was disappointed to find that we weren’t anywhere near where I thought we’d be by now. With a few notable exceptions, our time together has mostly involved swinging from bad to good to bad again. I have reached the point where a good day no longer feels like a good day, because I know that a week later – two weeks, a month – it will be like he’s never been handled before and we’ll have to start all over again from square one. This is extremely wearying.

Marty tries to tempt Cash over to the dark side. 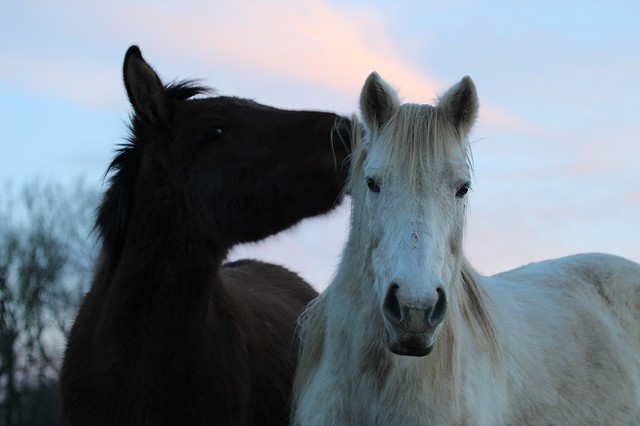 Having met other mules and thrown myself into learning about them since getting Marty, I honestly believe that he is challenging even by mule standards and that he has some deep, underlying issue which I have not been able to get at. There are quite a few odd things about him that don’t quite add up. He is such a sweet, friendly guy who never reacts with aggression – even when he’s sure his life is in danger – and when we get things good, they’re really good; this is what’s kept me doggedly holding on for as long as I have.

While Ben and I were riding with Harry Whitney in Arizona, we met a student of his, Anna Bonnage. Anna is based in the UK and Ben had already suggested her as one of the people in this country who he thought would be able to help us with Marty, so it was really good to be able to meet her and see her work. In fact the entire clinic was really good for me because it helped me re-evaluate a few things and learn to approach my problem with Marty from a practical – rather than an emotional – level. The practical plan I came up with:

If Marty is not going to be the mule for me, then I can at least equip him with as many life skills as possible in order to help him find a better home. 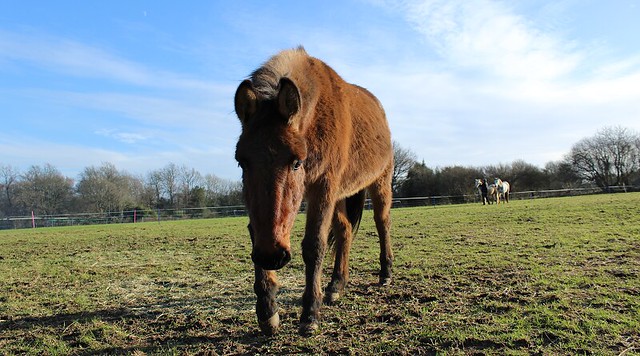 The other part of my plan is to make sure we eliminate any possible physical problems before Marty goes for training. I do have to own this as a failure in my duty of care to him: as Ben and I discussed the other day, had Marty been a horse we would have had every inch of him checked long ago, but as we knew that mules were challenging to work with we naively believed his behaviour was most likely a result of that. That may still be the case, but it will do no harm to rule anything else out. For example, he is definitely worse in wet or changeable weather; last winter was particularly bad and, thanks to the Facebook Memories application, I can see that we were having the exact same issues this year on nearly the exact same day last year (whereas these issues either got better or vanished completely between spring and autumn). I would be interested to see if a bute trial makes any difference, in case it is pain-related (the headache theory I mentioned a while back) or if it’s just that he hates winter!

During a recent session with Ben (I know the halter isn’t set correctly, that was the issue he wouldn’t allow us to change!). 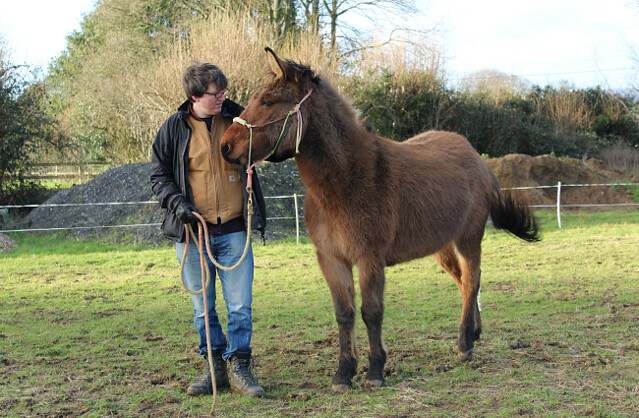 One of the things that really helped me move on from the emotional, feeling-sorry-for-myself stage was a reply from the Stormybracken page in response to a comment I’d left about not having had a very good year with Marty and feeling like I hadn’t achieved anything (wow, apologies for being such a whiner!). She said:

“How to quantify success? Every time one of my horses loads into the trailer confidently is success to me; every time one of them accepts the bit and bridle; we have a bench at the top of our field and most mornings I walk the dog around the fields to check the horses, and then sit on the bench gazing out over the countryside – it is always special when one of the horses, usually Storm or Bracken, chooses to wander over and breathe all over me. Those are all achievements to me.”

It was a little bit of a lightbulb moment for me and I wanted to share the quote in the hopes that it may help someone else, too. That is, after all, what my blog is about – making people feel better because as least they’re not as rubbish as me! Ha! (But seriously: I write what I would have liked to read when I first started out on my journey with Marty. Sometimes it’s nice to know that not everyone is enjoying a perfect, mystical relationship with their mule while you struggle day after day, working insanely hard and yet never seeming to get anywhere. I certainly don’t wish hardship on anyone, but it is always good to know that you’re not alone!).

So indulge me for a moment as I celebrate the small things. How do I quantify success?

All that and he’s cute (although should have been paying attention to Ben here, not me!). 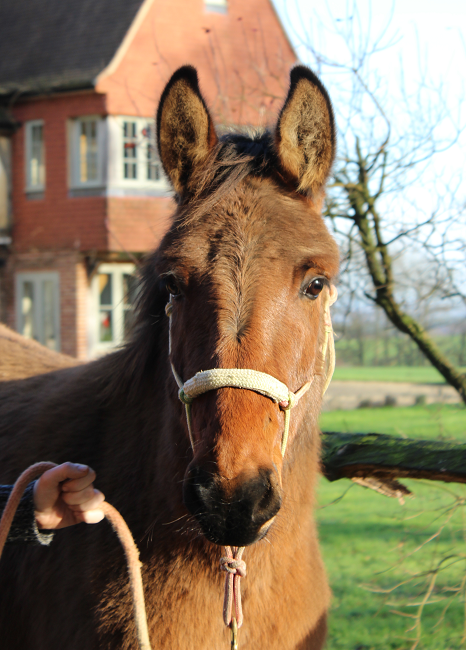 7 thoughts on “A positive-negative entry!”