We’re nearing the end of August and autumn is definitely in the air. The morning’s are feeling colder and the evenings a little darker. Marty started growing his winter coat about a fortnight ago, which makes me wonder if we’re in for a bad winter or if it’s just a weird mule thing. It’s probably a weird mule thing. Most things are.

The herd moved into the newly mown hay field a few weeks ago, which means that we are able to give them a much bigger paddock (I approve of this, and so do they!). We move the fence daily, and as the paddock has grown I’ve been waiting to see if Marty will renounce his halter again. Field size in itself doesn’t have any direct effect on whether or not Marty will be caught, but being in a bigger field does make it a lot harder to catch him if he decides that’s the way to go. Also, I’ve been able to catch him consistently for at least a month, so he was due for a feral moment. 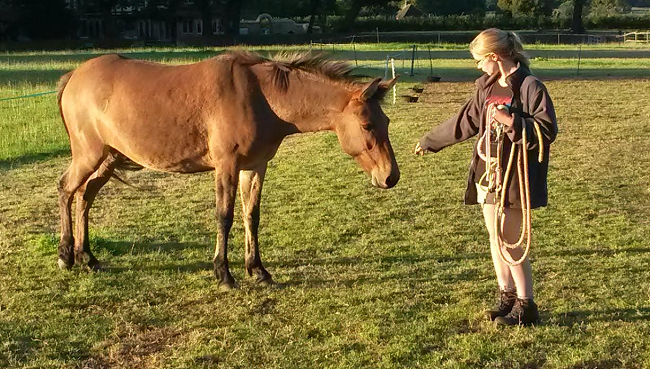 Marty is caught twice a day at the moment, as we’re still maintaining the “fence only gets moved if you’ve had your halter on” rule. A few days ago I caught him and he was very tense; a tension that increased when Cash started nuzzling the pocket of my bodywarmer, and nearly resulted in a meltdown when I accidentally scratched my nail against his halter while giving him scratchies. Marty’s problems with catching appear to have no sound logic to them, but there are two things that almost always coincide with not wanting to be caught:
1. Rain – or, more specifically, a mule who is wet from the rain
2. Rustling sounds
BUT: it doesn’t always have to be raining, or have been raining at any point, for him to be objectionable about haltering.

As I’ve mentioned before, sounds – particularly rustling and scratching sounds – really bother him if they occur while I am touching him, and this applies to any part of his body although I think the nucleus of this problem is centered around his head/ears. However, he does not appear to have the same issues with being wet, as I can touch and rub on him while he’s wet so long as I’m not trying to put a halter on him. His ears, of course, are always out of bounds regardless of any other stimuli. Did some trauma befall his ears that involved the sound of rustling? Or is it just a simple case of “don’t like” – the way some people can’t stand the sound of soup being slurped – and nothing that needs investigating? As hard as it is to figure out the source of his aversion, just ignoring it is not the easier option because it makes life so damn difficult. 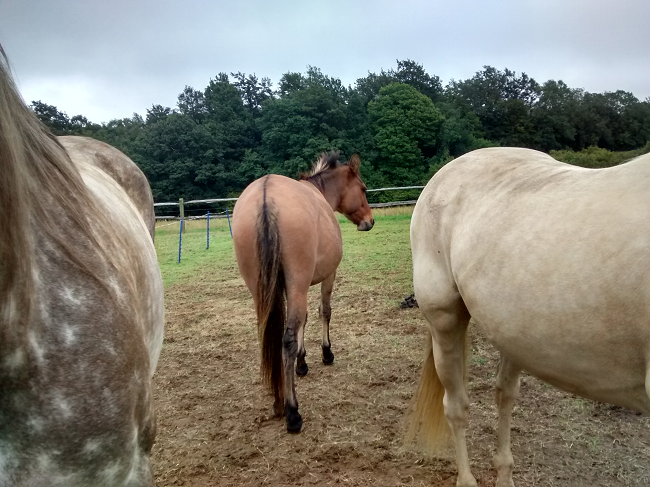 When I went back later that day to catch him for a second time, it was raining so I’d taken off my waterproof jacket as I know he can’t stand it even when it isn’t raining. Do you see what I mean about not being very practical to work around? So, sacrificing my dry skin, I proceeded to halter him the same way I had that morning. Unfortunately, he waited until I was putting the crownpiece over his neck and then snorted in alarm, whipped round and took off. We had a while of playing approach and retreat after that, with him snorting and boggling at me like I was some monster risen from the deep, and once I was able to approach his left and touch his shoulder without him running away and I went and did something else for half an hour. When I came back he’d dropped his anxiety and was full of sour, grumpy faces at me instead. He still didn’t want to be caught, but he was less flighty in his reactions. So I put the halter down and did the poo-picking instead. I ignored him completely, but he followed me all round the field with his ears pricked and when I picked the halter up again he finally allowed me to catch him.

That approach worked and was fine, but only because I had the time to do it. As much as I would like to spend all day with him, I do have to work and I know not to start anything that I can’t see through to an acceptable conclusion – and acceptable means a conclusion that leaves him feeling good about the session, not necessarily one that sees me attain my original goal. 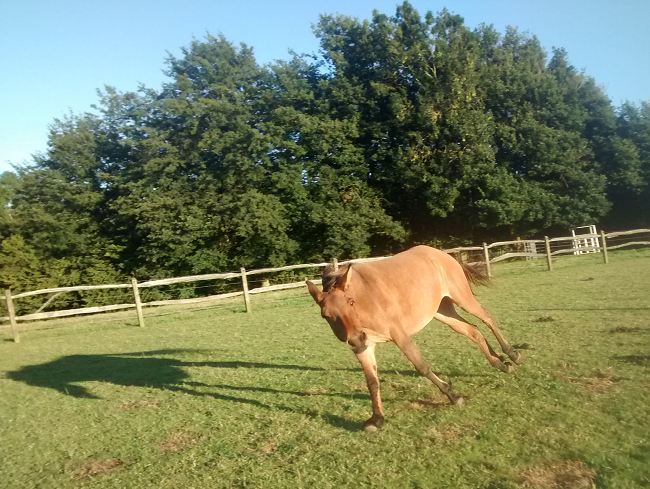 The next day I didn’t have this time, and so the morning catch was omitted and Ben caught him for me in the evening after a few minutes work. The following day I skipped the morning catch/fence move again, but caught him straight away that evening and we went on to have one of the loveliest, most mellow sessions we’ve ever had. For the first time in a long while I was able to look at him and see that solid, one-in-a-million mule he really is underneath all that seemingly erratic anxiety.

The next day it was raining, and he didn’t want to be caught again. This is where we are currently at. I’ve been working on simply approaching and standing by his left shoulder when it’s raining, then rewarding him, as previously he was turning himself inside out just to keep me in his right eye.

“I have made a terrible mistake. Take me back.” 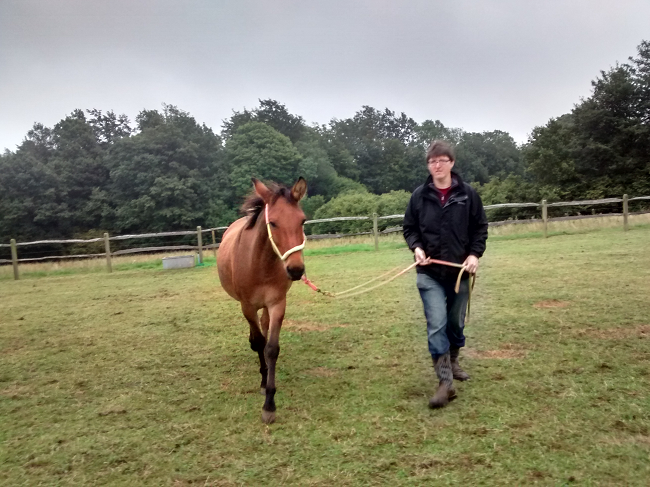 One of the things I’ve taught him is to lower his head when I’m taking the halter off. Lowering the head relaxes those neck muscles that Marty likes to keep tense and tight, and Ben had already taught Marty to give to gentle poll pressure (by simply placing a hand there). I then introduced it as something that precedes his halter removal – every time. That mule is incredibly smart and he picked it up straight away. The first time I had to apply a little pressure to ask for a lowered head; the second time, just me putting my hand on his poll was enough. The third time I literally just thought “I’ll take his halter off now” and he immediately lowered his head without me needing to touch him at all. He now understands this as a normal part of unhaltering and I haven’t yet had the panic or run out backwards that sometimes accompanies halter removal. The purpose of this exercise is to eventually translate it to becoming something that precedes his halter going on, in the hopes that he can be as relaxed about being haltered as he is about it coming off. This version is a little more difficult but I’m hoping we can get there and that it will be as much of a turning point as I think it will be!

Ben has suggested that I keep a journal on catching and I think this is an excellent idea. Obviously I have been looking for connections and some kind of logic behind this recurring behaviour for the past 16 months, but I think having it all written down will help me see any patterns there might be.

So watch this space for another exciting edition of “Why The Hell Didn’t I just Buy A Goldfish?”!

Being near me with a halter is a no-go, but walking straight up to me and investigating my umbrella? Sure, that’s fine. 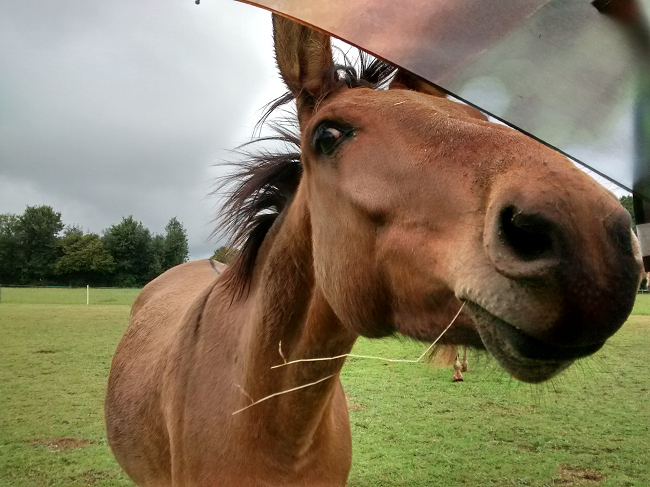