At the beginning of the month, I took a couple days off work and made the journey down to Devon to visit Marty. As I don’t drive, this was a fairly epic trek that involved six hours of train and bus travel. Some may say that choosing to send my mule nearly 200 miles away for training might not have been a sensible decision in that case … but you have to be prepared to put the miles in when it comes to mules, and that applies to finding the right trainer for them, too!

I don’t feel much like going into an in-depth write-up, so this will mainly be a picture post.

Marty wasn’t sure about being caught. Here, Anna goes left as he goes right, which draws him round to face her. Note that his ear is focused on Anna. 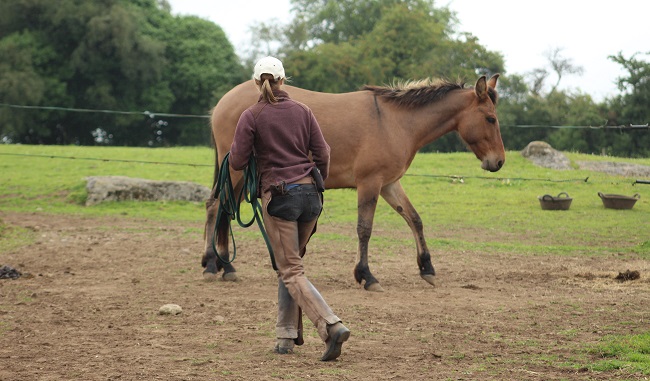 During the first week, Anna found that Marty was more comfortable if she caught him using a neck rope. I have used this method before, although I was wary about relying on it as I knew I couldn’t hold him if he chose to leave and wasn’t keen to teach him that he could. Anna solved this by using a ring-rope, and making sure that Marty understood how to respond to it. By the time I came back, she had improved on this by using a lunge line which could be clipped easily in place, rather than having to thread the rope through a ring every time. This was to make it easier for me to take over, as the aim was to be able to go out into a large field, catch him like this, and lead him out. It’s also important to note that the material used had to be carefully selected, as stiff, ‘raspy’ rope really worries him. This lunge line is nice and soft. 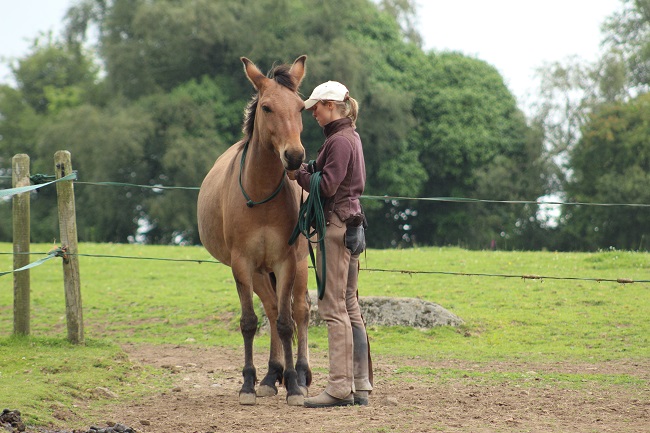 “When a horse knows how to respond to something then there’s no need for them to worry about it”.

This is the theory behind using the ring-rope as shown here. It is either teaching him to back up off it or come forward off it. It has a purpose.

Here, you can see Anna using the ring-rope around his butt. You can also probably see that he is exhibiting some tension, but as soon as he remembered how to respond and stepped backwards, he relaxed. There are very few mules who can wear a saddle without needing britching or crupper, so getting used to things around their hindquarters is pretty important in their education. 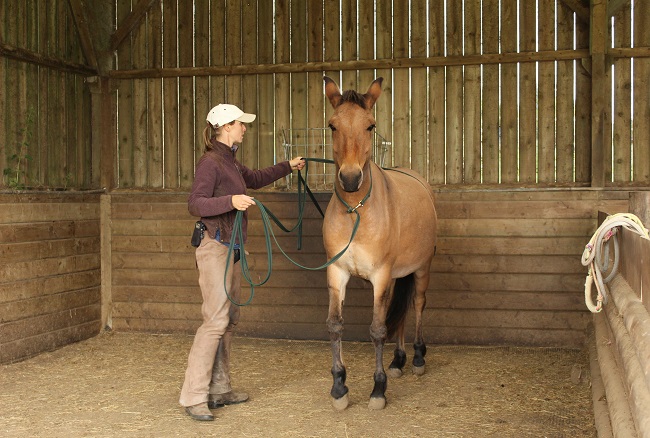 The same method is being applied here, with the ring-rope now around his belly. He knows that a bump on the line means to go up a gear. 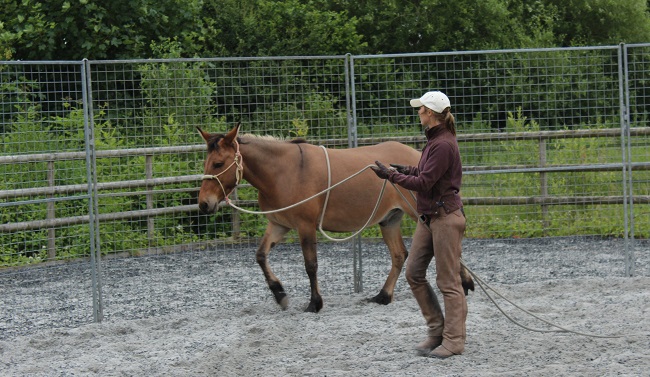 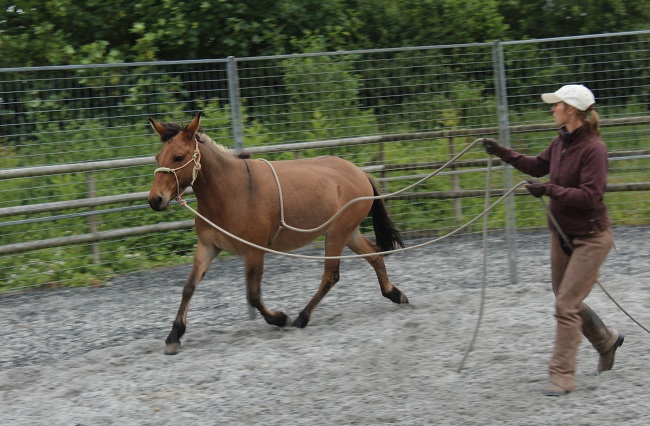 Here, also, with the foot rope (and yes, that is his saddle he’s wearing!). 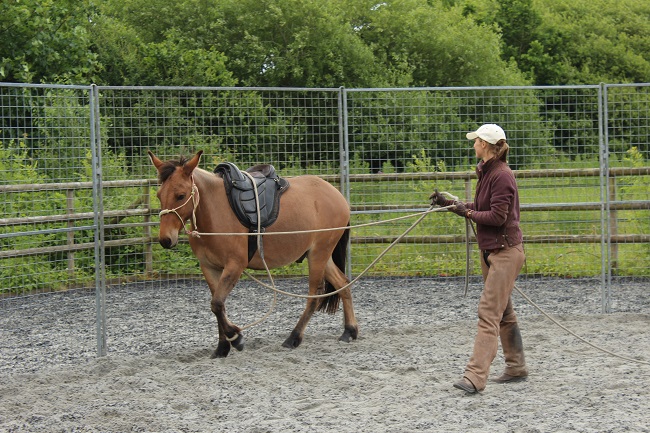 He can now walk under the swimming float and even brush it with his ears. 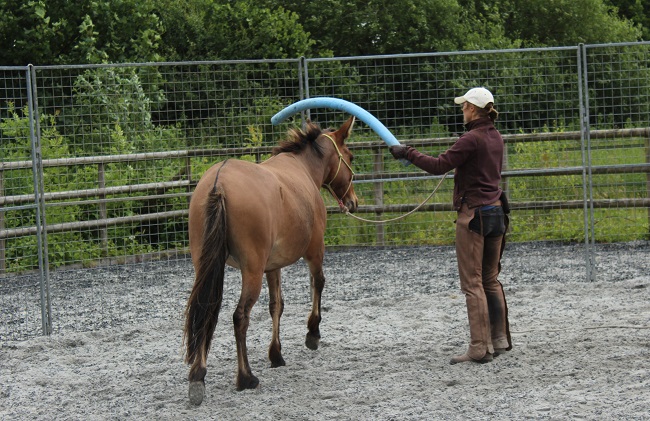 I don’t think I wrote about the shower curtain on here – these are Anna’s words, from the end of week one:

“When Marty arrived it struck me how much he doesn’t want me or anything touching his ears or poll area. I started thinking about this. I need to work on him feeling better but I don’t want to focus on the problem, as this could make more of an issue out of it.

While working to help Marty gain confidence in other new areas I also thought about the fact that he spends 22 hours a day without me around, 22 hours where he could be working on a puzzle to solve his fears of things touching his ears. So with the help of my landlord I securely erected 2 shower curtains across the barn entrance.

This is not an attempt to desensitise Marty, it’s a puzzle for him to have time to think through. You hear of people hanging stuff all around a horse’s stable, this I don’t agree with, as a stable is a small space where the horse can’t escape, it is forced upon them so they very often shut down and learn displacement behaviours in order to cope. In Marty’s puzzle he is able to be out of sight from the puzzle and when he decides he wants to approach he can walk under the showers curtain IF he wishes. He has plenty of food and water on both sides of the shower curtain so he doesn’t feel stressed and forced to cross under it in order to eat for example.

On the morning of day one I tied up all of the shower curtain strips and initially had nothing hanging down so that the puzzle felt easy to him. I didn’t want him to get into the barn, turn around and then fear how he could get out again while I wasn’t present to help him.

In the afternoon I noticed that he had crossed under it and eaten his hay in the barn so I pulled down one strip of shower curtain that afternoon as seen in the photo.

Today, day two, I had seen that Marty had been in the barn again so I pulled down two more strips. Marty then followed me into the barn of his own accord, walking around the end of the strips carefully so as not to touch them.

Over time I plan to bring down one more strip of shower curtain each day. If he stops going in the barn then I’ll leave the same number of strips down for several days to help him try. What’s important here is to notice what Marty is telling me and only increase the number of strips hanging down when he feels ready. The more strips that come down will initially touch his sides which will increase his confidence to eventually duck his head down and let his ears push through the curtain strips.”

He is still not brave enough to walk through it on his own, but derives a lot of confidence from having Anna walk through ahead of him. 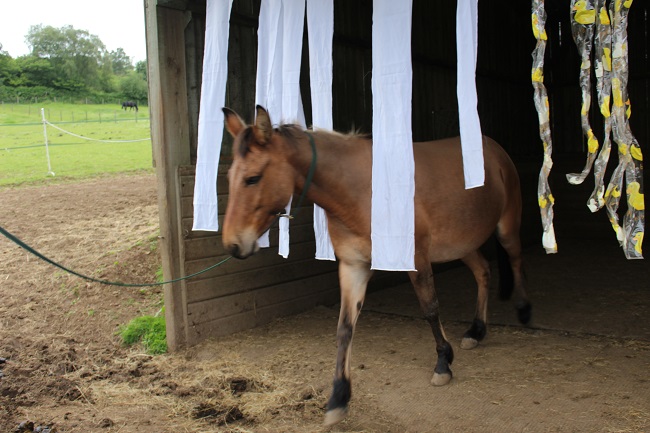 He can also back up and touch it with his butt. This was a particularly great moment: the wind caught the curtain and the strips fluttered against him, but he did not flinch. Such a huge change for a little mule! 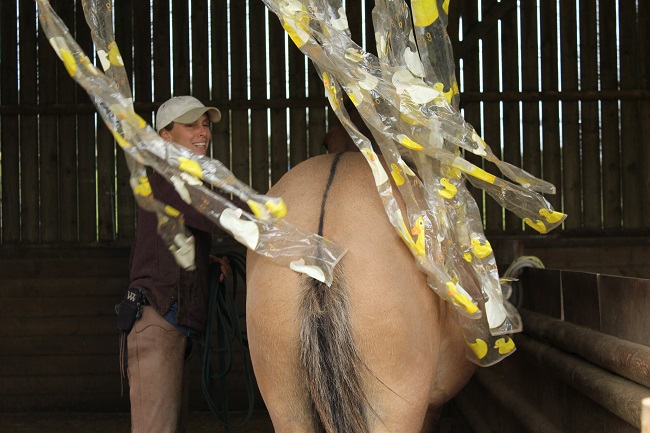 To keep costs down, I opted to camp overnight. Anna’s landlord had kindly leant me a tent, but due to a combination of laziness and the fact that my inner-child was clamoring to be heard, I decided to bed down in the barn next to Marty instead. It was all very exciting until around 1am when the sheep came in from the field. They would not stop shouting at each other (sheep don’t go baa, they go “BLOOOOOORT”), and eventually, when even earplugs didn’t help, I put some music on my phone and managed to fall asleep to that.

The plus side of spending so much of my night awake was that I got to listen to how Marty spends his time. And the answer is: being busy. He had a lot to do. He never ambled anywhere – his walk always sounded very purposeful. 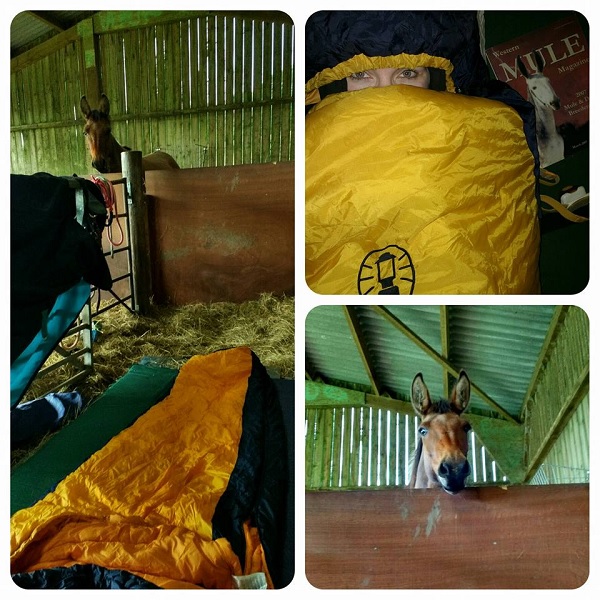 I took this photo just because it amused me to realise that Marty’s rug and my back support were an absolute perfect match. I couldn’t have done better if I’d tried. So I was extremely disappointed when it turned out that the rug was far too small for him! He hadn’t been very keen when I’d tried to measure him for it, so I’d made a (poorly) educated guess. At least Anna was able to put it on to see that it didn’t fit, though. That’s another huge change for Marty. 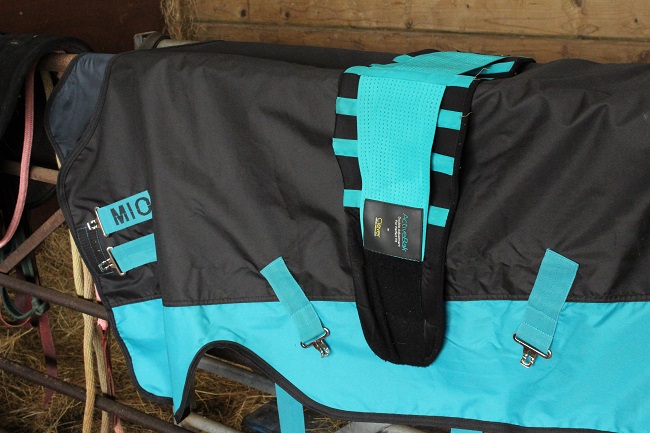