A few weeks ago I ordered some rhythm beads (in rainbow colours, of course!) from NellyMoon. These are equine necklaces that have bells on, intended to calm the horse and help them focus, and the beads are also supposed to affect them depending on what colour they are. I’m not entirely sure I believe that (my old mare had a set in green, which is the colour used to promote serenity and calm. Ha. HA. HAHAHAHA), but I do think that there is logic in the use of bells. For Marty specifically, I was curious to see if it would help him overcome or at least handle his fear of Things That Touch Him And Make Noise.

The beads arrived beautifully wrapped and in the best smelling vanilla-scented packaging (it’s not weird that I stood for some time just sniffing the included josticks, is it?). I was really pleased to find that they were of a fantastic quality, too. Chunky enough to feel substantial, yet not so robust that I’d be worried about the mule getting tangled in them in the event of an Incident. They’re not intended to dangle past the chest and you should never leave an equine unsupervised in them, but as we all know, accidents happen.

Knowing how easily alarmed the mule is by the combination of noise and touch, I didn’t want to risk flooding him by making him wear them until I was sure he was ready. To begin with he was certainly pretty wary, and I spent some time just jingling them in my hand as I led him to and from the field, or while he was grazing. I progressed to touching him on the neck with them while they jingled, which he tolerated, but I still didn’t think it would be wise to put them on him yet. The last thing I wanted was for him to try to get away from them, realise they were attached, and then scare himself.

The beads then went on the back burner for a while as I had other things to work on with him (like catching, for instance!), but I brought them out again today to see where he was at. I started with jingling them in my hand, then approached him with them which made him back off. Once he stopped retreating, I stopped too, and when I tried again he was perfectly happy to let me touch him with them. I did this on both sides, asked him to walk while the beads were jingling against his neck, and then draped them over his whithers and did them up. We walked around a bit and then called it. I hadn’t really expected to get them on him today, but he’s surprised me before by being completely fine with something that bothered him previously; Ben says it’s latent learning. Quite interesting to know that he actually goes away and thinks about this stuff, even if there’s a fortnight or more between sessions.

I’ll make absolutely sure that he’s fine before taking him out or working him in them, but hopefully they and their noise can just become a part of his daily work life. I’m hoping that once he’s used to the constant jingling he won’t be so bothered by things like buckles rattling, which have upset him before. Whether the beads actually help him or not remains to be seen, but he does look freaking cute in them! 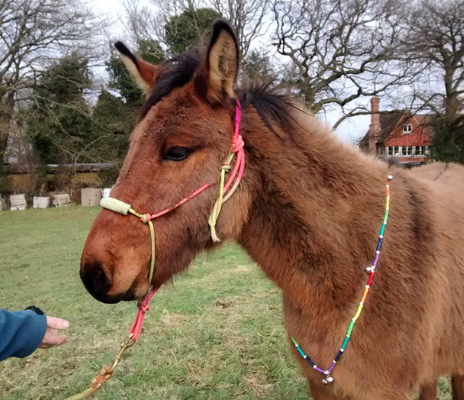