Oh dear. I feel like this is turning into some kind of farce: the mule would not let me put his halter on today. In fact, this is the first time in nine months of ownership that I have not been able to catch him.

Due to work commitments, I haven’t been able to handle him for two days (beyond the usual scratchies and hugs when I feed him, etc.), but I had some time off this afternoon and as the weather was so bright and beautiful, I thought he and I could go for a nice little stroll around the Punchbowl. It started out well enough, as mule walked right up to me when I arrived and was perfectly friendly. But then I showed him the halter and away he went.

I followed him around, lazily swinging the tail of my rope (the idea is not to chase him with it, but to just be annoying to him; when he stops and looks at me, the swinging stops too. This technique has never failed me so far), and mule tried his favourite evasion technique of running to one of the horses and hiding behind them. He’s actually a bit of a jerk about it, as he’ll run full tilt into them and then bite their neck (Iris) or their bottom (Cash). I don’t know why the horses don’t just give him a good kick.

Eventually Iris came over to me and brought the mule with her, and he stood happily while I rubbed his forehead and scratched his neck and rubbed my hand up and down his mane (remembering how he’d reacted on Saturday, I wanted to make sure that he would be oki with me putting the halter behind his ears). He was absolutely fine: there was no sign that any of this was bothering him. I reached up and put the crownpiece of the halter over his neck, and as I did so the rope rasped slightly against his mane (which is quite coarse). He started breathing heavily and tensing up, every atom of him threatening to reverse, and although I tried to reassure him his nerve broke and he rushed out backwards.

The next half an hour or so involved him galloping around and crashing into the horses, interrupted here and there by him approaching me (and then running away when he thought I was about to halter him), and later by him approaching me and then pinning his ears before I could touch him … and running away again. Was he playing, I thought? But no, the ears and his overall body language seemed to suggest that he was pretty angry.

I was getting a little fed up of this, so I moved a section of fence so that the horses could graze and stay out of our way. Mule wanted to graze too, but I stood in between them and made it clear that if he wanted grass, he had to come and talk to me first. He figured the rules out pretty quickly but refused to play by them, and so instead we stood regarding each other grumpily. At one point he licked and chewed, but would still not let me touch him. One interesting thing to note was that he was no longer attached to the horses; twice, Cash left the grass and trotted round in a loop behind the mule, but Marty made no attempt to follow him. I’m pretty sure that he understood exactly the choice I was offering him: stay there, or come to me and have some grass. He’s a smart little guy. But being smart doesn’t mean compliant!

This is the little grumpy face that I stood and looked at for twenty minutes. 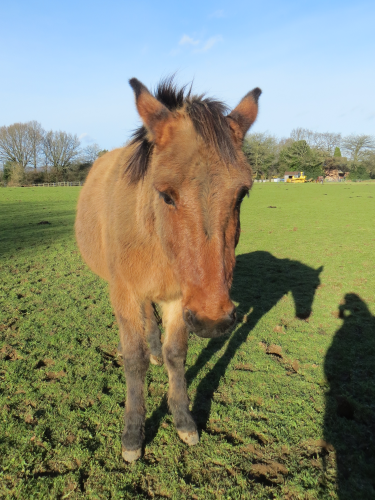 After twenty minutes of waiting each other out I got pretty bored, and decided to see if a more forward approach would work. After a couple of tries he let me rub his forehead, but pinned ears and made nasty faces if I tried to touch the left side of his face (I halter from the left, and he’s learnt to keep me on his right if he doesn’t want to be caught). I persisted and was eventually able to stroke his left cheek, but was not allowed to put myself closer to his shoulder.

By this time I’d spent well over an hour trying to catch him, and with the afternoon fading fast, I was faced with a decision: keep trying until I have to go back to work, or quit and stop for lunch. I’ve always believed the old maxim that if you try to do something like catch a horse (or mule) and fail, then you should keep trying until you achieve your aim or else the horse (mule) will think they can “get away with it”. But I also kind of wanted a cup of tea and a sit down. I could keep trying, but if I didn’t catch him (and that outcome was looking dubious at best) then at the end of the day I’d have one grumpy mule and one very grumpy me. Staying on your feet for eleven hours straight is no fun at all. Anyway, I tried one last time to approach him and he pulled some decidedly nasty faces at me and stalked off, so I flipped my rope and sent him away. I also put the fence back so that he didn’t get any of the fresh grass at all (not that the horses had left much of it by then). I didn’t want to be mean to him and I wasn’t thinking of it in terms of punishment, but at the same time I wanted to make it clear that he’d made a bad choice. I was also wondering if the sugar content was a little too high in this particular patch of grass, and that was where his behavioral changes were coming from. With mules, this is entirely possible.

There’s a mule out there somewhere. 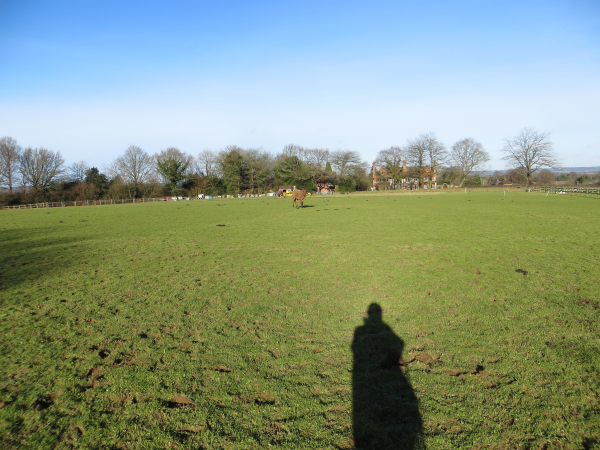 He’d begun to walk back when I’d moved the fence, and I was interested to note that as soon as he realised I was leaving he stopped abruptly and watched me go, before he went to investigate the grass. It was almost as though he was surprised by my departure.

At this point, I wanted to go straight home in a strop and maybe, y’know, eat some ice cream and cry; but I am an adult (or so they tell me), and there were chores to do. So I dropped the halter, put my earphones in, dragged out the wheelbarrow, and got on with the poo-picking. I’d been working for about five minutes when I suddenly glanced up: there, outlined in a halo of burning gold, the sun behind him, was my mule. He walked purposefully across the entire expanse of the field and – yes – came straight up to me. I said hello, reached out and stroked his neck – the left side of his neck – and he didn’t so much as blink. What an extremely irritating mule, I thought.

I didn’t want to punish him for choosing to hang out with me, but at the same time I wanted to make it clear to him that he doesn’t get privileges – treats, scratchies etc. – unless he’s got a halter on. He never gets treats unless he’s been haltered, but I think I will have to place an embargo on scratchies too; for the time being, at least. So after rubbing his forehead and stroking his neck, I just turned away from him and got on with what I was doing. He followed me around the field for some time, waiting quietly beside me as I worked and occasionally receiving a head rub for his patience, but I gave him only my briefest attention and ignored him completely when he asked for his beloved butt scratchies. Eventually I stopped to top their water buckets up; mule took a drink, and when I walked away he didn’t follow me. He stayed where he was for a little while, watching me, then turned and walked back up the field to where the horses were (although he did continue to watch me for the rest of the time I was there). This upset me less than it would have normally, because at that exact moment my MP3 player had chosen to play a particularly melancholy piece of music with an extremely weepy string section; you know the sort of background music they play in those cheesy films when they really want to tug on the audiences’ heartstrings? It fit the situation so well and amused me so much that I just walked away chuckling, wheeling my barrow of poo before me.

A brief warning to anyone reading this blog and thinking that you, too, may like to own your own mule: mules can, and will, cause insanity. They will cause frustration, and bewilderment. They may even make you question life as you know it. But if you can come out the other side and just keep plodding on with a calm determination to make things awesome some day, still loving that hairy little beast more than anything in the world, then I can guarantee that you will be a better person because of it.

This was after I’d sent him away; I had to zoom in and get a picture of him, because I am a bad person and it made me laugh. He is having some extreme teenage angst right there. 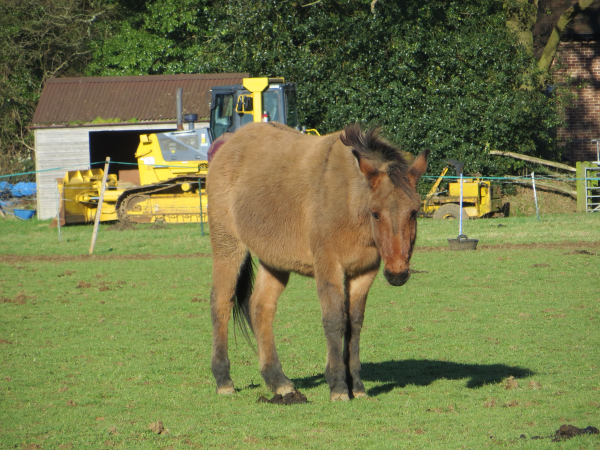 1 thought on “Ways to be a better person; mule edition”