Wow, these last 12 weeks have flown by. It’s crazy to think of the things we’ve collectively gone through in the last three months; remember when those frequent storms, which fell without fail every weekend, were the worst of our worries? Oof. The Covid-19 pandemic has done a number on many of us and it was extremely kind of Top Barn’s Rhian and Zoe to allow the group an extra week ‘off’ due to mitigating circumstances.

My 12 Week Challenge
As far as my own 12 Week Challenge is concerned, I am a little disappointed in myself. I completed the Bronze challenge with both mules, but I have used both my holiday/roll-over weeks and I have done very little at all over the last couple of weeks. I really struggled with energy levels towards the end of the challenge, and with restrictions meaning we could no longer go out on a jolly, plus the usual bi-monthly workload increase as the magazine is readied for publishing, I’ve been lazy and allowed myself to fall back on my carefully reserved ‘off’ weeks.

I also didn’t really achieve either of the goals I set out to achieve. Well: technically, I didn’t set goals. I thought of things I’d like to be doing by the end of the challenge, but I didn’t set them in stone.

With Marty, I wanted to have him wearing his breeching by now so that we were ready to start wearing it out and about and begin to build up our hiking mileage, ready for our first overnighters and multi-day treks this summer. I did successfully introduce his ‘baby breeching’ – a simple rope round the quarters, attached to a surcingle – but we didn’t get any further than that as I abandoned schooling sessions in favour of hikes.

With Xato, I had a vague idea that it would be nice to be confident enough in the saddle that I could enter an online dressage test with him. In other words, I had to be able to trot him further than one side of the arena! We did not manage this, but on the other hand we achieved something entirely different: I not only started leading him out on in hand walks myself, but we started doing them solo – AND I rode him out for the first time since we moved here. All the work we did during the previous weeks of the challenge paid off and I think Xato feels more secure with me than he did before. I had been looking forward to getting out and about with him like I do with Marty, since I think that will be the key to helping him loose weight, but alas…! Bigger Things Happened.

Special Mention Goes To…
I am particularly impressed with Ben and Joey, who also completed the Bronze challenge – except they did it without taking a single week off, despite Joey being lame for a few weeks at the start and Ben having a daily 2 hour commute to the office for a couple of weeks, too. This was excellent dedication from Ben and good for little Joey, who only came to us in November and had just been in a field eating grass and getting fat for the past three years! 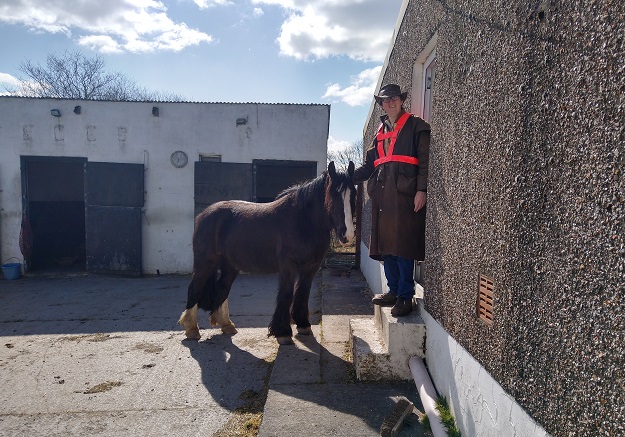 Week Twelve was Xato’s holiday week and Marty’s rollover week, but we did a little bit here and there.

Number Of Sessions In Week Twelve 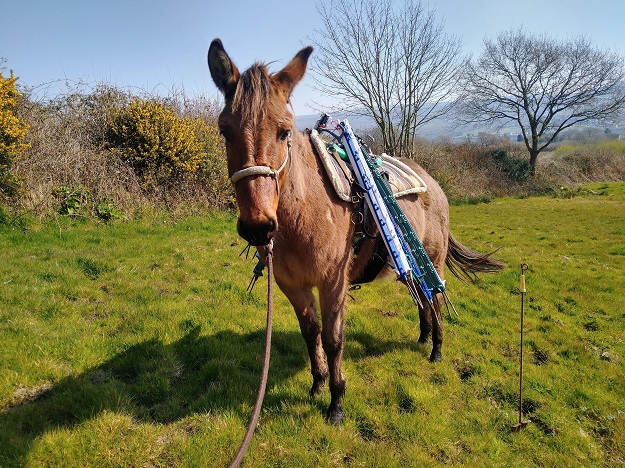 I finally got round to taking down and bringing in the fencing from the bottom field, which I’ve been putting off for a while now. I set it all up last year, carrying everything down in the big wheelbarrow we had, and it was an exhausting task so I wasn’t keen to take it all down again. This time, however, I used a Marty instead of a wheelbarrow and that made the job much easier!

Despite having done very little for the last couple of weeks, Marty was on fine form and didn’t bat an eyelid at being asked to head down the fields with his pack saddle on. He was less enamoured with the part of the job that involved us walking down the entire line of fencing, undoing tape as we went, since it meant he had to stop and wait every few strides. I wouldn’t let him eat which he thought was tiresome, but honestly he was very good about it once he understood the task and realised what the rules were.

On our way back up the field we pulled out fenceposts as we went, which I could do one-handed – tucking them under my other arm as we walked – while holding Marty’s rope in my free hand. Once eight posts were plucked we stopped and Marty was allowed to graze while I tied them into two bundles, then lay them either side of his saddle like a pair of legs. We then repeated the task, making our way back up the track and into the middle field where we dropped off our sixteen posts behind the well fence in the centre of the field.

We went back for another sixteen, the last load of posts, and took them up to where we’d left the others as well.

We then went back down the field a third time, where Marty was allowed a nice long graze while I pulled in tape and rolled it up, hanging the reels from his saddle.

I could have asked him to carry all the posts and the tape in one go, which would have been quicker, but I felt there was more training benefit to be had from a back-and-forth type job.

Took Xato up to the arena and did some work leading from his left, behind his shoulder, while Ben filmed us. Anna Bonnage (who Marty went to school with back in 2016) is now offering online video lessons, and I was keen to get her insight into why we were still struggling with Xato’s one-sidedness and his reluctance to allow people behind him.

I also lunged him, since the last time Anna saw Xato was at the Joe Wolter clinic in 2017 when we couldn’t even ask Xato to trot on a circle without him getting bothered and bolting. Thanks to Joe’s help and Ben’s work I can now trot and canter him on the lunge, as well as in hand, but although he no longer feels the need to bolt I don’t think he feels good about it. He puts his ears back and often ‘launches’ himself forward when asked to go up a gear, and I don’t like to see that expression.

We only have a half-hour session booked (which includes a 5 minute video), so I’ve decided just to send the first one to Anna for now. Our ‘lesson’ is on Monday so hopefully I’ll be able to update you on how that went next week. 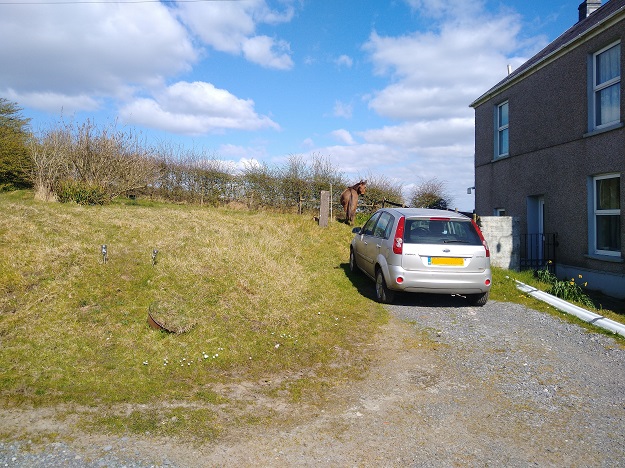 Ben took Joey up the hill and back to stretch his legs, and unfortunately he didn’t bolt the side gate properly behind him…!

Marty snuck out and was happily grazing on the lawn when Ben came back, and fortunately I was able to approach and halter him with no issue. I had been working in the dining room so had been blissfully unaware of my mule’s escapades. Fortunately, for whatever reason, Xato did not follow Marty out and stayed on the yard with Cash! I think it would have been a different story if Xato had got out, judging by his escape last year.

“Sorry officer, I know we’re on lockdown, but unfortunately our mule has gone gallivanting off…”

Since he’d been such a good boy, I allowed him to continue grazing for a while after being haltered. He was very happy about this.