A reasonable week this week. I struggled a little for time since I’ve got a lot of work on at the moment and a deadline looming, plus the mules had massages this week (sadly, holding a mule for a two hour massage session does not count!) and their Hen Night put things out of whack somewhat. Next week will also be a tricky one, and then after that there’ll be some breathing space.

Number Of Sessions In Week Three 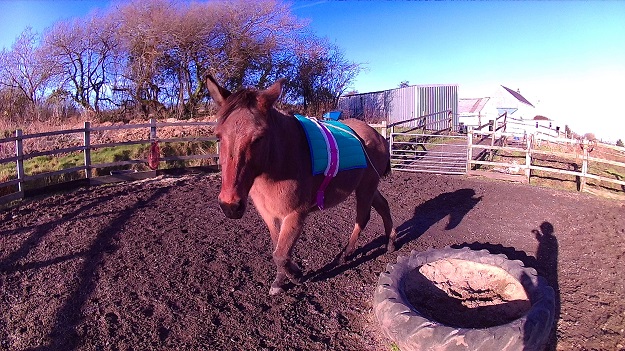 Twenty minutes with Xato and thirty minutes with Marty, both in the round pen. With Xato, I was working on an exercise Kate Sandel suggested to help with his one-sidedness and I also revisited ‘walking while touching Xato’s right hip’. With Marty, my intention had been to work on his breeching, but I started his session by doing the same things I’d been doing with Xato and Marty did not approve. There was a lot of running around (from him!). Eventually we figured it out together, and then I did about 10 minutes with the butt rope and him wearing it attached as breeching. He also trotted with it for the first time.

I had planned to take Marty for a walk today, but when I led him up to the yard from where he’d been snoozing in the round pen, he started breathing really heavily and really fast. His nostrils were huge and perfectly round, like a racehorse. I was pretty alarmed! I took some video to show the vets, who were already on their way to visit Joey – talk about good timing. They arrived a few minutes later and by then Marty’s breathing had calmed down a lot. He’d taken a big breath then blown out/snorted, and he did this another two times with a few minutes gap in between each one. These seemed to ‘reset’ his breathing. Lisa, the vet, listened to his belly, chest and throat and could find nothing amiss, so I’m to monitor him and let them know if it happens again.

Having asked around, it seems like it may have been something to do with temperature regulation. The yard is always a degree or so warmer than anywhere else, since the three white walls catch and hold the heat from the rising sun.

Once Joey’s x-rays had been taken (we were worried about his lame foot, but it seems like something we can probably fix through trimming. He was, I think, a victim of benign neglect before he came to us), Ben took him up to do a little mounting prep in the arena and I rode Xato at the same time. In my last ridden session with Xato, we played the ‘guided passenger’ game where the aim was to convince Xato that veering off towards his buddy the whole time was not a good deal. In this session, he lunged beautifully on both reins in the top half of the arena without pulling towards Joey, and although he fell in towards Joey twice while under saddle, he then changed his mind and took me off for a beautiful ride around the top half of the arena. He even stayed on the rail instead of veering off, which is his usual habit.

Also! As a personal achievement, I let go of the reins entirely and rode hands-free. It was only a month or so ago that I was too afraid to ride in the arena at all, let alone with no hands on the reins.

After I’d ridden Xato, I decided to take Marty down to the round pen and work on breeching again. That way, I figured that if his breathing started up again I could stop immediately. We revisited the same exercise as last time, and this time he was a little better with it. He was fine with the rope breeching and today I introduced his proper, leather breeching for the first time. I was able to get him to the point where I could sit it in position on his butt and walk him while I held it in place, but I didn’t attach it to anything today. His breathing was fine throughout the forty minute session. 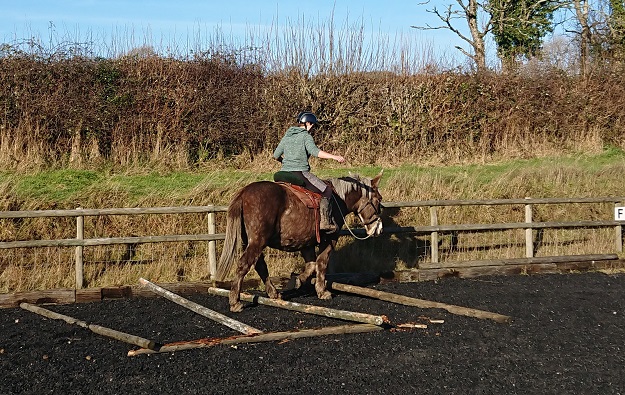 I took Marty out for a 5 mile circuit, with the aim of visiting a bridge in a nearby village – just because we could, really. He was a very good boy and we had the opportunity to work on our ditch issue from last week! Even with me standing six foot from the ditch, it still worried him so badly that he couldn’t walk between it and me without barging into me to get away from it. Marty has always been extremely polite about personal space so I knew the ditch had to be worrying him very badly. Although I sympathise, that kind of behaviour is dangerous – especially for us and the miles we do. I popped him on his panniers with the end of my rope whenever he made to drop his shoulder on me, which had the desired effect and he paid more attention to where he was putting his feet. I broke it down into tiny steps and eventually I was able to get him to walk between the ditch and I without bumping me, though we are still a very long way from being able to stand him alongside it.

His best boy moment came towards the end of the walk, however, when the lane ahead was blocked by several fallen trees. The nearest one could be lifted and held while Marty went on ahead, but the others were laying across the road and I think Marty felt like he didn’t have space to go forward or that he might be trapped if he did. Luckily, the very kind man who was taking down the trees came down the bank and moved everything for us. I think we would have got through eventually without help, but might have taken a while!

When I got back I didn’t really feel like working Xato as well, but I made myself take him down to the round pen for some more work on leading from his right hip. He did this pretty well straight away, so I moved the goalposts slightly and asked him to do it in trot. He could go up into trot and come down again while I was walking at his left hip, but at his right hip he just kept running so I put his halter back on as we were achieving nothing without. With this, I was able to work on it until eventually, with my hands free and the rope over his back, he could go up into trot when asked, come back down to walk when asked, and stop when asked without trying to turn round and put me back in both eyes. 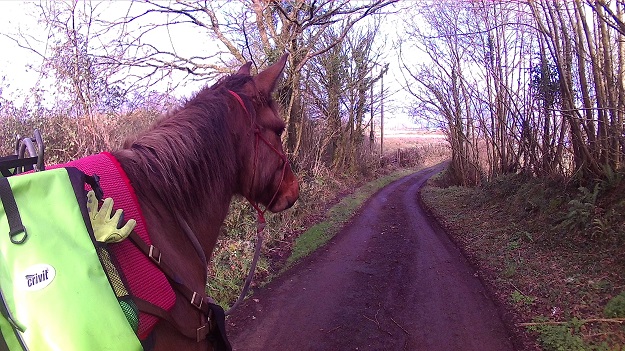 On Wednesday night, when I went to put everyone into the field, I discovered that they’d got into the chicken food and so we spent a very fraught night checking on them every few hours to ice feet and watch for signs of colic. As such, I was useless today and did not do any work with either of them.

…Until shortly before midnight, when I went out to do last checks (they’ve been restricted to the yard for 48 hours due to the laminitis risk) and decided I’d see how Xato felt about wearing fairy lights. As expected, he couldn’t care less but it gave me another 15 minutes towards his hours.

The mules had their massage from NP Equine & Canine Physical Therapies today, so I had planned for it to be their day off. However, they’ll be on light groundwork only for the next couple of days (I did tell them that before turning them out to hoon around and smash each other in the field), and as I still had an hour to complete for Xato I thought I’d get up early and work him before his treatment. We did twenty minutes in the round pen that incorporated me mucking out while he walked on line behind, since he’s decided that the wheelbarrow and mucking out tools are scary, and practising taking his halter off while I’m sitting down.

I then did ten minutes on asking him to walk faster rather than trot. Xato believes he only has ‘slow plod’ and ‘grudging trot’ and nothing in between, which makes his transitions kinda ugly for everyone involved. I was interested to note that he found it much easier to do a fast walk on the right rein; I figured this was because he’s more bothered by me on his right, and as it’s his tendency to resist-resist-resist-suddenly-go when he’s bothered, I thought that might be why he was able to stretch out his walk. He was accidentally doing what I was asking him to do.

Nerys, who treated him, explained that trotting is actually easier for them to do than walk. Xato’s reluctance to walk out nicely may well have been due to physical limitation, since he had some tight muscles in his neck and groin again and his pelvis is not very mobile. My feeling is that it’s a mixture of physical and emotional discomfort since the two can feed off each other.

Day off for the mules, apart from this week’s plus challenge which was to groom or touch our equine all over, out in the open, at liberty. These plus challenges are fun because they never go how I expect them to. For example, I pretty much always groom Xato while he’s loose and it’s never been a problem, whereas Marty isn’t so keen on it. But Xato was in an antsy mood today and didn’t want to stand still, and Marty was perfect. Maybe one week we’ll ALL be good at a challenge.

Although grooming doesn’t usually count towards hours, because this was part of the plus challenge I banked another 5 minutes for Marty and 15 minutes for Xato (I did some work with him before the camera starts recording).

An hour in the round pen and on the yard with Xato. In the round pen, we started by having him follow behind while I skipped out again – my theory is that having him follow the ‘scary’ wheelbarrow may help to make it less of a threat – and then I put the rope breeching on him with Marty’s surcingle. When Nerys treated them on Friday, she said that Marty’s bum muscles had improved and we think it’s probably because of the breeching work I’ve been doing with him. Having something like a rope sit around the hindquarters increases the equine’s proprioception, meaning that they think about that area of their body a little more. As Xato also has a weeny butt I asked if it would be useful for him and Nerys agreed, although I shouldn’t overdo it; two or three sessions a week, maybe.

I also did some work on asking him to line up on me while I stood on the tyre, and again while I sat on the gate, right and left sides. As expected Xato struggled more with his right, especially while I was on the gate, but he tried very hard.

Back on the yard, I practised asking him to put his foot forward onto a tree stump to try and recreate the hoofjack the trimmer would use. He was very good with his right fore, not so good with his left. 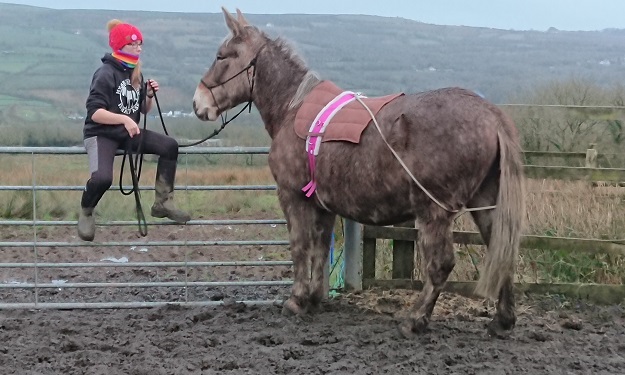