We are now halfway through the challenge, which also means we’re halfway through what is probably a very boring run of blogs. Ah well. Someone might get something out of it, and I enjoy chronicling our progress, so it’s worth the effort.

Despite Storm Ciera battering us on Monday and Tuesday, and Storm Dennis rolling in from Friday onwards, and me getting a nail through my foot at the start of the week, we actually did pretty well. My only disappointment was that I’d planned to take Marty to the monthly Saturday morning market in the village, but Storm Dennis stopped play.

My two real wins of the week were riding AND leading Xato off property, for the first time since we moved here. I think the one-on-one work I’ve been doing with him for the last six weeks has really helped how he feels about me in terms of someone who can look after him.

Number Of Sessions In Week Six

I’ve been aiming to work both mules every Monday as a personal challenge, but today was off to a tricky start since I made myself sick by accidentally drinking milk due to a tea mix up, and then stepped on a nail which went straight into my foot. The day was further complicated by the strongest winds so far and intermittent, heavy hail showers.

It was too wet to do Xato’s traditional Monday walk round the bottom field, so we went up to the arena to pick up where we left off last week. He still felt the need to run rather than simply walk on my right, but this time he didn’t try to put me on his left and actually ended up trotting round me on a smaller circle as though he were being lunged. This was fine at first until I realised he wasn’t really paying attention to me; he would occasionally turn an ear in my direction, but otherwise he had just found a comfortable spot where he could jog round and round without exerting any real energy and without needing to think about trying something different.

To prompt him into trying something else, I asked him to engage with me more by upping the energy and changing his direction at regular intervals. Just like last week, we eventually found a place where he just let go, came to a stop, and walk beside me to collect his halter (which had been left in a different area of the arena to last time). In fact, what specifically happened was when he’d finally come down to a stop and I’d been able to move in and rub on his right side, I walked away from him – with the idea of just giving him some space to think – and he came with me. Because I was just walking and wasn’t asking him to do anything, he could be comfortable on my left.

For me, the overwhelming lesson from this hour long session was that asking him to stop at liberty was often the catalyst that caused him to bolt; a little like how taking hold of both reins on a bolting horse is liable to exacerbate the problem, I think he found the request to whoa – no matter how quiet – deeply troubling and claustrophobic. This was an important discovery and something to work on.

I then did 10 minutes with Marty where we revisited our backing into a stable. He did it right away this time, but we persisted until he was able to do it smoothly – he kept trying to stand on the concrete ‘lip’ and making a real meal of it. He’s a mule and he is more than capable of not falling over his own feet so we improved on this. Once we had it good, I unhaltered him in the stable then backed out and drew him after me. From there, I asked him to walk backwards into the stable again at liberty, and he did it perfectly.

The mules are fed in their stables so after they’d had dinner, and both had done their usual routine of waiting patiently in the doorway after the doors had been opened, I drew Xato out then asked him to reverse in again (at liberty). He did this brilliantly right away, despite the fact that his stable was arguably harder than Marty’s since he had to step up rather than over, his belly is much wider, and I’d never asked him to do this before even with a halter on. Marty may be the golden child these days but he doesn’t have Xato’s natural talent for just doing things! Marty desperately wanted to be involved so I did another 5 minutes of backing in and out at liberty with him, too. 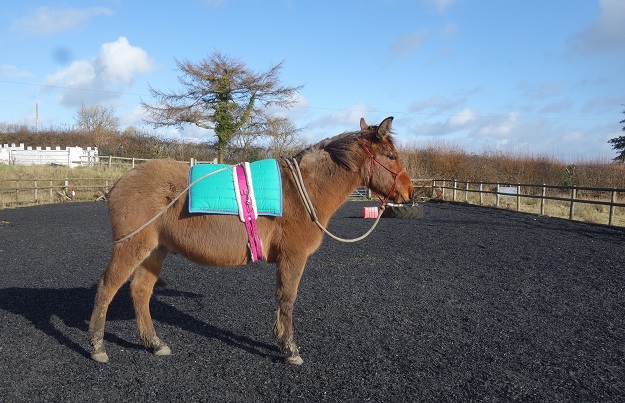 Ten minutes with both mules after breakfast, working on backing them into their stables for the plus challenge, followed by 45 minutes in the arena with Xato and an hour and 5 minutes with Marty.

With Xato I did most of the same things as yesterday, but today – when I took his halter off, gave it to Ben to put in a random area of the arena, and asked Xato to walk with me on my left – HE BLOODY DID IT! Amazing!

Marty did much the same things as Xato, only he wore his practice rope breeching while he did it. He also went for a stroll down the lane.

Marty and I spent an hour litter picking the lower half of the lane (we don’t usually go that way so it hadn’t been done in a while) and met up with Ben who was cycling back from the garage.

I then rode Xato in the arena with Ben, before riding him off property for the first time (my first time, not his)! We only went to the end of the lane and back; I felt like I could ride further, and Xato certainly wanted to go further, but Ben sensibly pointed out that it was better for both of us if we turned back while it was good. It would probably have been fine to go further, but would have been a shame for something to ruin it and shake my confidence or Xato’s. This way, we had good feeling in the bank. An hour and ten minutes total.

Half an hour for both boys: first we filmed week five’s plus challenge, which was to back into a stable, and then I took them up to the arena together to film this week’s plus challenge – which is ground-tying for a full minute. I want to film them doing it solo as well, so that challenge video will be posted next week.

Battered by Storm Dennis all day. Did 10 minutes each in the stable with them, asking the mules to practice bringing their forelegs forward and onto a block (as an imitation hoof stand). 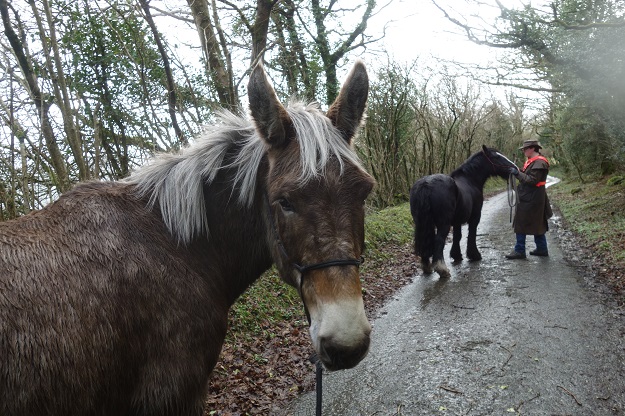 The day started awful, but by the afternoon we actually had blue skies – and 40mph winds, but at least it was no longer raining. The sunshine made me want to ride until I stepped outside and realised how strong the wind was! Ben suggested taking Xato and Joey for a walk up the hill instead. I didn’t want to and was going to take Marty, since I was worried about Xato running away, but Ben said he was confident Xato would be fine with me. He also pointed out that if I was going to ride my mule, I should be able to lead him. If I can’t lead him, I shouldn’t be riding him. This was very true.

For some reason, leading out was scarier than riding out – I think because if he bolted while I was on his back, I would have a longer window of opportunity to stop or turn him; whereas if he got scared and ran while I was on the ground, then I only had that one chance to hold him. I was so scared that my chest started hurting before we’d even got to the end of the lane! It’s so ridiculous when I will happily walk for three hours or more with Marty and not think twice about it.

Anyway, Xato was absolutely fine and enjoyed his stroll. Ben has led and ridden him out numerous times without issue, but as with Thursday’s ride, this was my first ever time leading Xato out since we moved here.