Well, Marty was definitely the overachiever this week since he did 10 hours when he was only required to do 3.

I’ve been feeling a bit awkward about our hours, to be honest, since Marty has gone way over the time required on a few occasions during this challenge. I worry that it looks like I’m ‘cheating’ by deliberately choosing a level well below our usual standard, which isn’t the case. I  chose Bronze for both mules because it was achievable, but only if I put the effort in. I certainly wasn’t doing 3 hours with each of them per week before the challenge started.

Silver (5 hours) with Marty and Bronze with Xato was a possibility, but it would have been hard-going to meet that goal with him every week and I didn’t want to turn my mule time into something that caused stress or made me feel bad.

Three hours each is enough to be useful in terms of the mules’ progress, enough to make me work a little harder than I might usually in order to fit time in, but not so much that I’m struggling to get everything done.

Number Of Sessions In Week Nine

There was good weather today, so Marty and I played hooky and went off on a big 10 mile trek over Dead Dog Hill way (almost none of these back lanes we walk on have names, so I’ve had to make my own to explain to Ben where I’m going / where I’ve been. This is one of the many reasons I use the What3words app!). It was a beautiful day and Marty was a pleasure to walk with. During our lunch break I was able to walk some distance from him without him bothering, and this meant I could hop the fence and have a wee out of sight in the woodland. Weird mule packer goals, I know.

When we got back, I took Xato for a walk in hand by myself OFF PROPERTY for the first time ever. I don’t know what came over me. If you read last week’s post, you’ll have seen that on Sunday I was too scared to do anything with Xato even with Ben and Joey on hand. I think it was because I had such a good walk with Marty, and I was able to hold that feeling and project it onto me and Xato. We only went as far as the farmyard at the end of the droveway, where I let him graze for a few minutes before turning back, but that’s still a 10 minute walk each way. He was completely mellow about the whole experience.

The herd had their feet done in the morning, so that took up most of the day.

Afterwards I took Xato out again today, and this time we went slightly further – walking down the droveway to the farmyard, then down the farm driveway to the road. I let Xato graze in a gateway here before bringing him home again. My vague plan is to gradually increase the distance each time, to stretch our comfort zone and build confidence for both of us. I’m winging it somewhat, but I feel like hand-grazing him at each turning point will a) help him feel at ease and b) give him a purpose to the walk. Walking somewhere then turning 180 and going back again is pretty boring, and mules like to have a reason for doing something.

When we got back home, I turned him loose in the arena for a roll but he was more interested in eating so we did a little liberty work before taking him back to the yard.

I took Marty up to the arena for a roll, did a few minutes liberty work, then handgrazed him.

Marty and I did our weekly trip to the recycling centre and back. We didn’t litter-pick as usual on the way home, as a loose dog came chasing after us at the top of the hill and although Marty was exemplary it was a bit of a mess to extricate ourselves from. The dog’s owner was walking two other dogs as well and I didn’t know if they would be continuing down the hill, so to avoid them coming upon us again, we just went straight home. Litter-picking is slow work. I was really proud of Marty because he used to have a really extreme dog phobia, and although I’ve known he’s better for a while, it was nice to have that proof.  We were surrounded by loose dogs at one point and he just started grazing!

Then I took Xato out, extending our distance once again by taking him down the droveway route, onto the road, and down to the corner this time before turning back. As we were approaching the corner he noticed a calf in the field next to us, which he pointed ears at then quickly forgot, but a few strides on he noticed a big white cow lying down with her back to us. This alarmed him and he got very tall, but I just did the same things I used to do with Marty way back when (asking him to lower his head, tipping his nose from side to side so that he could see his exits, etc.). Then I walked him on to a gateway a few metres further down the road so he could see the cow properly without having to peer through the hedge at it. He stared at it, took a step closer, stared at it a bit more, then realised his hooves were on grass and had a cheeky graze. Not so bad after all!

I was pretty proud of both of us. Last week, when bringing him down the driveway between arena and yard, he’d spooked at something in the hedge and made to turn away, back up the drive and towards the open road. I didn’t panic or grab for him, which I’d like to say was deliberate, but actually I simply wasn’t paying attention and didn’t really register what was happening. I was actually thinking about Marty so I responded how I would with him! For once this actually worked out, because me not immediately shutting down Xato’s movement helped him feel safer and he came back down and forgot about his worry with very little effort. That was a real wake-up moment for me and is a feeling I’ve been trying to imbue us with all week. 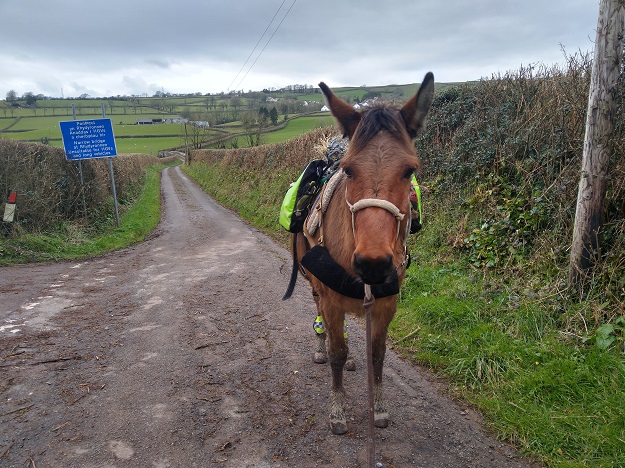 A rather epic 12 mile trek. On Monday’s hike I’d thought about crossing the river and looping home that way, but when I checked the map it seemed we had to travel down a section of busy road. After getting home and looking on Google Earth I was able to see that although it was busy, it went through a village so there were speed limits (in fact, on the day there was even a nice chap standing on the bridge in the middle of the village recording people’s speed, so drivers were extra polite!).

I hadn’t checked how far it was and didn’t expect to be out as long as we were, and I didn’t realise how long it had been until we got home and I looked at the time. Our fitness levels must be pretty good as neither of us were bothered by the distance!

On the way back we found the road blocked by some workmen who were replacing a telegraph pole. We were only a couple miles from home at this point and going back down the hill and round would have added another 4 or 5 miles to our total, so I opted to stay put and let Marty graze while we waited. Unfortunately the “ten minutes” I was quoted turned into 35 minutes, and it also started to rain heavily – I was only wearing a hoodie and hi vis gillet, since it had been so warm when we set out. Oh well! Lesson learned: if you have a pack mule, pack some waterproofs.

I was too ill to do anything today, having apparently caught a chill due to yesterday’s hold-up. So I was weak and pathetic and only did the basic care, spending the rest of the day in bed. 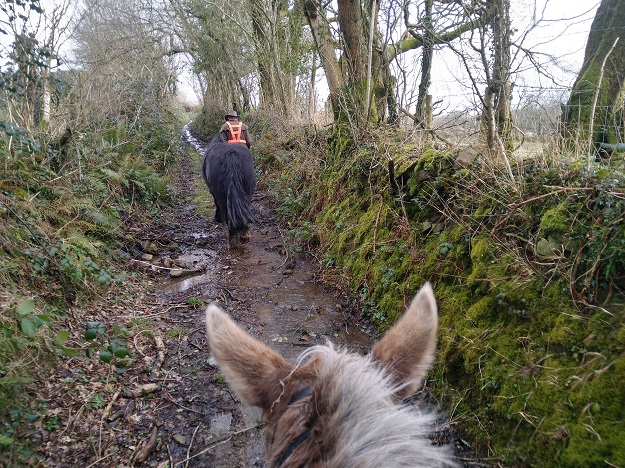 Rode Xato down the droveway and down to the road and back, with Ben and Joey on foot. Xato had to have a little reminder session in the arena first, since he saw Ben open the gate and decided he absolutely HAD to go through it right now and OMG how could he just stand here with an open gate in front of him?! But we did it, I backed him up every time he moved off without being asked, and when I did ask him forward he was able to halt nicely and wait within the gateway itself.

He was fine out on the hack itself. Last time I rode him out, he did his “posterior checks” all the way down the lane and half the way down the droveway, but this time he only did them for the first few strides and had settled before we’d got halfway to the neighbours (“posterior checks” are a brief way of describing this habit of his where he swings his head to the right – what I assume is him checking behind him out of his right eye – and then doing the same thing on his left, then right, then left, and so on. He never does this in hand and he never does it when ridden in the arena. I don’t think he’s ever done it with Ben while riding out, but he’s done it with me a handful of times now).

Marty has his picture in Horse & Hound this week, which was a nice surprise as I thought they were only running a website article on him. You can read the online article here. Although I love running this blog and its corresponding social media platforms, I would not normally have reached out to the press since I don’t think anything we’ve done has been particularly newsworthy. However, journalists from the Daily Mail contacted me a few weeks ago as they’d seen photos of Marty doing his litter-picking duties and wanted to feature him. I did not want to be associated with that paper in any way, shape or form, but I did recognise the opportunity to promote mules, so that forced my hand and I contacted a few other publications instead. 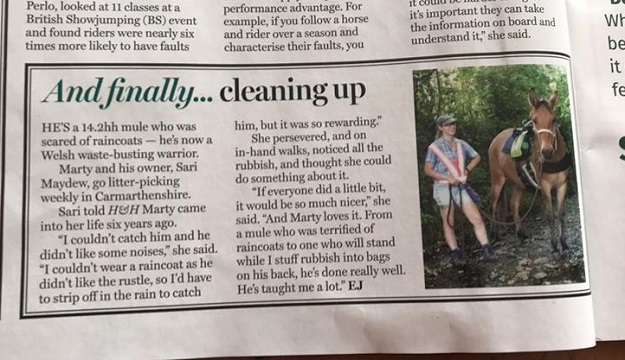