Yep … I’m still blogging about the 12 week challenge! We’re a third of the way through now, so if my rambles about training aren’t your thing then I recommend checking back here in 8 weeks when I’ll return to posting more quality content such as what happened when I tried to force an AI to turn my post-apocalyptic zombie game into a quest for mules (spoiler: it did not go well).

This week was a tricksy one because I was super busy finalising everything for the February/March release of Horsemanship Magazine. By Saturday I’d only logged 30 minutes with Marty and an hour fifty with Xato, and I was seriously tempted to take this as a rollover week for at least one of them (the challenge allows you to take one holiday week and one rollover week; the latter requires you to make up your missed hours, the former doesn’t).

I did make my hours, but I feel like I cheated a little since I did all of Marty’s remaining hours in one go. This is allowed, but what I like about the challenge is that it inspires you to work with your equine on a regular basis. I feel like doing short, daily sessions – I only need to do half an hour a day with each mule, six days a week, to hit my three hour goal – are far more beneficial than doing half an hour on Monday, nothing all week, and then 2.5 hours on Saturday.

On the other hand: at least I did something! I may not have if not for the challenge.

Number Of Sessions In Week Four

Both mules went out for a walk (separately), and both did a little practice with placing their feet onto a tree stump to simulate the trimmer’s hoof jack. They had their hooves trimmed that afternoon and were very well-behaved! Marty’s walk took him down the lane and back, and Xato’s involved him doing a circuit of the bottom field since I don’t trust him out in the wide world unfortunately. Unlike Marty, he’s more of a ‘leave first, ask questions later’ kind of guy. He was on alert but very good and I had no issues leading him.

Didn’t work either of them. I had a lot of work to do and, as Ben had gone into the office today, I figured I’d catch up on other jobs instead.

One hour twenty minutes in hand with Xato in the arena today. We mostly noodled around: tried some new pole configurations, practiced our ground tying, worked on getting him to soften and back up (he started out very resistant), walked around, and then I threw myself onto the floor and played dead to see what he’d do. He touched my legs a bit, looked like he was thinking about rolling or lying down as well, then stood quietly and waited for me to stop being weird. I was impressed, since we’d finished the session and had been walking down towards the gate where Ben and Joey were already waiting. I fully expected him to keep going and hang out with his buddy instead.

No work done with Marty. 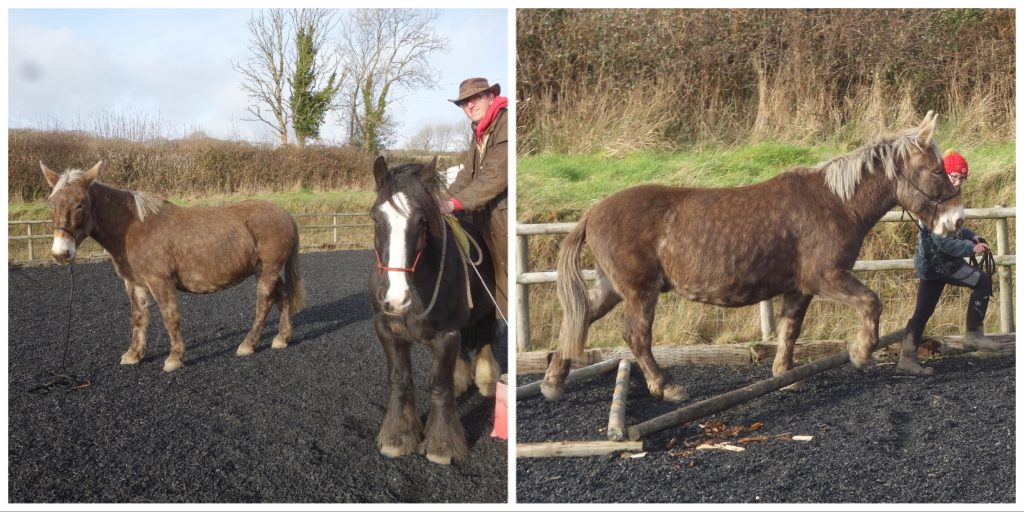 Didn’t work either of them. Had a deadline to hit!

Again – no work for mules today!

2.5 hour, 7 mile hike with Marty (plus some handgrazing at the end). Ben came along on foot which meant I was brave enough to try a new route that involved a busy road and some slight law-breaking.

Basically, there’s supposed to be a nice bridleway around our local racecourse but we’ve not actually been there yet. On our way there we passed a right of way which the OS Map said was a footpath; it crossed the golf course, went through some woods, and then came out directly opposite the bridleway we were aiming for. It seemed like it would save us some roadwork so we went for it – we were all on foot, after all.

Marty has never seen a golf course before and he grew to about twenty hands high when we emerged from a thicket and spotted a group of golfers with their caddies. I don’t know whether it was their clubs, or their caddies, or what it was about them; but Marty thought they were highly suspicious and he had to walk very tall for some time. We were very careful about sticking exactly to the path – no cutting corners – and nobody told us off or seemed cross to see us, even when we passed right by the clubhouse. We went over a narrow bridge into the woods but here, unfortunately, our trail ended as we were faced with a kissing gate a few yards further on. This was disappointing, but at least we only had to turn round, go back to the clubhouse, and out through the car park. We then navigated a short stretch of busy road before finding another footpath which took us back onto the road we’d originally been on when we joined the golf course path. It was a nice circuit loop even if we didn’t go where we’d intended to.

It also occurs to me that we met a bus while we were waiting to cross over from the golf course, and I’m not sure Marty has met one of those before either. I didn’t even think about it at the time. I suppose, since he’s fine with lorries and all kinds of farm machinery, a bus probably wasn’t going to worry him.

By the time we got back I was knackered and had a headache brewing, so I really didn’t want to work Xato as well … but Ben was taking Joey up to the arena, and I realised I had to do the same if I wanted to make Xato’s hours for the week.

My plan, to be honest, was just to walk around the arena until Ben had finished with Joey; Xato seemed pretty grumpy about life and like I say, my head hurt. But I began to realise that Xato had some energy in him but wasn’t being anxious with it. This was a big deal and not an opportunity to miss, so I started doing some rollbacks with him, then halt-trot-halt transitions. He was super good and every time we stopped for some soak time he yawned eight or nine times and did lots of licking of his lips and my hand. It didn’t feel like a stressful lick and chew, i.e. one that happens because they’ve got a bit bothered, but rather one that was pure processing. He had a super peaceful vibe about him the whole time he was doing it which was really nice to sit with.

The plus challenge for this week is to either 1) lead our equines from both sides or 2) mount and dismount from both sides. It had been my intention to do both with both, but even though I do everything from both sides as standard – including mounting – Xato has regressed with that lately. I worked on it last week with some success, but when I tried to line him up on the block today he just wasn’t having it. On the third try he managed it, so I gave him a treat – just because I wanted to make a really big deal about how clever and good that was – and he accidentally bit my finger. I cried, “Ouch!” without thinking and Xato thought, “Shit! I’m in trouble!” and that was it. I could not get him to stand level with the block on his right while I was standing on it.

Eventually, thanks to Ben’s help, we realised we could put him in position from his left, then walk around, stand on the block, and rub on his back and sides. He was absolutely fine with it done this way. In fact, I was even able to ground tie him in that position and walk around him in both directions, climbing up and over the mounting block as I did so, and he stood by happily the whole time. Mules are so specific in their thinking and, man, it can be hard to think the way they do.

Obviously I will continue to work on this until I can ask him to come up to the block when I’m on his right, just as he’s able to do when I’m on his left, but I don’t consider today’s attempt to be cheating. Previously, he was getting more and more concerned and all that was doing was re-enforcing his idea that having me on his right is A Bad Deal. By finding an easier route to show him the place I needed him to be, I was instead able to re-enforce the idea that having me above him and on his right is super peaceful and nice.

I didn’t get on him because I felt like that was a good place to be for now, and asking more of him when it wasn’t necessary would likely sour it. We have the entire challenge to complete the plus challenges, so there’s no deadline here.

Some other really good things that came out of what turned out to be an hour and a half session: 1) Not only was I able to ask him to canter on a circle with a gentle upward and downward transition for the first time, but I did it while on his right 2) There were two instances while asking him to put more energy into trot where his cup overfilled and he thought he might have to leave – the head came up and round, the shoulders dropped, the whole familiar shape – and instead he disengaged himself and came back down.

I should have done the getting-on-and-off-from-both-sides with Marty, too, but I did not. Marty had another day off. I will aim to be more consistent next week with him. 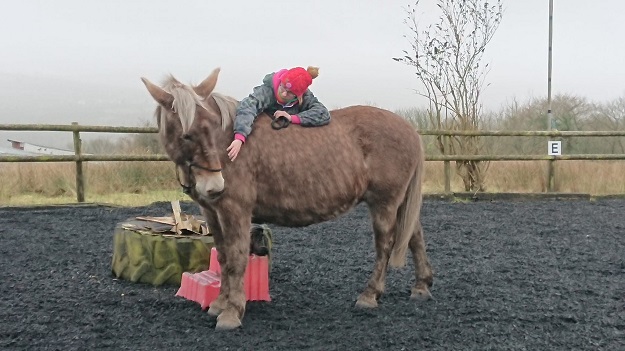