These last couple of weeks have been pretty poor in terms of hours, as I’ve struggled with energy levels.

I had planned to take Week Ten off as my allotted holiday week, because by Monday I was still feeling pretty wiped out from my illness over the weekend; also, the weather was not in any way motivating. I hate to say it but it was a rather pleasant week where I had much more energy than usual! Normally it’s a drag to work both mules and then complete yard chores.

However, on Saturday Ben said he was taking Joey for a walk so Xato and I elected to go with them. That gave us an hour and a half. We then we did another hour and a half walk on Sunday, meaning that Xato completed his tenth week and both his holiday and rollover weeks remained intact.

Week Eleven started off well, with a 2 hour walk for Marty and a 45 minute walk for Xato, but I was unable to keep it up and in the end Marty just scraped by to complete his tenth week and Xato used his rollover.

Number Of Sessions In Week Ten 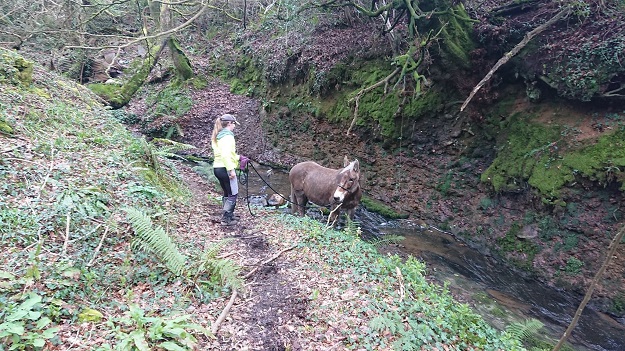 A four mile walk in-hand with Xato, Joey and Ben for company. He got a little bothered over some camo-style netting on a fence on the other side of a hedge, but after boggling at it for a bit he quickly settled down. When we passed the stream that Marty and I sometimes play in, I decided to have a go with Xato as well – I’ve not been brave enough before, but our communication has improved. It filled his cup a little bit as he thought about setting his neck, going straight, and just walking off to wherever the mothership told him as we climbed out of the hollow; but I asked him to check back in with me, he did, and we had no incidents. 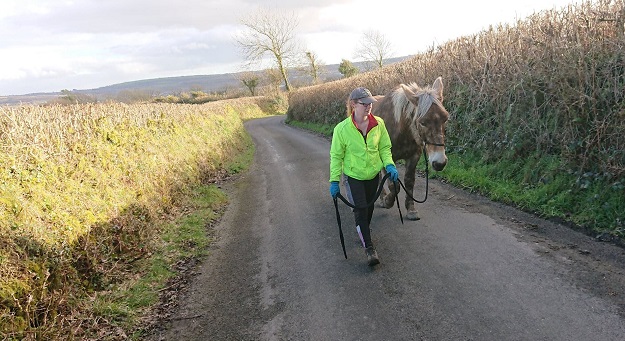 Another four mile hike for Xato, except this time it was just him and the humans. This is the first time we’ve taken him out without an equine companion since we moved here, and I led him all the way since my hours wouldn’t count otherwise. He was very good but I was ESPECIALLY proud of him when we crossed over the first bridge; there were kids and a dog playing and shouting in the water and under the bridge itself, as well as an adult shouting on the bank. Xato walked past no problem, but then got a bit worried once his back was to them since the man on the bank started shouting again. But other than a raised head, and him needing to look back at the noise out of his right eye and his left eye, he handled it really well.

I also recorded their week nine and ten plus challenges.

Number Of Sessions In Week Eleven

I took Marty for a short 4.5 mile hike, which he was very pleased about. He was very enthusiastic to be out and it was lovely to see how happy he was! We only had one issue which was when we encountered a car on a narrow stretch of road.

There was a grassy corner we could pull over on, but it was full of deep tire marks filled with water; the second half was track-free, but still soft underfoot, and I wasn’t sure if Marty would object. However, he walked onto it quite happily, stood patiently while the car passed, then moved smoothly on when I asked him to. We’d just got all four feet back on tarmac when another car came up the hill behind us, and since it was quite a way to the next passing place we turned around and went back to the grassy corner.

Would Marty stand on it again? Would he heck. He reacted the same way he’s been reacting when asked to stand near a ditch – dropping his shoulder and shoving me aside as he tries to squeeze through without touching the grass. I was baffled and more than a little bit annoyed because we’d literally just been standing on it and he’d had no qualms at all. It’s very embarrassing to have someone sat in their car, their route blocked, watching while you try to grapple with your apparently feral mule who clearly shouldn’t be out on the roads; and dealing with that embarrassment is something I need to master. Getting frustrated or acting on a time limit does not work with mules at all.

After making complete fools out of ourselves I eventually managed to get him to stand on the very limit of the grass, just enough so that the car could squeeze past us. I then set about working on the problem, and without the additional pressure of the car he very soon had both front feet on the grass. A few moments later and he was able to walk on the grass, but not stop on it; and then later still I was able to ask him to walk onto the grass and wait. He got a treat, we hung out, I took him off and asked again, and so on. Whether it will make any difference in the future is anyone’s guess.

After dropping Marty off at the yard, Xato and I went for a walk down the droveway and back then did a little work on line in the arena – just prompting him to stay in position beside me, since he loves to drop back and has to be regularly reminded – and then we checked out where we were with the mounting block. Much easier than last time, even with his back to the gate, though he still stepped his hindquarters slightly out the first time.

Once again, no work for mules. I had planned to do something since the weather was nice, but I was so tired when I got up that I just trundled outside, fed them their breakfast, opened up access to the field, and went back to sleep until mid-afternoon.

I filmed their week 11 plus challenge today, which required me to hold each of their feet up for one minute in turn. I knew I’d struggle physically with bending over for that long, particularly as I had done Marty’s heels, picked out and sprayed both boys’ feet, and put Artimud in Xato’s feet beforehand; so I sat down on a bucket while I held each foot which is obviously not health and safety compliant. I had planned to do four different ways with Xato – one foot held while sat down, one foot held up with a foot rope, one foot resting on a bucket, and a final method that I hadn’t come up with – but I couldn’t be arsed.

I did rest one of Xato’s hindfeet on the bucket, however, and after Marty had completed his attempt at the challenge I decided to do the same with him. This turned out to be a bad idea.

I started with a forefoot, which Marty was fine with but he removed his foot after about 30 seconds. I put the foot back on and he snatched it away, kicking the bucket backwards underneath him as he did so. He took fright and ran off, and I went to get his halter. I figured this was a good opportunity to work on it with him, since he often does the same thing with the hoof jack when our trimmer is visiting – he’ll keep his foot in place for so long, then decide he’s had enough and lazily pull away, knocking the stand over as he does so and freaking himself out. Long term readers may remember the difficulty we had with handling his feet at all in the very beginning, as he’d snatch the foot away and try to stamp it on the floor. Because his toes were very long at the time he would almost always knuckle over on impact, which frightened him. This turned into a vicious circle as he’d be afraid of knuckling over so would snatch his foot away sooner, and eventually it became so we couldn’t pick up his foot at all. We had to work very hard on it but we overcome this issue and feet handling has been consistently good for the past five years.

So anyway, he didn’t want me to pick up the foot at all so we worked on that. Then we approached the bucket again and I realised he didn’t like the sound of it moving on the floor, so I led him a few circuits of the yard: kicking the bucket along in front of me with him following after. He settled very quickly once he realised the scary thing moved away from him.

I reintroduced his foot to the bucket, though kept my hand on his hoof so that I could intervene if he decided to pull away. He managed this alright so I removed his hoof from the bucket; made a point of placing it forward on the floor instead of allowing him to pull his foot back, like he wanted to; gave him a treat and some thinking time.

We repeated this four or five times with no drama, so after another thinking break I decided to do the same thing with his other front foot and then call it a day. I assumed that since there was no trauma associated with that foot, and the foot that HAD had trauma was no longer a problem, that this would be fairly straight forward. Instead he was worse. Much worse.

He ran backwards around the yard, he tried to pull away, he sat down on the electric fence (which fortunately wasn’t live) and launched himself forward again, he went down into a bow whenever I did manage to pick his foot up … it was all a little excessive, I thought. We broke it right down so that I spent a lot of time just picking his foot up, putting it back down, picking it up, putting it down, etc. When he was able to do this I started doing the same process, but showing him where to place his foot when he put it down. We repeated this a lot, too. Eventually I reintroduced the bucket and did the same things as the other foot, again and again and again.

By this time he was much calmer, so I then had him eat some treats off the bucket itself then took him up to the arena for a roll. He was easy to catch again, we did a few easy circuits of the arena, then I hand-grazed him on the drive for a while before returning to the yard. Here I put his left foot on the bucket, removed it, had him place it exactly, then did the same process with his right foot. He was much happier by this point and seemed to have forgotten that he’d ever had a bad time.

The irony of it was I spent an entire hour working on this, so much longer spent doubled over than I would have if I’d just held all four feet normally and been done with it!

I had planned to do something, but by the time I’d finished grooming Xato I was wiped out so it was no work again for the mules.