I’m taking a holiday week from the Top Barn challenge, so here’s a short post about a very interesting mule I stumbled across last month (Twitter followers may have already seen this. I am not very consistent on that platform, but it is where I usually share the interesting tidbits from mule history that I come across).

This is Tishal, or Sans Pareil, a “blood mule” presented to Queen Victoria in 1843 by Captain Harris on behalf of the King of Shoa. She was docile, beautiful (“..Legs and ears are rather those of an antelope than a mule”, “Of the most exquisite symmetry”), and jet black in colour. 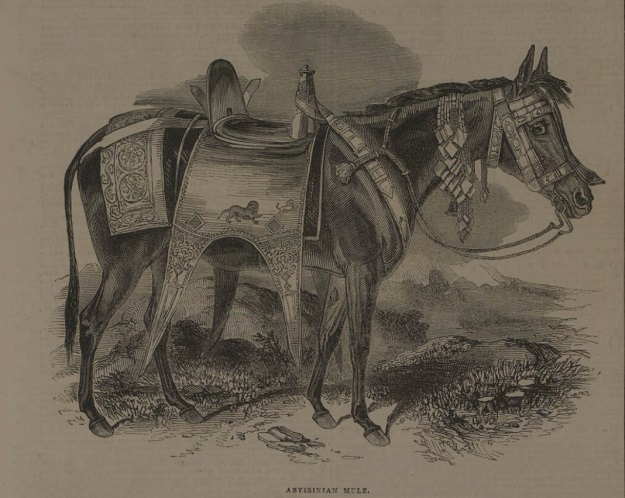 Referring to her as a “blood mule” is a curiosity, as a “blood horse” is a thoroughbred in the original sense – i.e. a purebred horse. Since it’s impossible (or at least, extremely unlikely) to have a purebred mule, perhaps the description simply means that she had all the qualities attributed to a purebred animal, or that her parents were purebreds themselves; her actual breeding is not mentioned.

The saddle cloth she was presented with – and which she is wearing in this exquisite illustration – is described as “scarlet & blue”, and the saddle is of “green and crimson” leather which, together with the lion of Ethiopia on it, pertain to “royalty alone” in her country of origin. The stirrups, hidden beneath the saddle skirt, are described as a “mere ring” big enough to “embrace the great toe of a shoeless equestrian”. 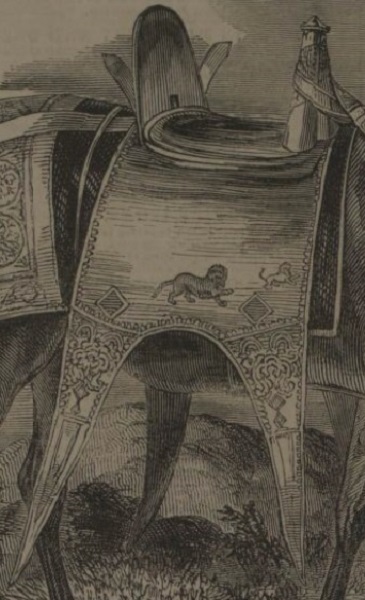 Several newspapers comment on the fact that “No subject is permitted … in the kingdom of Shoa, to possess one of the same breed”. I wasn’t sure at first if they meant breed in the sense of ‘an animal of this quality’ or whether only royalty were allowed to ride mules, but from what I’ve been able to figure out it seems to be the latter. This is not an uncommon rule.

Tishal was specially selected from Shoa’s royal stud to be the mount of the Prince of Wales (later Edward VII). I was able to find this photo of Tishal carrying his sisters, the princesses Helena and Louisa, in 1854. I was thrilled to find this and interested to see that she still retains the trappings depicted in her 1843 newspaper illustration. She’s also much smaller than I imagined from the drawing.

I have typed up the full text from The Illustrated London News (2nd September,1843) article on her:

Captain Harris, the celebrated African Nimrod and traveller, who carried an embassy from the British Government to the court of Shoa, in Southern Abyssinia, arrived in this country in the Oriental a few days since, bringing a blood mule from the royal stud, with various emblazoned shields, silver swords of office, pieces of armour, decorations for the warrior, female ornaments, costumes, peltries, and manufactures, sent as a present to Queen Victoria; together with with a highly illuminated scroll in the Æthiopic language, addressed to her most gracious Majesty by the Christian King, who traces his genealogy, through a long line of ancestors, to Solomon and the Queen of Sheba. In our last issue, the Court Circular noticed the delivery of these presents at Buckingham Palace, during an audience of her Majesty, to whom, after the Privy Council, Captain Harris was presented, by the Earl of Aberdeen.

The mule, tricked out in all its gorgeous trappings, was paraded a considerable time in the park, for the inspection of the Queen and Prince Albert; and we deem ourselves most fortunate in being thus enabled to present our readers with an accurate portrait of so rare a curiosity. “Tishal”, i.e. “without any rival”, was selected, we understand, from the royal stud for the especial use of his Royal Highness the Prince of Wales, and is as docile as she is beautiful. The colour is jet black, and the legs and ears are rather those of an antelope than of a mule. No subject is permitted, in the despotic kingdom of Shoa, to possess one of the same breed; and the furniture sent with it pertains equally to royalty alone. The saddle-cloth is of scarlet and blue, richly embroidered; the the high-peaked saddle, of green and crimson leather, displays the lion of Æthiopia on a swallow-tailed flap, reading mid-leg, so as to conceal the stirrup, which is a mere ring of sufficient dimensions to embrace the great toe of a shoeless equestrian. The head-stall, breastplate, and crupper are of correspondent colours; and a profusion of silver collars, bells, chains, and jingles, which cover the neck, complete one of the most beautiful caparisons we have ever beheld. The beautiful animal grazed on the cold green meadows at the sources of the Nile in February last, and has suffered nothing in appearance from her weary journey across the parched deserts of Africa.”

The article goes on to discuss the various spoils in less than PC language, along with the mention that the “barefoot King” of Shoa agreed to the emancipation of 7000 slaves, but there is no further talk of Tishal or mules in general.

The 1854 photo of Tishal is the last reference to her that I have been able to find. Did she travel to the Isle of Wight with the royal family when this photo was taken, or was she kept there full time? Did she remain at Osborne House? Is she buried there? I have reached out to English Heritage to see if there are any stable records of that time, and will update this article if I come across any new information.