At the end of October Ben and I traveled to the USA for a five day clinic with renowned horseman, Harry Whitney. It was a fascinating week and I will definitely write in detail about it soon, once I’m able to put a mule-related slant on my write-up; I was paired with a wonderful horse who shared a lot of Marty’s behavioral traits and everything I learnt will help us immeasurably, but I’d like to wait and share my thoughts on how the skills I worked on effect Marty and I directly.

“This town ain’t big enough for the both of us, pardner.” 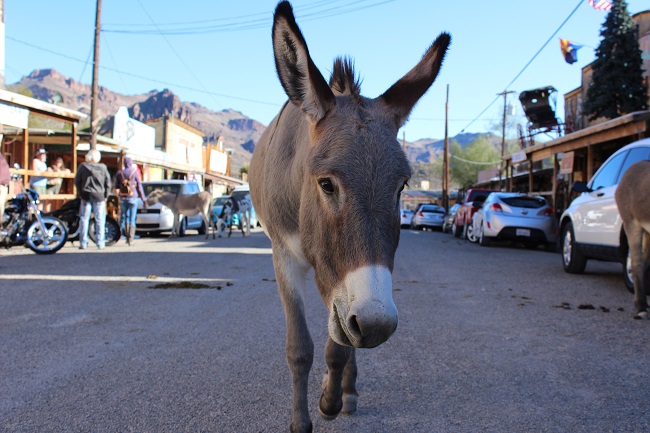 Nestled in the Black Mountains of Mohave County, Arizona, Oatman is a former mining town that sprang to life in 1915 after a ten million dollar gold find. It lies along Route 66, and approaching it from the east takes you along a very scenic (if slightly hair-raising) mountain drive. These days its population is significantly lower; it is “the ghost town that refuses to die”.

But the thing that makes it significant in my opinion are the wild burros that freely roam the high street and surrounding hills. Although these donkeys are happy to be petted and very happy to be fed (you can buy $1 bags of alfalfa cubes from pretty much any store), they are still essentially wild and caution must be used when around them! Dog owners are warned to keep their pets on leads or, ideally, not bring them out at all as donkeys – like mules – don’t tend to discriminate between domestic dogs and their wild cousins. If you choose to buy some donkey chow, I would recommend being aware of how many donkeys are around you; I made the mistake of not doing this, and within minutes of buying my bag of treats and feeding my first burro, I was surrounded by them. This was cute for the first 30 seconds or so, but then they ganged up on me and one of them ripped my treat bag and I quickly stuffed my remaining alfalfa cubes into my backpack before making a hasty retreat. This worked very well: the donkeys are exceptionally good at deducing who has treats/ice cream/other things that are easy to steal, and so long as you’re not openly carrying food they tend to leave you alone.

…Except sometimes, when they launch a heist on the ice cream parlour. 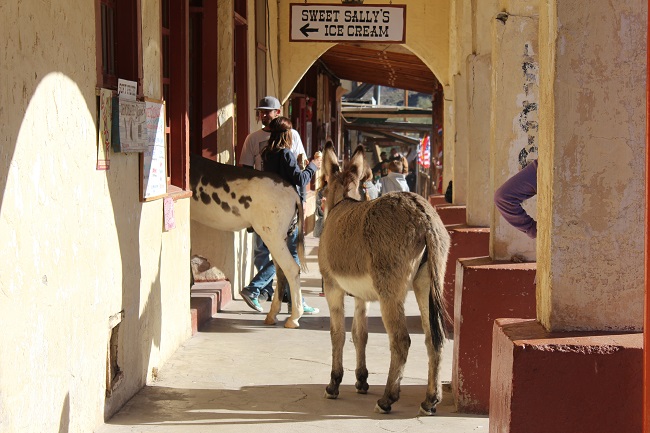 The burros are descended from those turned loose by early prospectors and are protected by law. Overall they appear in very good health; the alfalfa cubes, although perhaps not ideal for creating well-mannered beasts (I raise my hand as guilty, here), are better for donkey health than the carrots that used to be sold. The cubes are also a better alternative to junk food, and help to keep tourists from feeding completely unsuitable tidbits. Despite the handouts they were all a fairly good weight – particularly when compared to how many obese donkeys you see in the UK! Although one or two could have stood to loose a few pounds, there were no fallen crests or fatty rumps on the ones I saw.

Foals sport this fetching headgear, which I believe is also a new invention; simple, but effective! 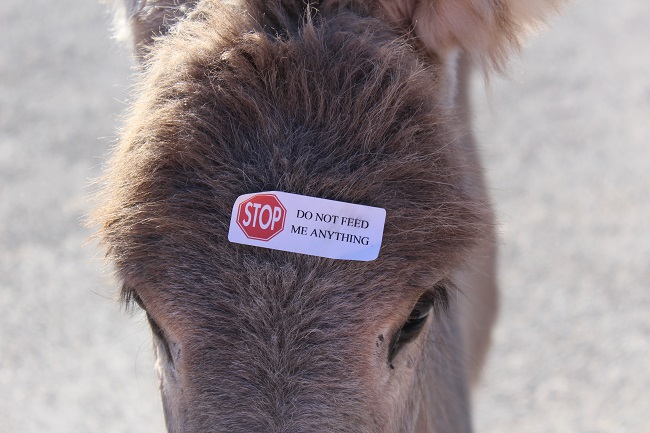 I was also excited to see how good their hooves were; having recently seen some feral donkeys with appalling feet in the New Forest, I was pleased to note that there was not an overgrown toe  among them in Oatman. When I voiced this, Ben pointed out that here they were roaming on ideal donkey terrain. Oatman has a high desert climate, and the footing is sand and rock – perfect for keeping those tough little hooves in good shape. 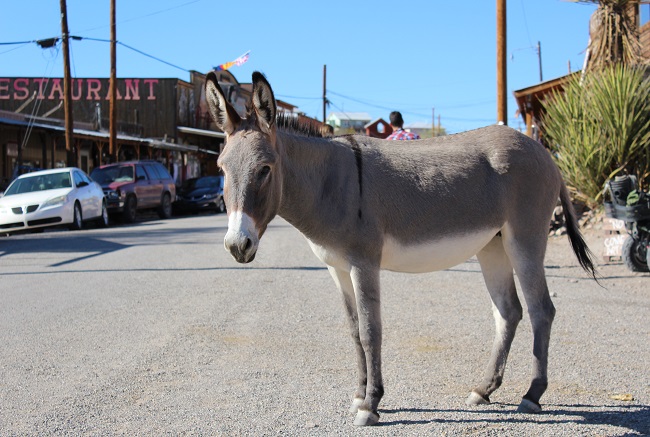 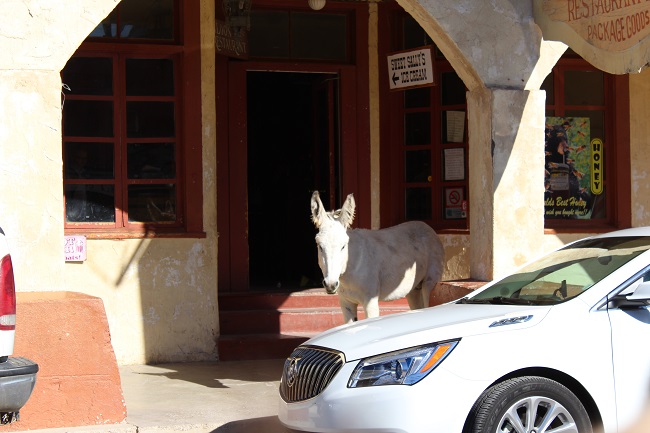 The donkeys have right of way; cars just have to go around them as best they can. The donkeys don’t even care when the road is blocked twice a day for a Wild West gunfight – they just amble on through, presumably safe in the knowledge that no bandit is tougher than a little grey burro. 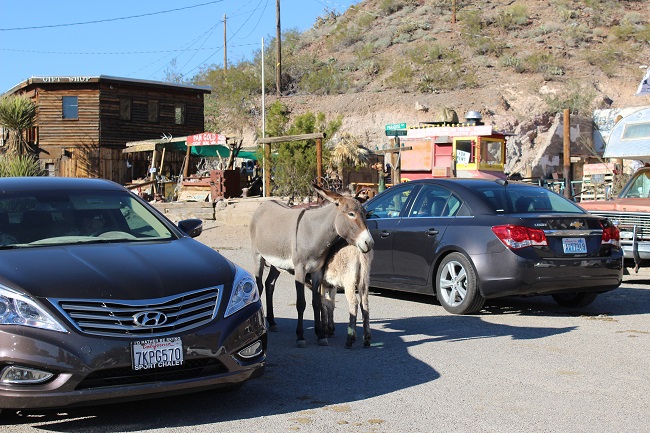 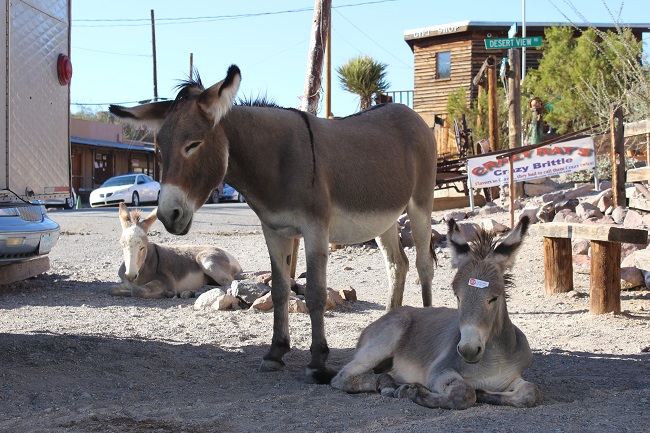 The Oatman burros were not necessarily a good study of Marty’s paternal heritage in it’s wild state, but while driving along a twisty mountain road at dusk one evening, having just left Death Valley behind us, I suddenly realised there were two medium-sized donkeys standing by the roadside. Ben put this down to my Long-Ear Radar (I had previously noticed a herd of wild burros grazing a distant burro-coloured hillside) as he hadn’t seen them at all, but I suspect it was more due to the fact that they were extremely well camouflaged, completely motionless, and I wasn’t having to concentrate on not driving the car over a 100ft drop.

As soon as Ben slowed down in response to my squeal of “Donkeys!”, the pair became instantly animated and spun 180 before taking off up the boulder-strewn slope. I was curious about this reaction when they’d appeared so calm and steady beforehand, but Ben explained that we had probably just witnessed the donkey way of dealing with potential danger – stand still, rely on your natural camouflage, and only run if you have to. I’ve seen Marty do this countless times, but it was interesting to see it in it’s ‘original’ form!

I can see where Marty gets his King of the World attitude from – donkeys know they’re badass. 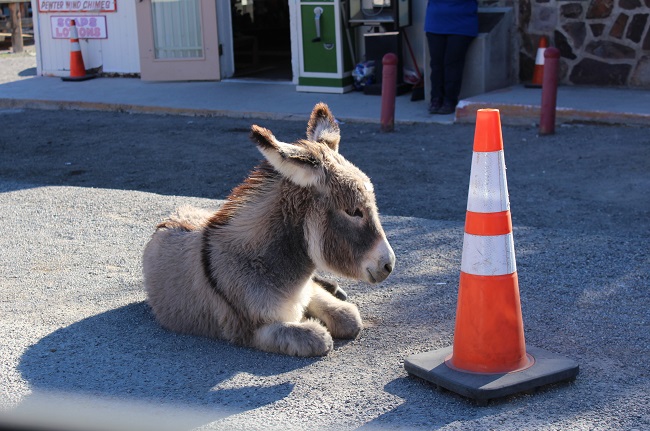 Harry (perhaps only half-jokingly) said that he believes everyone ought to work twelve donkeys and then twelve mules before they ever get to working with a horse – because by then you would have amassed such a huge amount of practical knowledge that a horse would seem easy! I can definitely see the value in getting to know more about this other side of Marty, and I’m very thankful to have had the opportunity to see at least a little of wild donkey life.