A few weeks ago I purchased The Mule Behaviour Problem Solver, a 2014 compendium of articles by seven of the big names in the mulemanship world: Meredith Hodges, Steve Edwards, Tim Doud, Chris French, Cindy K. Roberts and Red & Julie Wycoff. I’m only a third of the way through and it has already helped my understanding and added tools to my box, so I consider it a very good buy! 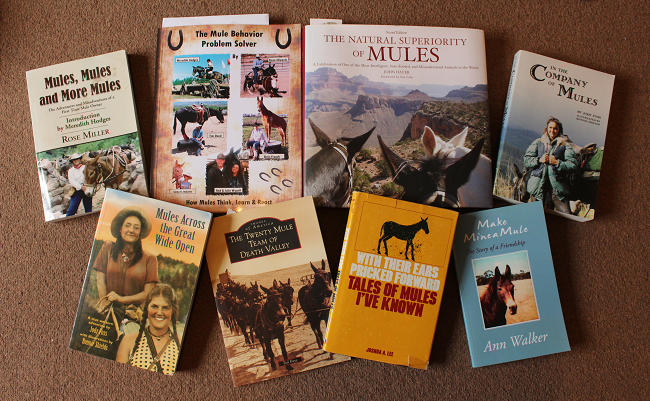 One of the first things it talks about is using the Replacement Concept when training mules. Basically, this is “replacing a mule’s unwanted behaviour with wanted behaviour”. Ben had already taught me this concept, but I guess it didn’t really click until I read the article. Sorry, Ben!

So for example, at the moment Marty is testing to see if my “head down before I take your halter off” rule still applies. I introduced this rule last summer, because he’d got into the habit of throwing his head back as I undid the halter, ripping free and charging off – a self-perpetuating problem caused by his dislike of the rope moving around behind his ears. The more he reacted the more the rope moved, and so it went. By lowering his head, it was easier for me to remove the halter and he appeared calmer. There was no more head-flinging and no more running off. He picked it up very quickly and, after a few sessions, had got to the point where I only had to think “I’ll take his halter off now” and down his head would go.

I had naively hoped that this would, in time, prove to him that movement of the halter behind his ears was not something to fear – but it’s clear to me now that I didn’t get anywhere near the source of his problem.

You can probably tell from his body language that he wasn’t quite ready for his halter to be touched yet, and had to do a little more circle work. 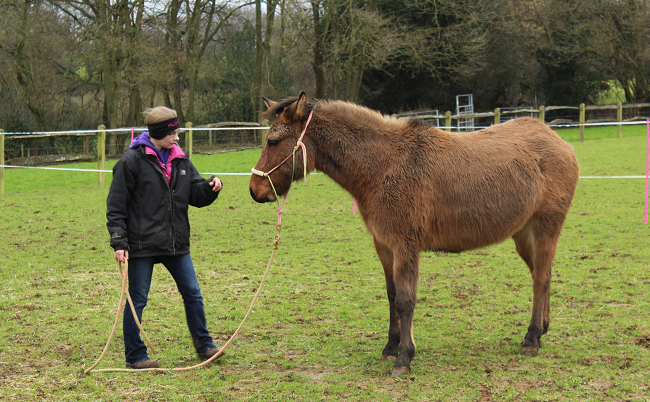 However, even with his potential physical problems in mind, I am continuing to work with him as sympathetically as I can without sacrificing our established rules. Marty is a very smart guy and he will happily take the slightest lapse and run with it, certain that this is the only way it’s ever been done and the only way it will ever be done! This will not make him any easier to handle.

If he gets stuck in the head-bobbing pattern, I will calmly ask him to do something else – perhaps circle work, perhaps step-counting, any small exercise so long as I change it every time. Otherwise, I run the risk of replacing one unwanted behaviour with another! I might work him for 15 minutes, or until he is calmer, and then I will give him some thinking space before asking again. The idea is that you are not punishing the mule – he should not become afraid to make a mistake – but you are showing him that it’s actually a lot easier to do the initial task. Interestingly, I’ve seen a lot more licking and chewing from him when I use replacement than I would normally see in our sessions together.

One ear on me, one ear on scary Ben. 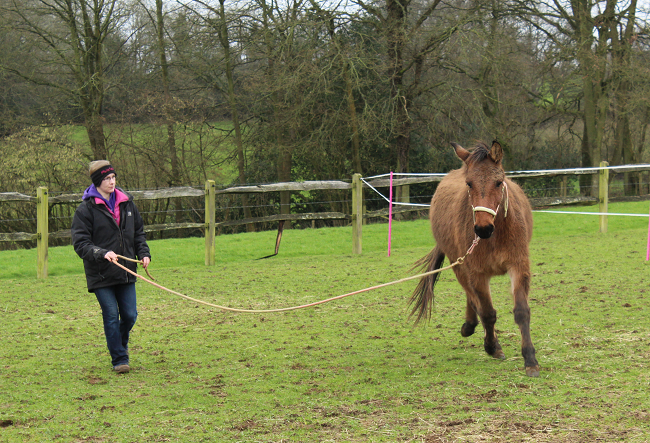 It’s a good exercise for me, too, as instead of becoming frustrated when Marty gets stuck in a cycle of unwanted behaviour, I am learning to view it as an opportunity to practice something else instead.

There was a sequence of photos like this in which mine and Marty’s legs were in the exact same position each time, so it looked like we’d just hopped down the field. It’s a talent I tell you! 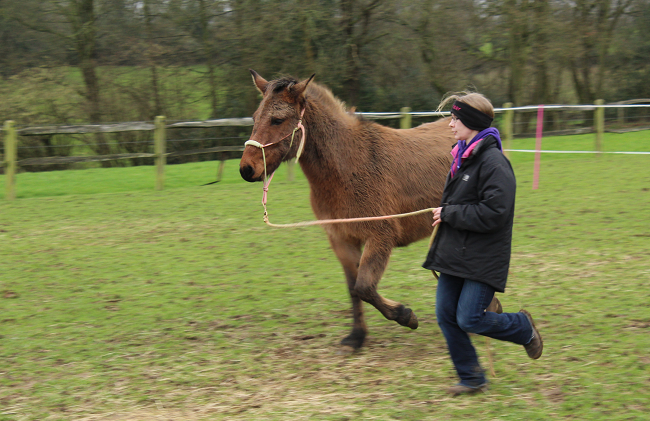 2 thoughts on “The replacement concept”