Some time ago, back when I still used Tumblr, I stumbled across an otherwise mule-free poem that contained a line about “Duldul, Ali’s white mule”. Naturally this piqued my interest and I had to find out more. It didn’t occur to me at the time that this might make a good article, unfortunately, and so I didn’t make a note of my sources – or the original poem! So this is by no means an academic essay, it’s just stuff I found interesting. Sometimes I get carried away when a topic seizes me and I don’t think about putting it to practical use until much later.

There are many mentions of famous, named horses throughout history, folklore and literature, but not so many mentions of mules. This is of course terribly unfair and I’m going to make it my mission to uncover and remember our long-eared companions of old.

This series starts with Duldul, the favoured white mule belonging to the prophet Muhammad. He may have owned several mules, but the only named ones I can find mention of are Duldul, the “first mule seen in Islam”, and Fiddah. Duldul was a molly and is described as being white or “greyish” in colouration. I couldn’t find any further mention of Fiddah’s sex or colour. Fiddah also lacks his or her own stories, although interestingly he/she shares a name with the prophet’s coat of mail which may have symbolic meaning. 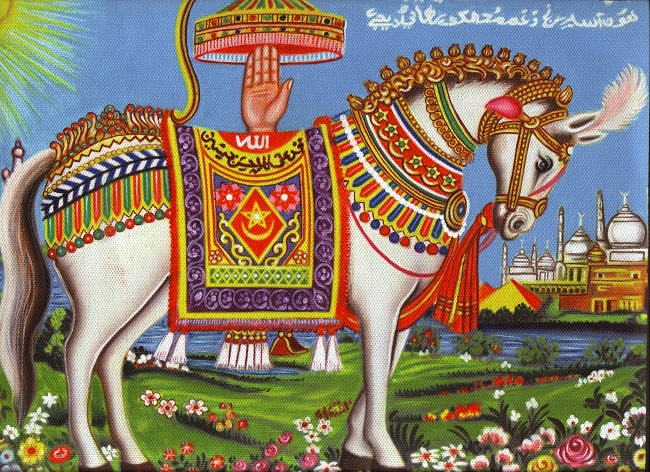 Finding any artwork of Duldul was very difficult. This is the only image I found, taken from a set of Islamic posters – and, although it appears to be linked to Duldul the horse, I think those could be mule ears!

Duldul exists in many different versions. For example, although historical accounts seem to concur that she was in fact a mule, once you get into folklore she is referred to as a horse – even a winged horse, according to the Uyghur people of the steppes! Kurroglou, the bandit-minstrel of Northern Persia, rides a great Arabian stallion named Kyrat who is reputed to be the great-grandson of Duldul (not impossible if Duldul, in this instance, was a mule; but highly improbable). I suspect this may be a case of prejudice against mules, which is sadly not just a modern phenomenon. The Arabian horse is perhaps seen as a fancier, more prestigious mount for a prophet to ride; although Arab owners have told me that their highly intelligent, independent horses have a lot in common with the mule!

Duldul’s name, also, appears to be up for debate. One source I found translated it to mean “porcupine”, which they suggested was due to her unusual gait. In Poetry and Mysticism in Islam: The Heritage of Rumi, it spoke about Duldul being linked to the word for heart, which is “dil”. It said that the mule’s good nature prompted many Persian poets to refer to the heart as a “Duldul”. To quote the 13th century Rumi: “It is a long way, and my soul is walking; but the heart can be doubled and turned into [a] Duldul”. Here, he refers to joining with a beloved in order to “double” the heart. Duldul symbolises “the strength or ‘mightiness’ that is gained through love, and which enables lovers to overcome all obstacles easily”. I personally like this idea a lot. 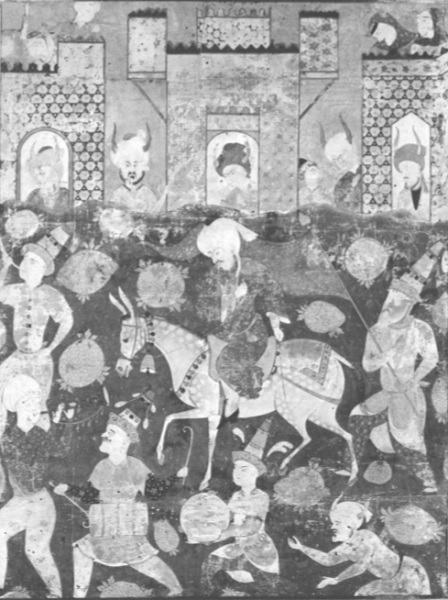 As mentioned, Duldul was the prophet’s favourite and he rode her into many battles. At Hunayn, a battle between Muhammad and his followers against the Bedouin tribe of Hawazin, he is reputed to have ordered Duldul to sit (although some sources say she “lay on her belly”). He then took a handful of sand and threw it in the face of his enemies, bringing about their defeat.

Duldul outlived the prophet and when she died she was “so old and toothless that in order to feed her the barley had to be put into her mouth”. As she “survived until the time of Mu’awiyah”, this means she was at least 30+ years old – depending on how old she was when given to Muhammad. Ali, as mentioned in the poem, was Muhammad’s son-in-law and Duldul was passed on to him, although exactly when in unclear. 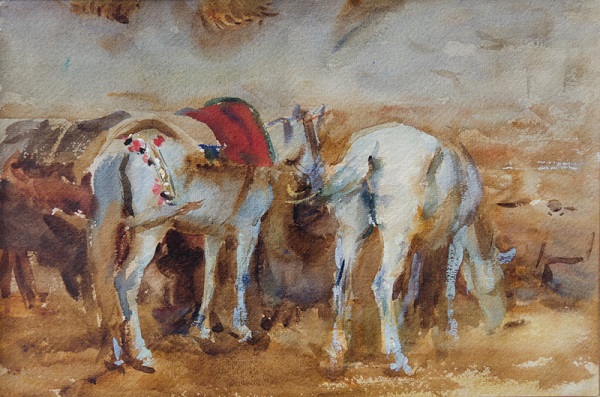 Duldul and Fiddah had been a gift to Muhammad from al-Muqawqis, the ruler of Alexandria. They were accompanied by a donkey called Ya`fūr, a descendant of the donkey ridden by Jesus into Jerusalem. There is a lot more information available about Ya`fūr, although no one seems able to agree on his colour: he was either white, or brown, or black! But he was an Egyptian donkey, and therefore very beautiful. He also had the rather singular power of speech.

He told Muhammad that he was “the last of his lineage, for Muhammad was the last of the prophets, and that he had been waiting for him and had allowed no one else to mount him.” Unfortunately tradition also holds that Ya`fūr committed suicide after the Prophet’s death by throwing himself into a well – but hadith studies (religious disciplines used in the study of the collection of reports of what the prophet Muhammad said, verbatim, on any matter) consider this to be unreliable data. Which is good news for us donkey fans.

I find the stories of Duldul and her fellows deeply intriguing. It is interesting to see that, at the start of one of the great world religions, is preserved the name of a mule. As mule owners, I think that is something to be proud of. 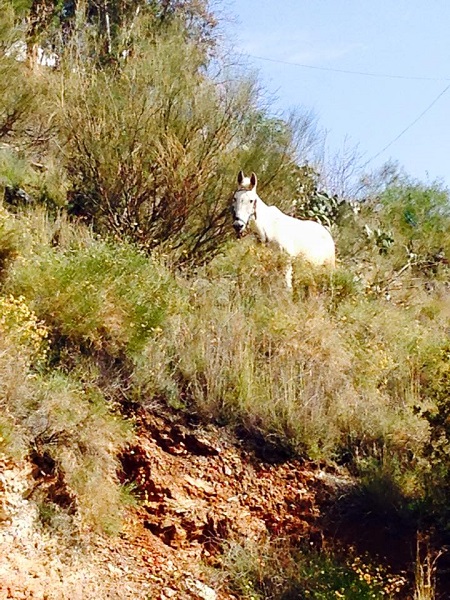 5 thoughts on “The Prophet and his Mule”