Saturday was the mule’s final session with Stacey. As with last week, it took place at liberty in the field and the mule was very eager to take part (although as the field sessions have mostly involved me giving him continuous scratchies on demand, I can see why he’d enjoy them!).

He was pleased to be shown a golden healer again, and licked and lipped at it gently when it was offered to him. Stacey suggested that I hold it in the palm of my hand and continue giving him scratchies. He started asking for the sides of his jaw to be rubbed, which is something he’s asked me for a couple times recently, and while I was scratching his face for him we noticed a small lesion on his gum. I haven’t yet been able to examine it, because he still hasn’t let me halter him, but it doesn’t appear to be causing him any great discomfort (he has no problem eating, and the only physical sign is the occasional request to scratch his jaw for him). However, getting the dentist out to him is something I really need to sort out. As far as I’m aware, he’s never had his teeth done. He was booked in to have them seen to last summer, but I lost my pony to colic a few days before and was too paranoid to risk him being sedated (mules are more likely to colic afterwards) – and there is no way he would allow any dentistry work without sedation! Can’t say I blame him, I feel much the same. 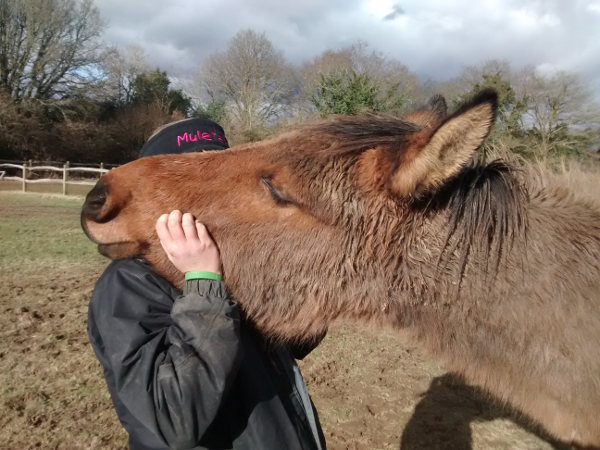 My other fear regarding the dentist is that, even with sedation, it will be hugely traumatic for him and his already fragile bond with me will vanish completely. Then again, I can’t freaking catch him anyway, so maybe this is the perfect time to do it! May as well give him a really good reason to mistrust me. Bahh.

I’m feeling very grumpy and self-pitying about this, can you tell?

Anyway. I need to stop talking about his trust, actually; this whole problem, according to Stacey, is due to a loss of trust in himself and nothing to do with whether he trusts me. I feel like this is a lot harder to fix than if it was the other way round.

Towards the end of the session, Marty did something rather amazing: he asked Stacey for butt scratchies. Ha! We laughed about it, because without context it seems like the most ridiculous thing to get excited about. But Marty doesn’t let anyone but me touch his tail or hindquarters, and it was his back end that he was most protective of during his first meeting with Stacey. So for him to very deliberately step away from me and (politely) reverse over to Stacey was really quite incredible.

Stacey discovered that he had been holding on to a memory of falling onto his backside – perhaps into a ditch, perhaps just into a trench in the mud – and becoming stuck for some time, as he was unable to get his hind legs into position for standing up again. I have yet to corroborate this with his previous owner, but I can see how that would link to the loose horse incident: both were occasions were he felt vulnerable and afraid, and both were occasions where he was completely unable to fight or run. Once she’d voiced this, Marty very calmly took himself off and began grazing. 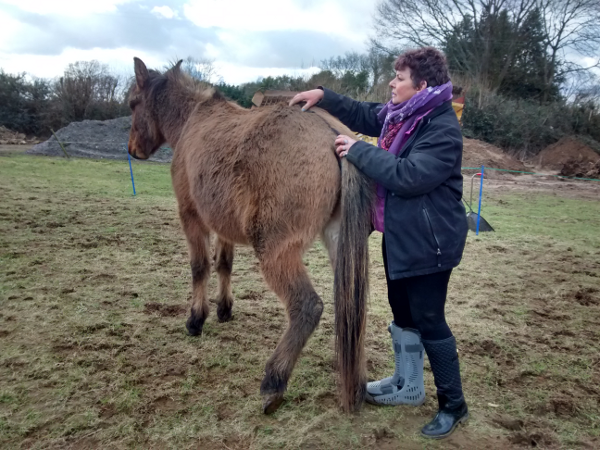 It has definitely been a fascinating three weeks, and I am very glad that I decided to contact Stacey on the strength of a Facebook comment. Whether you believe any of it or not, it’s undeniable that there have been definite changes since we began. I still can’t put a halter on him: that’s not something that’s been miraculously fixed. But that wasn’t really the point.

His relationship with Iris changed immediately after that final session. Whereas she had been happily sharing hay and feed with him, she pinned her ears and chased him off when I put their hay out following Stacey’s visit. This ‘putting in his place’ has continued, and he now seems to be looking to Cash for support – it’s Cash who he goes to when he doesn’t want me to catch him, and it’s Cash’s dinner that he keeps trying to steal! He and Iris still hang out and there isn’t any bad attitude between them, but it’s quite clear that something has shifted.

With me, he has become extremely affectionate and friendly and eager to hang out – so long as I’m not carrying a halter! He actually trotted across the field the other day to catch up with me. 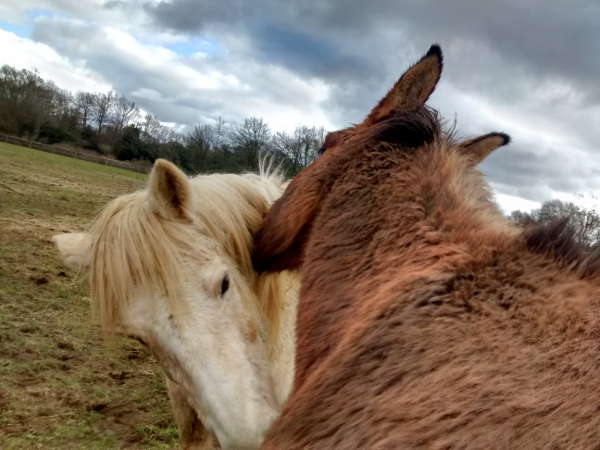 At the moment, I’m just hanging out with him. I tried to catch him on Monday and, like last time, he waited until I was half-way through haltering him and then ran out backwards. He’s not even putting on the pretense of being anxious about it now, though; it feels a lot like the mule equivalent of offering me a high five and then snatching his hand away at the last minute. Very funny, mule. You got me. Ha ha.

I’m trying to view this like it’s a physical injury. If I was unable to work him because he’d pulled a tendon, then I would completely accept that and be patient while I waited for recovery; I just need to treat this psychological set back in the same way. Of course, with a physical problem I’d have a vet telling me how long I could expect to wait for. With this, there is no time frame. It will just have to take as long as it takes.