When the subject of Marty’s catching issue comes up, I sometimes get sidelong glances and bemused questions such as: “Why don’t you just leave a headcollar on him/take a bucket of nuts out with you/keep him in a smaller pen?” The reason I don’t do any of these is because I feel that they are quick fixes, not solutions to the actual problem. It’s the problem I want to fix, not the symptoms.

However: one of the many things I have learnt over the last 19 months is that I need to be adaptable, and since November I have not been able to catch Marty on my own. As Ben works all week and we are short on daylight, this reduces our practical mule time to weekends only. It’s not ideal, so I swallowed my pride and spent most of Monday morning building a mule pen. 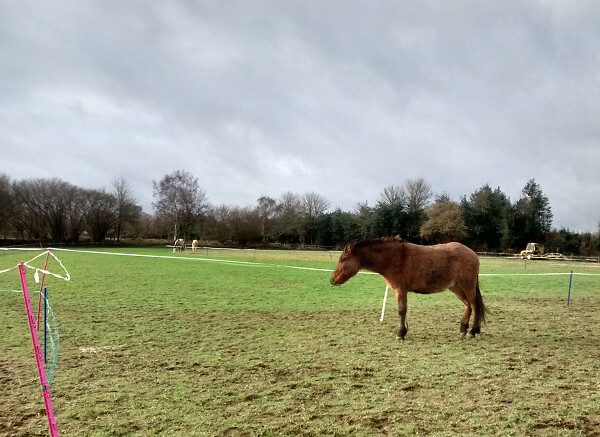 We keep our horses on a track system and so I have built the pen – with a high fence! – in one corner, the idea being that if Marty chooses to run I can send him round and have a smaller space to work with him in. It is not so small that he will feel trapped, but it is not so large that he can run away and ignore me.

I’d nearly finished building it when Marty, who had been grazing with the horses on the fresh grass I’d allowed them, suddenly left both food and companions and walked all the way around the track to inspect my creation. He stood for a few moments on the outside and stared at it mulishly, one hindfoot cocked; then he walked inside, giving me a cursory glance as he passed, and solemnly walked the perimeter – pausing every now and again to give certain sections a good, hard look. Once done, he approached and stopped a couple of feet away, just watching me. He didn’t want me to pet him because I was holding a fence post in my other hand, and as we all know I regularly beat him with fence posts (no I don’t) so he turned his head away and walked off.

I apologise for the use of phone photos, by the way; my SLR doesn’t fit in my pocket very well… 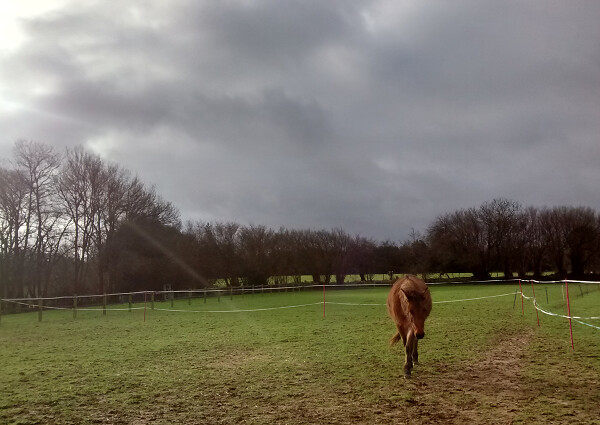 I recognised this as a Moment – the type of Moment with a capital M – in which I was being tested. Would I meekly cede my ground? Or step up and do something about it? I made a short, sharp “Chsst!” sound through my teeth and directed my energy at his hindquarters, which caused him to bounce forward and trot a few strides before turning in an arc and coming back to me. I was then allowed to pet him and, our experiment concluded, he ambled back to his grass and I ambled back to my fencing.

Everyone had to come and watch while I was altering fencing at the top of the field. 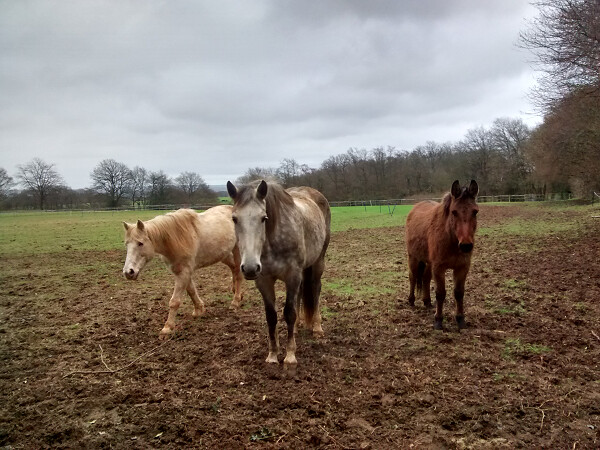 I thought at the time that his sudden and careful interest had been very deliberate, and that he’d understood the purpose of the pen; it seems I was correct, as I haven’t actually had to use it yet because he’s let me catch him in the main field every time! I don’t for one second think this will always be the case, because Marty loves to test his boundaries, constantly. But it was a really interesting insight into that ridiculously clever brain of his.