Marty’s third week at mule school began with some rebellion. This was to be expected, and although it was disappointing to see him say a very loud “NO!” to things that he had been doing easily for the past fortnight, I didn’t consider it as much of set-back as I would have in the past. Marty is incredibly smart and he still needs to be persuaded that what we’re doing actually benefits him – he will question everything before he finally accepts that we’re not total loonies. The answer is just to remain consistent.

Out and about at the weekend. 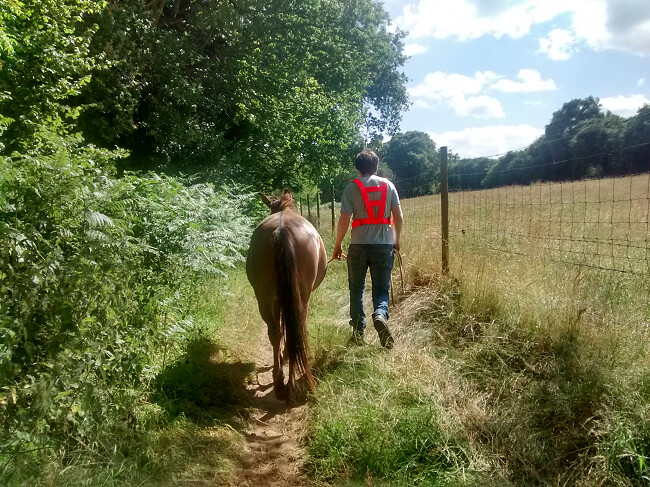 An example of his intelligence – and his capacity for badness! – involves his favourite game, ‘I Am Not A Number, I Am A Free Mule’*. I think I’ve mentioned that one of his techniques is to run into the horses, stir them up, then chase them round and round the field (and then expect them to act as shields between him and us. The horses do not appreciate this assumption one little bit). Iris and Cash are smart enough to take themselves off to a corner of the field when Marty is in one of these moods, as they know that I (or whoever isn’t catching the mule) will stand between them and the mule and keep him clear.

A week or so ago, while I was acting goalie, Marty ran away from Ben and came straight towards me. I wasn’t too bothered as he usually heads in my direction, but as he drew nearer I realised that he wasn’t thinking too hard about stopping. He had an odd look on his face: head high, eyes wide, ears and eyes fixed on me, and I realised that we were playing chicken. I held my ground and tried to block him with my energy, but he kept coming, my nerve broke, and I jumped out the way. Of course this was precisely the wrong thing to do as he immediately learnt a way to move me. He came round again a few minutes later, except this time I was furious with him and summoned up enough energy to stop him dead in his tracks and turn him around. 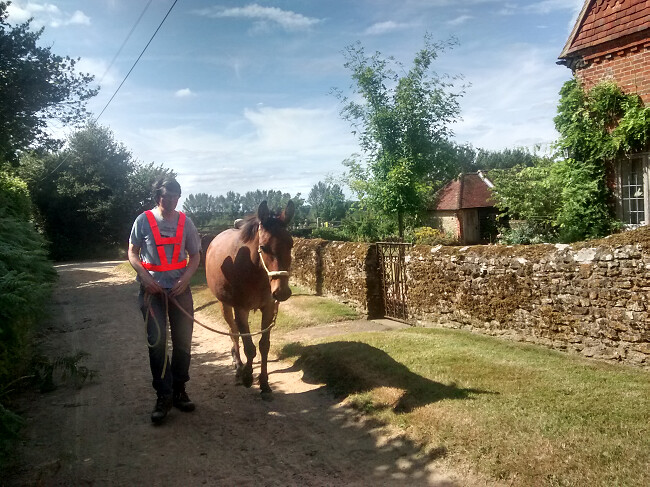 On Wednesday, he tried this method again … and, again, I was unable to block him effectively and got out of his way. As you can imagine I was very annoyed with myself, but it’s one thing to say “stand your ground” and quite another to actually do it when there’s a large animal bearing down on you.

So I took off my jacket and windmilled it enthusiastically at him when he came round again. This had the desired effect, and I was able to block him every time. I didn’t want him to feel that he couldn’t approach me at all, though; so I set it up so that if he came towards me at a run I would send him away, but if he dropped to a walk and approached quietly then he could stand with me and it would be peaceful. This was fine until he realised that he could approach quietly, stand next to me, and then try and push past to get to the horses! I corrected this immediately and I’m pleased to say that he hasn’t tried to push on me since; and although I don’t approve of his behaviour, I can’t pretend that I’m not a little bit impressed by it. He worked it out very quickly. I just wish he could use his powers for good…! Ha!

On Saturday we took Marty out for a half hour walk into the Punchbowl and back. We’ve been working on increasing the distance every time we take him out, in an effort to build his confidence up again. I think he genuinely enjoys these excursions as he steps out so well, but he has a tendency to allow his ‘cup’ to overflow – there are only so many anxious moments he can handle, and this is what we need to work on.

Making sure that the crossing is safe! 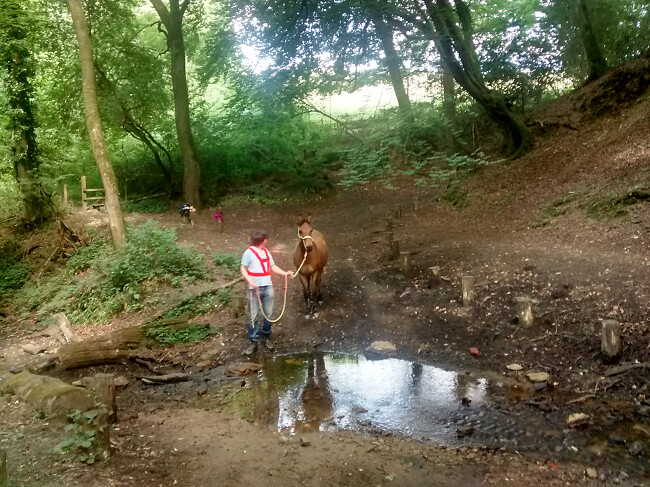 He did exceptionally well: the first hazard was at the ford, as there were small children playing in the water and their pony was waiting patiently on the other side. Marty stopped and had a good look, but that was all. After we’d crossed, a couple of horse riders came up the path behind us. The trail was steep and very narrow so we had to carry on and let them pass us at the top. Having them come up behind – particularly when they started trotting! – flustered Marty, but he listened to Ben and didn’t do anything other than try to stop and look a few times. After they’d gone, Ben did a few bending exercises with him until he was sure that Marty was listening properly.

At the top of the hill we did a circuit round a large field containing yearling foals, all of whom came cantering over to goggle at Marty, but the good little mule didn’t so much as break stride. I took over once we got back to the village, and almost immediately we found ourselves facing down an enormous tractor and trailer that came round the blind corner much too fast. The lane is single track and the tractor’s arrival was too imminent for me to turn Marty around in time, so I quickly put him in the most visible spot, stood in front and windmilled the leadrope in an effort to catch the driver’s eye. It worked and I’m pleased to say that we weren’t run over! Also, Marty didn’t react at all to my sudden outburst of energy, which is fantastic – in the past, he would have been unable to distinguish between energy that was directed at him and energy that was directed elsewhere. And despite this huge clanking monster suddenly appearing round the corner, he held his ground and did not back up until I did.

So overall, he is a very good mule – but you knew that anyway, didn’t you? 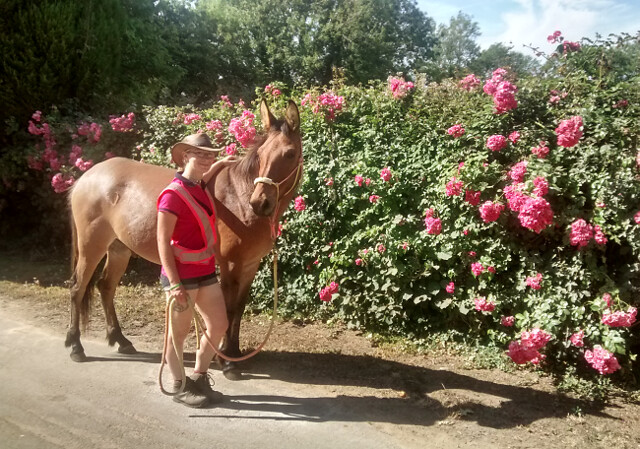 * Anyone who got the Prisoner reference can sit by me anytime.