A couple of weekends ago, our Friends From Down The Lane invited us over to have a go on their agility set-up. I roped Ben in as well so that I could bring both mules – agility is a fabulous thing to do with any equine no matter their discipline, and I was keen to do more of it with Xato now that we’re riding out. Although he’s a pretty unflappable guy, it doesn’t hurt to introduce new things in a controlled environment from time to time. I took Marty just because it was an excuse to take him out and do things with him. 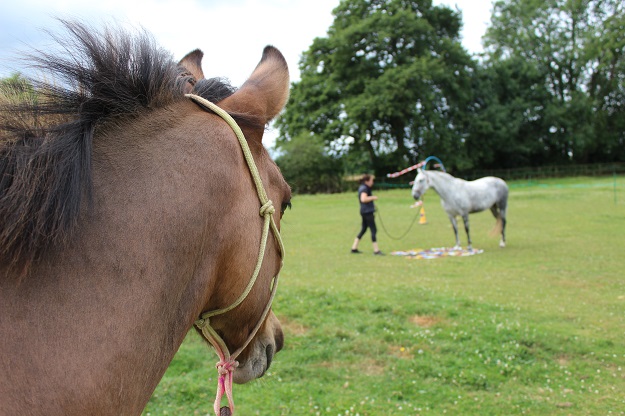 Back in November, we had an agility play day with Sue Gardner who came along with a bunch of equipment and walked us through how to approach the various obstacles. We haven’t done any since as I am terribly unorganised / have been broke all year and haven’t bought any equipment of our own.

As we both had mules, I didn’t photograph every obstacle but here is a bit of a photo series about Xato vs. the curtain. In the previous agility day, he was introduced to the curtain but never actually went under it as we didn’t raise it until later. We were unable to change the height on this one, but the main curtain was able to be removed which left just a couple of tassles on either side of the arch.

The thing I was most pleased about was that, after his first pass under the arch, Xato shot off but disengaged when he hit the end of the rope rather than feeling that pressure and just leaving at top speed. That was a really good change from him!

Marty also had a go at all the obstacles available – we walked through a square full of plastic bottles, weaved through cones, followed a giant inflatable ball around, backed up through the zig-zag, went under the arch, and crossed the tarpaulin.

It was a good day and I really need to get myself sorted and find some fun obstacles for ourselves. Marty thoroughly enjoyed coming out and doing things, and it was useful for Xato too.