Yesterday was mule’s day off. Although I’d planned to catch him/reward with grass before work, it was -7 and everything was frozen so I didn’t see any purpose in moving the fence just to give them more grass popsicles! I think he was quite disappointed by this, because when I went back in the evening he actually left his hay to stand with me and ask for his halter on. Sweet boy.

Today was bright and (relatively) balmy and, after the mule once again came over to ask for his halter on, I took him for a fantastic hike around the Punchbowl. It will be interesting to see what he’s like tomorrow, as for the past few days I’ve rewarded his catchability by either immediately taking the halter off again and giving him grass, or by removing halter/giving grass after doing something short – like grooming him. Today he actually had to do some work before he got his catching reward.

Anyway, Ben came with us on our walk, so I have a lot of pictures to share with you. I sure hope you like photos of fuzzy mules and incredible scenery, because that’s what you’re going to get.

Top tip: doing a chicken impression is a great way to persuade your mule to be caught. 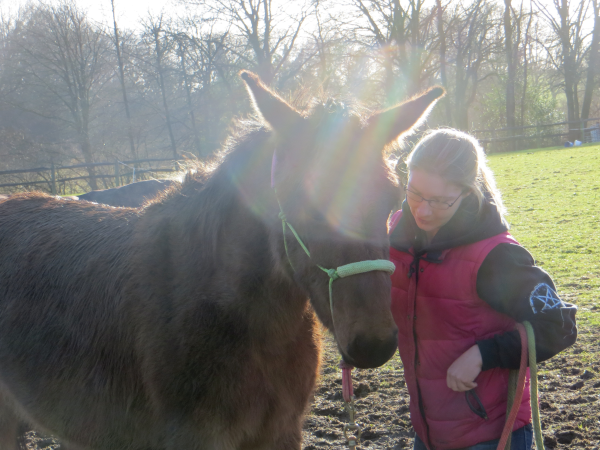 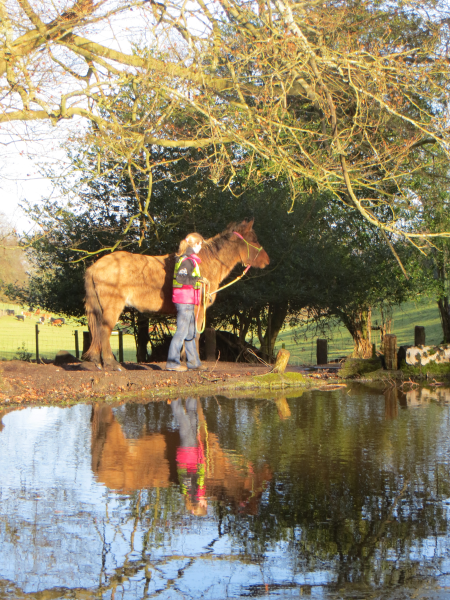 If he wasn’t next to someone wearing a hi-vis tabard, would you see this mule? You can see why his colour and markings suited his ancestors so well. 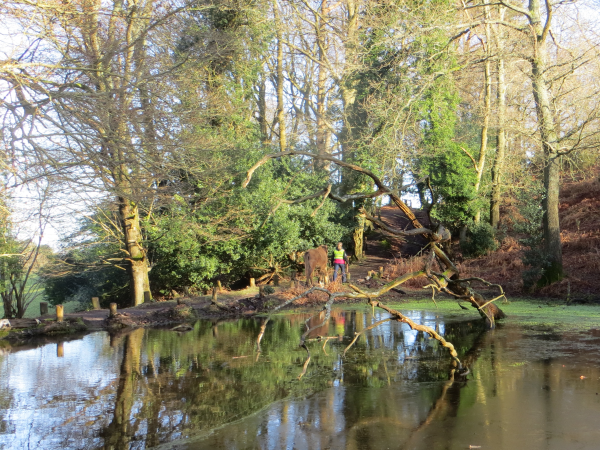 Part of the walk brought us out above the motorway, which mule has heard before but never seen. As you can see, he was on high alert and quite anxious, but behaved impeccably – the worst he did was freeze up occasionally. 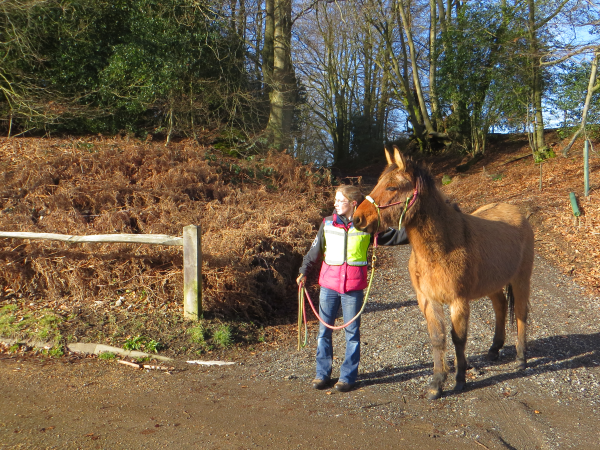 The motorway is only partially visible through the trees here, but it is still very noisy. We’re actually standing on the route it used to take, now partially returned to nature. 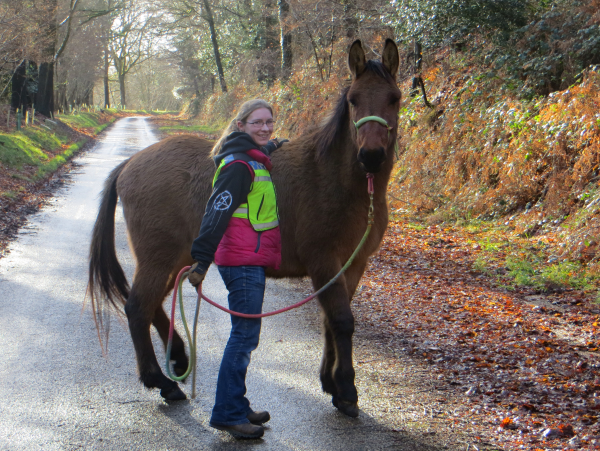 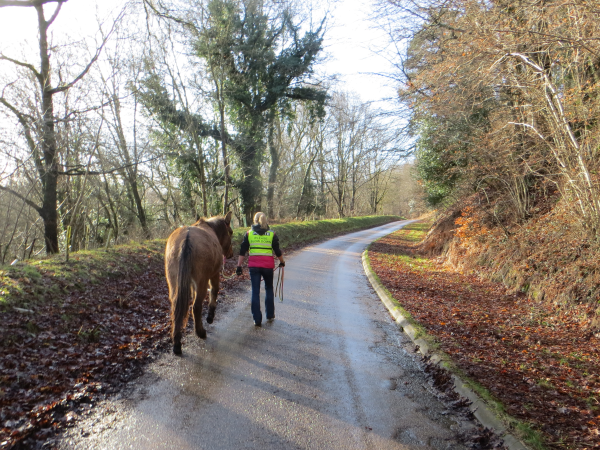 It’s a big world out there, mulo, but stick with me and you’ll be just fine. 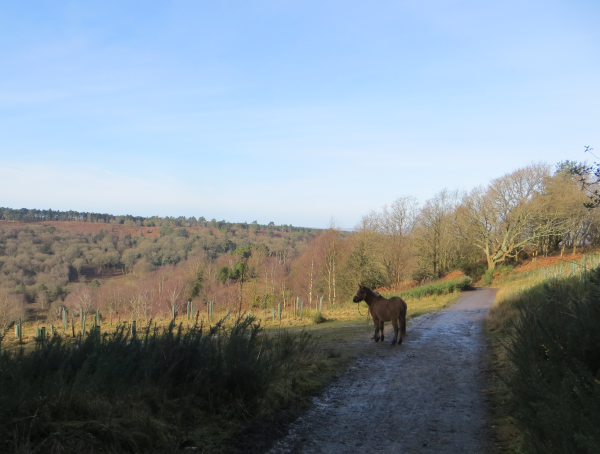 This is another part of the old motorway, now returned to grass and providing us with a fantastic balcony view of the Punchbowl. 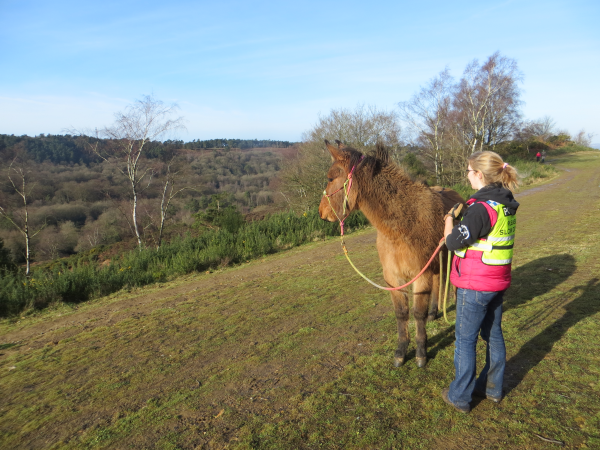 There’s a paved path on the ridge above us, and mule has spotted a cyclist. 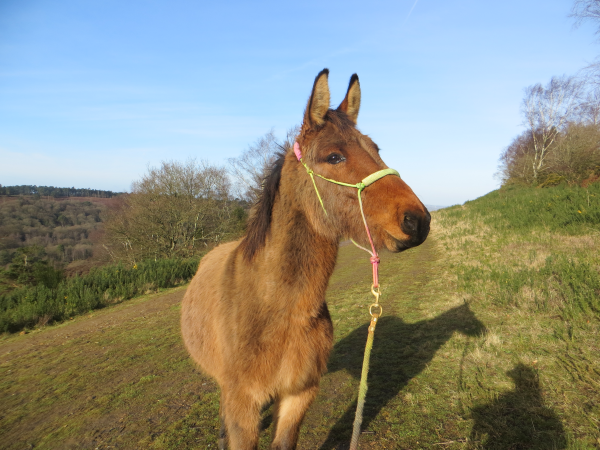 If we’d stayed on the grass track we’d have come out by the cafe, which would have been a nice walk but would have also taken us into a fairly busy area – and I didn’t think mule was up for that, yet. He’s developed a slight anxiety regarding dogs, and I didn’t want anyone getting kicked (although I could argue that people should keep their dogs on leads if they don’t have adequate recall…). Instead, we clambered up this steep bank with a big step at the top. Mule managed it perfectly. 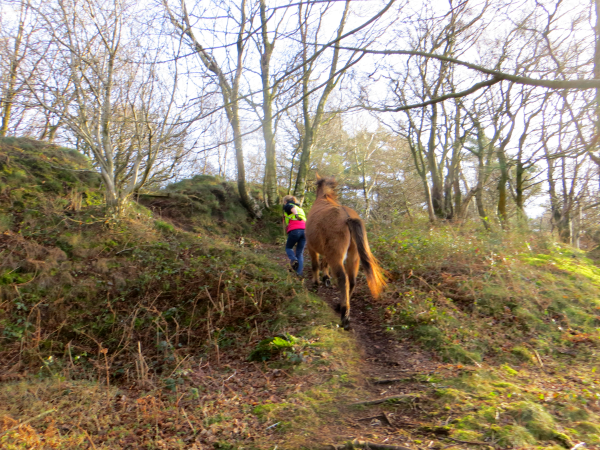 Then on to another climb. Mule grabbed a snack on the way past and his breath smelt pine fresh for the rest of the walk. 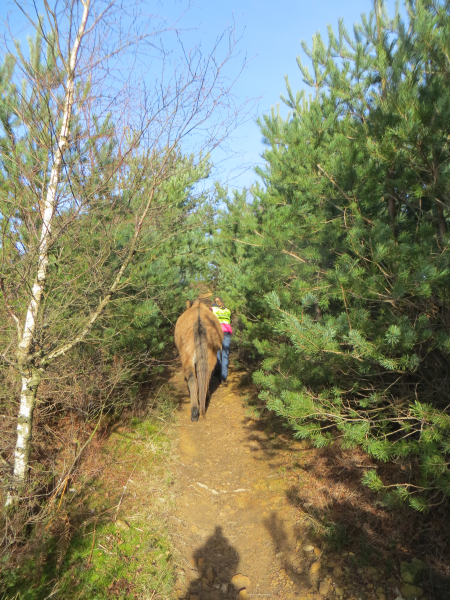 You can’t really see it here but there were some big steps on this track, too. When we came out the other side we found a sign saying ‘No horses’, but he’s only half horse so I think we can just about get away with it…! Oops. 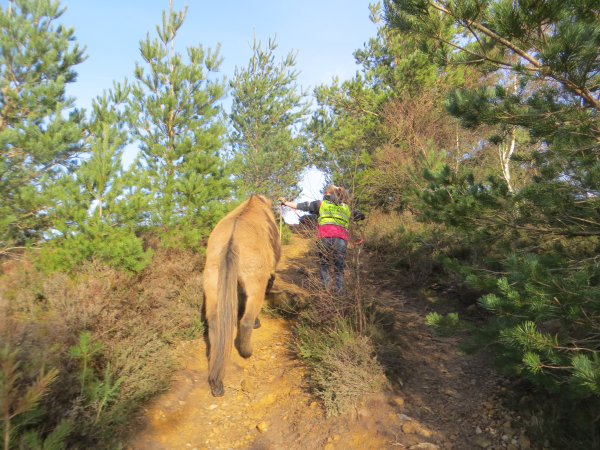 But what a view at the top, huh? 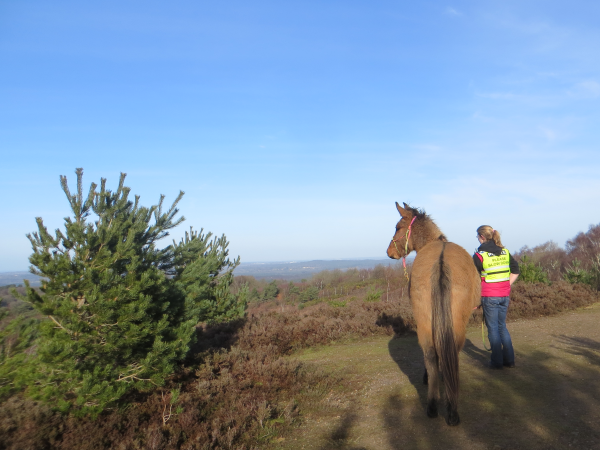 I was trying to get a majestic headshot of the mule surveying his kingdom. I got this instead. 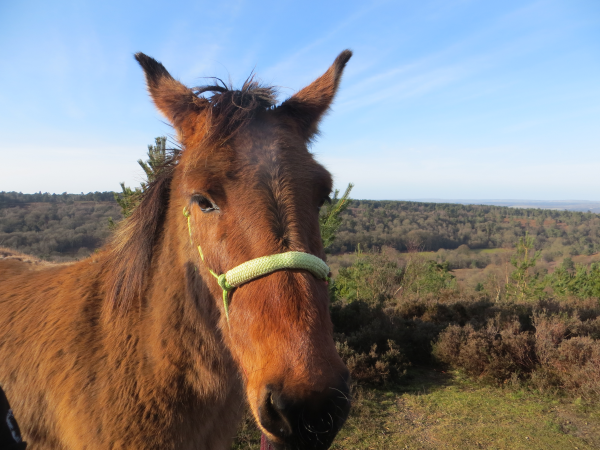 On the way down, mule got bored of walking behind me and decided to pick out his own path instead. He does like climbing on things. 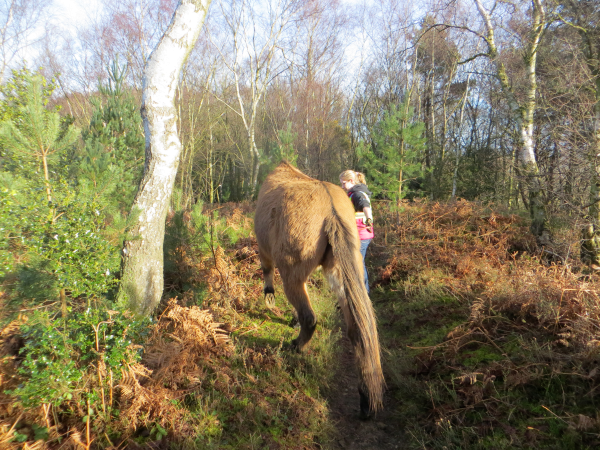 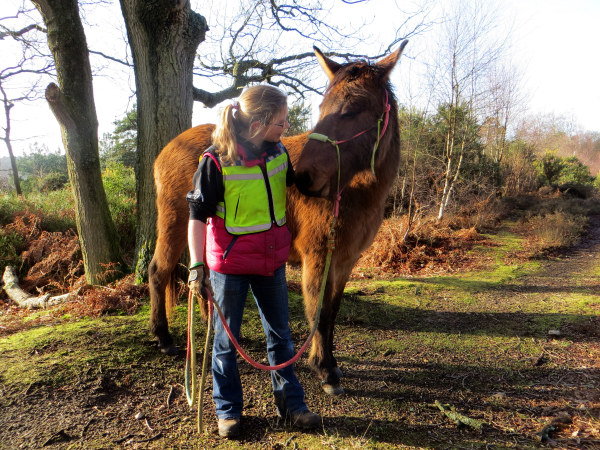 Oh look – once again, mule has found something he can climb onto and pose on top of. 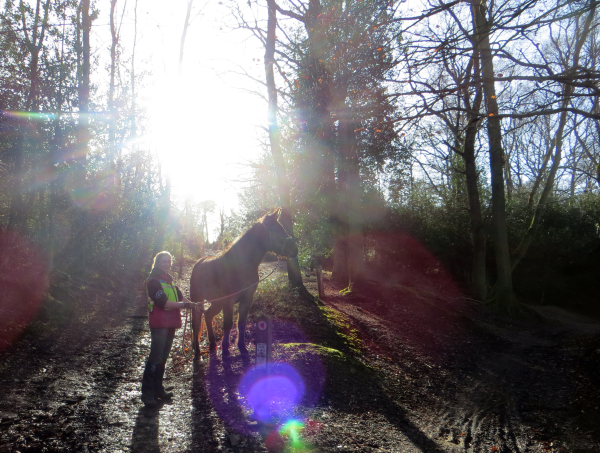 And again. Dude does it on purpose, I swear. 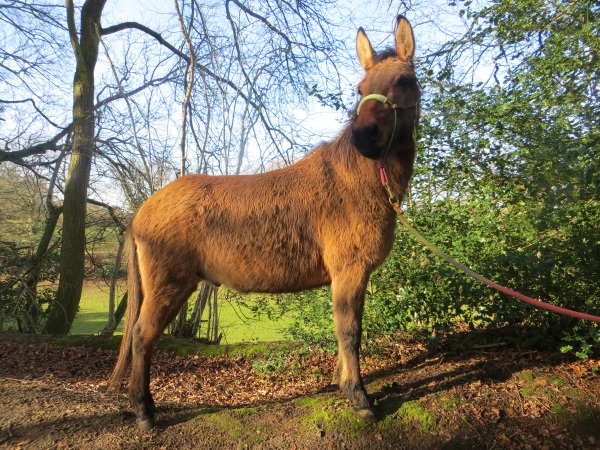 So basically, in summary, my mule is awesome and I love him very much. 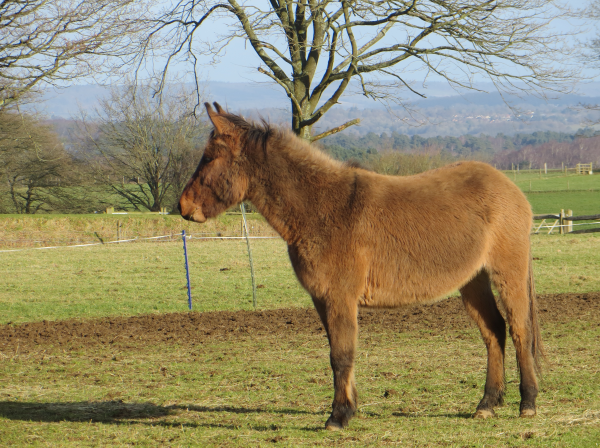 How could you not love that cute little face? 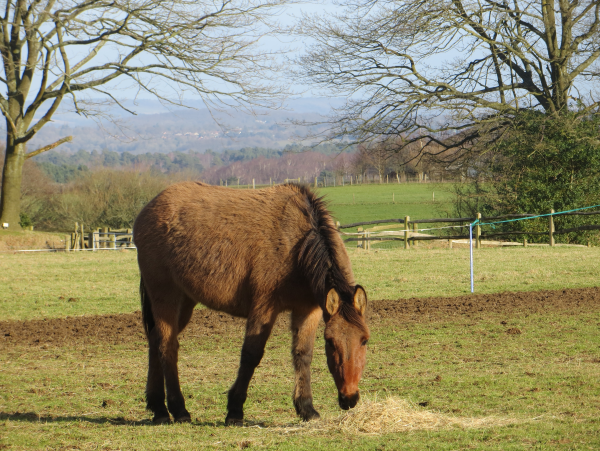